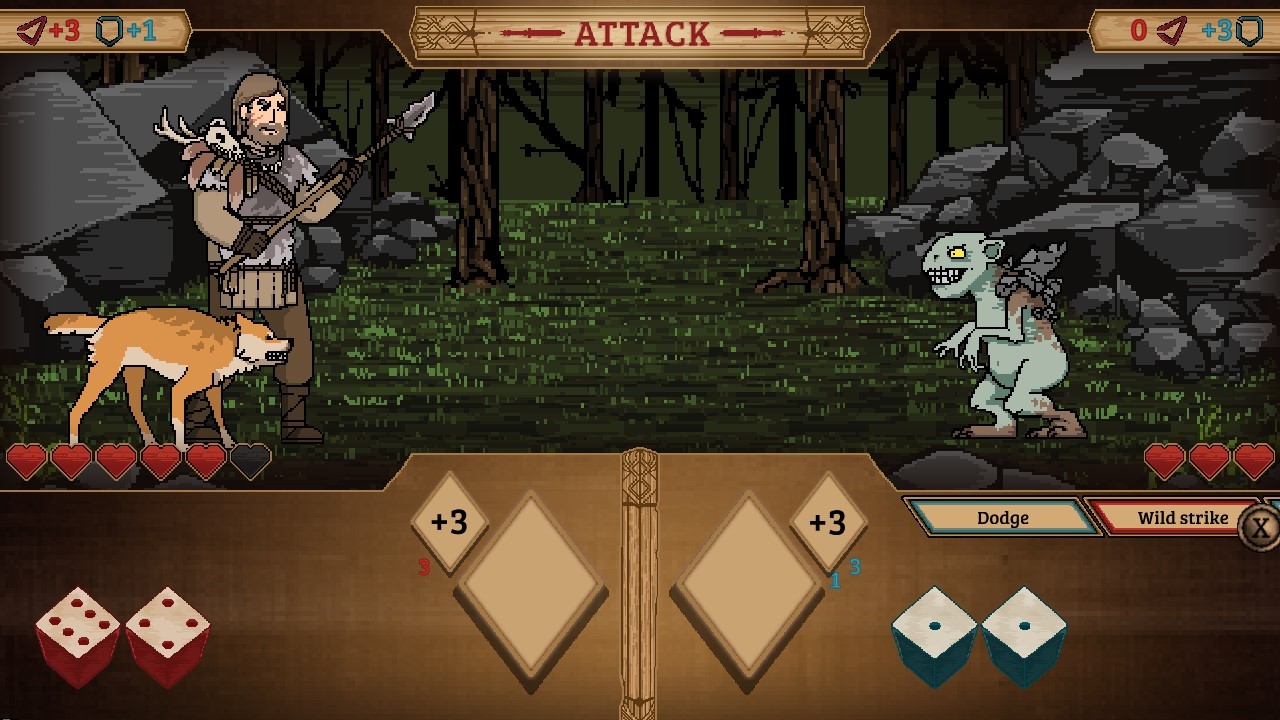 Many games have attempted their own takes on mythology. God of War flips Greek (and Nordic) mythology on its head. Dante’s Inferno attempted its own grotesque take on the “seven circles of hell”. Please the Gods aims to achieve the same thing with its version of Finnish mythology.

It’s unclear where the game takes place. All the game tells us is that you’re a villager looking for the three fragments of Sampo, an object that brings riches and good fortune to the person who possesses it, in order to aid his starving family. This is explained through an exposition dump at the beginning of the game. After, the only semblance of story you have is the occasional dialogue from one of the three gods you help in order to find the fragments of Sampo.

There’s not much to the story. In fact, I’d describe the story as one giant fetch quest. Sort of. Every location you visit is because one of the few characters in the game told you to go there. Every boss you kill is only killed because a god said so. Sure, it makes sense story-wise, but the “dialogue–>journey–>boss” formula gets stale quick.

And, no spoilers, the ending is anything but satisfying. It’s so anti-climactic, that I ended up staring at the screen of my Switch for the next 5 minutes.

Fortunately, the actual gameplay exceeded my expectations. The majority of the game takes place on an overworld map, where you’ll move from node-to-node in order to progress to the next boss fight. These nodes offer different experiences, too! One node may give you the chance to hunt a rabbit, while the next node pits you against a colossal black bear.

These nodes contain one of two options: events or combat. Events are presented through text and include events such as hunting, fishing, foraging, and vice versa. These events grant you food, health, buffs, and various other things. 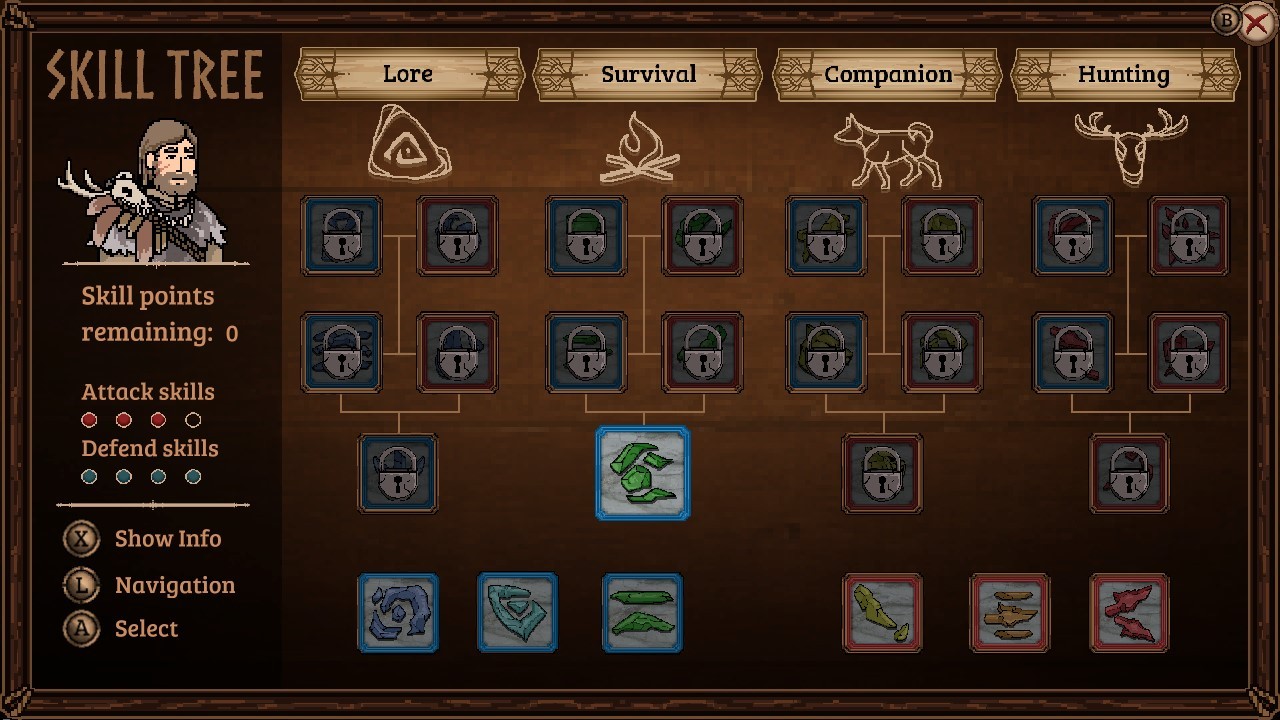 RNG is a big part of this game, so each event goes through a skill check. If you succeed, you successfully hunt the rabbit or lure a fish. Fail, and you get nothing. In some events, failure may mean you receive a debuff!

Your survival depends on succeeding these skill checks. You need food to travel through the overworld, or else your character will starve. Attack & defence buffs are crucial for some fights. Point is, you better pray to the gods that you pass these RNG skill checks.

Now, let’s talk about the combat. Like I said, RNG is a big part of this game, and the combat is no different. The game uses a turn-based combat system, but with dice thrown into the mix. Both parties in the battle go back-and-forth between two stages: attack mode and defence mode.

Basically, RNG is king, and a fight’s outcome will be determined by how high a roll you can get. Fortunately, there are skills in the form of cards that improve your chances of survival. Some of these cards give you an extra attack point, some improve your defence, some give you an extra die, and some get rid of any debuffs you may have.

There are four, short skill trees in Please the Gods that give you more attack/defence cards. However, I noticed that most of these cards aren’t needed. I beat the game with most of the beginner cards, only switching out one or two throughout the course of the game. I would’ve liked to see the “endgame” cards become more useful.

One big reason for some cards not being all that useful is that RNG reigns supreme. If you roll a 2 and your enemy rolls a 12, it doesn’t matter what cards you have—they’ve won the turn. No card will change that outcome.

It’s not a bad system, just heavily reliant on RNG. What hurts this combat system is the game’s checkpoint system. If your success relies on good RNG, you need to have a decent checkpoint system, since some losses may not have anything to do with the player’s skill. When you die in this game, you restart from the beginning of the quest you’re on. This means going back and doing every skill check and battle again.

The checkpoint system is my biggest gripe with this game. In a game where battles can take 1 minute or 6 minutes, I don’t want to have to redo all of it just because I couldn’t roll a 6. It’s inconvenient and hurts the game 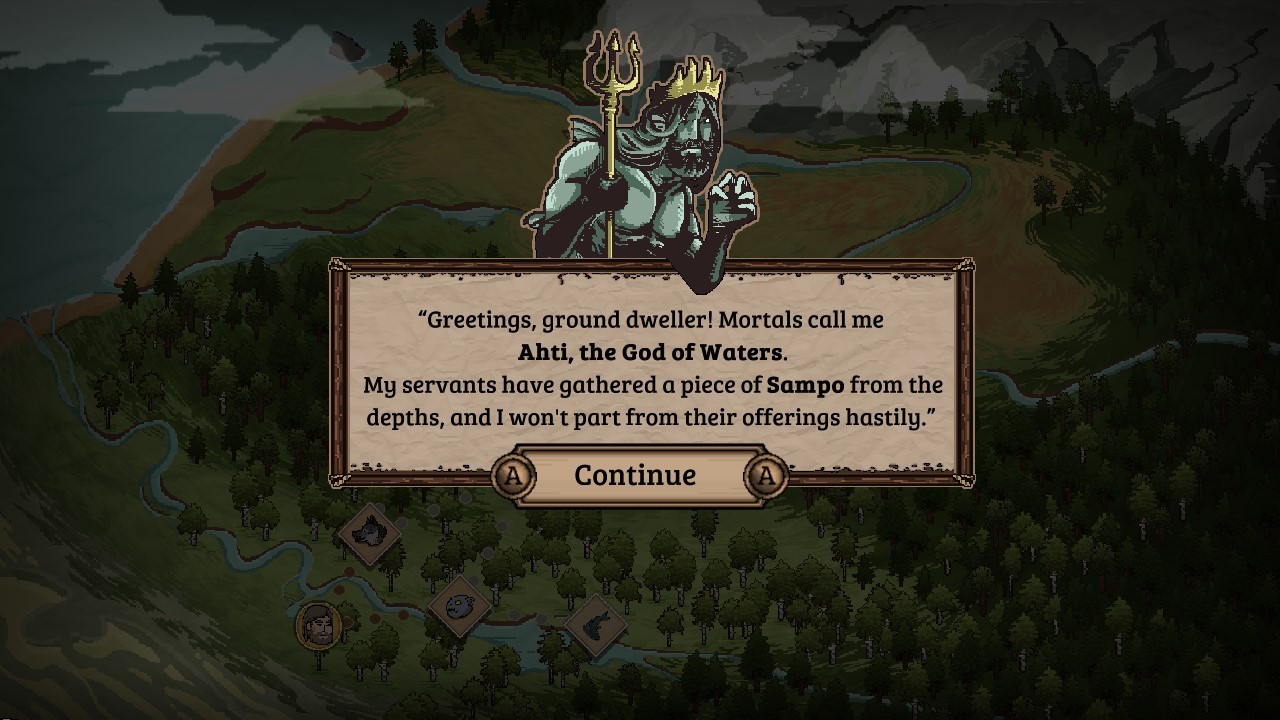 While we’re on the subject of things I didn’t like, let’s talk about the sound design. It’s not bad, but it’s mediocre. I’m writing this review a day after beating it, yet I can’t recall most of the music or sounds in Please the Gods. The sound design is, for lack of a better term, forgettable.

On the positive side, the graphics are gorgeous. It’s a simple art style, but it works in the game’s favor. Every creature looks unique. Every character has a distinct style to them. I would find myself scared of some of the enemies because of how detailed they were. I give the developers props for making a such a gorgeous game.

Finally, let’s talk about the length of the game and how long it will take you to beat Please the Gods. I beat the game in one sitting over the course of three hours. For $10, that’s about what I expected, so I’m not disappointed there. However, I don’t think there’s much replay value to be had in Please the Gods. Not much changes, and the game isn’t interesting enough to hold my attention for a round 2.

Overall, I enjoyed my time in Please the Gods. However, with a boring story, mediocre sound design, and a less-than-optimal checkpoint system, Please the Gods just barely becomes worth the $10 asking price.

A lost artifact, a village on the brink of starvation, and a set of dice. Time to please the gods.