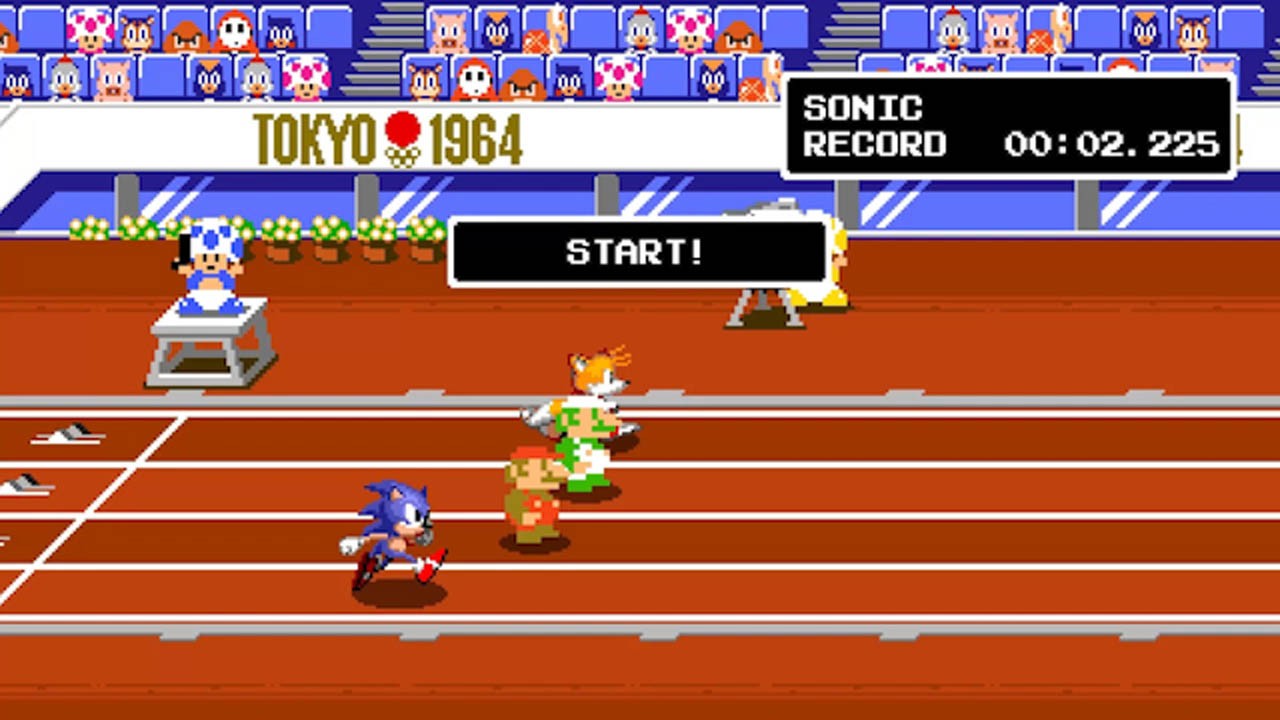 It’s an important sports event of the year, no, not the World Cup…yet – the Olympics. Held every four years, the sports world has been blessed with the addition of new events and new personalities. The likes of Dr Eggman, Donkey Kong, Tails and of course, Mario and Sonic, will all be making an appearance this year. Unfortunately, this isn’t the actual lineup of the real event in Toyko 2020, but Mario & Sonic at the Olympic Games Tokyo 2020.

Mario and Sonic crossovers have happened quite a bit over the years. Former rivals, Sega and Nintendo managed to patch things up and work together. Once the Sega Dreamcast sadly passed away (I don’t want to talk about it), Sega remained in the software domain and pumped out quite a few titles that worked pretty well on Nintendo systems. This isn’t their first take on the Olympics, Mario & Sonic at the Rio 2016 Olympic Games was a thing, but I never got around to playing it; instead, I just watched the actual games on TV.

In anticipation for this year’s games, as much as I’d like to see Mario doing the 100m on my telly, I’m reserved into thinking that Mario & Sonic at the Olympic Games Tokyo 2020 is the next best thing. From my experience, athletic type games haven’t fared well on consoles, and I can’t think of any standout titles to quote – that’s the point. Considering the variety of games, you’d think there would be a bit more choice, but it’s down to the controls or lack of glamour, perhaps, in the collective gaming event. It would take a lot to knock California Games off its perch.

Mario & Sonic at the Olympic Games Tokyo 2020 already has a safe roster – you have Team Nintendo and Team Sega, so it caters for a wide variety. You needn’t pledge your allegiances, but I have to go with the plumber on this occasion, though Sonic clearly has an unfair advantage when it comes to the sprint. Although, maybe it’s a case of the Turtle and the Hare as Sonic is too busy being touched up (steady) once more, in preparation for his live-action movie? Let’s not go there. 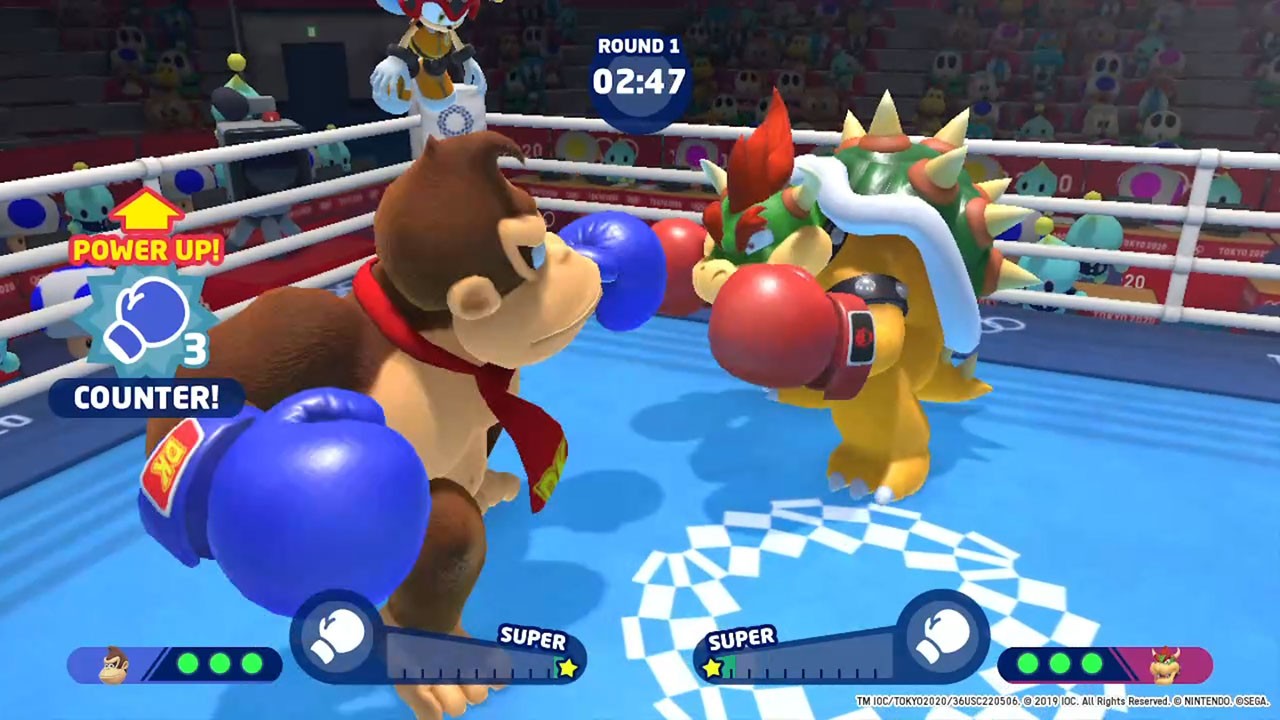 So, here’s the underlying story. Bowser and Dr Eggman have created a games console called the Tokyo 64, and its sole purpose is to trap Mario and Sonic in the game so that they forever compete in events back in the year of 1964 – the first time Tokyo held the Olympic games. When the console gets activated, both Mario and Sonic get pulled into the game, but so do Bowser and Dr Eggman. The remaining allies need to chip in together to work out how to get their friends back. I’ll let you digest all of that and come up with your own opinions. Take a break and come back to this review in a moment.

Welcome back. Perhaps we agree that a story isn’t necessary as it’s a sports game. That said, it’s a perfect Nintendo and Sega crossover for merchandising and beloved characters, so I don’t doubt that there will be fans who lap (see what I did there?) up every last surreal minute of it. It’s not bad; it just seems unnecessary as Mario & Sonic at the Olympic Games Tokyo 2020 works perfectly well as a quick-fire multiplayer game. But some of the dialogue does drag a little, and is also somewhat repetitive.

There are 21 main events in Mario & Sonic at the Olympic Games Tokyo 2020, four of those are new events; karate, surfing, skateboarding and sport climbing, plus there’s the addition of three Dream events. These were the pull of the last iterations of the games, but I have to say they were a bit flat. There’s racing, shooting and karate, but they’re all pretty forgettable from my experience and feel like they were added to pad the game out. Gameplay felt repetitive, and with the shooting game, in particular, it was like playing a demo of Splatoon, only with the background setting of Japan.

Karate and archery were a standout for me. While the fighting element of karate was nowhere near the actual event, there was something fun and almost tense about facing off against another character. I would be quite keen for a spin-off title like this, and before you mention Smash Bros. Ultimate, the fighting element is nothing like it. Besides, in the kumite, you can see what’s going on, and it’s not a free-for-all. New additions to the games are fun. The skateboarding section is particularly strong but not a standalone game and while it doesn’t reach the height of The Legend of Zelda: Breath of the Wild, the controls were quite fun and didn’t feel like the button-mashing experience that comes with the retro section of the game. 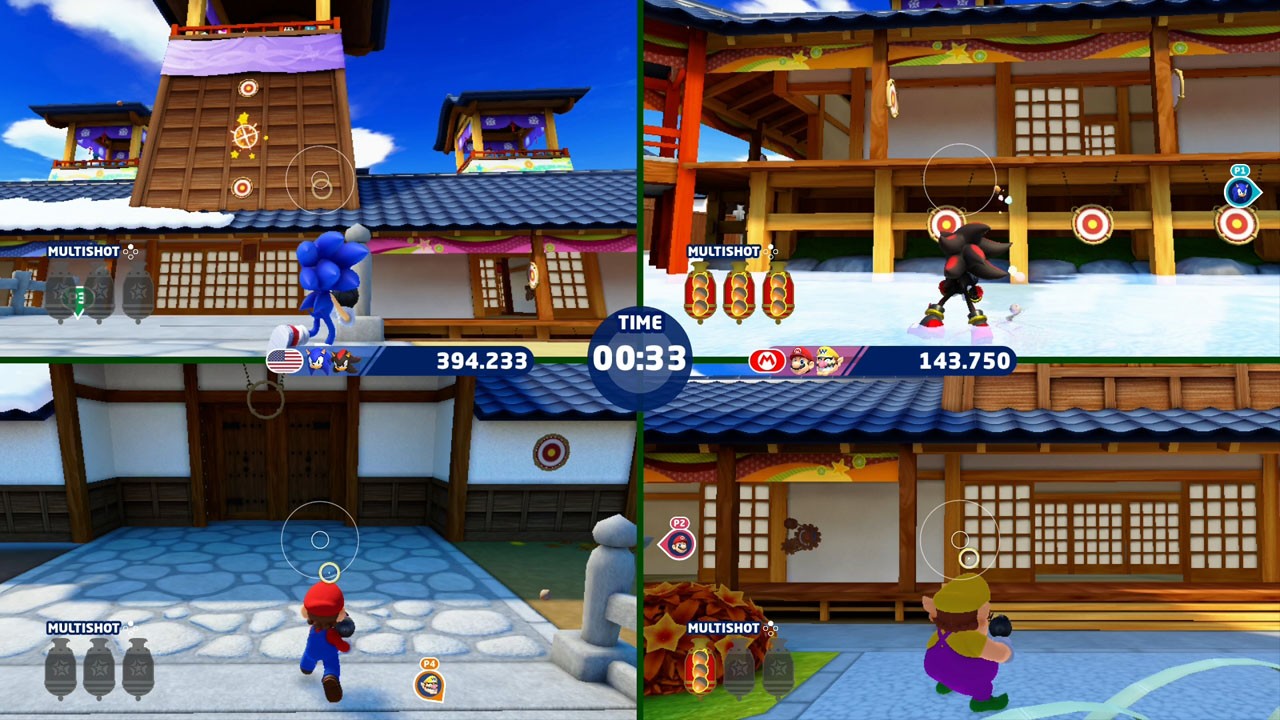 In the Tokyo 64 games, there are only eight characters to choose from. While this is a fraction of the 32 playable characters on offer in the main game, it’s about six more than you get in similar titles from the retro era – you were either player A or B. If you’ve played any of the athletic games from back in the day or on a retro device, you’ll be very familiar with Track & Field by Konami. For all it’s simplicity and flaws, rebooting this style of play into the Tokyo 1964 section was a lot of fun and I’d say that it was my favourite part of Mario & Sonic at the Olympic Games Tokyo 2020. The commentary is fun, and there are even visual effects that make it feel like you’re playing on an old CRT (granted, this isn’t accurate when it comes to 1964, but who’s judging?).

There are no extras – no new costumes, no additional characters and while you’ll earn achievements, there’s no real record of them for you to tick them off as you go. In summary, then, there’s no incentive to replay the game unless you actually like the mini-games. That’s good enough for me as I got this with the intention of playing as a party game, and because of the franchise, it’s one I could play with my family without them getting bored as the only athletes they know are high profile sports people who have since retired. It’s way better to play Wario in the 100m Dash than watching an unknown (to most kids, and some adults).

I think that Mario & Sonic at the Olympic Games Tokyo 2020 would have been an excellent opportunity for a few more additions to the roster that weren’t variations of Mario and Sonic. I know it’s in the title, but the game could have made use of a character list like Smash Bros. Ultimate. While I’m not suggesting as many, it would have been nice to have played other retro Nintendo characters or perhaps characters that are famous for being on Sega platforms Ryo Hazuki from Shenmue, or how about Viewtiful Joe? Just a minor observation, but sometimes the addition of one character can impact the game, even if a little superficial.

As a solo player, you’re likely to play through the story mode in one sitting or two. You needn’t be a die-hard fan of the events to keep playing, but if you don’t enjoy playing the games ‘as is’, you’ll quickly become bored with it as there’s not enough to cater for most solo players in the long term. However, if you want a decent local multiplayer with familiar characters, that has something for a younger audience and those fond of the retro era, then Mario & Sonic at the Olympic Games Tokyo 2020 makes for an excellent party game.

A token title in the lead up to Tokyo 2020 with familiar characters and a familiar style of play, but this is one perhaps best suited for those intending to play as a multiplayer game as not enough replay value for individuals once you’ve finished the story.