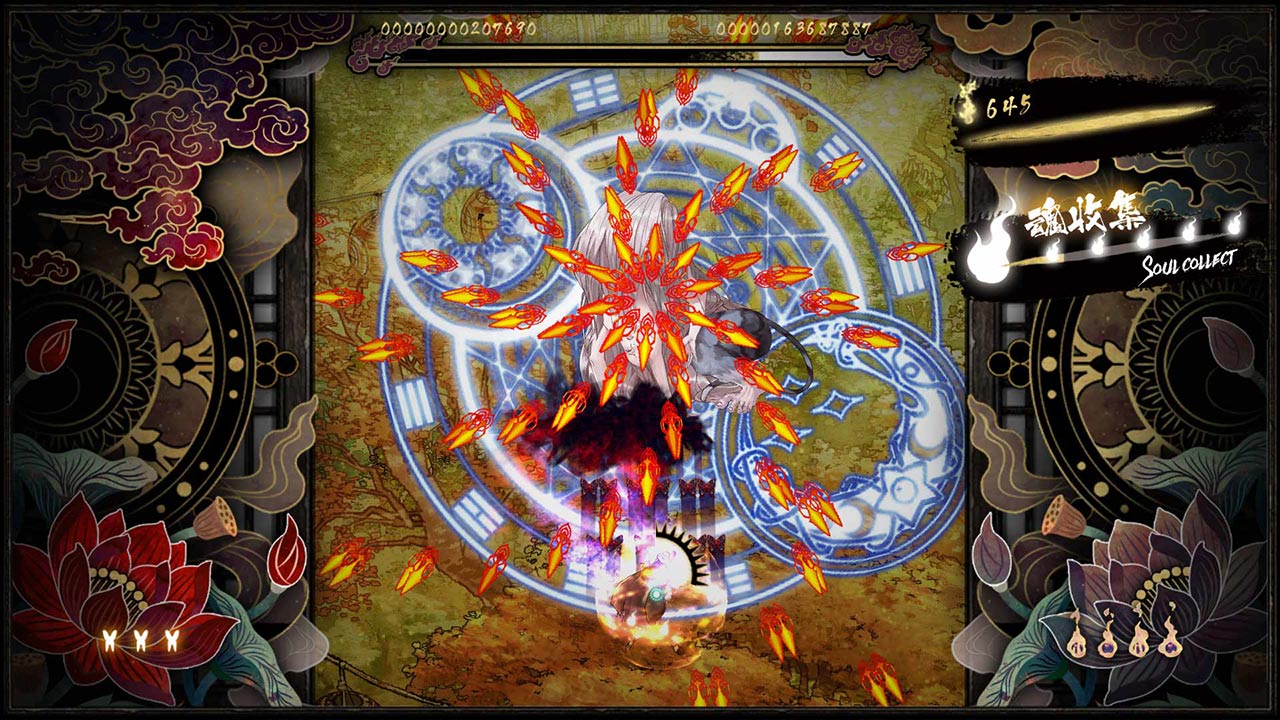 Any game that features a blanket of bullets and rockets always used to be called a shoot ’em up or shooter – whether that be a vertical or horizontal scrolling game. A term more common these days is bullet hell. If there were a title that could give a very good representation of this sub-genre, Shikhondo: Soul Eater would be out of the trenches and at the frontlines.

Some of the best arcade games that have been shoot ’em ups have been the likes of 1941, R-Type, Gradius and Ikaruga – all of which are either vertical or horizontal based games. Shikhondo: Soul Eater is a vertical type and resembles a similar model to the arcade titles before it. Often these games would have unusual screen ratios – a bit like Donkey Kong, so rather than have gamers stare into the abyss of black borders, they usually have some game art along the sides. In this case, Shikhondo: Soul Eater plays the part well, and while the images are bright and bold, they don’t distract from the action. You won’t stand a chance as the action here is fast and frantic. Bullet hell, as we’ve already defined.

This genre feels quite dated and doesn’t seem to have evolved into anything groundbreaking. Arguably, audiences tend to be fans of the genre, knowing what to expect and aren’t interested in anything that changes the game up so much. In some respects, this type of game is completely stripped down so that all the attention goes on survival and earning massive scores. 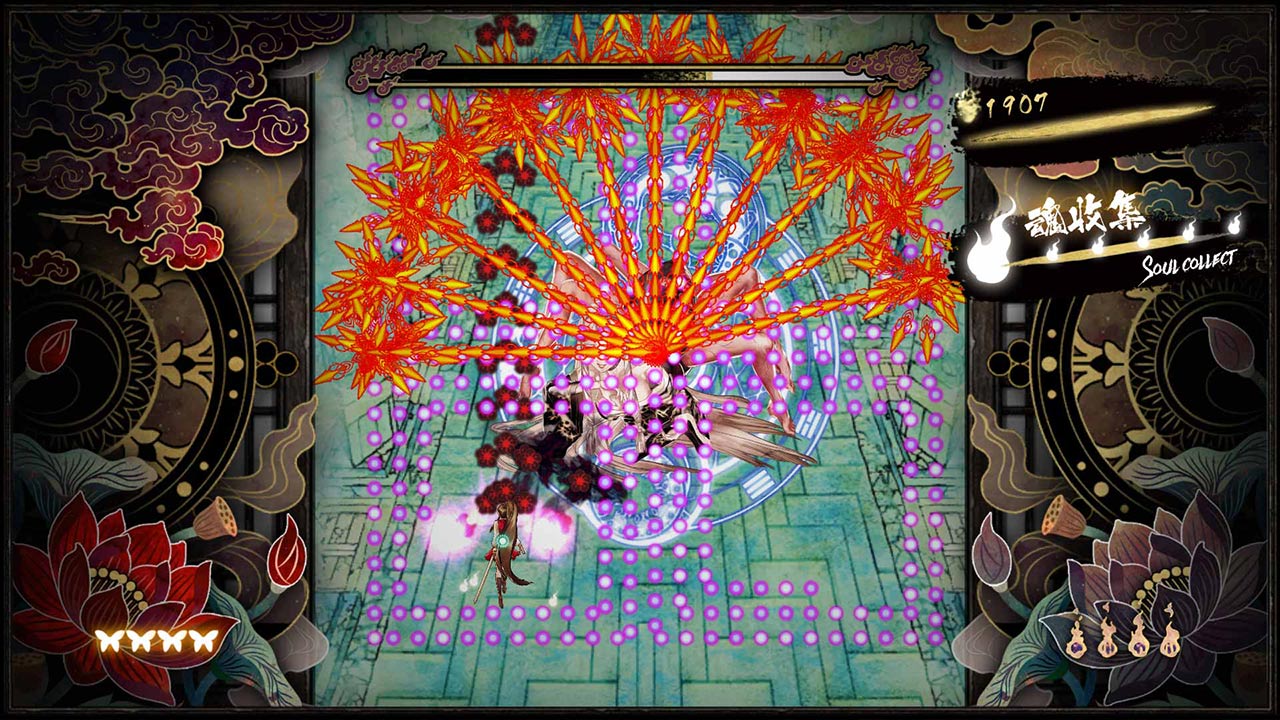 Following on from the stripped-down element, Shikhondo: Soul Eater doesn’t have any backstory, cutscenes or narrative driven plots. You take the role of either Grim Reaper or ‘The Girl’. The latter hardly sounds anything mysterious, but both pack a punch and instead of the typical spaceships or aircraft you’d control, you play these two females flying through the skies with unlimited firepower. There isn’t any need for deep sub-plots as they tend to be cliche and surplus to the actual gameplay, but it would have been nice to have a little story. Without any spoilers, my first playthrough was a co-op and having managed to get through the onslaught, the screen faded to black and other a brief roll of credits, a title card saying ‘Thanks for playing’. It was very anti-climatic, but again, the focus is on gameplay and hi-scores so if you want a bit of melodrama, you might have to look at another title.

The gameplay is more or less the same throughout Shikhondo: Soul Eater with a few caveats. Other than the co-op play, which I thought would be a lot of fun (it wasn’t so much), there’s the solo campaign and a Customize section. Thinking this would be an option where I could give my character even better hair or change their costume, it was the same game, but you could tailor what available power-ups you have, how you’re awarded them and how your health is replenished. Each new mode is a tweak of the base model. There’s also the option to play against the bosses as a separate experience.

Shikhondo: Soul Eater has an interesting approach to the overall presentation. Sure, it has the bevels either side of its vertical play area, bullets and other projectiles are the equivalents of opening a family-size bag of Skittles in space. There are colours everywhere on the screen at one time and practically impossible to dodge. However, it’s the choice of two people flying through the skies and the bosses that are quite unique. These characters are based on yokai – Japanese monster folklore and styled in a classic art style. It was refreshing compared to the many motherships we usually have to take head-on. Each boss has two stages – halfway through, they morph into a more grotesque version and unleash a further assault that makes the fireworks at the opening of the Olympics seem quite tame.

All the while these character models look really cool at times, there doesn’t really seem to be much feedback from the game and is almost like you’re the spectator, even when playing. The music was a highlight – featuring some industrial sounds blended with a bit of metal, then morphing into a dub-step track when taking on the bosses. Unfortunately, the sound effects were entirely redundant as there didn’t appear to be a separate audio track when you fired. The best way I can describe it is by playing any game with the sound off and playing a third-party soundtrack in its place. Holding down the B button provides rapid-fire, switching to A at the same time focuses your fire in a straight line. But you can’t hear it. There are other sounds in-game, but they seem very abstract in comparison. 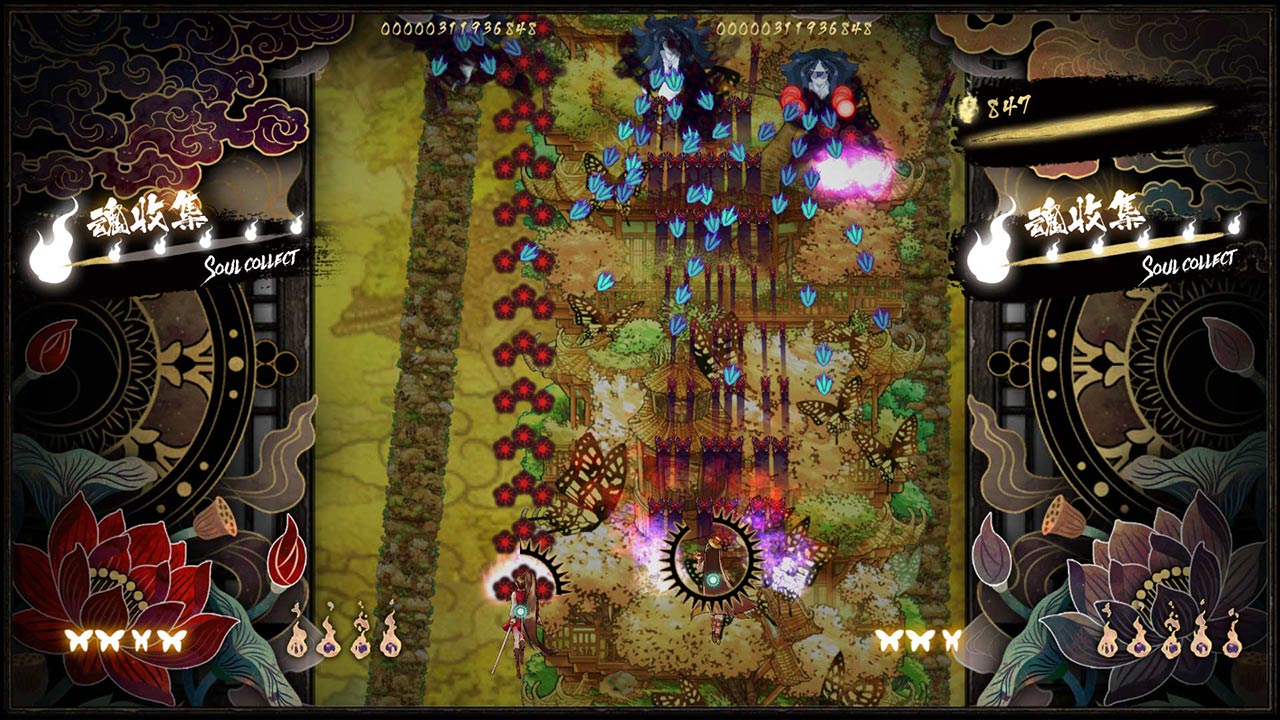 As a veteran of these type of games (that doesn’t qualify me as good, just that I’ve played and own a lot of the classics), I know what to expect. This genre can be very repetitive, but it’s also enjoyable. I didn’t really have that same experience with Shikhondo: Soul Eater and playing through it felt a bit of a chore. To ensure I could experience as much as possible with the game, other than solo-play, I roped my daughter into some co-op play. Switching it to easy mode (extreme modes are precisely that) to give her an incentive to stick it out, we ploughed through the apparent five stages (it felt like more) and I would frequently look over to see if she was into it. Not once, but abusing my position, the reward of being able to play Pokemon Sword shortly after meant that we stuck it out and finished it together. We were unanimous that the visuals were fantastic, but that it didn’t capture our imagination and enthusiasm.

Again, the graphics are great – the bosses being a particular highlight. The much smaller enemies are also drawn upon Asian mythology, and there are some great characters here, but the models are a little limited. Going into stage after stage, facing the same enemies felt a little lacklustre. There aren’t any interactive backgrounds such as those in Star Soldier, but that was a tease of some excellent cloud effects. If there were a few more battles in this environment, it would have piqued my interest more, but instead, it all felt a little samey – even if there were so many difficulty options to keep even the hardcore gamers occupied. The issue was never with the challenge – it’s most definitely there, it’s just that the experience felt a bit flat.

No doubt there will be communities who will lap this up and argue it deserves a much better score. Still, I can only base this on my experience and preferences, taking into account casual gamers as well as those with witchcraft-like abilities who can most likely quadruple my scores in half the time. It’s not a bad game at all. Still, the sound and variety let it down a little. Perhaps if it had a little more options like having a shop to upgrade weapons or a few more customisables, that would have been great, but then again, I’m now comparing it to the likes of Xenon II – a different game, but brilliant.

Shikhondo: Soul Eater is a fast-paced bullet hell with some gorgeous visuals, unique bosses and a fantastic soundtrack throughout. The lack of connection with the game was a bit of a letdown on my part. If you’re a fan of the genre, then you’re unlikely to be disappointed with the challenge.