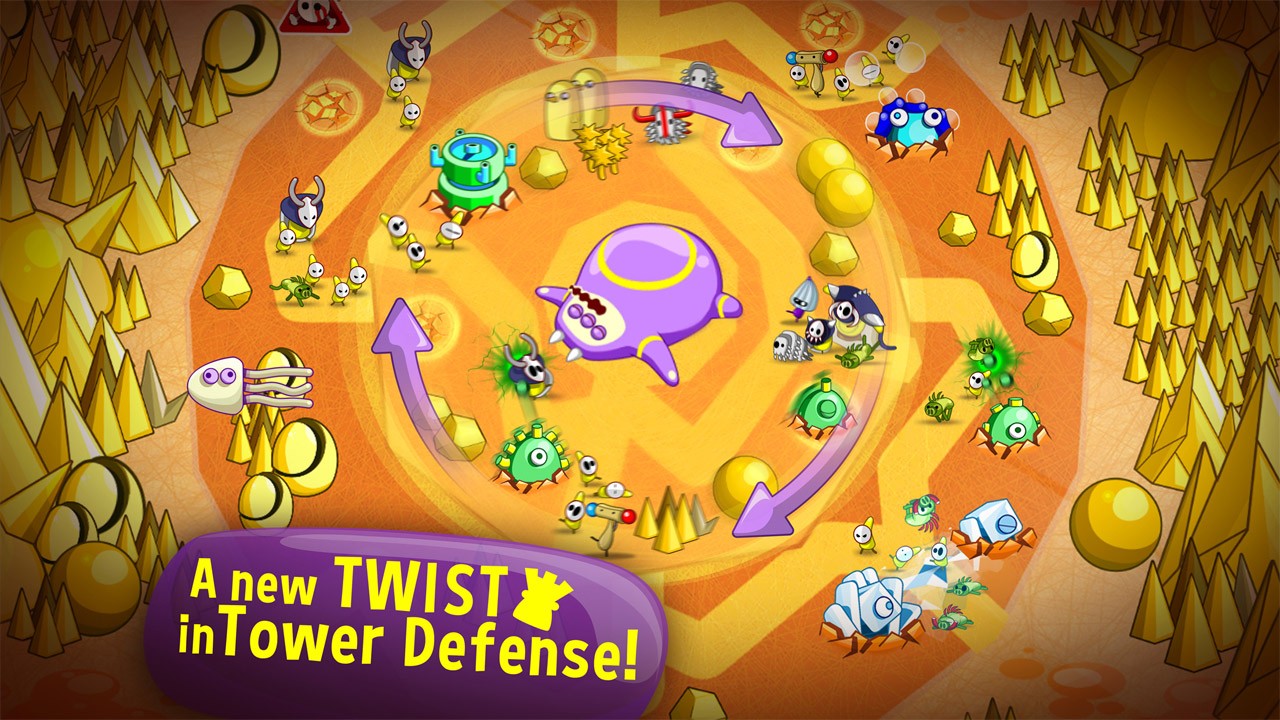 I’m a big fan of tower defence games as much as the next person. If they’re a tower defence game fan in the first place, that is. A kind of evolution of the classic RTS games from the PC era that makes it much more accessible to mobile gaming, they are deceptively simple, yet devilishly hard at times. Sleep Attack fits into this category pretty well, so let’s see how it handles on the Nintendo Switch.

The intro seems mildly irrelevant as it shows what we expect to be the protagonist of the title, only it’s completely dormant throughout the game. The cutscene (no spoilers), shows a monster having a marathon gaming session, only to drift off to sleep. This whisks them off to strange lands where they are the focal point; asleep directly in the middle of each stage. Without being a connoisseur of Pokémon, you might note the uncanny resemblance of a three-eyed Snorlax. Regardless, it lays in the centre of the screen and your job is to ensure the waves of enemies don’t hurt him.

Like any typical tower defence game, you have to strategically place a tower then upgrade it accordingly. Wave after wave of enemies will pour onto the screen from multiple locations, each with the motivation of taking out your lovable narcoleptic Pokémon clone. The most significant difference to the majority of these type of games is the fact that you can rotate the playing field. The outer grounds remain the same, but the centre of the screen is like a disc that you can rotate at any time with the left analogue stick by circling clockwise or anti-clockwise. 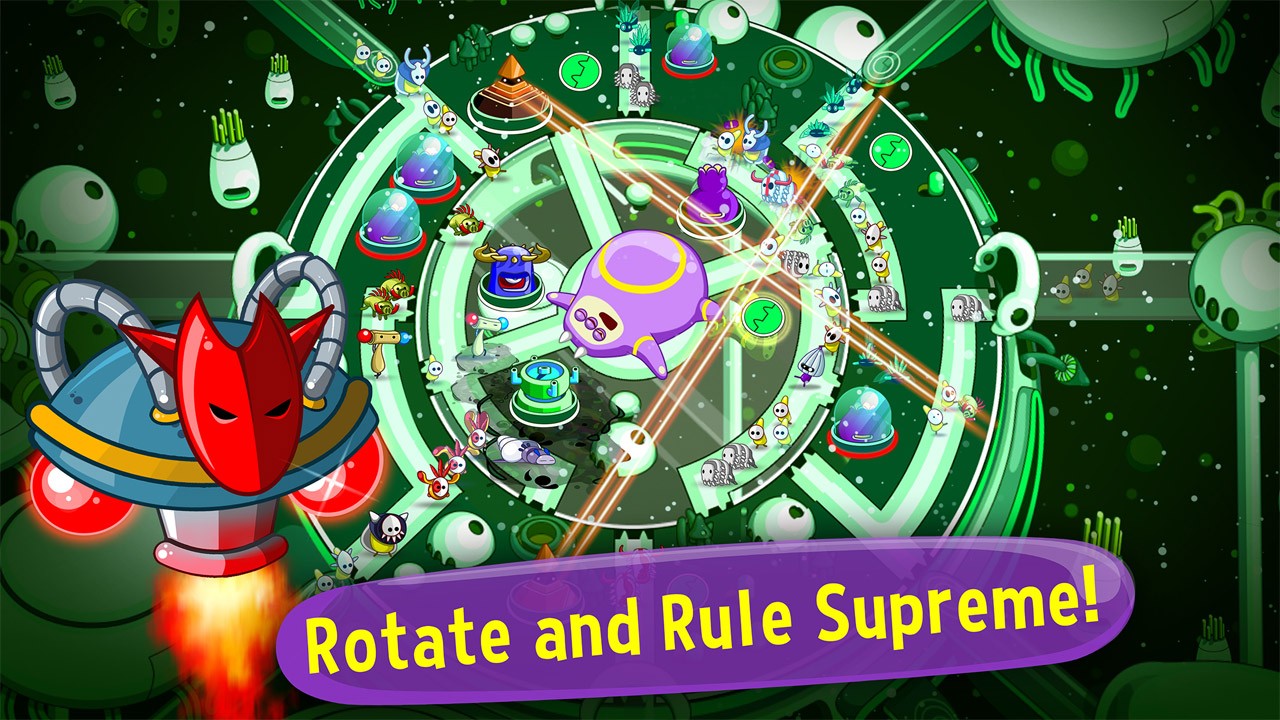 At first, I thought this was a gimmick – an interesting one, but not needed. However, as you progress into the game with harder enemies and less coin to build or upgrade, swivelling the centrepiece around will ensure your survival. It works for several reasons. First of all, it means that you can create longer paths for the waves to walk – allowing more time for your towers to defend. Secondly, you can break up the waves by turning the map around, splitting them up so that, depending on the towers you have in place, you can pinpoint them and break them down. There are various times when the enemies aren’t particularly tough, but there are so many of them that you need to split them up.

Each time an enemy breaks through your defence, they’ll take off a hit point from your character. There are 20 points to begin with, and each enemy takes off a point, though later enemies take off two, sometimes more. Generally, they will die once they take off the points, but there are some enemies like the bosses that will repeatedly attack without losing any health. There isn’t any way to replenish your health, so once it’s gone it’s game over.

Sleep Attack features a rating system where you are rewarded stars for your performance – a total of three per level. The less damage you take, the greater the result. It’s motivation enough to get perfect scores and offers a great deal of replay value as while the game is achievable; it’s mad how many times you’ll lose a hit point just because you overlooked an area. If you’re a perfectionist like me, you can quit and restart or even speed up the level if you’re confident of a win. For those who like to think it through for a bit longer, you can also pause the game to rethink your battle plan.

The presentation is cute and very colourful. My first impressions weren’t good as the characters are very small on-screen, so while this can be played in portable mode, it’s better docked. There is, of course, the benefit of using the touchscreen when in handheld, however, and sometimes this gives you a slight edge for later levels as enemies come in thick and fast – you need to retaliate pretty darn swift. The controls aren’t cursor led though, as you can use the L button to highlight a spot to build or to select an existing tower by using the left stick to scroll through locations. From here you can build, upgrade or sell the tower. 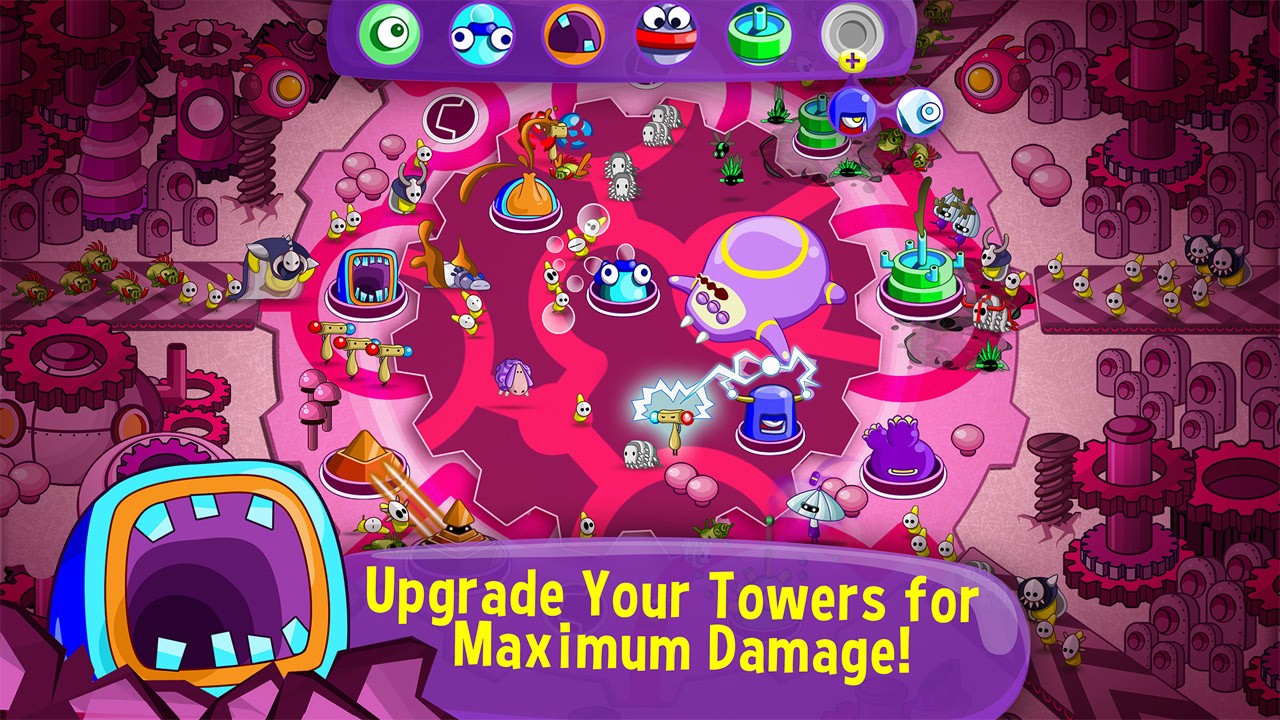 As there are so many tower games out there, these titles need to stand out a little more than their peers to stand a chance. The rotating arena is a selling point, but the other vital areas in a tower defence game would be the tower options and the units. There are the expected towers such as cannon-type attacks that are slow in frequency, but do a lot of damage. The generic turrets that resemble Plants Vs Zombies’ pea shooters or Pixel Junk Monsters’ arrow turrets, as well as towers that slow down the enemies – in Sleep Attack they use glue rather than the conventional ice. It does a little bit of damage too!

Enemies here aren’t that special. There’s a good variety that increases in numbers and improves defensively, but it’s hard to see the little details in each character due to the scale of the maps. That said, the larger enemies are likeable additions – even if their presence dictates whether you’ll earn all three stars or not. Overall though, the range of turrets and enemies allow Sleep Attack to be a title worth looking into if you like this sort of game. The rotating maps certainly aren’t a gimmick as initially thought, and offer up a unique defensive style of play that doesn’t rely on overpowering a handful of turrets.

Sleep Attack is made up of six worlds, each with their own stages. Other than a few changes in scenery, they’re all relatively the same and doesn’t offer much in terms of environmental changes, but enough map choices where not one game feels the same. Even if you don’t max out the three available stars in each stage, Sleep Attack will keep you coming back for more. Once you unlock new towers, you can use them in earlier levels and either relive or renew your interest in that particular round.

A tower defence game that will only put you to sleep if you don’t like the genre – for those of you who are fans, you’ll be pleasantly surprised at the twist mechanic and the longevity of this enjoyable game.

Plenty of towers to unlock, each with their perks.
Interesting rotating mechanic adds something new.
Colourful and stands out from the crowd.

A little hard to see some of the units at times.
Sound effects are a little annoying, but a minor niggle.
If you lack patience, this won’t be for you!