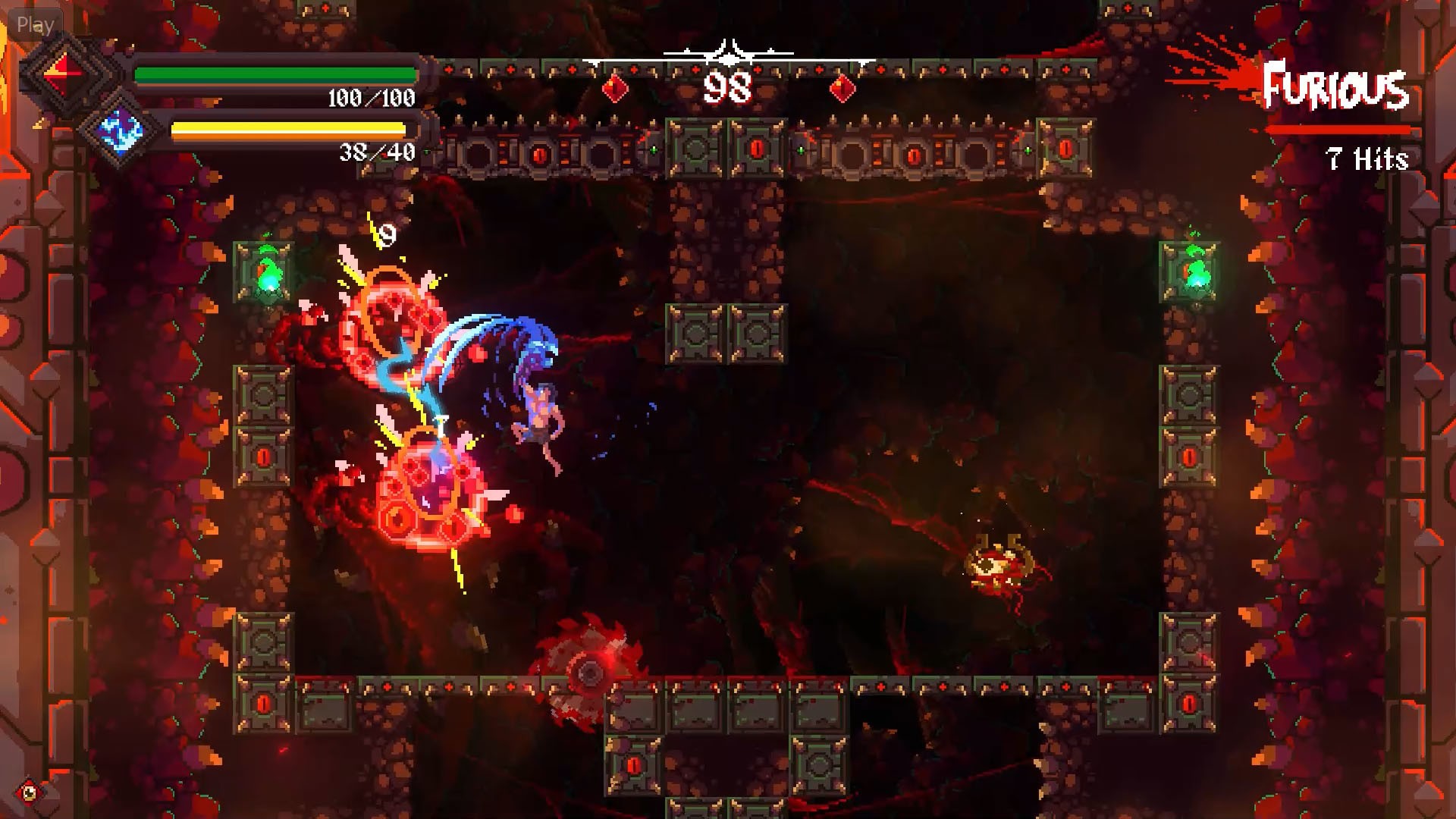 Rising Hell is yet another action-oriented roguelite platformer, or is it? Well, for starters, one of the things that immediately sets it apart from the myriad of other roguelites out there, is the fact that the entire game settles on one key principle, verticality, which I’ll talk more about later.

Rising Hell doesn’t try to tell any meaningful story, and to be honest with you, it doesn’t need to. The only thing that is obvious to everyone and anyone is that your goal is to escape from Hell, by climbing your way out of the damnation. In that sense, Rising Hell is a vertical platformer, if such a designation even exists or makes sense.

If you’ve watched the trailer for Rising Hell, chances are that you already have a pretty good idea about what this game is all about. In any case, I shall explain it to you. After finding yourself trapped in the depths of Hell, your only chance of escaping that damnable place is to fight your way to the top, the top of what seems to be a conveniently placed tower right there for you to climb. In order to do so, you must unleash your wrath upon throngs of demons and all sorts of devilish creatures. 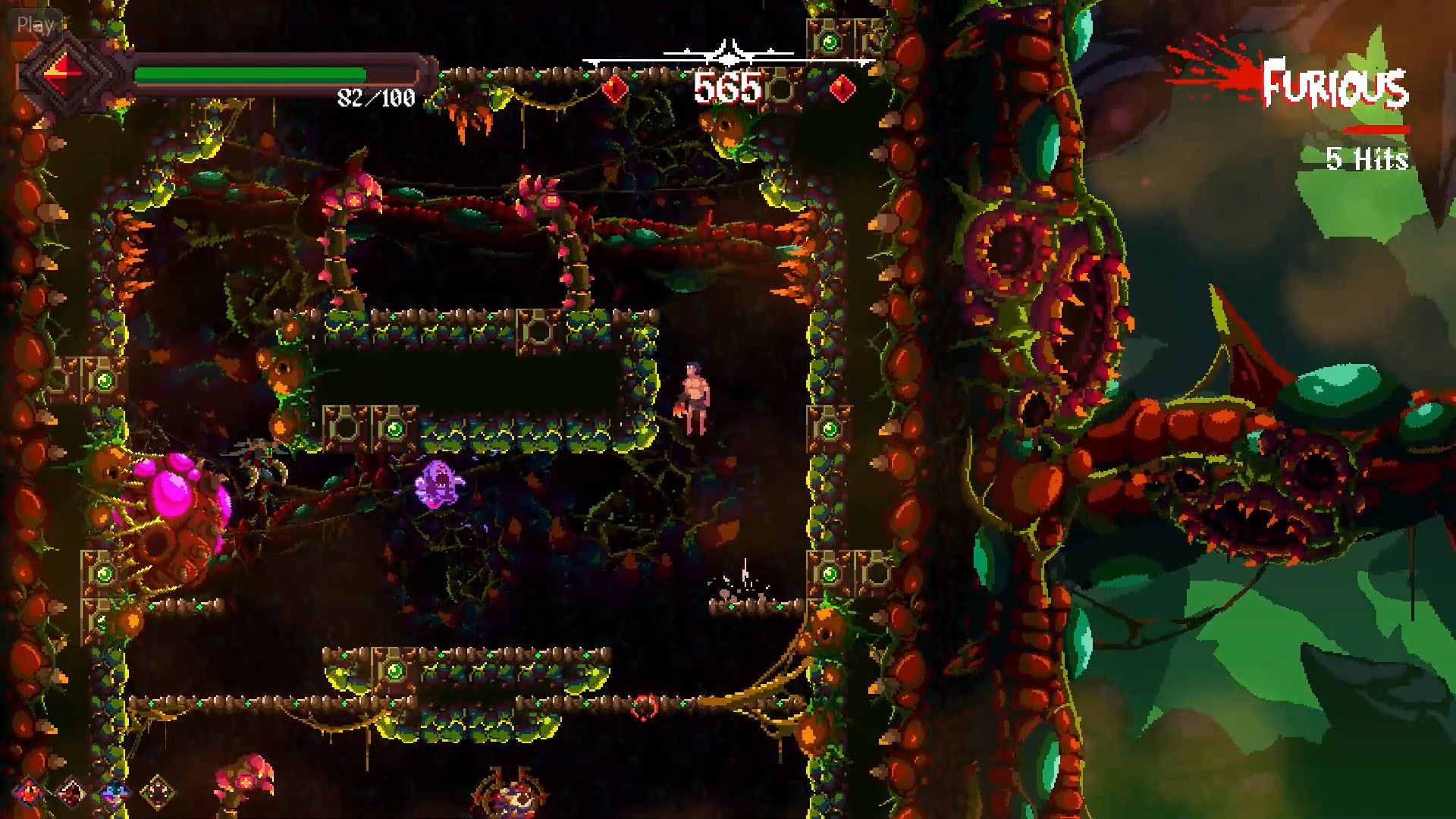 While combat in Rising Hell is extremely simple, as in lacking complexity, the way it feels is nothing short of amazing. The thing I noticed immediately when I first played the game, besides the amazing(!) heavy metal riffs and the gorgeous pixel art, was that the game perfectly conveys the weight and strength of each attack, both visually and audibly, as the crunching sounds of you breaking enemies to pieces and the amount of gore and the fluidity of your characters’ movements are so satisfying to watch.

While you won’t find yourself overwhelmed by enemy numbers, you do have to watch out for the few that are around you. There are also numerous traps that lay waiting to make your life shorter. To avoid and fight all this, you can double-jump, dash, and wall jump your way around, which prove to be necessary if you want to steer clear of all threats. Also worth pointing out is that there is no way for you to drop down from platforms as you climb, your only way is upwards. On that note, the extremely powerful upwards slash attack comes in quite handy, as not only it deals a huge amount of damage, but it also allows you keep on moving up at a faster pace.

As you climb, you might find portals that lead to optional “rooms” that usually have souls, enemies, or a hidden vendor selling some perks. These souls also drop from fallen enemies, and they’re used to purchase perks like increased invincibility time after being hit, or increased damage percentage, from shops that you may find during your climb. Then there are also power powerful time-limited artefacts and weapon relics that deliver quite the punch but have a finite amount of uses. These two items shake things up quite a bit during your playthroughs and most often than not can be the difference between life and death, especially during boss battles, as you can often find yourself struggling with not only dealing with the boss itself but also enemies that might join the party, as well as bullet-hellish sequences where there are a few projectiles flying around.

The game currently offers both a Quest Mode (call it Campaign if you prefer), and three different series of challenges that are sure to push your skills as far as they go. These challenges modes are, the Godslayer, the Bloodlust, and the Hellrisen. In short, Hellrisen clears the levels of all platforms and ground, forcing you to avoid enemies and sawblades by simply jumping around and using your upwards slash attack in order to propel yourself higher towards the exit. On the other hand, Bloodlust pits you against several waves of demons before allowing you to climb further, and then there’s Godslayer. This one is essentially a boss rush mode where bosses get progressively harder as you beat them. It can also serve to practice against bosses before facing them in the campaign. 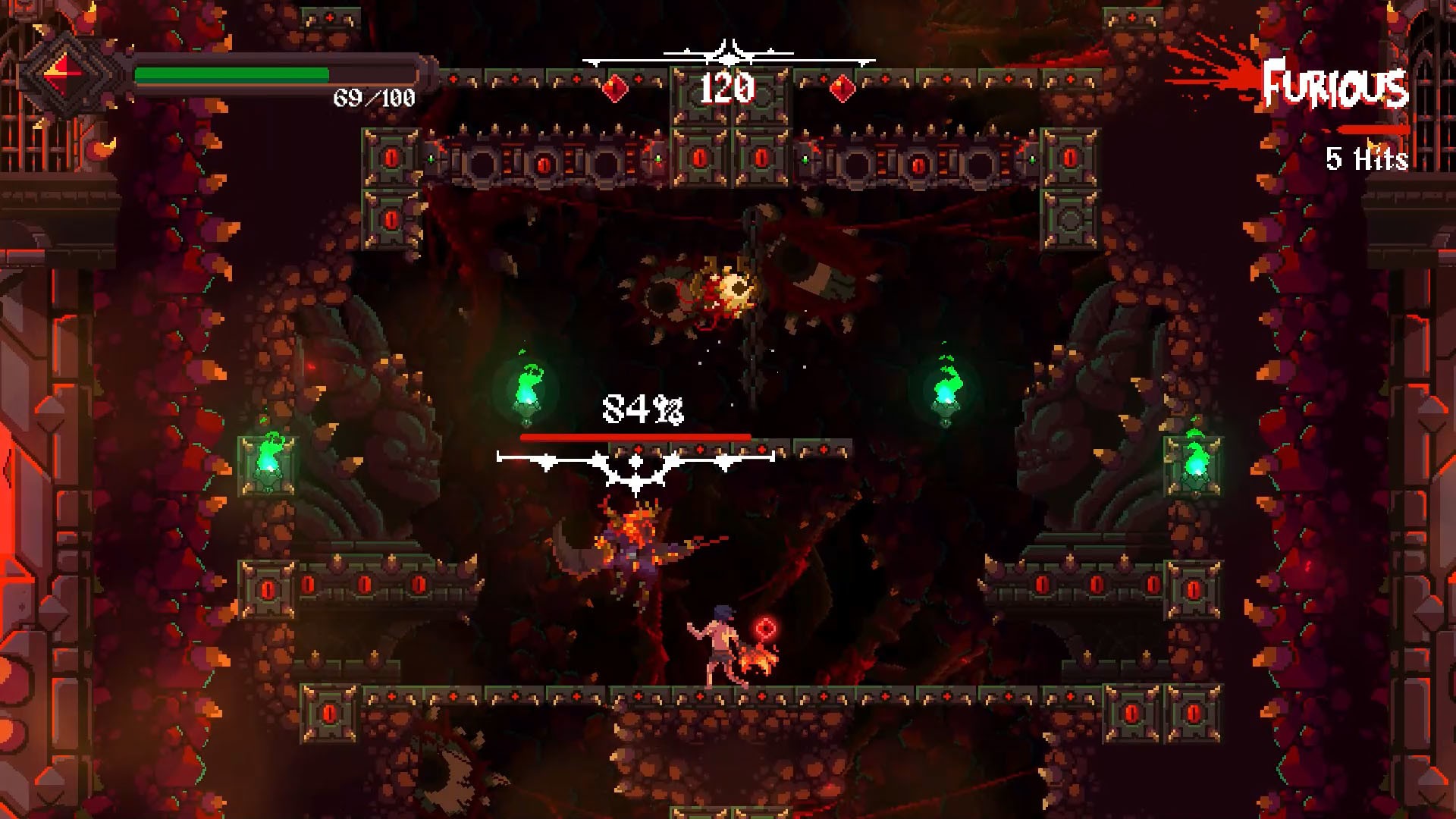 There are also different characters that you can choose, even though at the moment there are only two available. Each has its own unique talent, and they provide different gameplay experiences. For instance, the starting character relies on melee attacks to cut his way through the demon onslaught, and the second character, a friendly fiend, makes use of ranged attacks to lay waste to its fellow demons. As you play the game you’ll also gain experience and level up your profile, which will unlock new items that you can purchase with blight, a rare currency dropped by enemies that can be used to purchase new starting weapons and the second character, and, presumably, more in the future.

While levels are randomly generated and despite the game being divided into different areas that you can choose from, as you climb to the top of each one, for the most part, the enemy types, traps, and level layouts seem to vary very little no matter what zone you’re in. From what I can tell, there’s only an area that stands out from the rest in the First World, and that’s the Slaughtering Spire, as it’s impossible to forget the first time you go through there and find yourself stuck in what feels like a neverending climb surrounded by sawblades. However, there are currently three Worlds, and the transition between these is much more evident than moving from one area to another.

Rising Hell looks, sounds, and plays fantastically, but despite having only played for a few hours, I have to say that it’s starting to feel a bit old. Maybe this is the result of writing this after playing the game for a couple hours straight, or maybe the genre is just starting to wear down on me. Nevertheless, what the game currently offers, especially given its surprisingly low price, is more than worth it if you’re a fan of platformers or roguelites in general, and this will hopefully only get better as the game receives more characters, worlds, levels, enemies, weapons, bosses, and so on. Will you be up to the challenge and fight your way out of Hell?