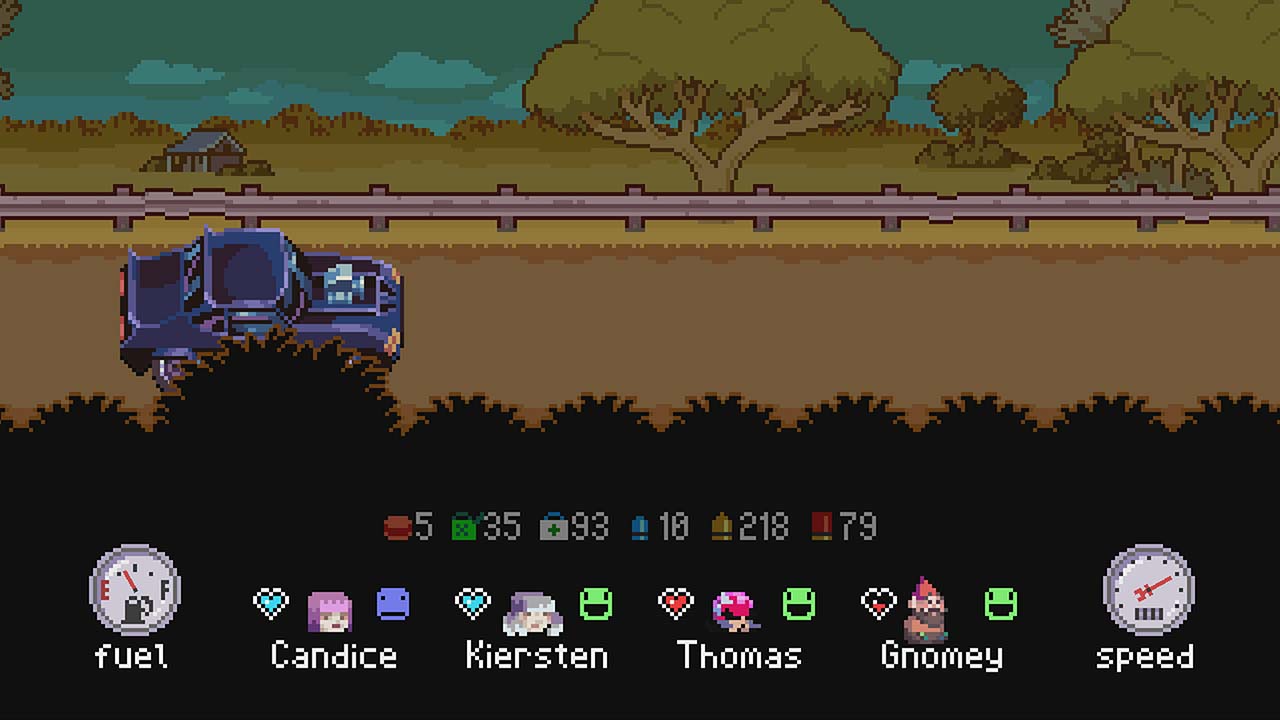 The Oregon Trail is a game that’s so relevant and well known that they decided to nickname a generation after it. That’s completely insane, but also completely understandable. It’s one of the few games out there that was played, at least once, by nearly everyone in a spanse of people in certain geographical locations. I can’t attest to how much it was enjoyed in Europe or even Canada, but the game explored and imprinted some great life lessons. Namely, about how to survive, the choices you have to make, the sacrifices that come, and, unfortunately, how the best laid plans get totally destroyed no matter how much you prepare. The agony of a fully stocked, healthy wagon with four cheerful people getting caught in a flash flood and ending the game was real, and incredibly relevant to the future that generation would explore. Many have tried to recapture that feeling. A few have done well, but, as we’ll discover, the secret is not to copy perfectly, but to adopt and adapt. That, I feel, is why I had such a great time playing Death Road to Canada.

Death Road to Canada, however grotesquely titled, is the story of an apocalyptic America that is going through a bit of a zombie outbreak. Far from trying to be a hero and save humanity, you’re trying to flee the horde and save your own selfish ass. Hearing that maybe things are better in Canada, you’ve got about two weeks ahead of you for the purpose of fleeing and getting the hell out. I say about two weeks because, let’s be honest, this isn’t going to be a smooth ride. Things will come up. You’ll find other survivors. You’ll scavenge for supplies. Your car will more than likely break down. A slew of other insane elements are definitely going to happen, and, throughout it all, there’s always zombies. Zombies by the fistful, zombies by the truckful, docile or homicidal, and always willing to make room for more in their herd. 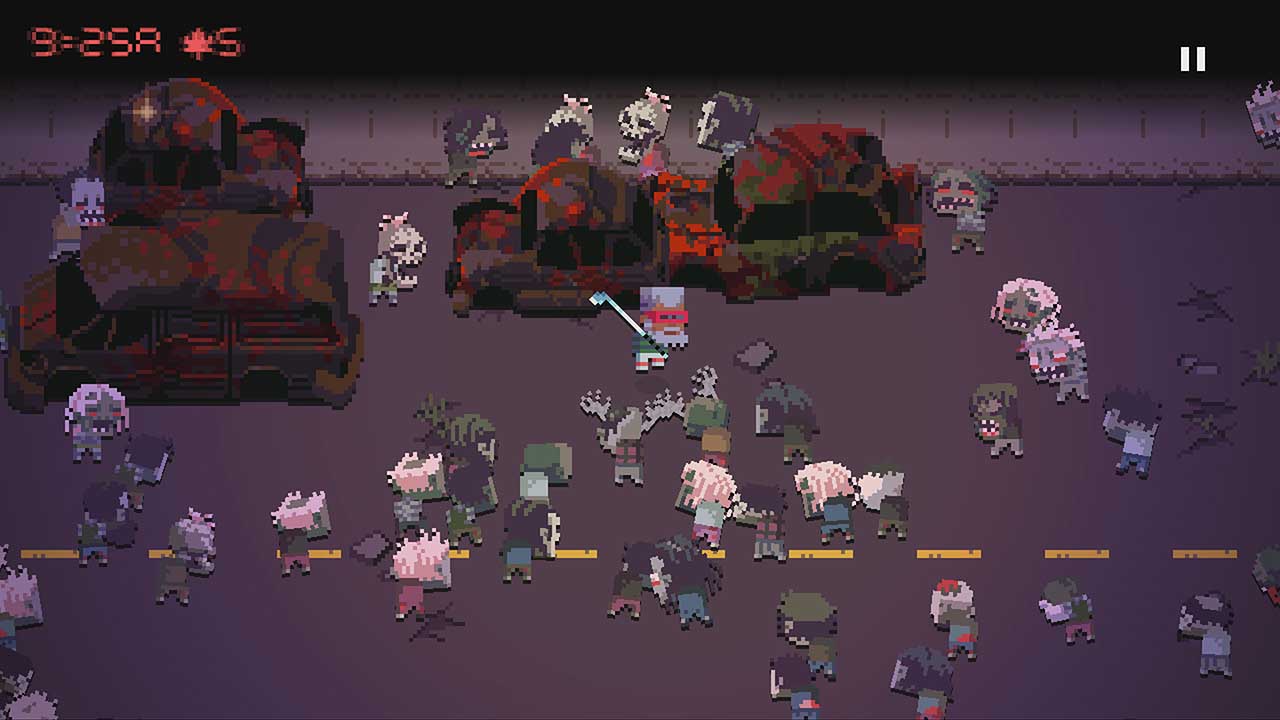 Completely deconstructing this game and covering all the facets of it is a disservice to the player, the reader and the development team of RocketCat Games. There is so much here that it kind of baffles me that the install size isn’t significantly bigger. The pixel graphics may be at work for this particular black magic, but I don’t think that’s quite it; I think great optimization is the key. Even though Death Road to Canada is far from a Switch exclusive, you can tell that a great deal of care went into this game to make sure that it ran as smooth, if not better, than other mobile versions while still carrying the perks and benefits of a console installment. I never ran into stuttering, loading or general lagginess no matter how many zombies appeared on the screen. The most I had in terms of “delay” is when I borked a grenade and blew up three of my four party members. I think the game had to scramble to give my NPC buddy who I just found a personality and tell me “he’s in charge now.” Seriously, game runs like a dream.

Death Road to Canada does fun and hilarity in a way that is somehow both G-rated and still consistently adult in execution. No one swears, though the word Dink is thrown around quite a bit (to great comic effect). There are frigging giblets everywhere when you slaughter zombies, and you don’t feel your cleanest when you grab a loose femur bone and use that to beat the undead back to death. Getting a dog in your party: fun! That same dog deciding to pick up a knight’s sword in its mouth: bizarre! Turning into a half man, half dog beast due to a weird lab machine: sure, why not! I killed about fifty zombies in a single room using my fists and whatever furniture I could grab. I accidentally killed myself trying to remove a sore tooth. I punched a car back into shape. This list goes on and on, and they’re all memorable moments and interactions.

As you continue onward, there is a lot of incentive to try and get to Canada besides not dying. The bonus points you get for surviving bad scenarios (and finding them randomly hidden in some places) gives you the opportunity to unlock new traits and, as such, new play styles. I started out really focusing on beefing up melee fighters, but I soon changed to create ones that had better passive, non-zombie related skills. You don’t realize how much you want someone who can keep up morale until your car full of jerks are at each other’s throats and you can’t trust a single one of them to do a solo mission. The banter as you drive becomes insane and inane, and all it takes is one person who knows how to make merry for the game to continue onwards and not end in a murder/murder/suicide. 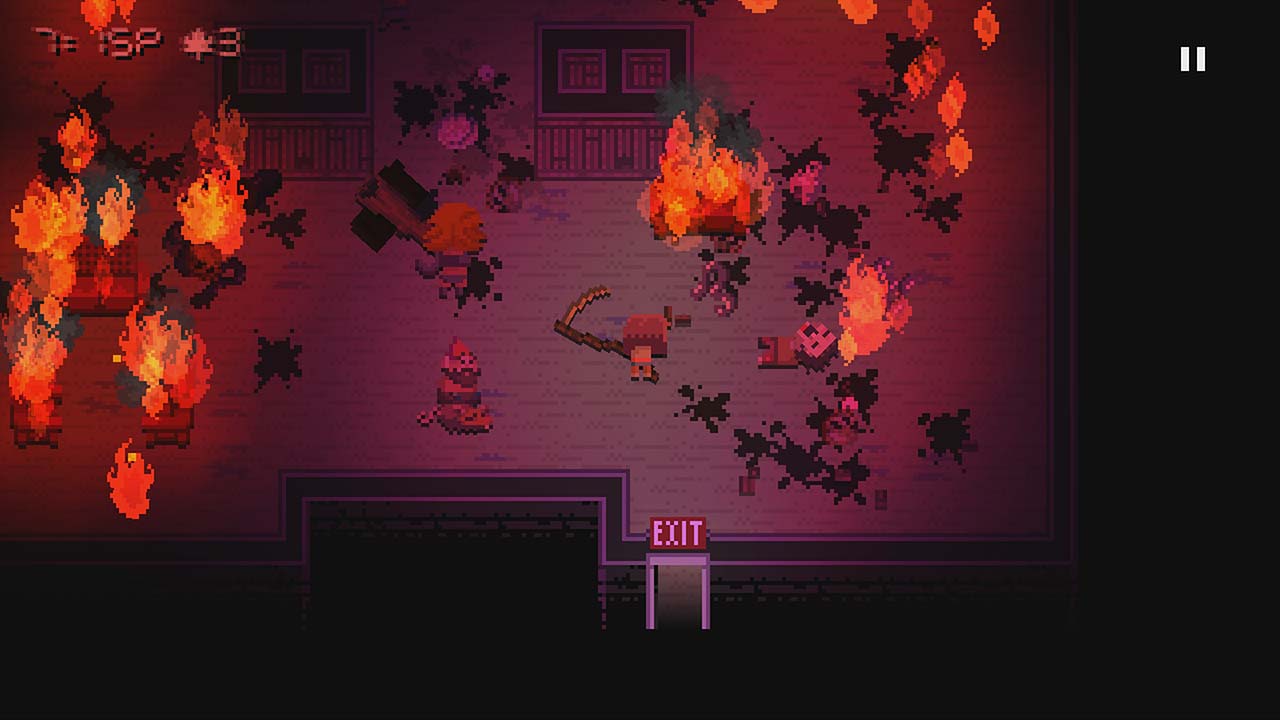 There’s multiplayer. Enjoy it. Use it. Having more than one person who actually knows what they’re doing on the way to Canada is the difference between success and dying screaming in anger. You can set the way your NPC teammates react and engage with the zombies, but you can’t really change them on the fly. Having a friend or loved one on the other end means coordinating loots and attacks in significantly more successful fashions. On the other hand, that also means not being able to just throw them under the bus when the zombies are too heavy. I mean, you still could, but you’d be betraying someone you care about, and that only works well for certain people. Additionally, being able to give a powerful extra weapon to someone you trust to use it means great strategies and lower risk of it disappearing into the horde.

What makes Death Road to Canada the better mousetrap in terms of Oregon Trail clones is that the randomized elements only make up half the game. I often think about the almost shot-for-shot variation, Organ Trail, and why I didn’t engage with that one as much. The fact is, if I wanted to play Oregon Trail, I would. Organ Trail is charming, and fun, but there’s too much that felt same-same. Death Road to Canada mixes it up by having utterly surreal elements (like telling people to COOL IT to resolve a situation) intermingled with the reality of “Who’s gonna stay awake all night to check for zombies.” And, when it comes to scavenging, it’s not just a roll of the dice. Getting into the homes, making the call to dig through each and every room versus just smashing into the first domicile and grabbing what you can. The action and fight against the zombies is real, and it gets denser and denser with each passing day. When you’re less than 48 hours away from Canada, the struggle is REAL.

I beat Death Road to Canada, and almost immediately reloaded into a new game with my custom character, Don Tacos (a proper lady) leading the charge. She died seconds in, and, by chance, I ran into her again a bit further down the road. Make a bunch of custom characters, because why the hell not. It’s fun, and you can control a bit of the riffraff you know you’ll encounter if you make them yourself. The only ending to Death Road to Canada is when you decide it’s not worth hitting the road again, and, in my case, that’s not gonna be for a long time. Thanks to good load speeds and some great randomized elements, I’ll be setting off in search of Northern Sanctuary again and again, and, as the ancestors used to say, “Here’s to not becoming a horse.”