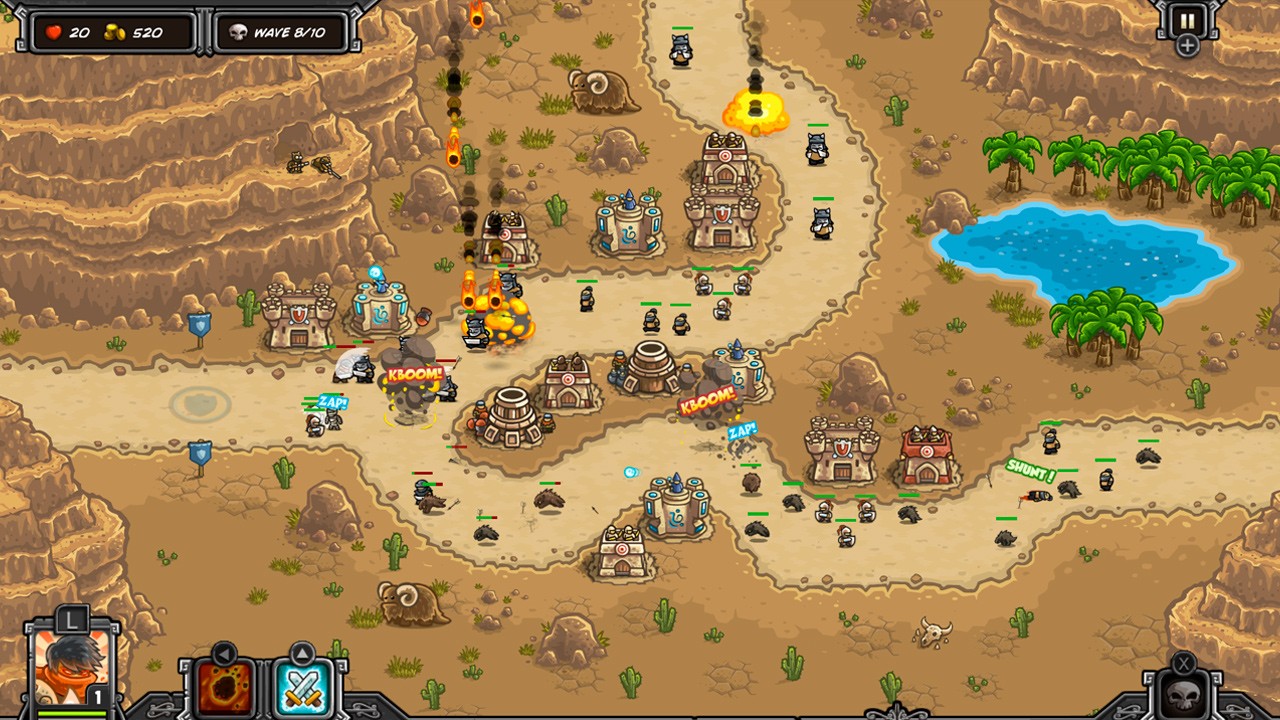 Kingdom Rush Frontiers is the second instalment in the highly acclaimed Kingdom Rush series, which actually came out in 2016 for PC, but like always, I’m late to the party. Like I’ve mentioned in my recent review of Kingdom Rush Origins (which is actually the most recent Kingdom Rush game but it is also a prequel), it doesn’t matter where you play games, because if you’re into Tower Defense games, the chances of you knowing this series are astronomical.

Thanks to the fact that I recently got my hands on Kingdom Rush Origins, I finally went back and played these games, which I’ve meant to do for so long. It was during my time with Kingdom Rush Frontiers that I came to a realization, even though now it feels like a pretty obvious one. There’s only so much you can do to shake up the core gameplay of a Tower Defense game in order to keep things fresh. Some games play it safe and end up falling into oblivion, as there’s nothing to distinguish them in an overcrowded genre, especially in the mobile space. In the meantime, other games add extra gameplay elements and layers to enrich the experience, and these manage to stand out on their own as some kind of beacon that symbolizes that there are still things that can be done, there’s always room for innovation, improvement and fine-tuning. And then there’s Kingdom Rush. 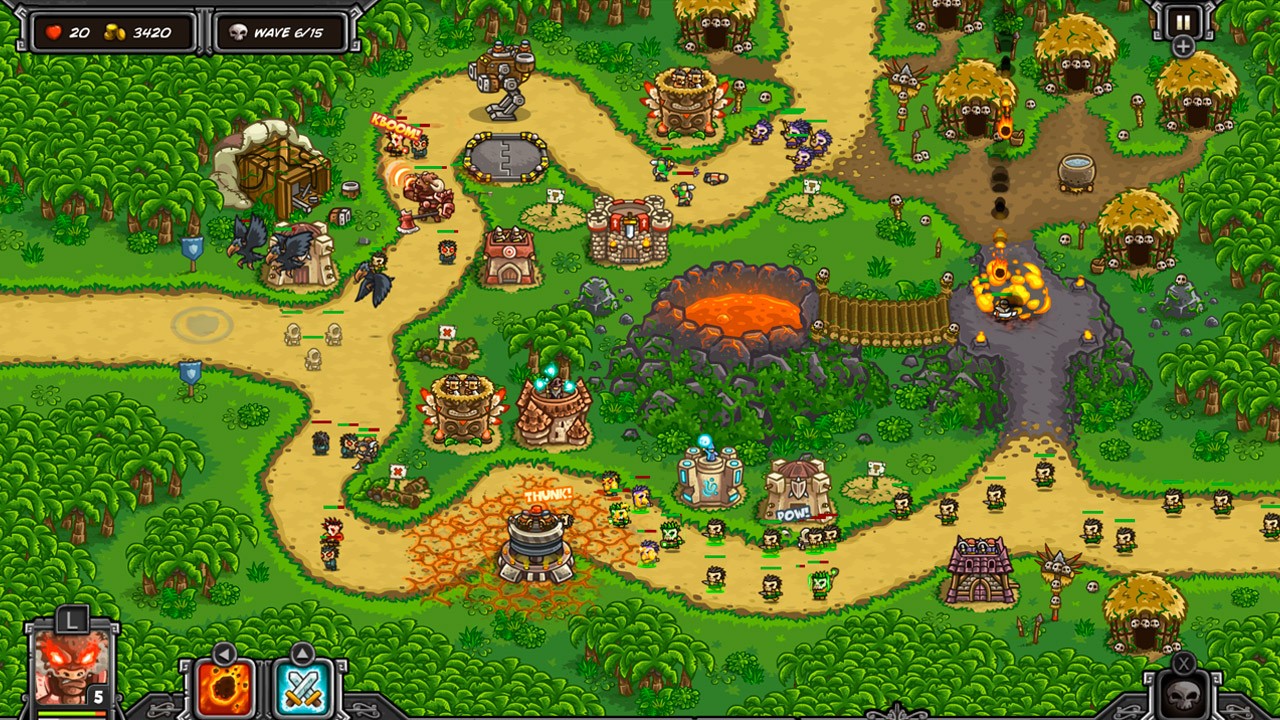 Whenever I end up talking with people that are fans of this genre, or whenever the conversation steers towards it, there’s always one thing that everyone seems to agree on, and that is that Kingdom Rush might just be the peak of the genre, the crown jewel, the tippy top. What’s so funny about this, is that the Kingdom Rush series might look like some of the most simplistic and uninteresting games for those people who have never played it. This is where the series magic lies, it gradually reveals itself more and more the deeper you get into it. Kingdom Rush boils everything back to the very basics of the genre, and then focuses everything on a wide variety of tower upgradability and different paths, as well as the hero units that are quintessential to the series. The apparent simple nature of Kingdom Rush gameplay is compensated by the use of hero units and active powers, as these two elements bring some active gameplay to the mix, wherein other Tower Defense games you’d just sit back and wait out the enemy waves as your towers did all the work for you.

Like the previous games, Kingdom Rush Frontiers puts you on some grand adventure to save your kingdom from evil, and while this is the sequel to the first game, I’d say that you can perfectly skip the first game if you so desire, as the story is the reason why you should be playing these games. That isn’t to say that you shouldn’t play the first game, as it’s also a great game, all I meant is that, to my eyes, your experience won’t be hindered if you don’t play them in order.

As with any Tower Defense game out there, each mission has you defending a predetermined path from enemies, by placing towers in specific building sites in order to stop them. The player’s objective is to keep enemies from reaching the end of that path, by resorting to four types of buildings, archer towers, barracks, magic towers, and cannon towers. Each of these serves a specific purpose in the grand scheme of things, but as you quickly learn, upgrading these can vastly change the way they operate, and I do mean drastic changes, not just some mere stats upgrades to damage, range, or attack speed like in a lot of other Tower Defense games. 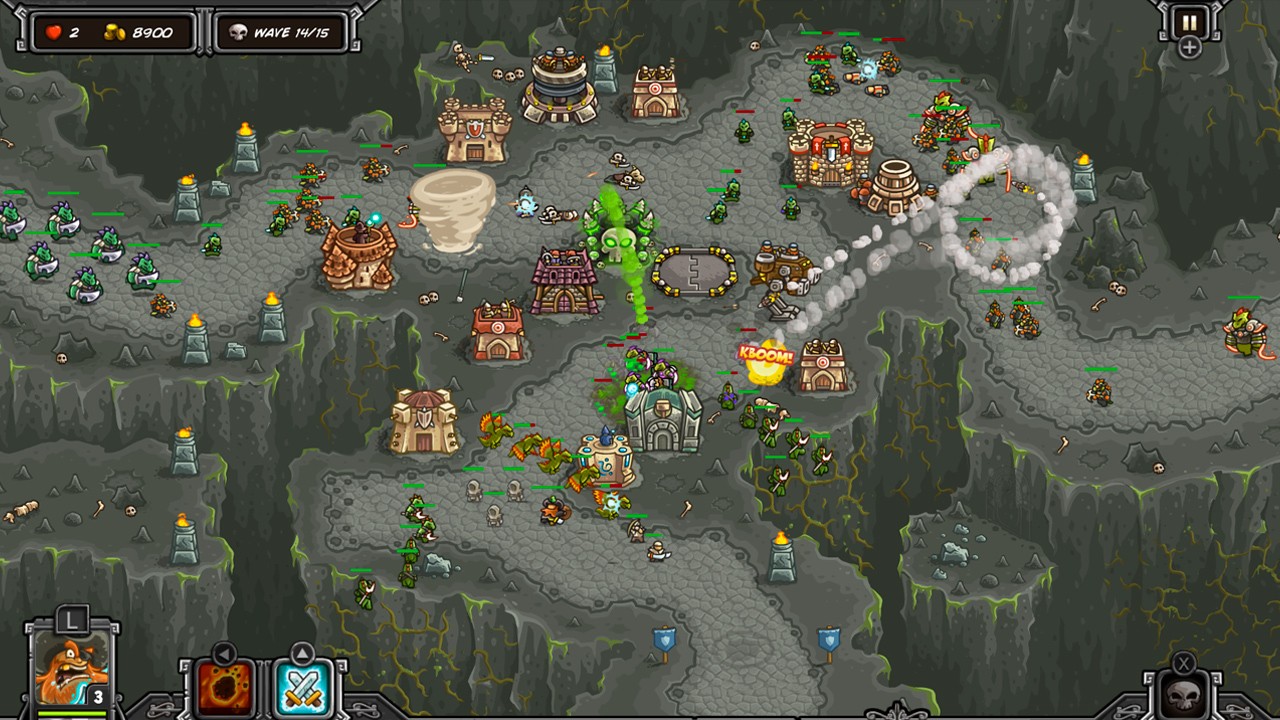 Along with all the different tower specializations at your disposal, there are also numerous heroes and abilities that you can use to unleash havoc upon the impending waves of enemies. All these things, the towers, the heroes, and both global abilities and hero-specific abilities can be upgraded via the world map, by using stars that you gain when completing levels. If you’re not familiar with the way that Kingdom Rush operates, there’s a gorgeous world map where you select which levels of the campaign that you want to play, and you get some snippets of story as you progress. Each level can be played in three different difficulty modes, as well as in two extra modes, Heroic and Iron. These last two offer a tougher challenge, in the sense that you can’t let a single enemy reach the end of the path, you’re also limited in terms of what towers and upgrades you can use, and heroes aren’t available. Completing each level on any difficulty will reward you with up to three stars, and completing that same level on Heroic and Iron modes will also reward you with one star each.

I’ve said it previously, and I’ll say it again. The Kingdom Rush series is the most iconic series of Tower Defense games out there, and their immediately recognizable art style and abundance of pop culture references are only part of the reason. While in the surface they might look like some barebones Tower Defense game, they hold much more than that. It doesn’t matter whether you’re playing on the easiest or hardest difficulty, whether you’re completing every single level on Heroic and Iron mode, whether you want to upgrade everything to the very maximum or just get the bare minimum, or if you just want to play the game every now and then, Kingdom Rush Frontiers once again proves that Ironhide Game Studio has what it takes to keep on making new compelling games.

Kingdom Rush Frontiers once again proves that Ironhide Game Studio has what it takes to keep on making new compelling games.