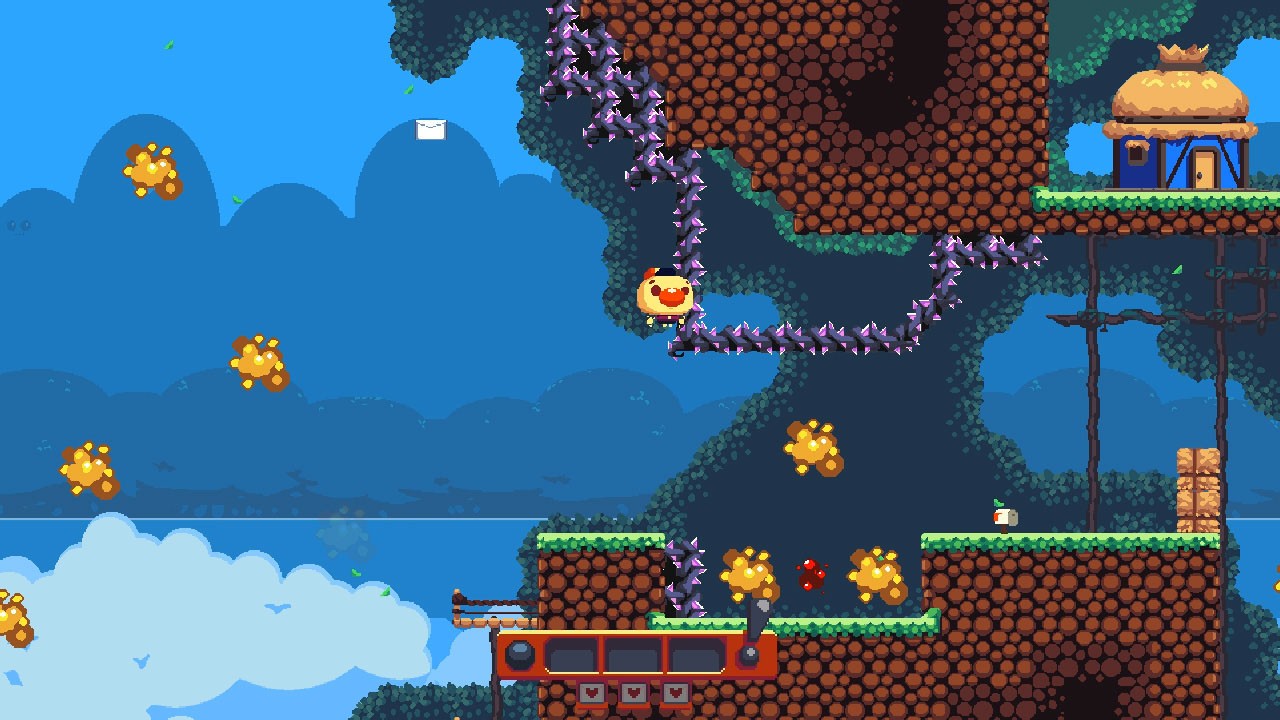 Before you know it, it’ll be Spring and with Spring brings nature’s gifts: longer days, vibrancy through an array of different types of flowers, a new Argos catalogue and of course, sneezes. Yep, Hayfever covers the latter mostly, utilising the faithful sneeze to achieve feats you’d never think one could achieve.

In Hayfever, you play Thomas, the postman. Not quite the same as Pat, but he’s likeable nevertheless. He’s a bit of a die-hard when it comes to his job, but his allergies get the better of him as pollen sends him over the edge. His role in the game is to get through each level, picking up the post he’s lost through sneezing, then escaping in his post van.

There are over 140 levels in total, spread over various times of the year. Each stage is represented by a day of the week, and once you complete seven days in a row, you get a little pat on the back to confirm this, but primarily you play one level after the next, each with increasing difficulty. Hayfever certainly is a challenge, but you have the option of skipping through the levels without collecting all the post. That’s not to say you would do that, but sometimes you just want to progress, and if you get stuck on one level, in particular, it’s nice to be able to come back to it later on. It’s a bit like Super Meat Boy – get to the end of each level, but come back to unlock everything. 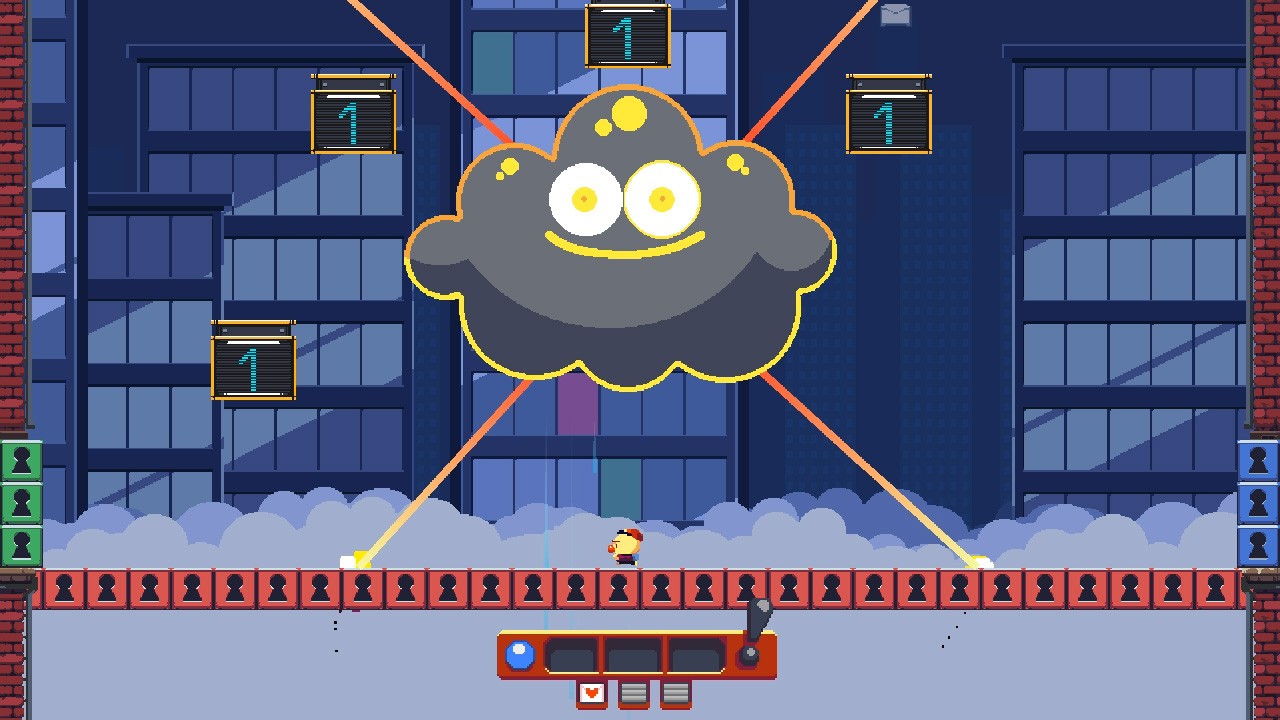 Hayfever is styled on 16-bit classic platform games, so the controls are very simplistic but don’t think that it’s going to be easy. We all know how hard The Lion King was on the Mega Drive, and that was supposed to be for kids. Thomas runs from left to right and reaches for the sky by jumping with the B button. But his real power is the sneeze. By pressing the Y button and pushing in the direction, you wish to go will launch him in the air, making this game go from a simple run and jump platformer to an airborne Katana Zero. He doesn’t leave a trail in his movements, but they can be pretty instantaneous and it’s heavily reliant on timing and precision.

Thomas can perform these unique jumps with a simple sneeze, but very early on, you can jump through pollen clouds that allow him to supercharge his jumps. There’s a gauge at the bottom of the screen that shows your power; the fuller it is, the further you go but be warned: if you exceed the gauge Thomas will automatically dash across the screen which will often result in unwanted deaths. Speaking of death, it will happen a lot.

In Hayfever, there are no lives to collect or health bars. Additionally, there aren’t continues either, so you can effectively play this on repeat. You couldn’t have it any other way as Hayfever is too hard if you only had 3-5 lives to play with. Instead, everything is measured with checkpoints in the form of mailboxes; find the numerous mailboxes scattered across each level, and when you die, you’ll respawn. Thankfully, they’re plentiful at first and to be honest, you need it as later on in the game some of the challenges require perfection, and there’s no dodging that, so best to learn the mechanics early on.

For example, there is colour coded pollen such as the red clusters that propel you forward at an alarming rate, sending you in the direction you jumped into them. In other words, if you jump into the pollen from the left heading right, you’ll get launched to the right. Stand underneath and push diagonally up and left and you’ll understandably go that way. It sounds simple, but in some areas, it functions as a combo with hazards to the top and bottom of the screen, leaving little room for error. In turn, this causes a lot of frustration, and you can go through a chain of red pollen, dashing to the left then shooting up, backtracking on yourself then heading diagonally up and right. It’s hard to explain, but when you have to time the moves to perfection, only dying moments later, it does get discouraging to go any further. Not that you have much of a choice. 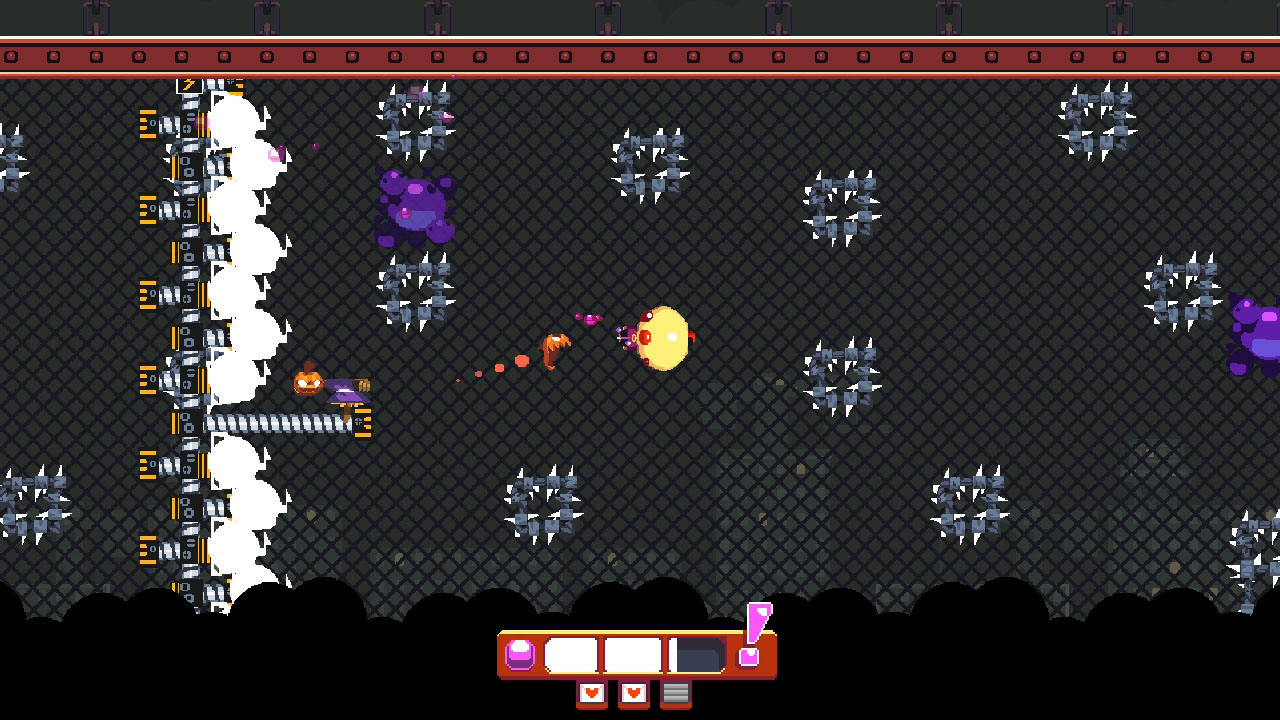 Collecting the letters as an optional path is a good choice as some of the locations are tricky to obtain and to be frank, I doubt I’ll go back to get them as I could see myself throwing the controller with the same velocity as Thomas mid-sneeze. If you collect them all, you’ll unlock further challenges, but as I said, it’s not something I aspire too as it’s just hopping on the fast lane to Frustrationsville. No thanks.

In-game menus and story sequences are a bit no-frills, but they serve the purpose of getting straight into the action. As for the actual presentation, I warmed to the graphics almost instantly, and they reminded me of the classic platform games of the 90s. What started in handheld mode promptly shifted to docked mode as it’s pretty hard to see what’s going on. Hayfever isn’t unplayable on the go, but it’s so much easier to see on a larger screen and if you have one, with a pro-controller. Hayfever can be played with the analogue sticks or d-pad, but my recommendation would be the latter as you need the precision – not just the jumps, but there are a few areas where you need to weave in and out of enemies, and it was too easy to make a mistake with the analogue sticks. Quite frankly, it’s not worth jeopardising it as there are so many times where you collect a hard to reach letter, only to fudge it when walking into the path of a very easily avoidable enemy, then respawning at a checkpoint.

So who is Hayfever for? Certainly for platform fans as it’s, well, a platform game. Despite the cute graphics, it’s not really for younger gamers or even casual gamers for that matter. Even though it’s fair to say you’ll learn the available moves in the first 5 minutes, it takes constant trial and error to master the timing with this game. In some ways, it’s a little like Super Mario Maker 2 user-generated maps as they can be quite brutal and will discriminate against some of the players with, let’s just say – less patience than most. There’s more than enough levels, even if you steamroll through, but the added incentive of collecting all the letters to unlock more challenges should be the drive required for those seeking a challenge.

Despite its cute simplistic graphics, Hayfever is a game not to be sneezed at (come on, that had to be said) and will keep you out of mischief for some time, and probably a better experience than going outside and having actual hayfever. The challenge is tough, so don’t expect an easy game.