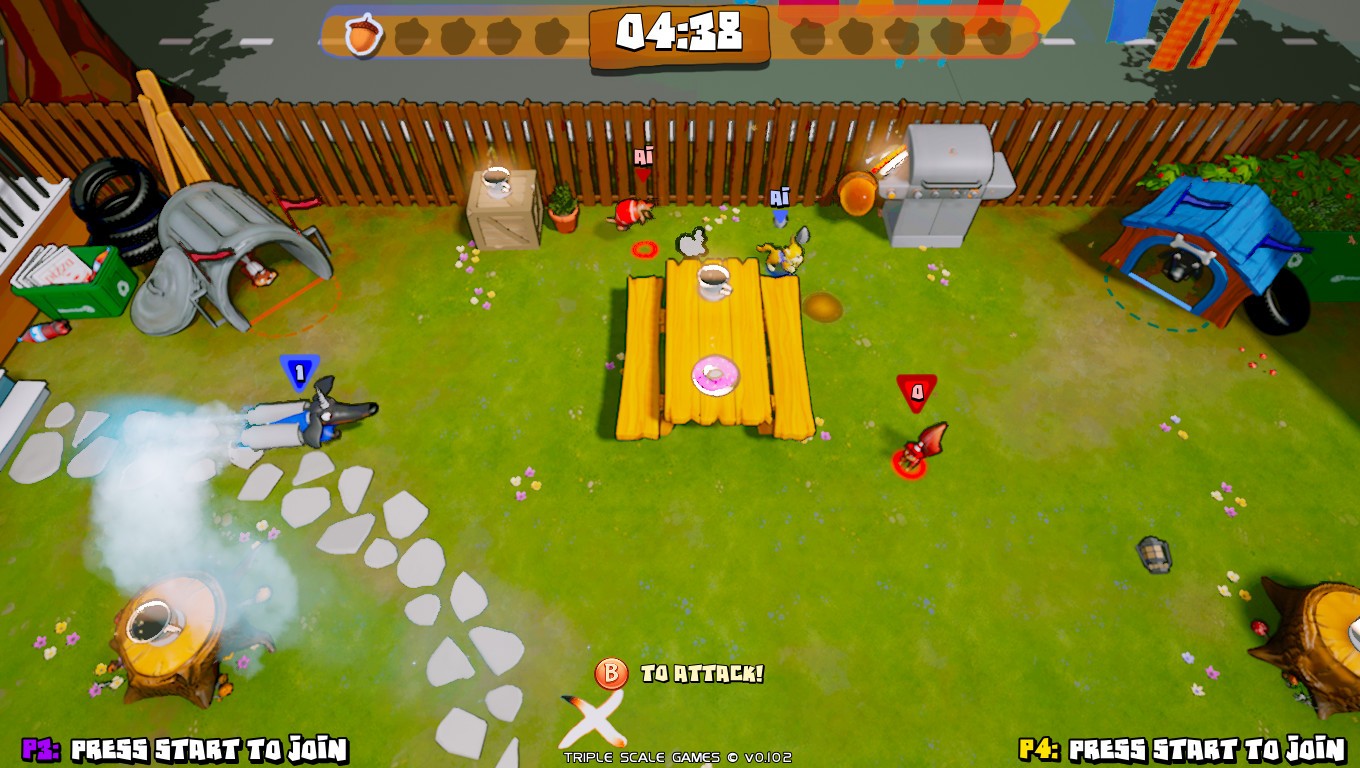 The Multiplayer gaming landscape has evolved massively over the years, gone are the days where a multiplayer experience would only occur around one person’s house. MMO’s, battle royale’s, and servers that can handle 100’s of players all at once, the graphics are amazing, and the action is in-depth. Roll it back to the days of the N64 and the GameCube, and this is what I refer to as your traditional multiplayer platform. Sitting around with friends, desperately hoping that they don’t cheat while you try and sneak up on them when sharing a split screen. Hours of my youth were spent with friends hiding in a darkened living room playing Golden Eye, and I loved every minute of it. I’ve been searching for a new game to relive my gaming youth, something that is easy to play, fun, and colourful. Triple Scale Games gave me the title I had been looking for, Save Your Nuts.

Save Your Nuts is a physics based competition, where the squirrels have organised a tournament against the other animals. You must collect nuts and boosts to help your team to win each round. The action takes place across a number of venues, each with their own characteristics and look. 1 to 4 players on each team must attack the opposition to gain the upper hand. You have the option to play either online or locally, if you chose the local option you can pad out the teams by using Bots. There are 3 game modes to choose from; Capture the nut, Battle, and Thieve. They are all pretty self explanatory, my favourite was Battle where you have 3 balloons above your head, which represent your lives, survive with any of these intact and you win the round. It was hectic but great fun. The amount of angst it caused amongst my friends really captured that traditional multiplayer action.

Whenever I play a game that has a lot of the fast paced action taking place in one small area, I look for a number of key elements to be present, and these are that it’s easy to identify your character, the gameplay mechanics are straightforward, the controls are simple to handle and finally, that the arenas you are playing in are both interesting and fun. Luckily for the developers, they ticked most of those boxes. Let’s look at each of these requirements in a bit more detail. 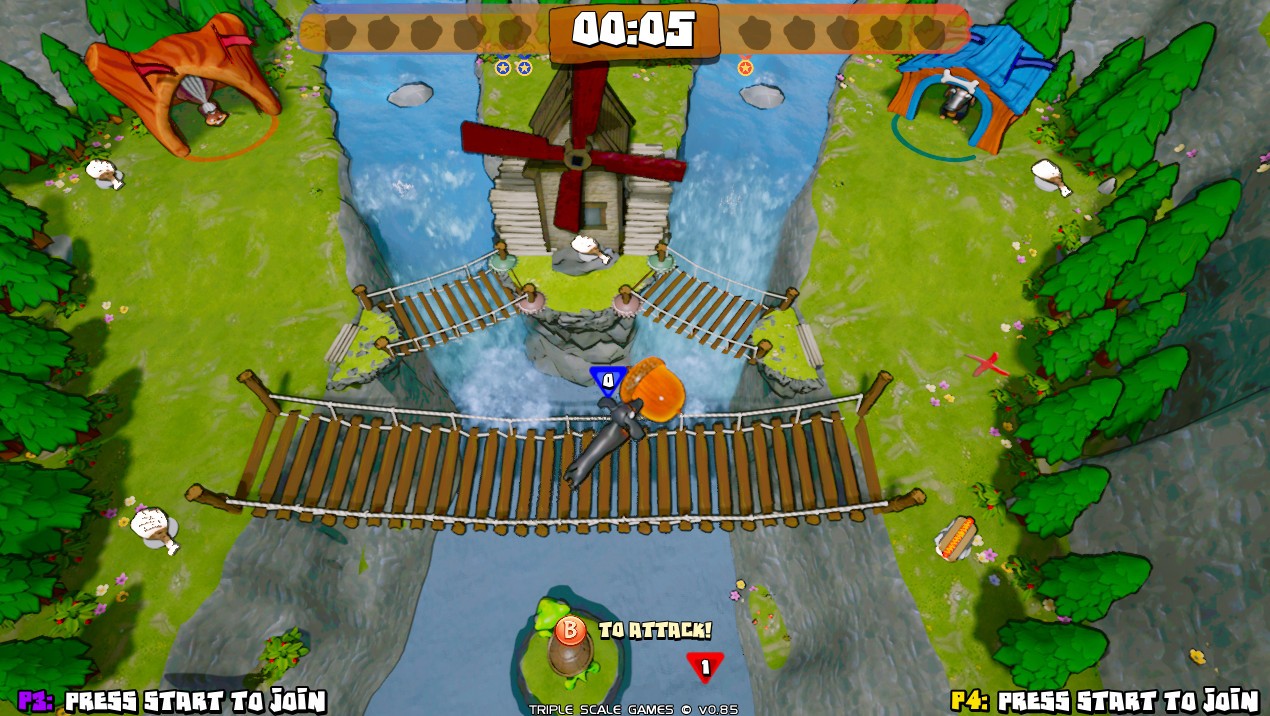 The graphics are bright, colourful, and simple to look at; the cartoon style matches the theme nicely. When I first started playing, I tried a 1 vs 1 game just to get used to what was happening, the action was easy to follow, and I had no issues. The gameplay was smooth, and there were no graphical glitches. As I added more teammates, I struggled to be able to identify my player, even when I utilised the character customisation mode, everything blurred into one. I ended up having to just mash the buttons and hope to survive the battle. Though it wasn’t always obvious if you were winning, it didn’t take away from the fun. If anything, the madness made it more amusing, and the arguments that were had amongst team mates were also equally as funny. I spent a fair bit of my time playing against the Bots, as such I was able to discover a glaringly obvious glitch. When the computer players tried to run up the steps or ramps, they would vibrate on the spot and spin around in circles, it was odd and made the game feel unpolished, I’m not entirely sure how the developers missed it, as it happened in nearly every match I completed.

The main premise is extremely easy to understand, effectively move the nuts from the arena to your den. As already mentioned, this took two different approaches; simply grab the nuts and take them home, the second is to steal the opposite team’s prize possession. The last mode is more of a battle royale, and there isn’t a nut in sight. They all have the option to use boosts, these are found around the map, and are represented by snack foods, you will be gifted with a short term; shield, speed increase, or additional strength. Each of these can be a game changer so they are worth the effort it takes to collect them. Triple Scale Games did a great job of making it so simple that as a gamer, you have nothing else to focus on except your own game plan, and winning each round.

From the main menu, you are given the opportunity to experience an extremely short tutorial. The controls are so simple that this can be completed in less than 30 seconds. The movement is smooth and super responsive, the attack hit box is relatively small, so it does take a little bit of getting used to, but once you have this perfected, then it’s game on. The simplistic nature of the control system means that anyone can pick up a controller and be competent within a matter of a few minutes. I found the passing and lobbing methods quite hit and miss, so I generally just reverted to a punch and run technique, I liked that there were several styles, this added variety, and helped to mix things up and increase the game’s longevity.

You could be worried that playing this could get boring, ultimately all the action revolves around 3 modes that can be finished within a matter of minutes. The developers overcame this by creating a number of different venues to experience from a backyard, a rocket launching station, an ice rink, a pirate ship, a waterfall and a number of other scenarios await you and your team. Launch the rocket, unleash a spiked roller, fall into the ice and walk the plank. All these spice up the action, and make each level unpredictable, it was a genius move by Triple Scale Games. 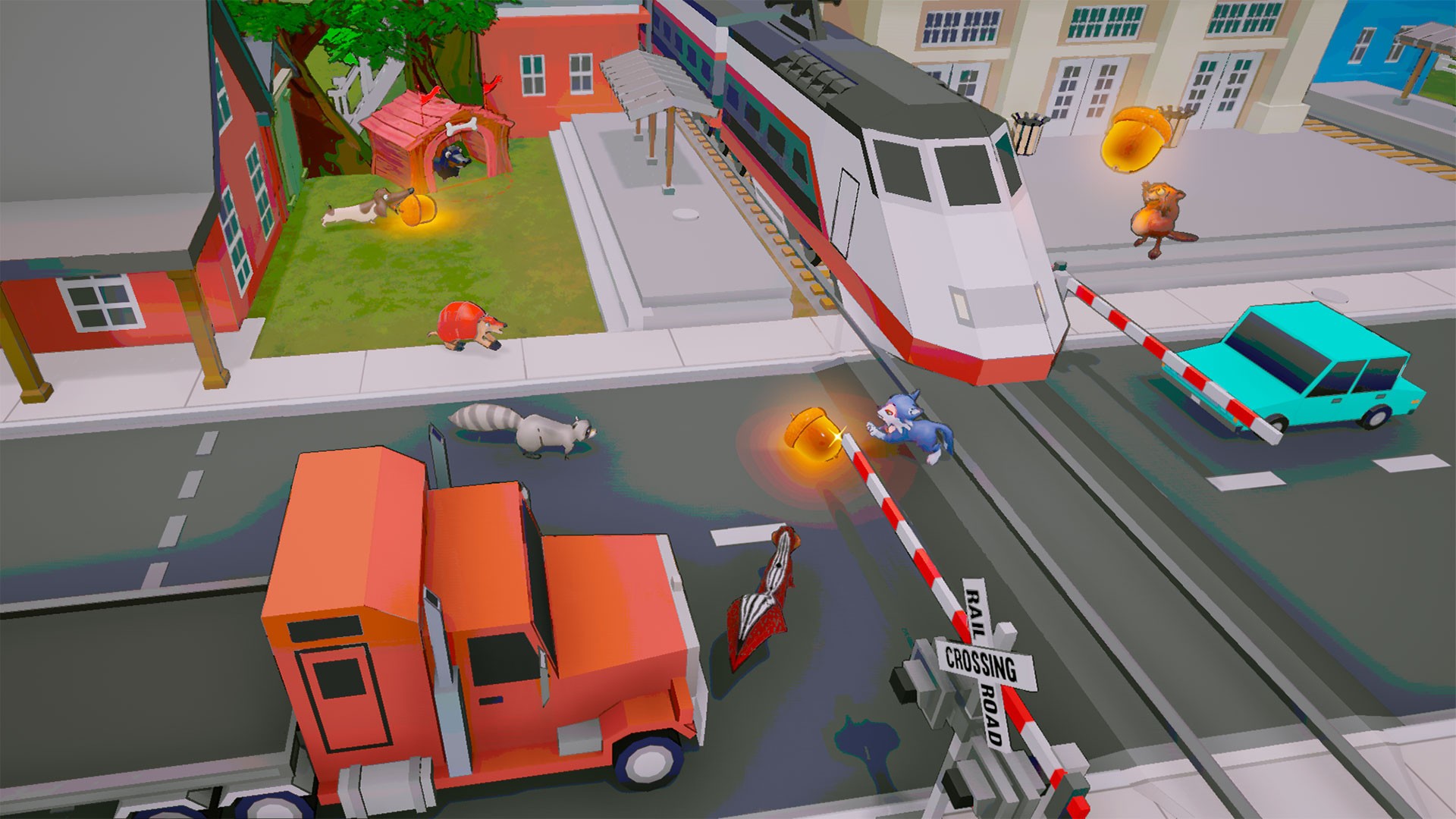 After a fair bit of time it was obvious that the audio wasn’t the main focus, this doesn’t mean that it’s poor, because it isn’t. The music tempo is high, as you would expect from a game with lots of quick action, and the character sound effects are good. I found that it just faded into the background, and didn’t really stand out, unlike many of the other elements already mentioned.

When there is no solo gameplay, and all the action is entirely reliant on a multiplayer platform, it’s going to risk its longevity and replay factor. Do I believe that this game has enough about it to make players want to come back for more? That really is going to be heavily dependent on how many of your friends will want to take the plunge and get a copy. Playing against the computer is fun, and challenging, but it has its limitations, once you identify how to exploit their weaknesses then victory is all but assured. To obtain all the achievements you will need approximately 1 to 2 hours, and oddly 5 controllers. Based on this figure, it doesn’t represent great value for money, but as I have already highlighted you could have a great group of friends who all love it, and this could turn out to have many hours of exceptionally fun game play. I’ve certainly enjoyed the time that I have invested with my family and friends.

Old school multiplayer games are a rarity, as such its refreshing when one is brought to the market. For those of us who are old enough to have experienced them first time around, this will bring back fond memories. However, for the new generation of gamers who have always experienced vast landscapes, and a multitude of tasks and quests, they will possibly never understand the enjoyment that can be had from such a simple approach. Save Your Nuts really is fun to play, even if it’s just for a short period of time, the variety of game modes and venues keeps the action fresh, and it’s simple approach makes it accessible to all. It will have a limited audience, and as such I don’t think it will be as well received as it deserves, its a shame as a dying breed of game just gets another nail in its coffin.

Save Your Nuts Review

This Multiplayer focused game will have you competing against friends and bots to battle it out to collect nuts and win tournaments.