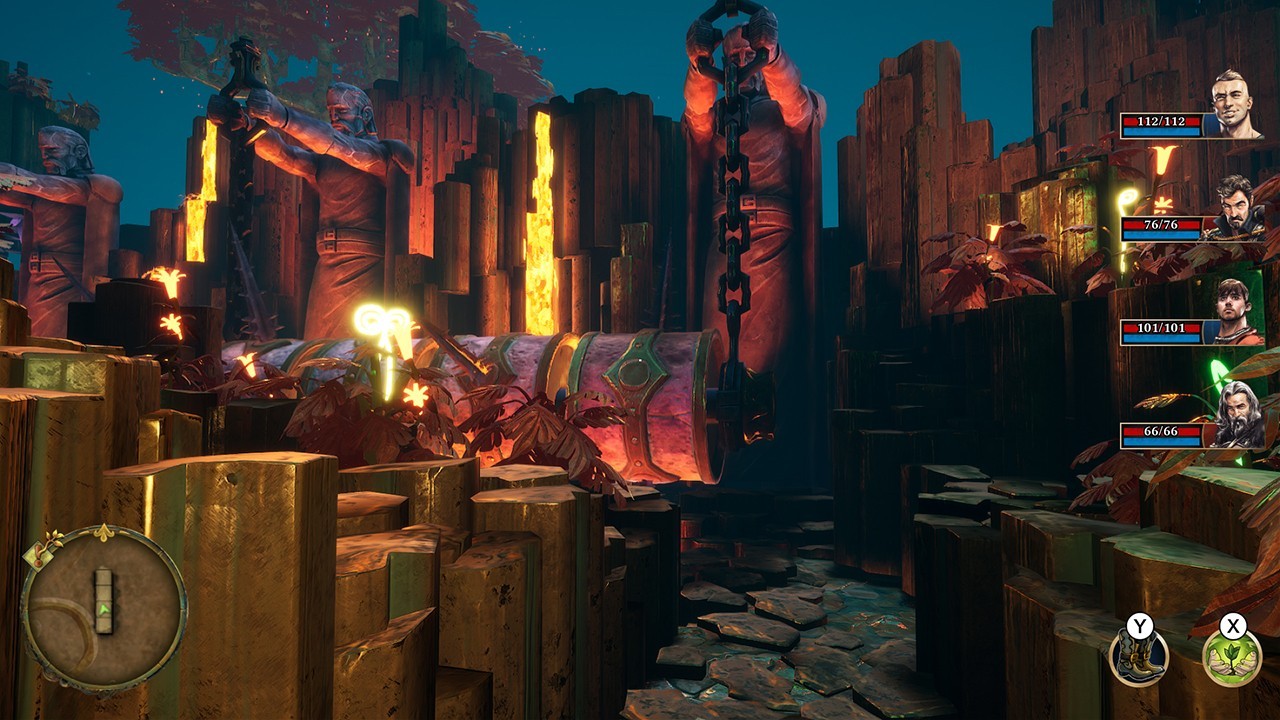 I would probably say that one of the oldest genres within video gaming has to be the Dungeon Crawler. From their origins of text-based DOS adventures to the 8-bit pixellated corridors to the more modern and detailed variants of today, there’s a certain appeal to treading the dark-dank labyrinths that are full of suspense, surprise and horror. However, over the years, Dungeon Crawlers have often been just that; the exploration of the interiors of dungeon-styled levels which, in the long run, can become a little tiresome. In order to bring something new to the mix though, Zen Studios have brought a whole new epic adventure that incorporates both external and internal locations, as Operencia: The Stolen Sun sets a release onto the Nintendo Switch.

The game begins with you playing as King Attila, as both he and his wife, Reka, set about sealing a portal to the underworld that has brought an infestation to the land of Operencia. Acting as a prologue and tutorial, this short level brings an introduction to the mechanics and movement of the game as a whole. Even as an introductory level, the game instantly throws you into the midst of action and exploration, as well as pitting your wits against one of the game’s many puzzles. Despite some issues with the long-distance rendering of the landscape, you can’t help but admire the graphical qualities of the presentation from the get-go. Lush and detailed settings reveal themselves around you, from the burning forests to the glistening waters that house swimming fish, to the grid-like movements that allows 360 degree views; all of which flows a fluidity, rather than the stop-start mechanic often associated with the genre.

After this brief introduction, you then get to create your own character before you embark on a massive quest from the sunken ruins of an old castle and across the overcast lands of Operencia in order to free the sun king Napkiraly from captivity, as well as retrieve the legendary sword of King Attila. Viewed from a first-person perspective, you guide your party through a variety of locales on a grid-like setting, but one with fluid camera and character movements around the scenery. As the story unfolds, through of series of still images and fully-spoken narratives, you’ll explore dense forests, shrouded swamps and derelict dungeons; uncovering and revealing the secrets hidden within. In fact, exploration is a very important part of the game, making it vital that you check out every square within the grid to ensure that you find everything that the game has to offer. 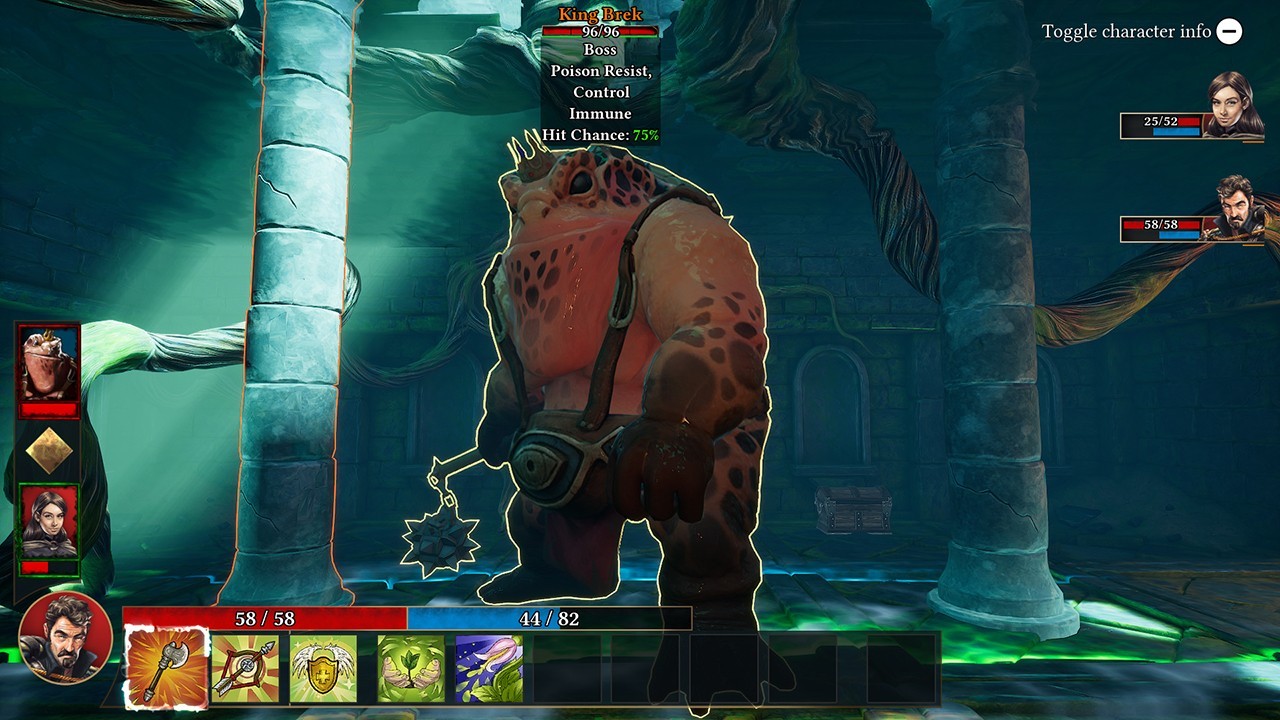 Each locale also houses a number of environmental challenges and puzzles that need to be overcome; many of them requiring a solution of a particular object that you may or may not have found within previous locations, or ones yet to be discovered. There’s a real intricacy to the level designs, puzzle solutions and items to be found, making this particular quest a fully-fleshed adventure full of wonder and surprise. This is all further amplified by some really interesting locales and detailed environments that makes exploration a real joy. Along the way, though the expansive levels that await you, you’ll also come across a variety of enemies, adding a level of combat that is surprisingly robust and entertaining to partake in.

Instead of the usual random-encounters found in many dungeon-crawlers, there’s a much more tactical approach adopted here. Any enemy engagement can be simply avoided, whilst others can’t be helped, but interestingly, you can apply your movements so that you approach from behind or execute a surprise attack, sneaking up on them to allow you the first move, as well as gain a boost to your stats in order to give you the upper hand in battle. Enemy encounters can bring any number of foes to the table, each one lining up along layers of colour-coded lines that demotes varying ranges that can attacked. For instance, Enemies lined up along the yellow bar are susceptible to short-range attacks, green for mid-range and blue for long-range.

Using a turn-based mechanic, each character within your party and the enemy units all takes turns to attack or take a more defensive stance. When it is your turn, your specific character is presented with a choice of combat moves. Along a grid of options, you can select from three basic attack styles and up to six other, more specialised skills. These can range from melee, magical and area attacks, as well as a variation of ranged styles. Picking your style of attack becomes important, as different ranges have different effects according to what combat move to perform. As well as these, you can also pick a more defensive stance, as well as issue buffs or cast certain attributes that can have an effect on the enemy that faces you. 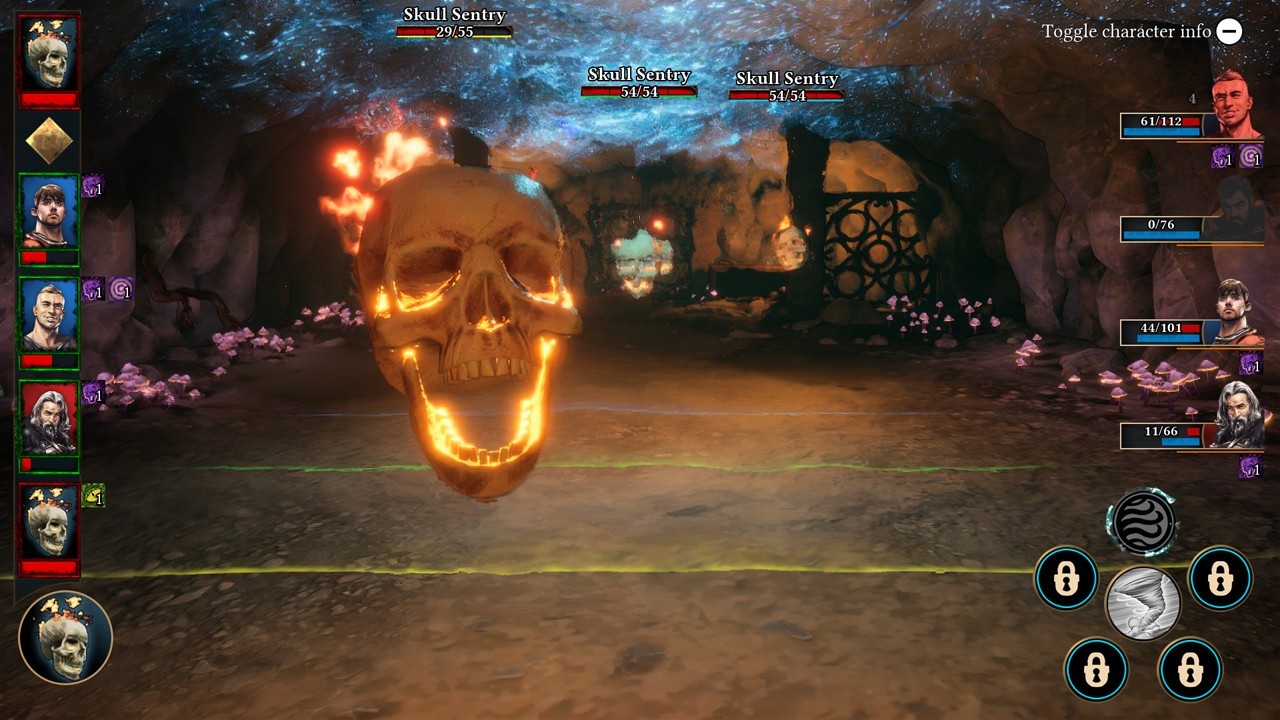 As you progress through the game, fighting in combat, exploring levels, solving puzzles, revealing secrets and opening treasures, your party members each gain XP that goes towards developing a number of extensive skill trees. Between certain bouts or events, you can also rest your party at campfires in order to heal any wounds, level up characters and abilities and create potions. Some camps also house merchants from which you can buy weapons and armour with which to equip your party. There’s an absolute wealth of options around varying weapon types, as well as a host of recipes that can be found within levels for creating specific potion types. It’s simply staggering and is a rewarding prospect that drives you deeper in the dungeons that await.

Within the thirty or so hour campaign on offer here, the simple level of details will simply astound you. From the gorgeous sceneries and detailed locations, to the tactical combat and perplexing, but never frustrating puzzles. There’s so much to see and do, even down to some of the minor things, such as enemy behaviours, all add to produce a smile across your face as you play. Some of the real high points of the game also come in the form of some truly memorable boss fights that requires the most tactical thought of play to emerge victorious. Technically, the game performs perfectly as well, which is quite an achievement when you consider the level of detail within the game. It also has complete touch-screen implementation to add a finer level of detail to some of the game’s more intricate moments.

Overall, Operencia: The Stolen Sun is one of the best examples of dungeon-crawling I have ever come across. From its thoroughly engaging narrative to its beautiful-looking vistas and dungeons and satisfying combat, this is a game whose elements all combine to produce a spell-binding adventure in everything that it does. It fully rewards exploration and its fleshed-out adventure feels truly splendorous and epic in its presentation. Sure, it has graphical downgrades when compared to other versions, but on the Switch, this is still a gorgeous looking game, one that holds a ton of secrets waiting to be discovered and a whole host of enemies and boss fights that feel truly spectacular. If you’ve grown-up around dungeon-crawlers, then you can’t afford to miss this brightly shining star within its genre.

Operencia: The Stolen Sun shines brightly within the genre of dungeon-crawling adventures.