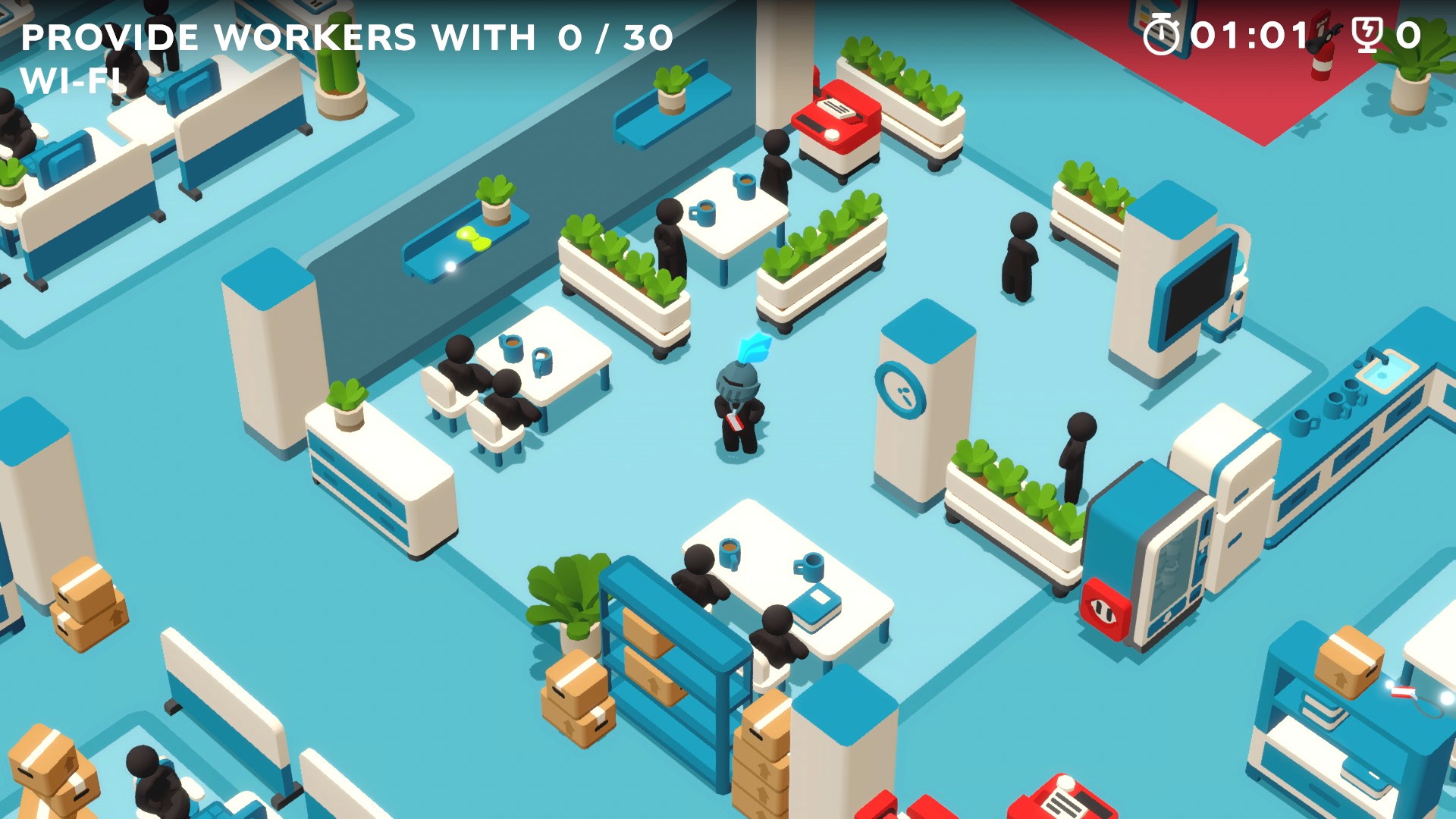 The concept of Good Job is cute, if somewhat a bit depressing. You are the slightly brain dead son of the all powerful CEO of a company. You mean well, but you’re incredibly inept and don’t seem to grasp how to execute a task without royally messing everything up. Your father wants to make sure he’s creating a good future for you, and the only way to do that is for you to prove yourself. In a real Billy Madison style approach, you’re tasked with working your way through every single job within isn’t he building, starting at the bottom and making it up to the top floor, running all sorts of errands and missions with gusto, aplomb, and a somewhat hilarious indifference for destruction. After all, you’re the CEOs son: who the hell is going to say that you were bad at what you did? It’s the ultimate in nepotism as you fumble, smash, destroy and deviate the office around you in an effort to prove to your dad you’re not a total disaster: just a colossal one.

Good Job is a puzzle game of sorts, wherein you’re assigned a simple task that you need to perform in order to help out the office. This can be something like getting a new projector, gathering together workers for a meeting, crushing a worthless palette or something in that vein. You start with very simple ideas and commands of being able to pick up, put down, and drag things, and the game really lets you feel out how these commands affect the world around you. For example, on the early floors, you can’t just push around workers who are in your way, but, if you can get them to sit down on a chair or a couch, you can move the furniture and them by proxy, allowing you to free up hall space. Additionally, you notice that small objects can move over extension cords without hassle, but larger objects get caught in a slingshot-like trap, causing them to rocket forward at terrifying speeds the second you let go. This is how I figured out that a copier, when angled properly, can break down an entire set of walls and make it a lot easier to move objects into other rooms. 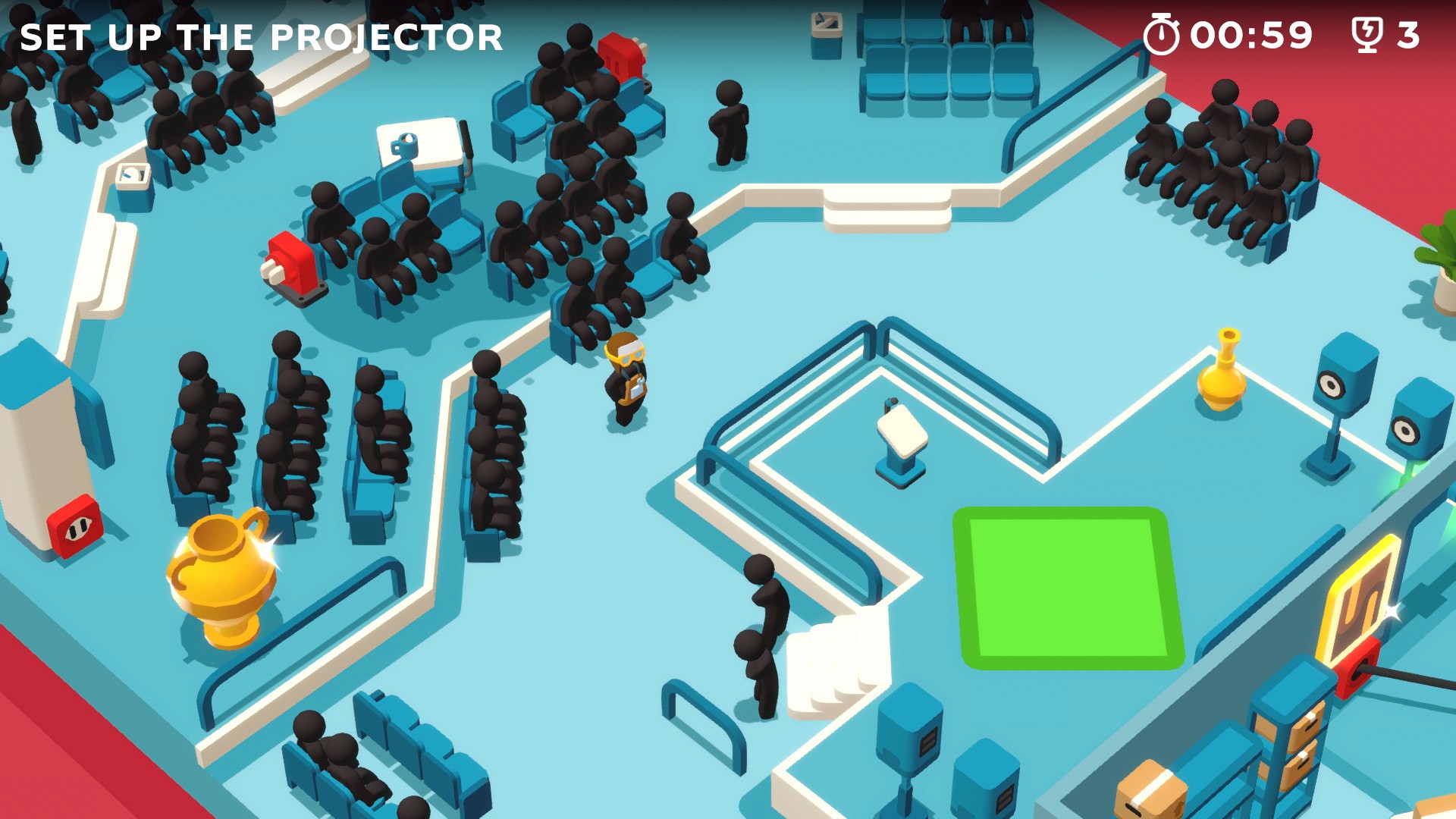 Yes, Good Job plays around a ton with destruction, and it’s a better game for it. The level of havoc that you can create in a single office is legendary, and it’s tempered by three important factors. First, you don’t hurt anyone, which is critical to keeping the tone of the game light and fun. No matter how many things you destroy, there isn’t a single event that hurts another innocent coworker, so you don’t need to worry about that level of madness that needs to be shielded away from innocent eyes due to wanton violence. It does, however, give permission to players to be even more reckless with their decisions, which leads to the second point: the damage cost. As you keep moving forward with your plan, you have a running tally of what the bill is going to be on your “solution.” Sure, knocking over a desk or breaking a coffee mug might only be a couple of bucks, but there’s also expensive office equipment that you don’t need and probably shouldn’t break. Additionally, golden, clearly valuable artefacts are strewn about, and you can rack up hundreds of thousands in costs due to not being careful, and I do mean careful. Most of these items aren’t even in the line of sight, so you really need to be unhinged to break them. Thirdly, and most important, is that damage does affect your overall rank for the end of the level. Too many broken things, or too many valuables destroyed, and your letter rank will be deeply affected, though, arguably, the time is the most important. 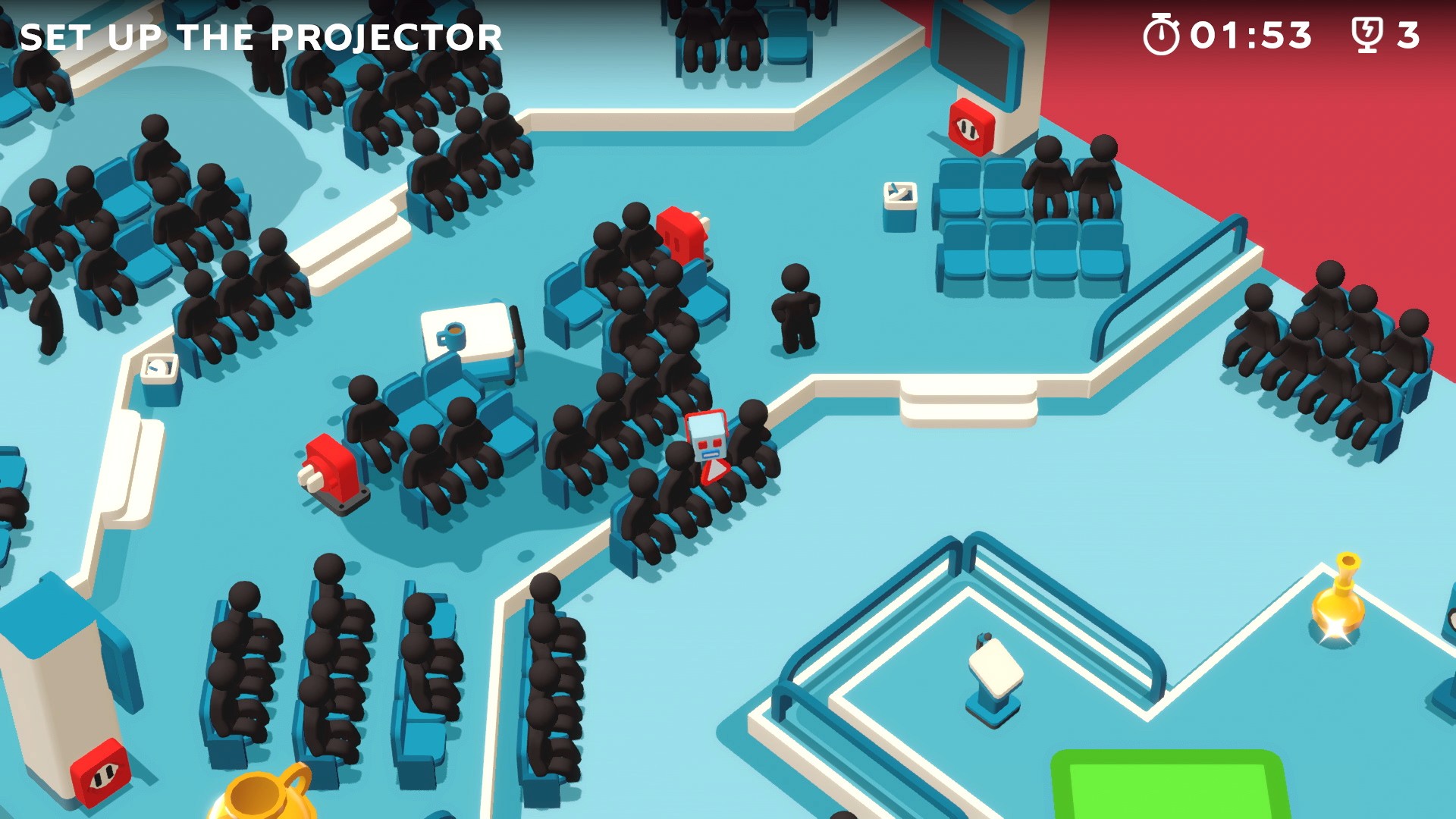 The damage mechanic of Good Job is probably the crux of the game and why people will want to play it (since the graphics are incredibly simple stick-like figures and the music is cute but not exactly memorable). As a result, the balance that it brings needs to be addressed. There is a sliding scale of acceptable damage that is invisible to the player, but seems to have a different gravitational importance from level to level. Early on, you’ll be able to destroy almost everything and still get an A, as long as you don’t take too long. The first two floors care more about time than anything else. It feels, initially, like the nepotism of the game is taking too strong of a role in your success, and it can make players lazy. However, somewhere around your second audition (which involves a lot of cranes, forklifts and crates), the damage and destruction take a heavier toll…for that particular stage. If you pass and get onto level 3, you’ll find that at least one of the missions doesn’t care, again, about what you do, as long as you get it done. At this point, you begin to realize: there’s something very clever here. See, when the boss’ kid screws up a ton on nonessential tasks, there’s not a lot you can do: he’s the boss’ kid, and he did, technically, do the job. But the auditions, which are needed to promote the character to the next level, need to be more optimal and tight because other board members are probably looking in. In theory, that means these levels should have a higher failure rate and prevent players from moving on, thus showing the true duality of the office space. Instead, it’s next to impossible to “fail” a mission: you can get some low grades, sure, but you still pass. This might dissuade some players from wanting to keep playing because the entryway for success is so low. I, on the other hand, was elated to have a place where I could be an almost purposeful royal disaster and still get praised.

That’s sort of the heart of Good Job, and I wish to God I had someone to play this with right now, because it’s so damn funny and I guarantee that the co-op missions must be even better. The tonality of this mischievous, obtusely destructive game is light, fun, and perfectly silly, and that’s exactly what it sets out to be. Why not embrace and enjoy a chance to fail upward with alarming acceleration? Why not force a bunch of grunts to sit down on a couch and then drive it around the factory on a forklift? Why not create a slingshot and see if you can destroy five cubicle partitions with a well placed copier? It’s silly, the price is right, and the performance is spectacular. Sometimes a pipe is just a pipe, and sometimes flooding the basement to get rid of the rats earns you a pat on the back and a brand new hat (collect all the hats!). Good job.

You know what, Nintendo? Good job!