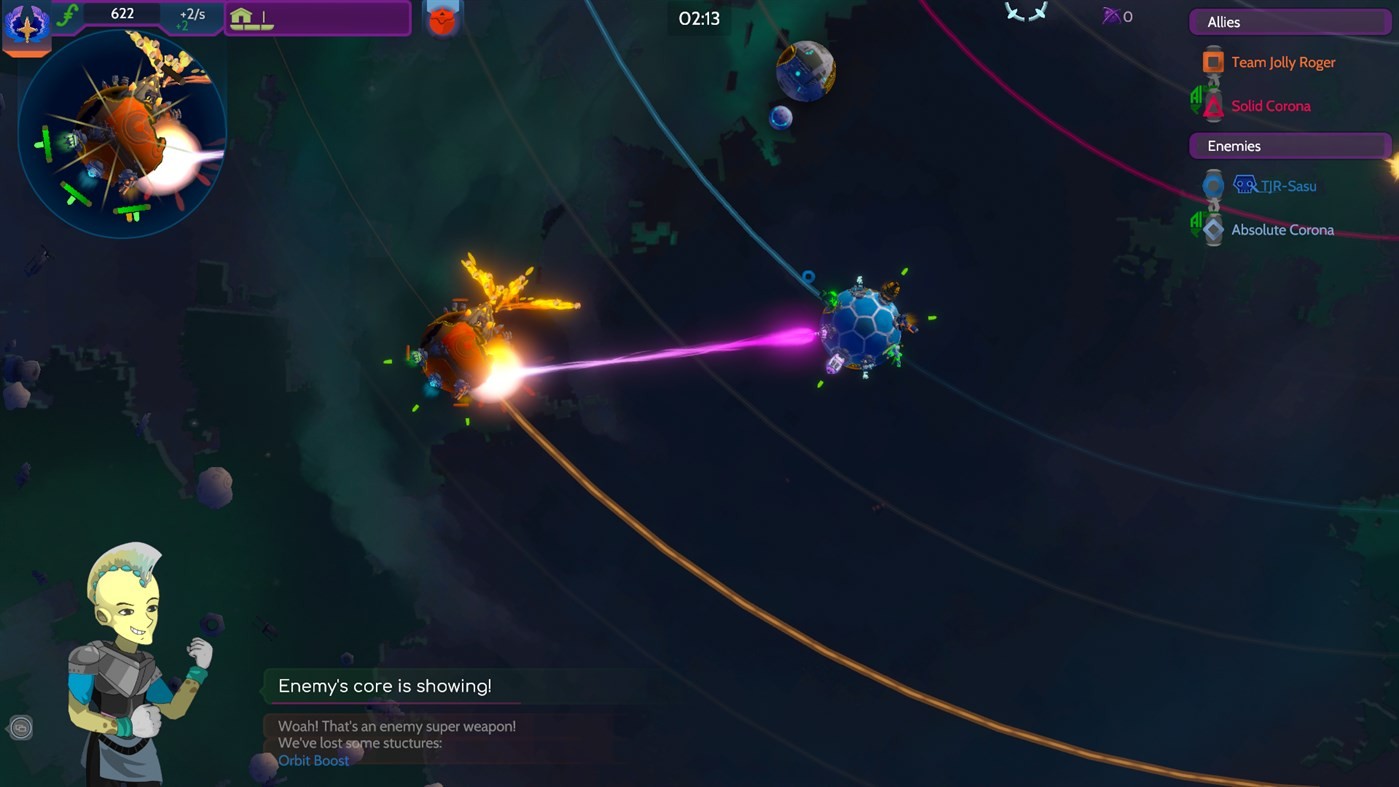 The genre of strategy games has a long list of sub-genres; real time strategy, turn based, slow down, 4X, tactics, and so on and so forth. I can see why players find the continuous additions tiresome and confusing. Most fans will stick to the tried and tested franchises, they know what works for them, and therefore don’t want to stray too far from their comfort zone. I’m quite the opposite, I like to try something different, so when I was offered Worbital by Team Jolly Roger, I couldn’t resist. It’s a real time strategy game set in space. You must complete a set objective all from the comfort of your own home planet. You may be thinking, well, what’s the difference here? A strategy title set in space, wow! The game map is constantly moving, you must work with gravity and the planets natural orbits in order to achieve your goal.

The opening scene is a prologue which sets the tone for the entirety of the story. You are introduced to the ruler of the world, she is advised by her 2 close friends that she will run out of resources in less than 20 years unless something is done. A plan is hatched to gather resources from other worlds. The 2 advisers are sent to colonise another planet using ancient technology created by their ancestors. From here you will learn how to build structures on your base, you are introduced to the gravitational curve, and you will be shown how to make funds. The tutorial is done at a wonderful pace, and you really do feel comfortable with the game’s basic principles. Like all great stories, the plot has twists of betrayal. Worbital’s storyline is no different, your closest advisers and “friends” betray you, they are now your enemy and form one of the 3 factions which you must fight.

To ensure that the action is unique to each faction, the developers ensured that each has different strengths and weaknesses. You are not told what these are, and for the most part you find out the positives by experimenting, and the negatives are usually discovered at the worst possible time. This title really is an unusual twist on the genre, you have limited requirements to build an army, occasionally you will be asked to build ships which you can control, but for the most part the action is controlled from your planetary based weapons. Base building is reduced to approximately 8 slots per planet. You will have the option to place different tiered weapons, defences, or refineries. Planning for placement has to be spot on, not only do you have to consider your planet’s orbital path in comparison to your enemies, but you also have to consider the spin of your own axis. A weapon may be perfectly placed one minute, and the next it’ll be on the dark side of the world and absolutely no use at all.

It all sounds rather complicated, I assure you, it really isn’t that bad, each stage of the game is balanced extremely well. It may be challenging, but it’s never unachievable, a little bit of practise and you are able to complete each level without too many problems. What may be an issue for a number of players is the extremely slow nature of the game play. You must wait for the worlds to align, and your artillery to charge, this really can take some time. Most missions require you to destroy the oppositions planetary core, this requires a careful aim, and multiple clean shots. You will soon find out that you will be floating past one another numerous times before this goal is achieved, so get yourself comfortable, in order to complete the latter levels you are going to require some patience, and plenty of time. 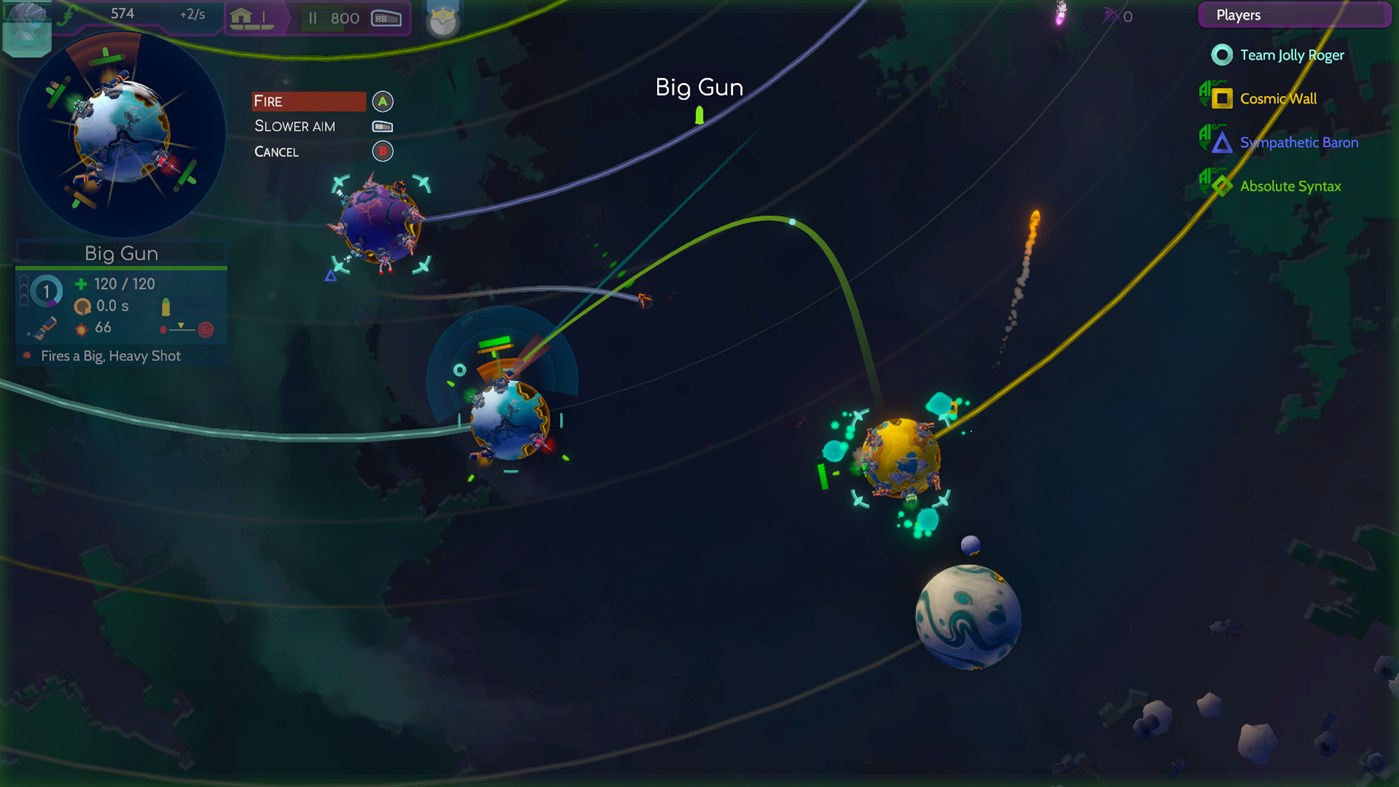 The story is split into 3 sections, one is reserved for each of the factions, and highlights their response to the war that they are currently engaged in. Each element is narrated exceptionally well, the written text is witty, and ties in all the areas from each play through. You will find that once you are accustomed to how the game mechanics work, each will be completed quite comfortably. I personally found them all quite difficult, mainly due to the amount of time I needed to put aside to complete each level, also I struggled with keeping on top of all the action. I did manage to finish the game, but it was a bit of a slog. I absolutely enjoyed the difficulty, I just think it probably plays better on a PC than it does on a console. Just to make it slightly more challenging the developers decided to spice things up by adding a hard mode. The extreme level for each group is off the scale difficult, and this was where I drew the line. I like the controller I’m using, and this mode was one more planet explosion away from making my controller explode in anger. Anyone wishing to take on the challenge, best of luck and remember not to throw your accessories in a fit of rage.

I always worry when picking up any strategy game for console, will the User Interface be too complicated? Will I be able to concentrate on the action unfolding on the screen? Luckily Worbital was relatively easy to handle, each occupied planet can be quickly selected, and all the information for it will be seen in the top left hand corner of the display, all sub menus are easy to navigate. As a player you can simply concentrate on your plan of action, and how you are going to execute it. The graphics aren’t the most advanced that you will see in a game in this genre, but they are very good. Plotting your attacks was an easy task as a clear blue line showed the trajectory of any weapon. The variety of buildings were hard to identify, I don’t believe they made them stand out enough, at a quick glance I struggled to see what I was selecting, but as already mentioned, time is on your side, so it didn’t really have any impact. The cinematic sections were shown with small amounts of animation, the images were similar to those found in comic books. They were designed in such a way that you could see the emotion of the scene without having to read too much of the text. The comic feel leaked into the game design, and the colours that were used were bright, the explosions of the planets were over the top, and the weapons reminded me of the creations from my imagination when I was a child. I really enjoyed the visual presentation from Team Jolly Roger.

A rather Sci Fi theme runs through the audio, heavy bass and haunting percussion sounds are played continuously. The tempo of the music adds tension, strangely the sound is really strong and obvious, but after a while you forget it exists, and it just blends into the background. The dominate area is the sound effects, they are straight out of a Star Trek audio file. The screech of the lasers firing through the air, and the deafening explosion of planets, all work in perfect harmony. 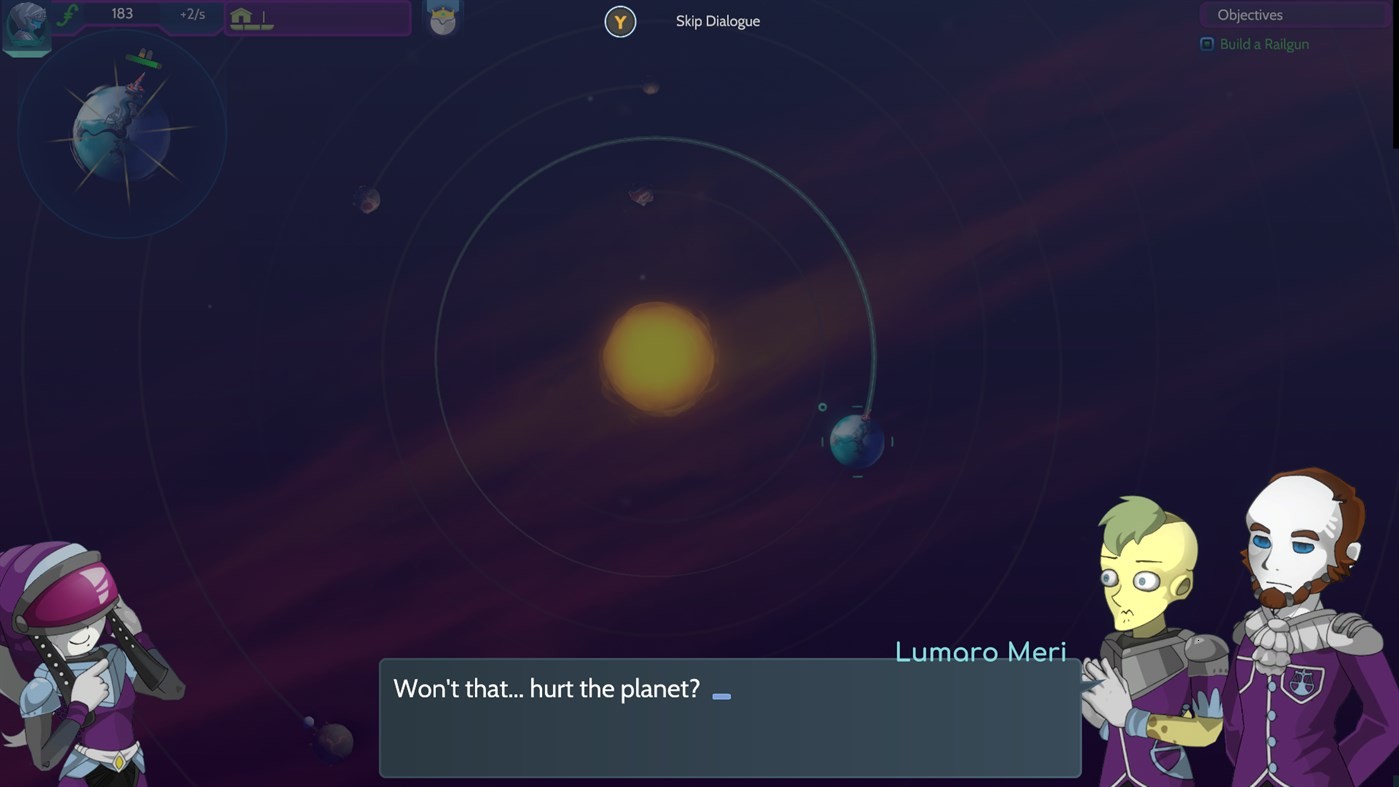 With the potential of all your action taking place in a short period of time, you are going to want the controls to be simple to operate. Luckily Worbital has resisted the urge to create multiple sub radial menus. As previously stated a planetary image appears in the top left hand corner of the display. This image helps you to identify what weapon you are using, a simple use of the analogue sticks will allow you to focus your killing machines on your target, and one press of a button will release your missiles. Death and destruction really is as simple as that in this space strategy game, everything else is just a smooth, looking around your solar system, and zooming in and out is straightforward and quick. The ease of the control system helps to keep the action balanced, as you up the difficulty the computer players really become a handful. This simple approach helps you to counter their newly increased skills.

The joys of playing a strategy game, is the replay factor. Worbital only has a short story mode, so can it encourage its player base to keep returning for more? The developers created a multiplayer mode to ensure that people would still want to play when they had completed the main game. This is great I hear you say! Unfortunately, it’s not. The amount of people playing this title is so small that I was rarely able to play a game against another human. I was only successful once, and that was because I begged my own brother to play. It’s a shame as it plays brilliantly, and was an extremely tense experience. Due to the slow game play model it also made it quite a sociable experience. It is such a waste of a potentially brilliant title. For those of you who are not interested in online play, you can challenge yourself to destroying the AI, or you can just repeat the main missions. If you concentrate your time purely on the story, you’d be looking at around 15 to 20 hours to complete it. If you add the extreme mode, then I’d say you’d be up by about another 10 hours at least. It represents great value for money, and well worth investing both your money and time into.

This would be a rather short but sweet venture into the space real time strategy market, if it wasn’t for the fact that most stages take an age to complete. With very little in depth customisation, other than to alter your factions arsenal, you may be left feeling that you wanted more input into how to plan your battle. The use of gravitational pull, and the axis of your own planet make for a complex and interesting problem for the player to overcome. So was this worth my time to play? I’d say absolutely, the core principle is good, and the delivery of the gameplay works well. If the fan base was larger, the multiplayer aspect would be fantastic. As it is, if you like playing the game, then you are going to have to convince your friends to spend their hard earned cash on buying their own copy, just so you have someone to play with. Time to pick a side and show the others who is the boss of the universe.

A real time strategy game with a twist. Choose your faction, and destroy every other planet in sight. Time to take the fight to your enemies, this isn’t just war, this is Worbital.