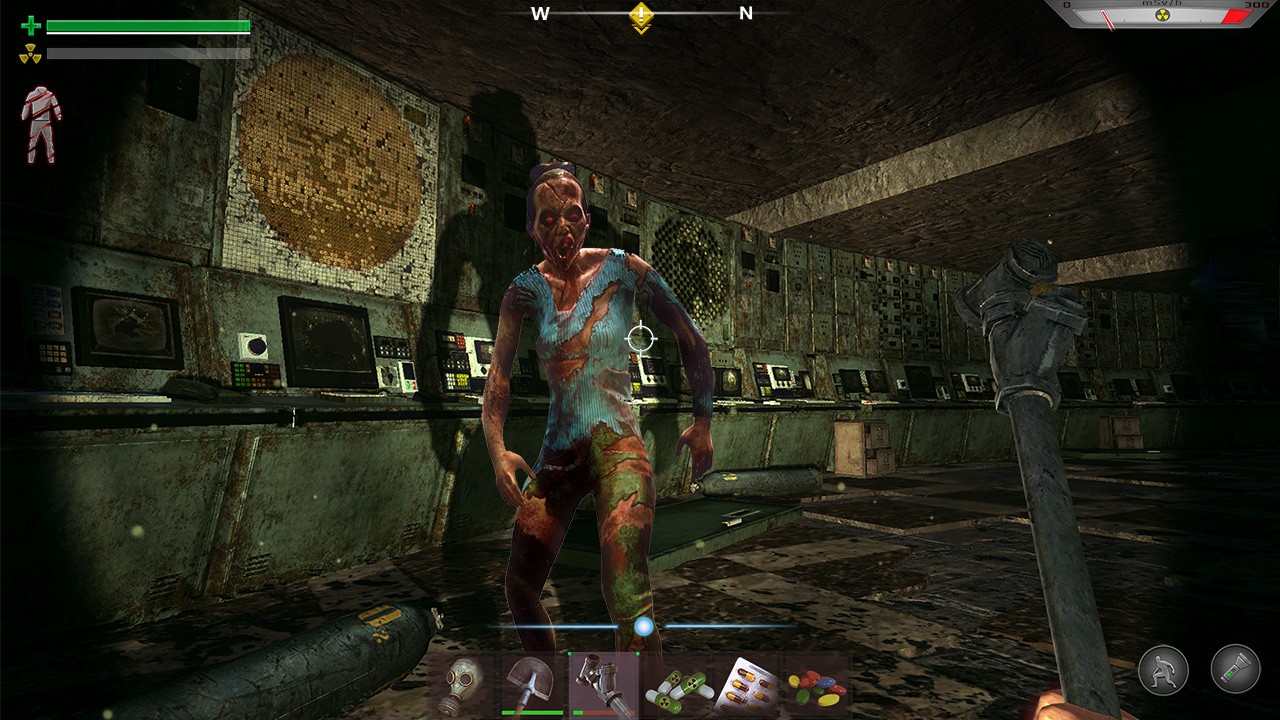 Escape from Chernobyl sounds like a delightful game doesn’t it? Or at least it did for me. I’m massively interested in what happened all those years ago, the history around the events of Chernobyl are both devastating and chilling. I won’t bore you with this history as the story will be longer than this actual review. But if you don’t know about what happened in Chernobyl you’re either too young to recall it or have been hiding under a rock and haven’t read up on the tragic events that took place.

Chernobyl was likely the biggest nuclear disaster of all time and there doesn’t appear to be many games surrounding it. So I was intrigued to pick this up on Nintendo Switch and see what it is all about. Developed and published by Atypical Games in 2018 firstly to the mobile gaming market, it is dubbed as a horror survival game. Apparently this is inspired from a previous title from the same team called Radiation City which was published in 2015. Sadly I have never played that game but I can understand the similarities.

Escape from Chernobyl is a first-person survival game that literally places you at the scene of the nuclear devastation aftermath. The objective laid out to you is literally in the title and that is to Escape from Chernobyl and also find out what has happened to your missing partner. Don’t think you’re in for an easy ride though as you’ll be looking for clues, scavenging for supplies, avoiding poisonous radiation and fighting infected zombies. Now I just wanted to stop this here and scratch my head for a second, I was looking at the screen with a blank expression wondering how zombies found their way into Chernobyl so let’s just roll with it for a moment. 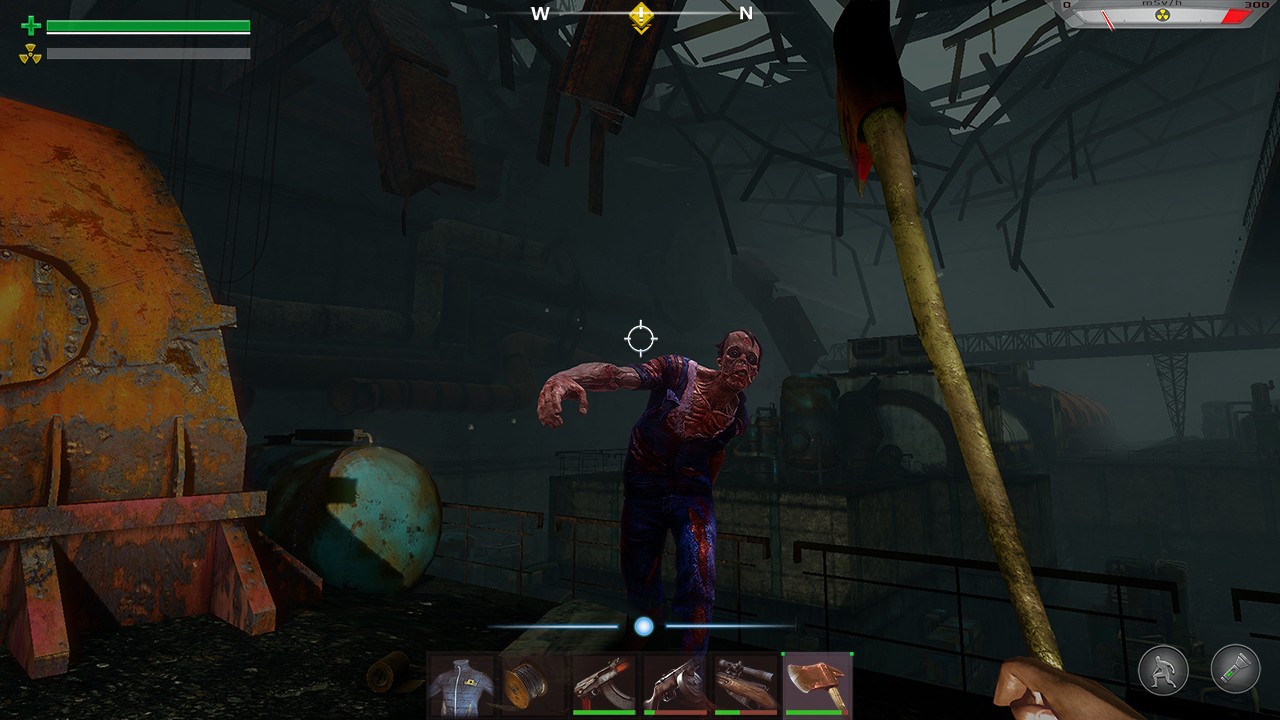 I was quite pleased when starting the playthrough that I didn’t have to worry about food and drink as these elements always put me off in survival games if the mechanics aren’t right. Also would you really want to be eating a mars bar with radiation juice doused on it? That would just be as ridiculous as zombies in a game about Chernobyl. Now I didn’t play Radiation Island or Radiation City which are the two previous games by Atypical Games but it seems they are really keen on all things radiation. The game sets you off on your first linear quest of attempting to escape from the power plant that you’re based in. Bear in mind that this title is shockingly dark to play, I attempted to play it on a moving train with interior lights and the sun gleaming through the window and spent about ten minutes tinkering with the settings to try and improve the visual quality but to no success.

Sadly this title throws you in at the deep end and you are required to figure out the control system and your movements early on. I found that almost immediately I was encountering zombies and you’ll have no choice but to challenge them head-on sometimes. They can come at you really quickly so you’ll need to learn how to melee if you don’t carry a weapon. Dealing with the zombies isn’t terrible and the mechanics work well enough but it can feel clunky and tedious at times. It is difficult to gauge your approach to attacking zombies and its hit and miss how many times you’ll need to attack to kill them off completely. The one good element of this was the sound effects seemed chilling enough to put you on your guard at the right moments.

Obviously in the wake of a nuclear aftermath you’re going to face some obstacles along the way. Frustratingly your character can get stuck on it quite often and I wasn’t sure if this was actually a feature of the game or it was just a horrendous amount of bugs within the game mechanics that made me want to turn it off instantly at this stage. Part of me though wanted to continue because of the setting and despite its annoyances I was enjoying what I was playing. These issues with getting stuck had to sometimes be resolved with purposefully dying or resetting the game to its last checkpoint, further reading into the game made me realise there is a feature within the menus to free yourself of being stuck. That has to be a first for any video game I have played in my lifetime. There isn’t much downside to dying out as you just start from where you left off but when it happens constantly and consistently it doesn’t fill you with hope to proceed. 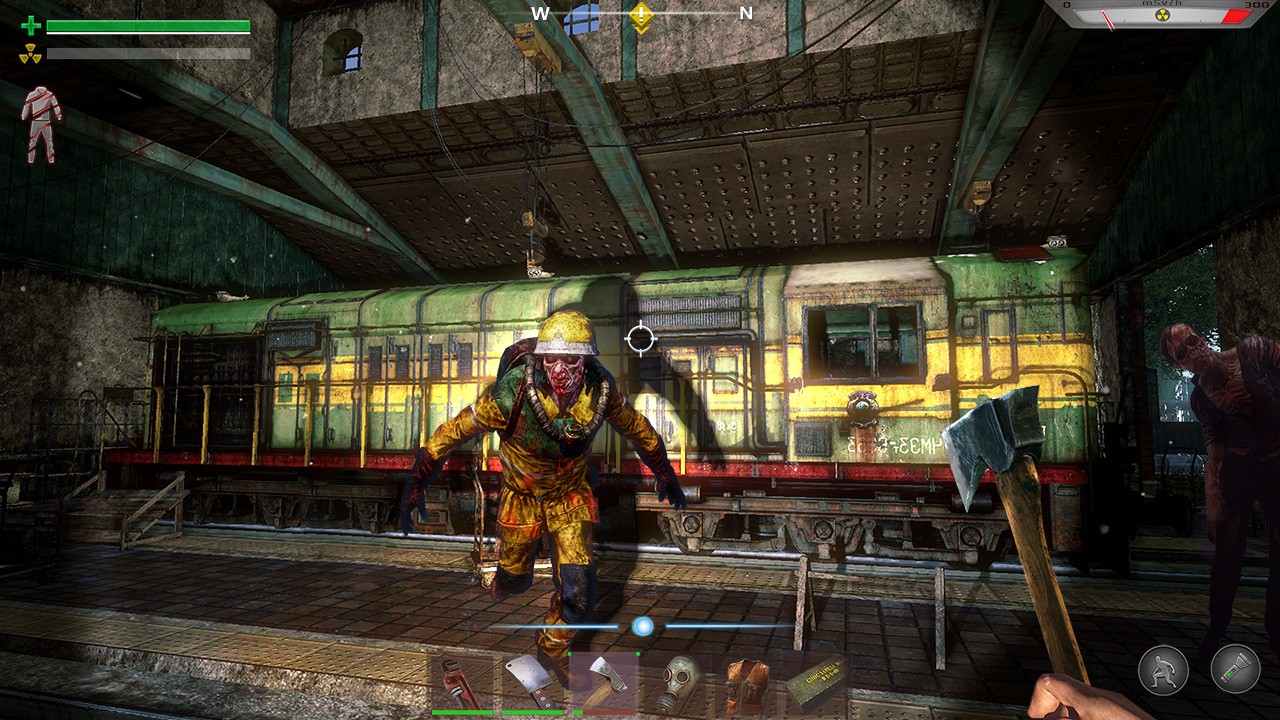 So I’ve talked enough about zombies, what about the radiation elements of the game then? There is a bar at the bottom of the screen that will gradually increase as the radiation gets stronger. When this becomes harmful it will start to deplete your health, I did enjoy using this tool to full effect and it makes you judge where you can and can’t go. There is some medicine that you can consume to reduce the effects of radiation but these are very scarce so use them wisely. There is some crafting elements to the game which will allow you to build medicine to heal you whilst you’re wounded so there is some blessing to the constant bother of zombies.

Overall Escape From Chernobyl is a game best suited to mobile devices but has been poorly implemented to the Nintendo Switch console. It is a sad shame because the title of the game alone grips you but its endless bugs and glitches just make it a mundane experience. With some real work and polish this game could have been a hidden gem but it truly is one to maybe pick up in the bargain bin and then forget you ever played it.

Escape From Chernobyl has an intriguing title for a game but it falls short and doesn’t live up to its name.