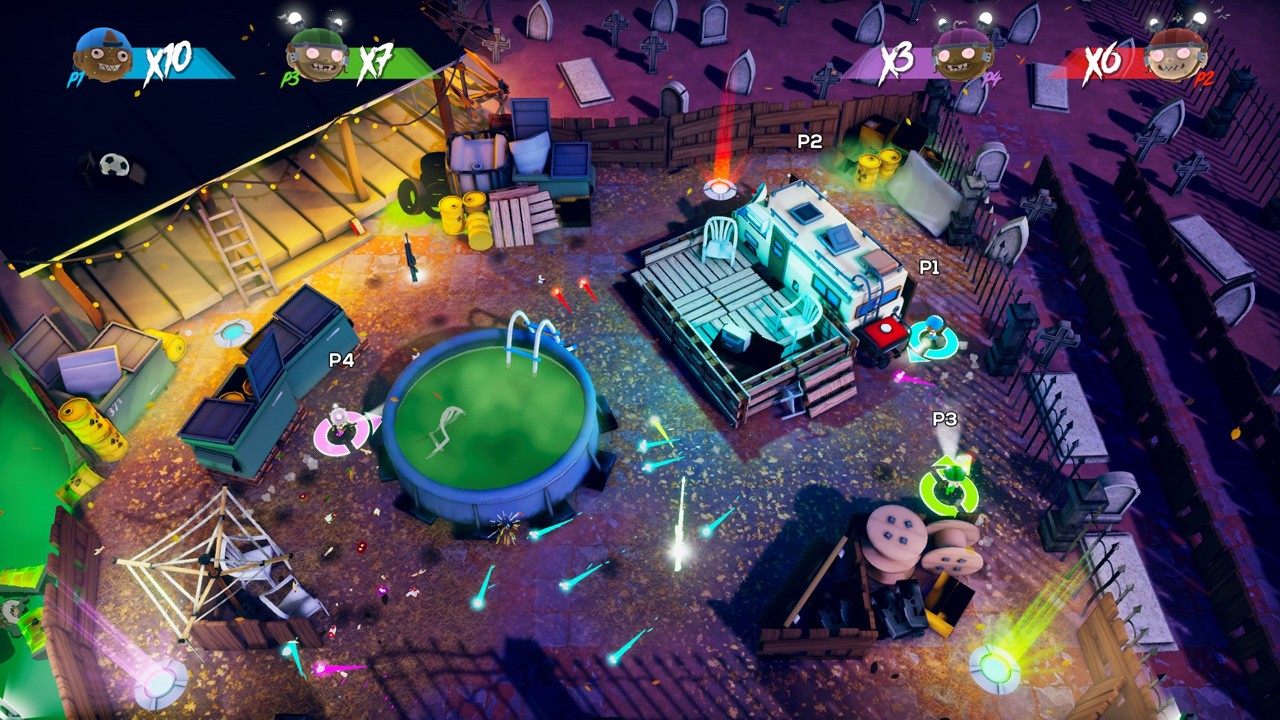 A game as crazy as it looks, Trailer Trashers is a multiplayer shooter with a dark sense of humour. It comes across like a strange mix of a Mario Party minigame and Gears of War as you make your enemies a gory puddle of mess. Sure you can turn off the gore but it can’t be denied you would be missing out on some of the strange charm of the game. On the outside, seems like a fun and simple game, but what is Trailer Trashers actually like?

Let’s start by looking at the gameplay which is simple by design. Anyone can pick up Trailer Trashers and play, particularly as it can be done with a single Joy Con. The buttons are responsive, if anything, aim can be a little blocky but nothing practice can’t fix. Although the aim taps into tactical elements hidden behind the simple exterior, as bullets bounce off walls and there are special guns that spawn with different firing patterns. Trailer Trashers is frustrating at first, due to the number of times you kill yourself by accident but once used to it, the gameplay becomes a lot more interesting. Beyond moving and shooting, there is the added choice of 3 abilities (dash, shield and invisibility) in the mix. All are simple yet effective, working well to spice up the gameplay with more tactics to be used. Safe to say, no two matches are ever the same. 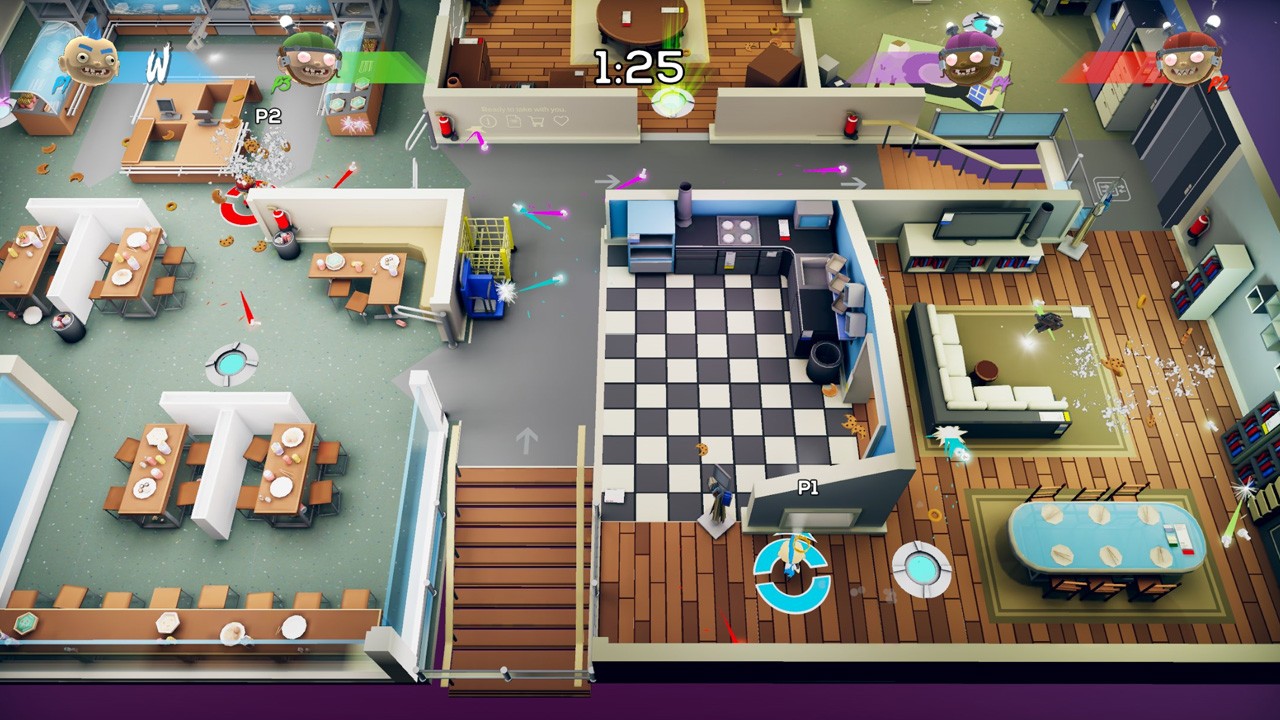 There are 4 gameplay modes for you to choose from which are Free For All, Team Death Match, Last One Standing (with a team variant), and Soccer. Most are pretty standard shooter modes and as you can imagine soccer is about putting a ball into the net. Although there is also Head Soccer that swaps the ball for enemies’ heads. Where it does seem fun, the physics of the ball can seem a little off and the head soccer can be confusing to tell the difference between the two teams heads. Not only that, the game crashes when there is a lot of heads on the field… Either way, when mates are round, Party Mode helps create random rounds of Deathmatch and Free-For All, allowing the fun to start straight away with no messing around swapping between modes. All modes are only offline, with no online play available.

Visually, despite the gross cartoon aesthetic, it is pretty standard. Where the characters look generic, like a weird morph of Overcooked avatars and Rabbids, the maps have fun little details and obstacles to keep gameplay interesting. The top down view works well for local multiplayer, but the characters are a bit too small; making it hard to see and keep track of where you are at times. This is particularly when you respawn, as it happens quickly at a random spawn location across the map. It can be frustrating after spending a few seconds finding yourself, only for someone already being there shooting. At least the more you play it, the more you get used to it, as it is very much a game that needs some practice. The visuals are matched with a metal soundtrack that compliments the fast pace action; a basic looping riff but the right energy. Yet it is drowned out by gunfire, splats and the odd double kill and kill spree announcements. Easily forgotten about, covering for the fact it is the one piece of music in the game. Arguably, it could do with a different track for the menu, but remembering it is a simple game makes it justified. 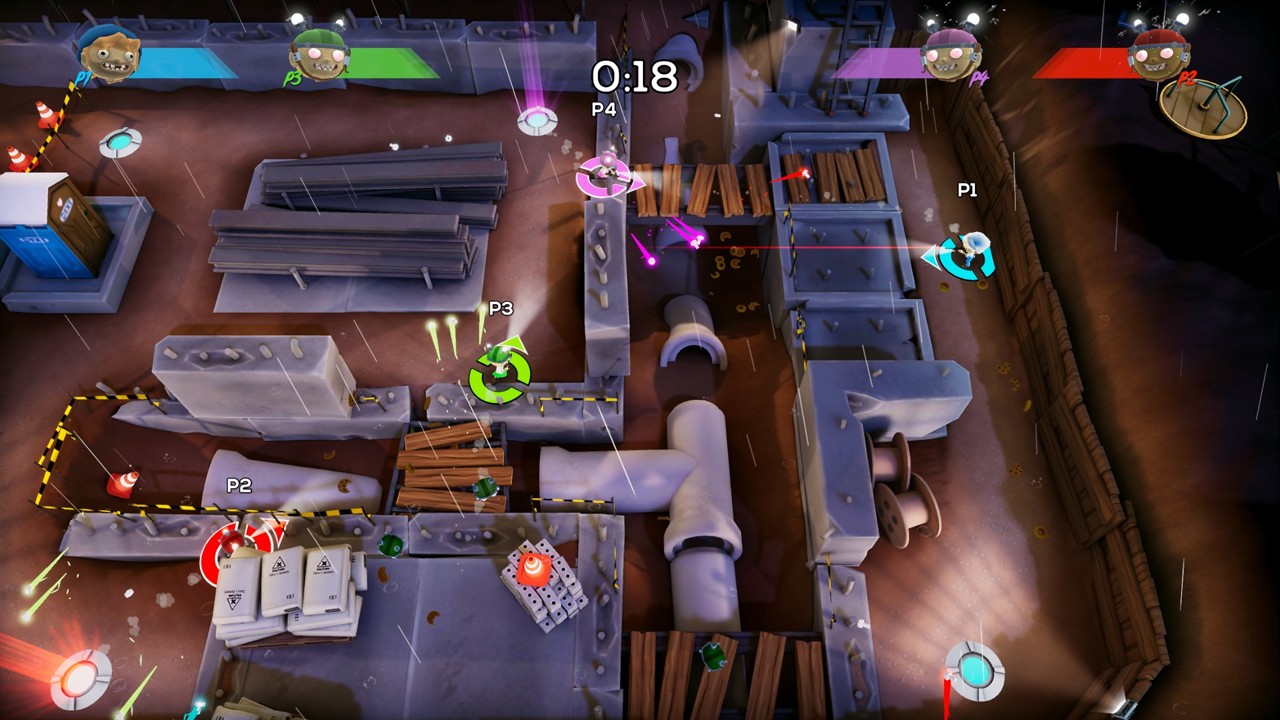 Performance wise, Trailer Trashers runs well as a whole, minus the previously mentioned too many heads problem. Sure loading screens can be slightly long, but the matches themselves run smoothly, so can be forgiven. If anything a quick tutorial mode or something to ease new players into it would be a welcome addition as you are thrusted straight into it without the ability to set the difficulty of the bots. At least the rapid respawn allows you bounce back quickly with no real consequence. Indeed, Trailer Trashers is a very simple game and with no characters, maps or anything to unlock, there isn’t much replayability if you are on your own. With the lack of online play, it is very much a game you only boot up once some friends are round.

Trailer Trashers is a fun local multiplayer game. With its simple design, allows anyone to be able to pick up and play. The chaotic nature will ensure it bring some fun to any social gathering, whilst not serious enough to cause any arguments. Where it is great with others, it’s not as fun alone making it very much a party only game.