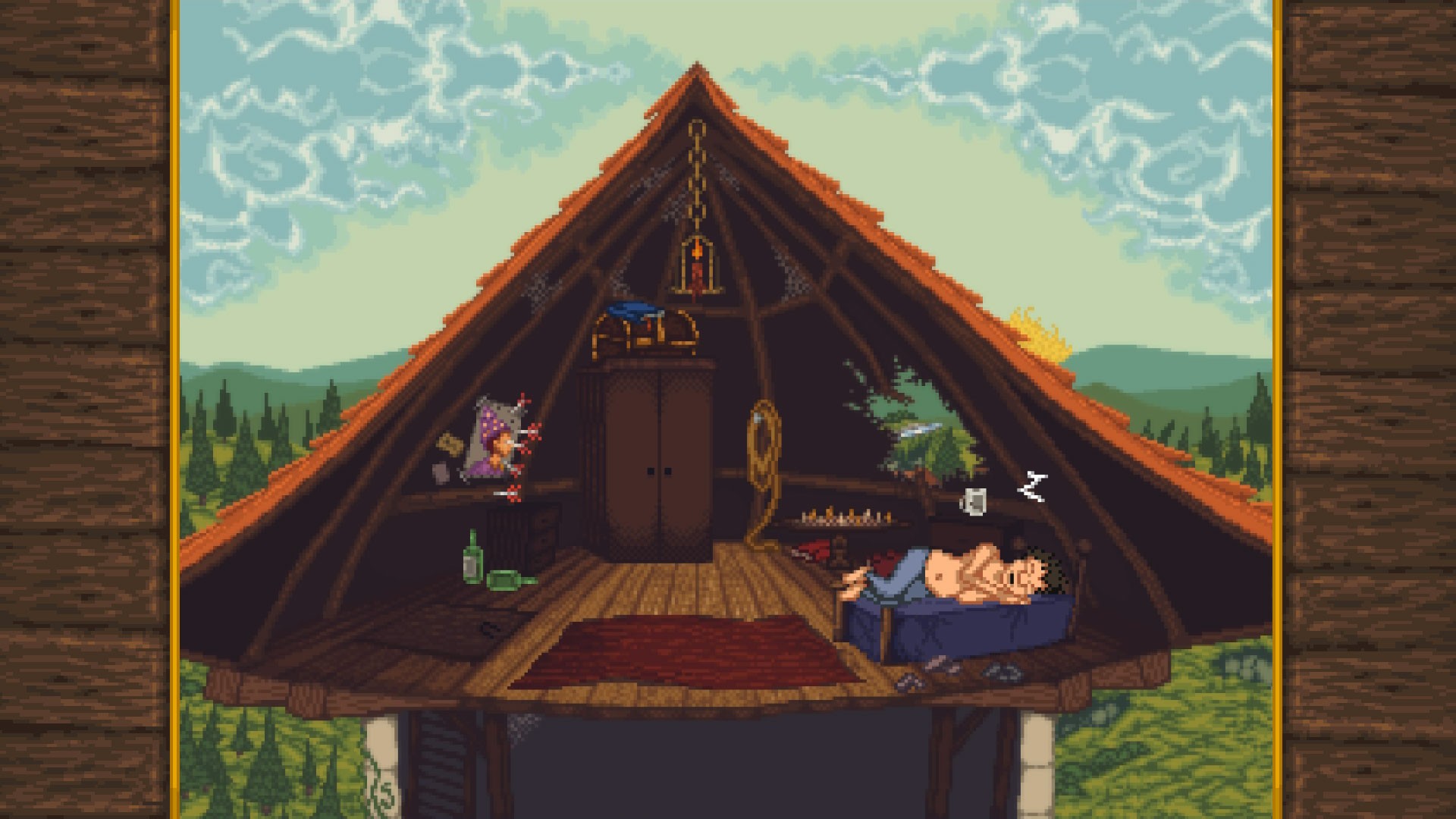 Tondbert can’t catch a break. After a long night of drinking–solo and on his birthday, might I add–and making a series of bad choices regarding his work and personal life, he’s awoken by another guard who tells him the King wants to see him. The only problem is his guard uniform is missing and he’s been locked in his room. Then, after finding his way out of said room, he’s stung by bees and cast out of the very castle he’s dedicated his life to protect. With his armour strewn around the town, Tondbert must bargain, swindle, and outright beg his way out of his current predicament–all while not being able to communicate because his face is so swollen from bee stings.

So begins a wacky journey to set things right.

Along the way, you’ll do things like buy “froot” from a fruit vendor, browse the wares at Sam’s Completely  Useless Trinkets, have a frog stand-in for a kiss you want no part of, collect a key from “the usual place,” and eventually round up every piece of your missing attire. But these paltry puzzles are just a warm-up. When you finally get a chance to talk to the King, whatever he had to say to you becomes utterly irrelevant because his daughter, the Princess, has gone missing. Unsure of how to handle a sobbing monarch, Tondbert does the only thing he can do: promise to brave the dangerous world beyond the castle walls and save the Princess. 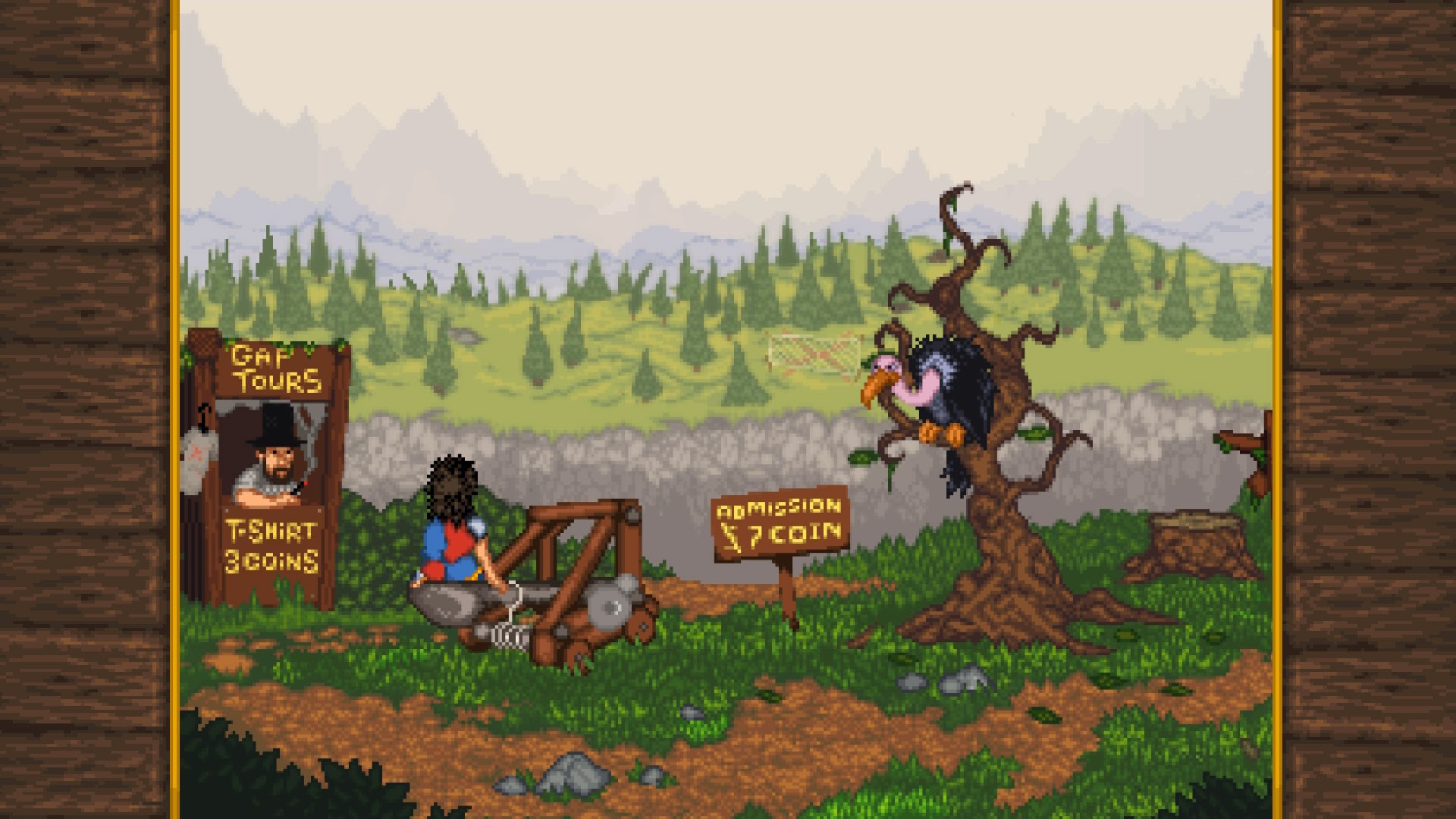 Guard Duty is a point and click game, meaning much of gameplay depends on examining, collecting, and using objects–all with commentary from your main character. This commentary not only serves as a geeky reference or an amusing remark, but also a contextual clue regarding what to do next. You can move Tondbert by aiming the cursor and pressing x or R2. If there’s an object he can interact with, he’ll automatically add it to his aptly named infinity pouch, activate it, comment on it–whatever the case may be. To access the current selection of items you have accrued, you can click on the pouch icon in the top right corner of the screen or simply tap square. To use items in your infinity pouch, you select the item with x and then select the item or person in the world to use it with. There’s no need to combine objects, an aspect that was oddly absent despite being a staple of the genre.  You can look at the infinity pouch’s contents using circle. The item you’ll most use is likely Tondbert’s to-do list. It will keep track of what tasks you’ve completed and what’s still left to be accomplished. If ever you can’t figure out what to do next, this will be the only hint system present.

Fortunately, there’s really no need for a hint system in Guard Duty. There are plenty of context clues found simply by backtracking or talking to NPCs and it you get stuck, taking another look at your surroundings may glean your solution.. The difficulty level was just right for a laid back playthrough, which was a lovely surprise having recently played point and click games that were obscure to a fault, but it may alienate anyone expecting the old school challenge. I personally never felt like I was just coasting through, nor did I want to tear my hair out at any point. 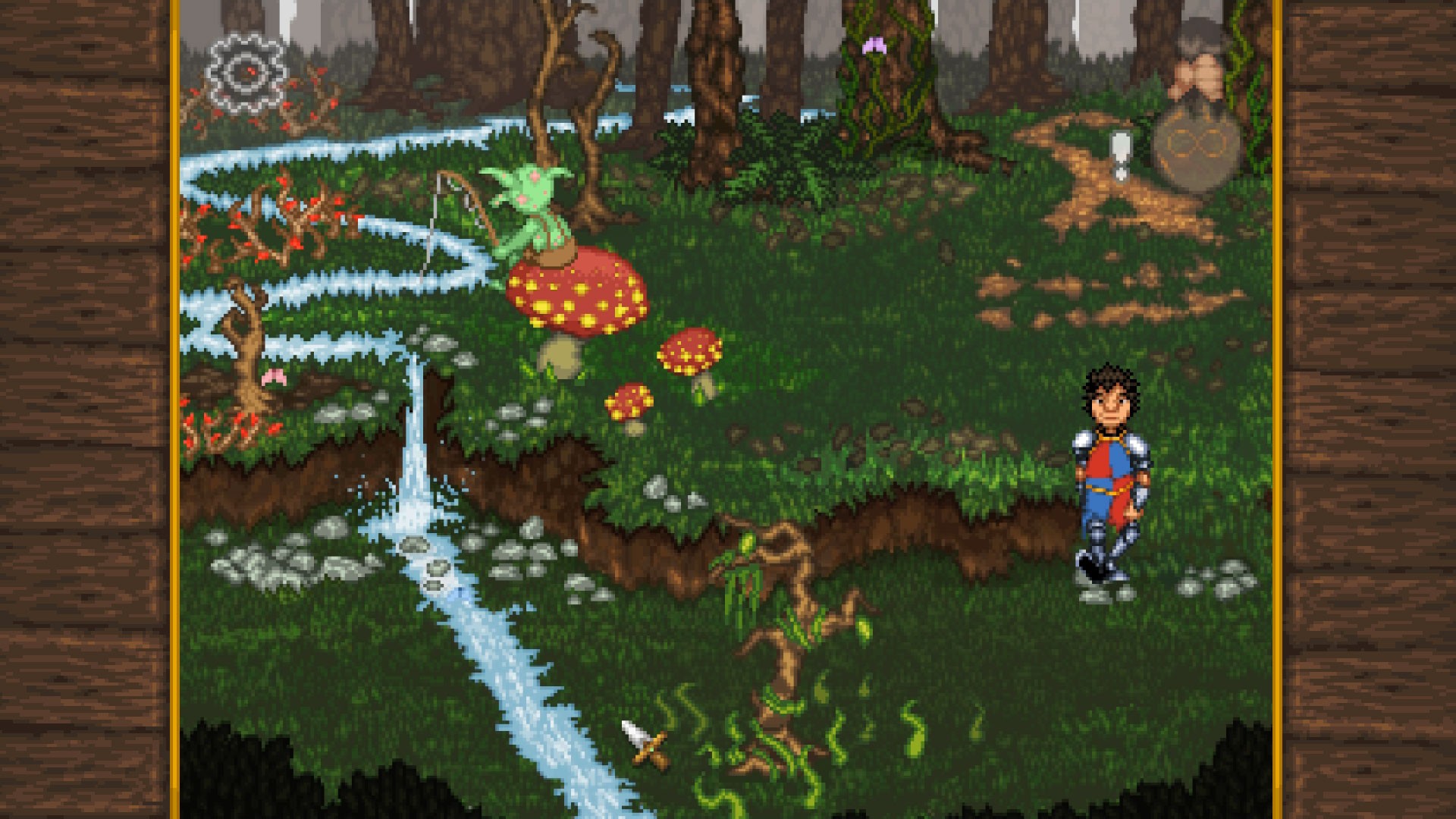 Guard Duty doesn’t take itself too seriously and that is made evident by the writing. At one point a guard stopped me because I couldn’t continue without possessing the DLC (Death Liability Contract) and another time an NPC remarked that it seemed kind of lazy that most characters only had one name. Guard Duty recognizes that it isn’t doing anything ground-breaking and a character even tells you that every princess is blond-haired, blue-eyed, and waiting on some hero to rescue them, but it certainly does a good job of at least making that age old journey an entertaining one.

Guard Duty looks like an old school adventure game with its blocky pixels and that may appeal to some more than others. Characters are fully voice acted, though some voices are shared, and that adds another layer of polish. The BGM is more modern than old school and it does a serviceable job of setting the atmosphere.

Guard Duty has an old school appearance and modern day conventions that combine together to create a point and click worth playing. It’s by no means perfect, but there’s plenty to like, including the characters and locations. Many of the puzzles can be solved simply by paying attention to your surroundings, but still result in a sense of satisfaction once you’ve solved them. If you’re looking for an old school dose of challenge, you may want to look elsewhere. Otherwise, Guard Duty can be completed in an evening if you’re dedicated, but it’s a fun way to spend those hours.

Guard Duty recognizes that it isn’t doing anything ground-breaking and a character even tells you that every princess is blond-haired, blue-eyed, and waiting on some hero to rescue them, but it certainly does a good job of at least making that age old journey an entertaining one.