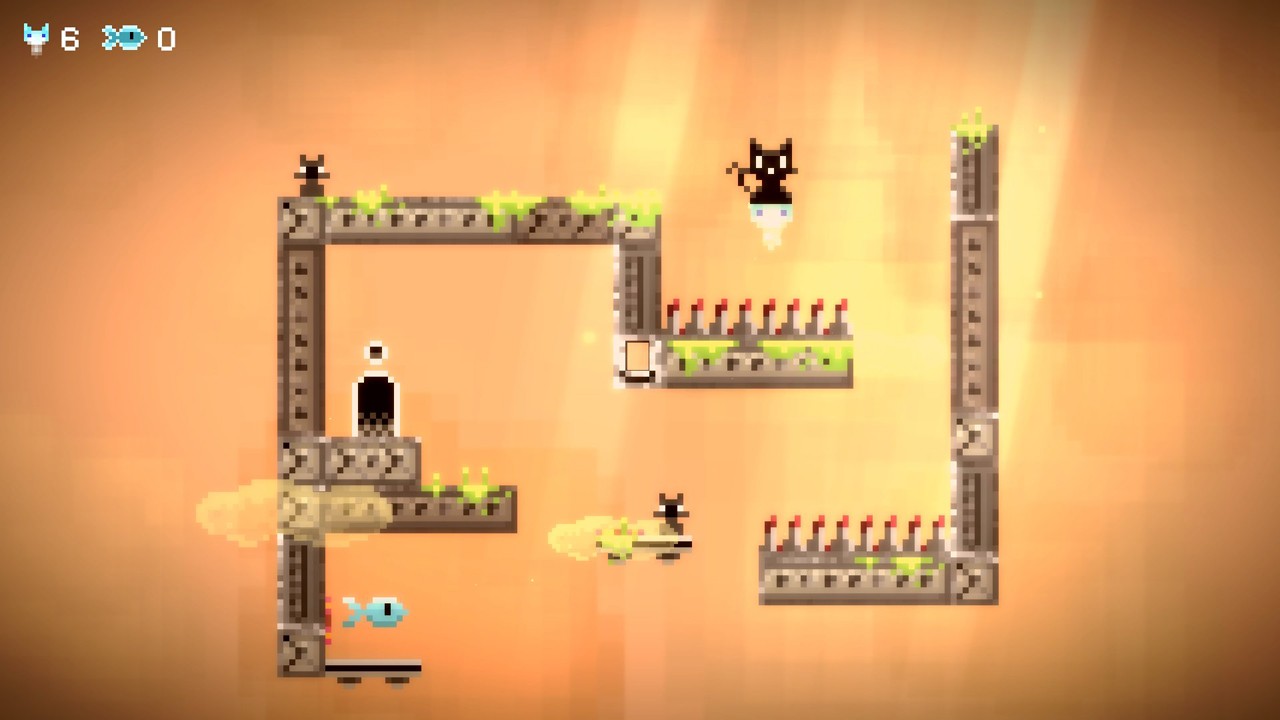 For those wanting an adorable game where you take control of a cat looking to escape heaven, then Purrs In Heaven ticks all the boxes. Though as time goes on, you start to notice elements that have been majorly overlooked, making it a clunky and unpleasant experience.

Purrs In Heaven is from Spanish indie developer Pixel Bones and published by EnjoyUp games, the first of their games to be made available on the Nintendo Switch. It’s a one man band developer that’s produced a handful of other games for the WiiU, PS Vita and PC in the past few years; a lot of determination has been put in to make the end product, but it still needs plenty of refinement nonetheless.

You’re in control of a black tabby named Lanna whose been sent to kitty heaven and trying to get back to the land of the living after you were run over by a car. After a conversation with a God named Yama, you have to gather 3 pieces of your soul by completing puzzles in a standard platformer setting.

In total there are 30 levels to complete, sprinkled with rhythm-based mini games and bonus challenges you unlock throughout the game. At first you’re getting used to the controls and eases you in nicely, even with the tutorial cards being almost useless and you end up having to figure it out for yourself. Then it begins to get harder very quickly, to the point where some levels almost feel impossible to complete. At least the levels are sweet to look at as you repeatedly fall to your “death”. 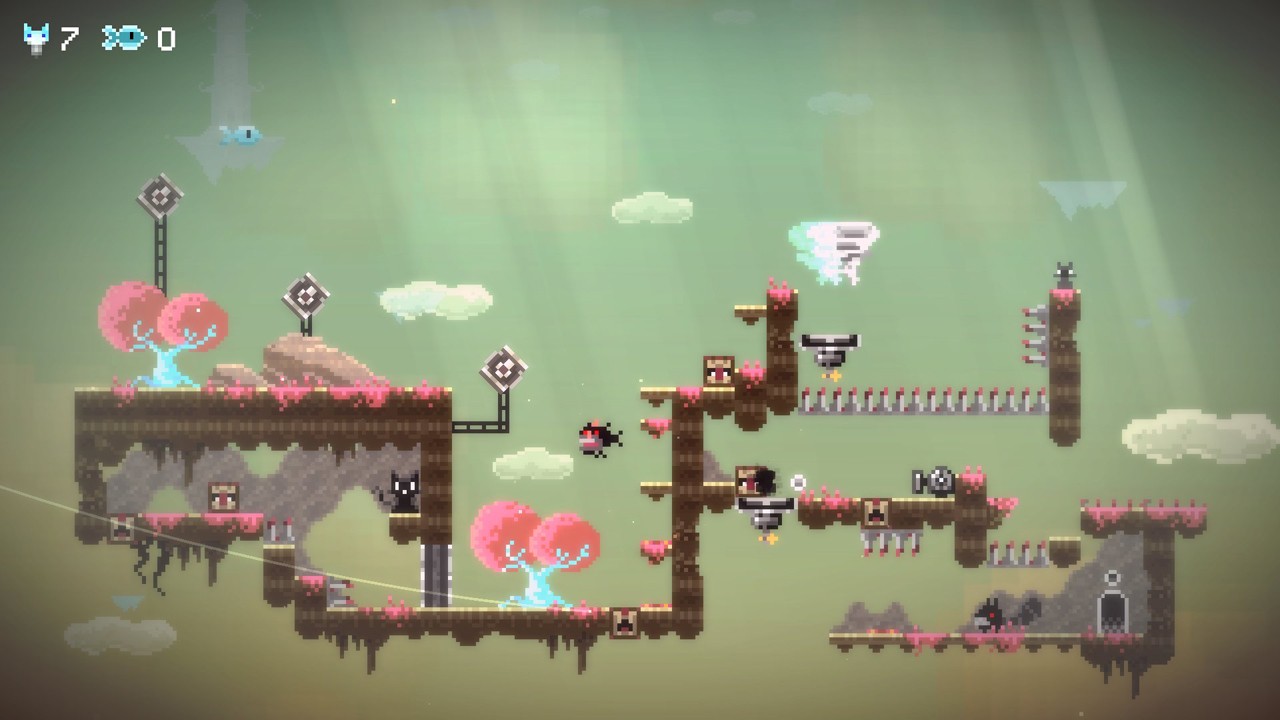 What makes Purrs In Heaven different is that you have the ability to duplicate bodies of yourself to reach up to higher levels. Once you reach beacons, glowing spires, on the map, you can recharge the number of cat clones you can use – you can only use 7 “clones” of yourself at one time. There are also collectables, fish and coins that can be used in exchange for perks at certain points during the game.

Along with dodging enemies, reaching platforms and a sprinkling of mini games, as with every standard platformer, there isn’t much else that makes it as unique. The art style is admittedly adorable, with a sweet plot line that’s easy to follow and has similar rings to other 2D art platformers like Shovel Knight and Celeste, though it couldn’t be said that Purrs In Heaven is of the same calibre.

Most platformers allow you to bring a sense of initiative and strategy to get yourself to the end goal, but with this game there is a lot of clunky moves you have to pull off to get further. Certain parts of the game appear to be broken which hinders your progress even further as you try to navigate. There is one noticeable bug that’s of some help to you though – every time you “die”, the number of clones you can make of yourself resets. There’s no “game over” in this game at all actually, so you could spend all day on the game if you really wanted to with no fear of losing anything in the process.

The mini games that break up the platformer levels are the most frustrating parts of each section. The majority of them are rhythm-based i.e. press the button in time with the beat, though they too are broken. These parts of the game soon became the bane of my life as I was working out when my button presses would actually sync with the in-game beat: roughly about a 2 second delay. After your 56th attempt of trying to crack a mini game that should be tied to your button press, you’re bound to get bored rather quickly. 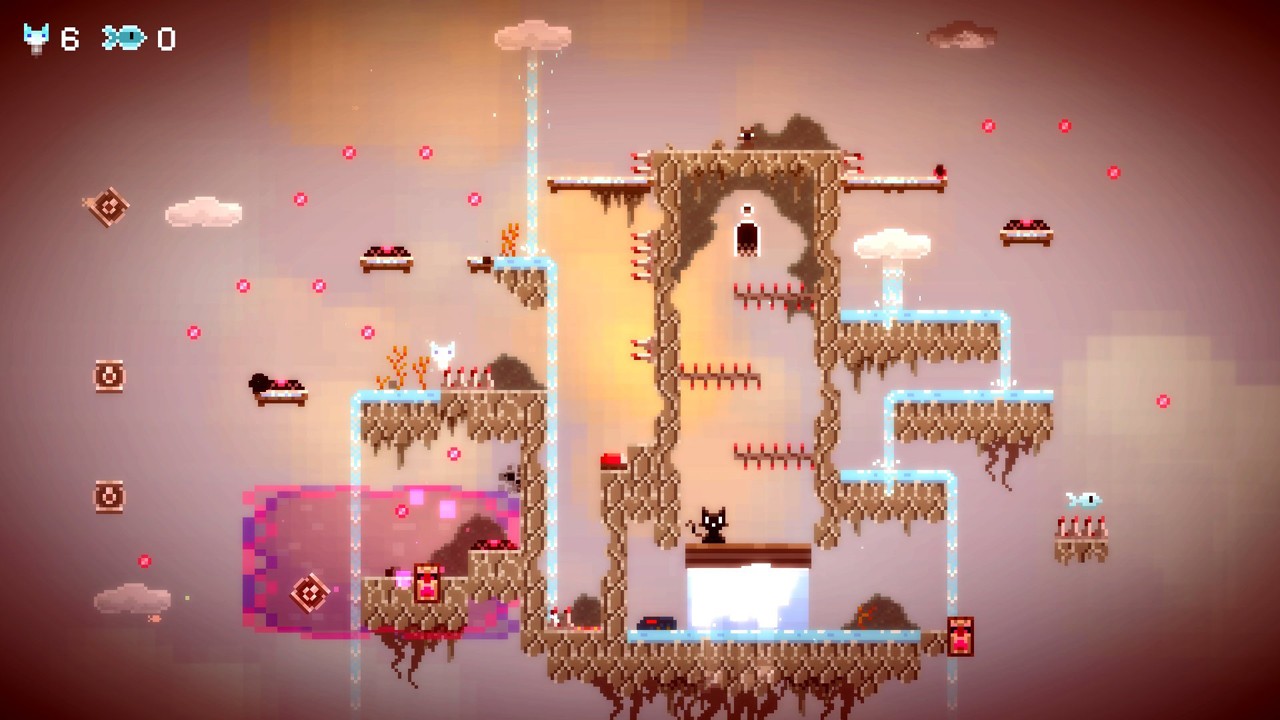 Unfortunately, it’s not just the mini games that are broken, certain parts of the game are clearly broken or a struggle to complete. Some elements can only be completed if you can time the jumps and buttons up correctly. There is a distinction here in that, granted, a game should naturally become harder over time and a challenge is welcome, but not when the game can’t even be completed due to elements not properly optimised for.

There’s around 3 hours worth of gameplay if you manage to work your way through the broken elements of the game. Unfortunately, the satisfied feeling you get from finishing a game has waned by the time you reach the end. Most platformers bring a sense of joy and strategy and the nice challenge it brings, which Purrs In Heaven has sadly failed to bring. Bringing only frustration in amongst all the broken parts to the game, on top of how difficult it ends up being, it’s a shame that the game fails to live up to its expectations.

What appears to be an adorable game on the outside comes a clunky, confusing game that only brings frustration.