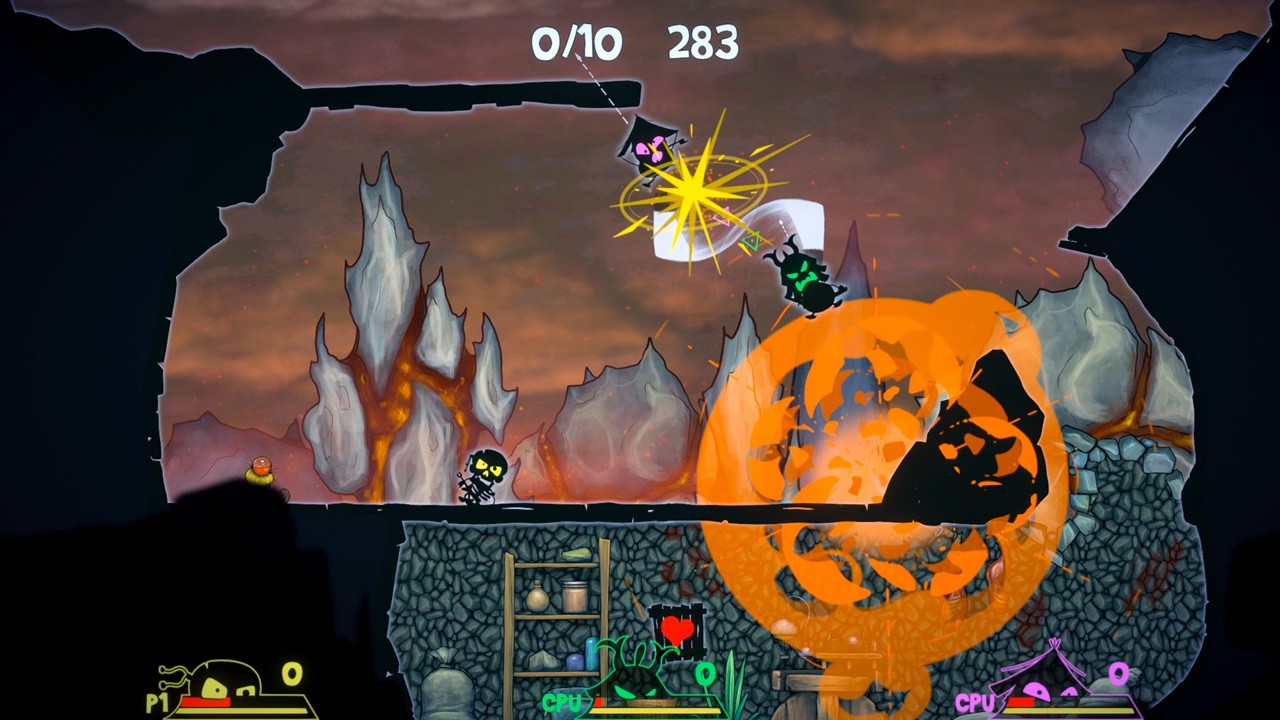 The world is filled with 2D action and platforming games. While that may cause fatigue for some, it just means we need to be more diligent in uncovering the ones that are worth our time. With that said, if you’re in need of a simple yet satisfying experience for quick play sessions, you can’t go too wrong Bouncy Bob 2. With fairly consistent gameplay, varied difficulty options, and diverse game modes, Bouncy Bob 2 could be a decent changeup in your playing routine.

From a visual standpoint, the game is quite straightforward. Bouncy Bob and his enemies are exaggerated, goofy looking 2D fighters. As combat goes on and health depletes, characters cartoonishly dismember before quickly emerging back into the fight. There are also a collection of  power-ups and ranged weapons available around a given area, each one is easy to distinguish and recognize in the heat of battle. While the overall style is simplistic, the environments tend to be an aesthetic shining point. Battlegrounds range from old cemeteries to volcanoes and much more in between. It’s no graphical marvel, but the game’s simple presentation ensures that it doesn’t distract from the quick and high-flying combat found in Bouncy Bob 2. 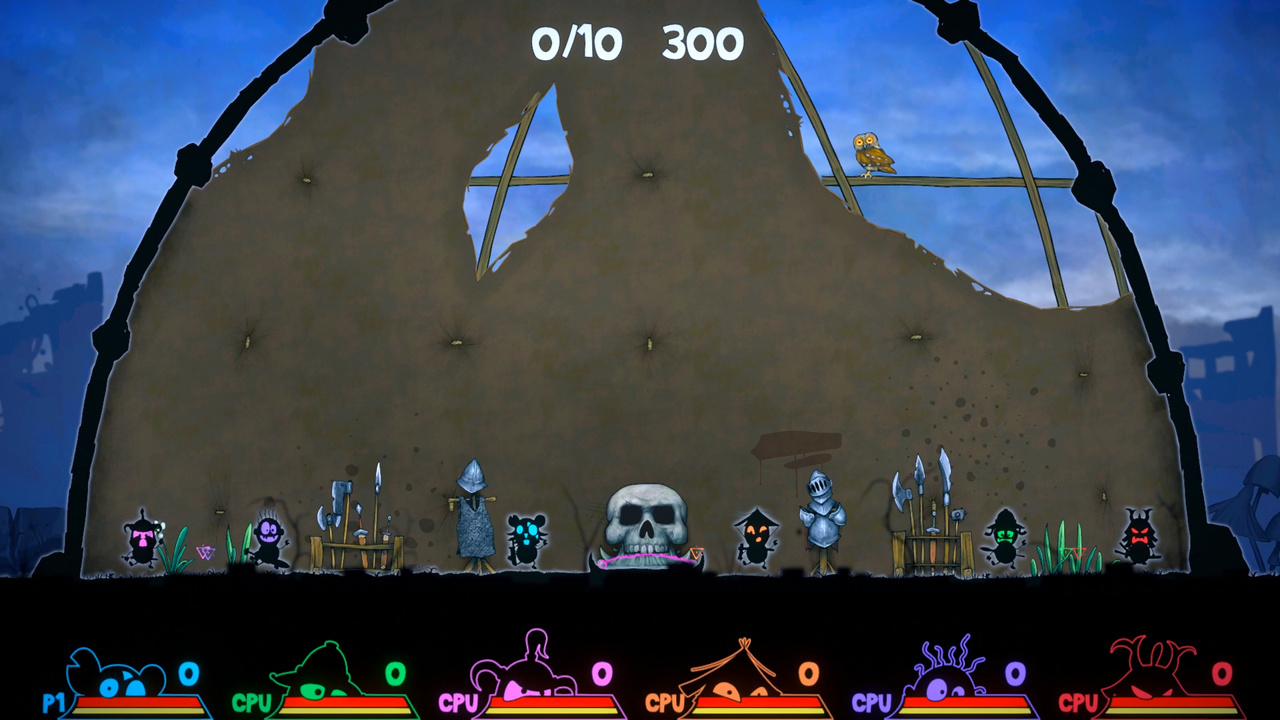 Which brings me to the gameplay itself. Bouncy Bob and all other characters act on a sense of specific timing. When positioned on the ground, every character perpetually tilts left and right, regardless of player input. It’s up to you to align your jump according to where your character is tilting in the moment. This makes for some interesting movements, whether you’re dodging an incoming enemy swinging their weapon, or launching yourself towards a killing blow on a foe. I found some of the most satisfying moments in Bouncy Bob 2 came from these spontaneous clashes in mid-air. Admittedly, melee bouts don’t rely too much on skill, instead relying on spam-like behaviour. With how rigid the close-up combat is, it becomes practically obsolete when attempting the highest difficulty level in the game. Instead, you’re pretty much forced to depend on the various ranged weapons scattered throughout a given stage. I found that my attempts at slicing and dicing my opponents on highest difficulty were futile, regardless of any advantageous angle I may have had. While I greatly appreciate the genuine challenge Bouncy Bob 2’s highest difficulty presents, I also became a little puzzled by how battles lost some dynamics.

There are a nice selection of gameplay modes in Bouncy Bob 2. The primary one is called Tower, where players can select an environmental theme, choose from one of three difficulty levels, and begin a series of brawls amongst a group of respawning enemies or the occasional one-on-one showdown. The goal is to be the first to a certain amount of kills before your opponents reach it, allowing you to progress to the next stage. It’s a tried-and-true format made somewhat refreshing by Bouncy Bob’s unique movement style and each stage’s tendency to incorporate verticality-driven design. 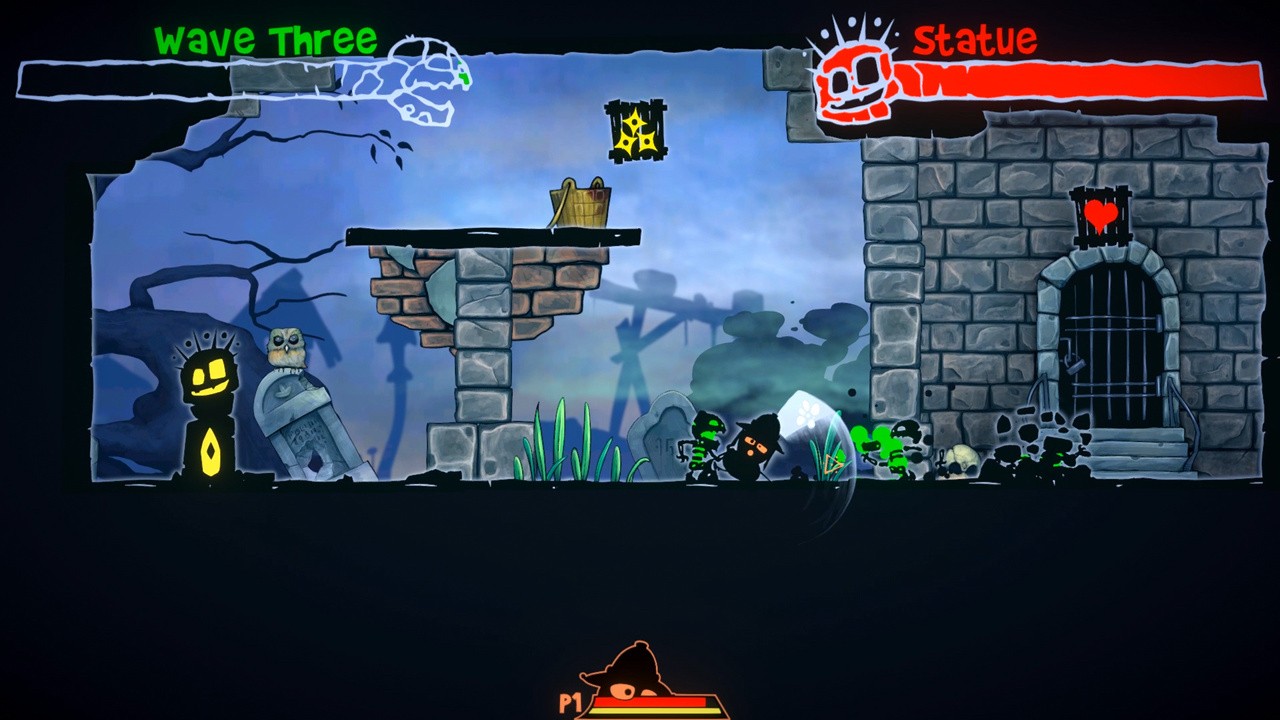 Then we get to the Arena and Swarm modes. Arena is focused on PVP gameplay, where up to four players can fight to the death. You can also play this mode solo, setting up three other computers to fight against. I find that this is where Bouncy Bob 2 proves itself to be stronger as a multiplayer experience. On the other hand, Swarm mode is you against the world. A staple of many action games, enemies come in waves of increasing volume and difficulty. Survive for as long as you can and defeat as many enemies as the game can throw at you. Pretty straightforward, but it’s frankly one of the more underwhelming components of Bouncy Bob 2.

There are also two oddball game modes that present fun concepts, but  rather shallow when it’s said and done. Volleyball comes to mind first; it’s just you against one other bouncy character across a few sets. This mode is a great idea on paper considering the jumping mechanics in Bouncy Bob 2. However, in practice, points are more often scored as a result of you and your opponent’s mistakes, rather than a genuine gap in skill from player-to-player. Because of this, it becomes very predictable when you or your enemy is about to score a point based on tough angles or extremely long bounces. Finally, there’s Blender mode. You’re placed in the throws of a hectic food blender, where a wide assortment of fruits shoot across the screen. It’s up to you to jump away and slash as many as you can in succession, almost like an even wackier version of the hit mobile title, Fruit Ninja. Like some of the aforementioned styles of play, there isn’t anything inherently wrong with Blender mode. It’s just worth mentioning that, again, very short play sessions will be more than enough to get the point across. Should be looking to break you or a friend’s high score, you might find reason to stick with Blender mode as well as Bouncy Bob 2’s other offerings a bit longer.

Ultimately, Bouncy Bob 2 is certainly not a bad experience, but there isn’t that much to delve into. On the plus side, the game is made much more enjoyable when taking it on with a friend in couch co-op, especially if you’re sticking to Arena mode.