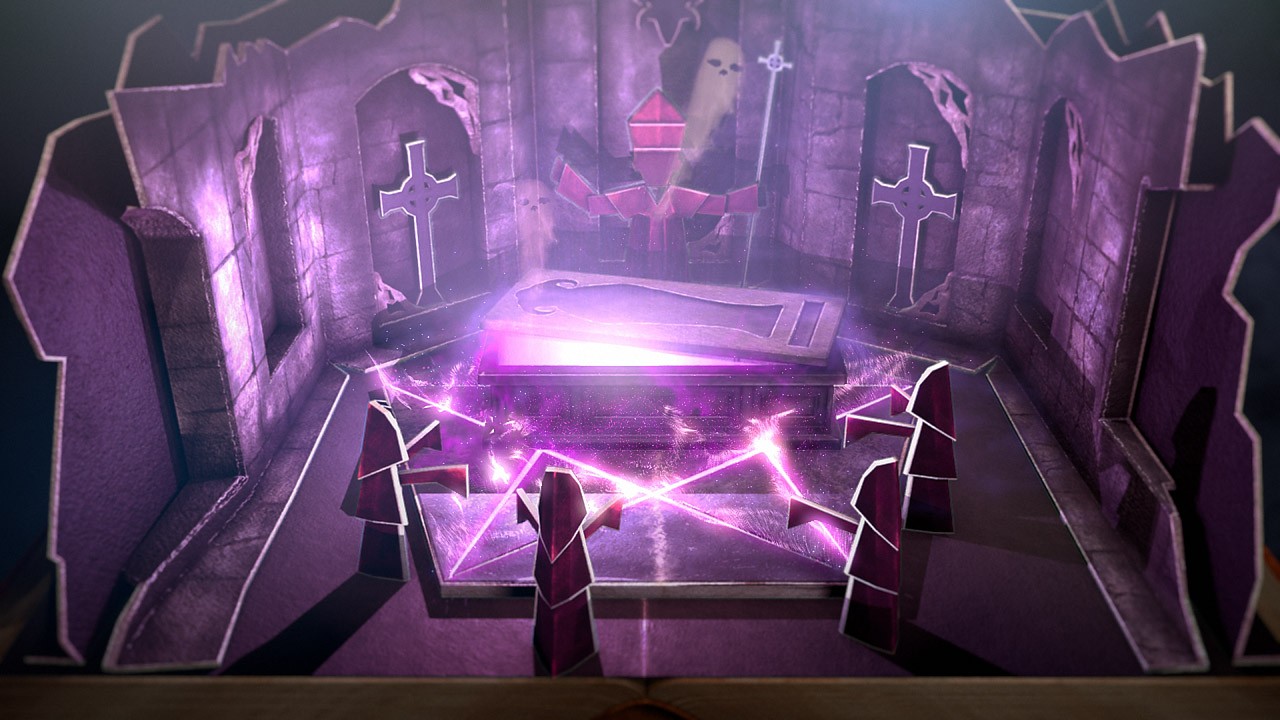 If there’s one thing that’s a great distraction right now, it’s a game with a serious time investment. While some people can easily rally behind a massive visual novel with multiple endings, a nonstop shooting arcade on an alien planet or endlessly landscaping their adorable islands, there’s another facet to be considered: the dungeon crawl. For those of us who used to do PC gaming back in the mid to late 90s, the name Diablo will conjure up images and memories of long nights deep-diving for loot, rapid clicking to massacre demons and rapidly pounding potions while slinging spells. Oh, and the faithful night where I wore a staff as a hat because I hacked my character, but that’s a different story. Hack and slash dungeoneering has always been enjoyable, and Think Trunk has done a bang up job in creating a replayable, procedural and ultimately unique ride with their deck-building hybrid, Book of Demons.

There’s a delightful little backdrop to Book of Demons that should be as familiar as a ham sandwich to people who’ve been on this sort of adventure before. You’re an adventurer of some renown class or name (which you can gradually unlock more classes), and you’re visiting a village full of quaint characters. The village is mostly unremarkable except for the Hellmouth that’s opened up inside their Old Cathedral, and there’s definitely an Unspeakable Evil residing at the very bottom, which is weird because the Cathedral used to have one basement and now it has about fifty. If you could be a dear and go on in, kill all the minor entities that have taken up residence and, eventually, slay the Ultimate Demon, that would be super! The villagers don’t have a lot in terms of equipment or helpful items, but they are rife with gossip and the ability to help you out if you bring them things from within the Old Cathedral. Namely, cards. 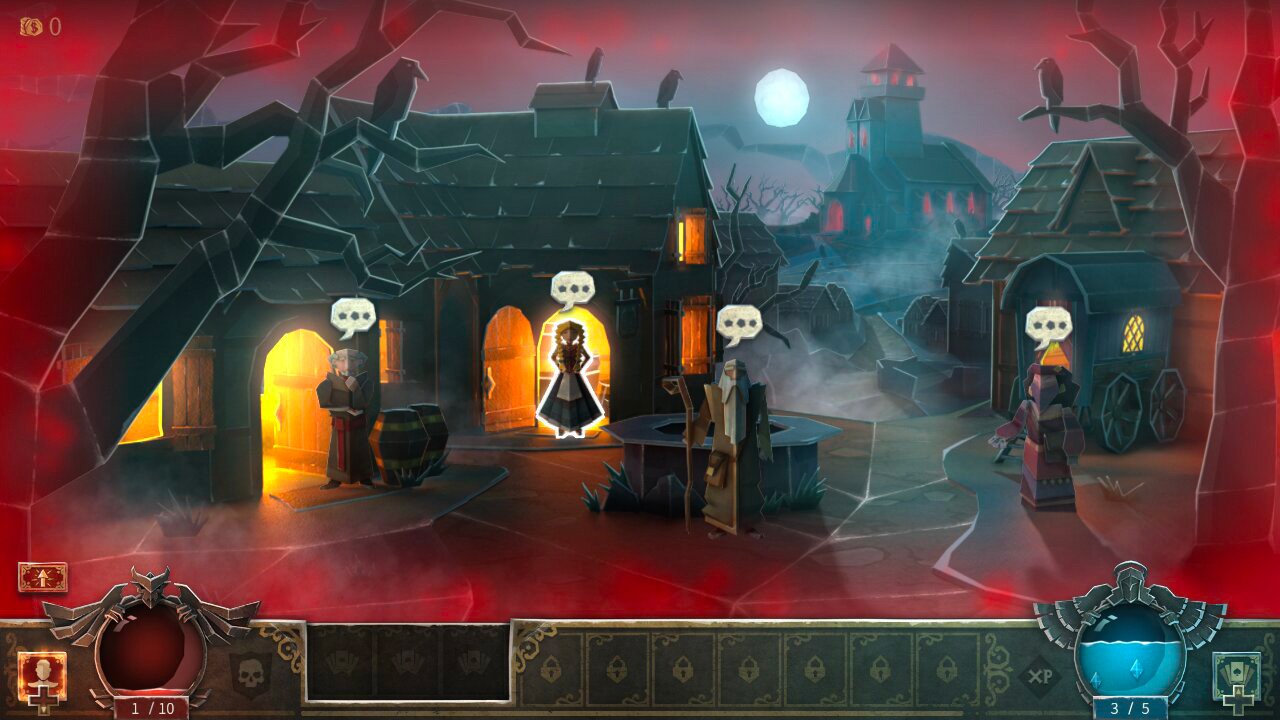 I realize that there’s been a lot of games recently that use the deck building option to make their title stand out, but I think it’s a smart approach. After all, we went through several iterations of deck building games that got people positively hooked, from Magic and Pokemon to Yuigoh and, most recently, Hearthstone. Book of Demons understands that, while people who are less familiar with the genre might not latch onto wearing armor and different styles of weapons, they’ll certainly understand the importance of deck limitations and balancing the cards you’re allowed to use. Plus, it makes for a cleaner inventory that’s easier to sort through and visualize when you’re trying to figure out what you can and cannot pack. You can’t wear greaves because your platemail is too heavy, well what the hell? I’ve got legs and they’re totally uncovered! But explain that your equipment pool has a limit of twelve points and the greaves are worth three, and suddenly it’s all crystal clear. This might sound Greek if you’ve got no history with either of these concepts, but please trust me that it’s something equivocal that my friends who enjoy Hearthstone would totally get on board with.

Additionally, the deck building idea fits in perfectly with Book of Demon’s second biggest draw, which is the art style and aesthetic. Imagine Paper Mario had to do an exorcism. That’s where we are. Each and every character is a two dimensional figure that has to be moved around a grid-like dungeon that was constructed by a particularly fiendish and clever dungeon master, and you never know when a turned corner will result in being attacked by skeletons, gargoyles, toxic beasts or any number of similarly paperlike beings. The animation matches as such, with spells and elemental effects hitting with spectacular explosions and color array, while the NPCs and the player alike jump and bounce along like you were carefully counting out spaces on a Monopoly board. It’s a wonderful juxtaposition, and it honestly never gets old. Frankly, the solid artwork combined with the old school concept really helps to invoke those ideas of well crafted Dungeons and Dragons sessions that I remember having years ago, and that’s saying something. Not to mention that these paper dungeons help to build a better connection with the procedural aspect. As you clear each level, you’ll be able to adjust the difficulty to make the next area larger or smaller, resulting in more enemies and traps but also more loot (if you choose to make it harder). This is where I can easily see a mischievous DM frantically sketching out an additional floor on grid paper to try and “get back” at a party who handled the last dungeon with ease and wants to bring a real challenge for the next session.

As for the more game-specific mechanics of Book of Demons, there’s somewhat of a hit and a miss happening within. Your character will auto attack by default, which is good when you see how many balls you have to juggle while playing. The auto targeting is something you need to sort of get used to, particularly when you get beset by enemies from all sides. Toggling between monsters isn’t really a thing, so you need to then get comfortable with the active spell pool, which is, surprise, represented by cards. I wasn’t a huge fan of needing to choose between quaffing healing potions and casting spells because I often wanted to do both at the same time, and my lizard brain remembers smashing multiple keys on the keyboard in order to handle them equally. Then again, the forgiveness factor with being able to find heals and even pick up the hearts that you drop to refuel yourself made things easier. Additionally, the auto attack left my “mouse cursor” (the right control stick) free to smash pots and activate other items around the room, which was definitely to my advantage. I loved the idea of my character lackadaisically smashing pots and opening crypts while also fighting monsters in front of me. Oh, and I definitely liked the pressure put on the B button. B is the universal key to trying to flood poison from your system, knocking down the shield that some enemies carry (can’t damage them with the shield up!) or interrupting the spell being cast by the lich mini bosses you encounter, plus other functions. Poor B got more use in this game than anything else because I was pretty terrible at maintaining my health. 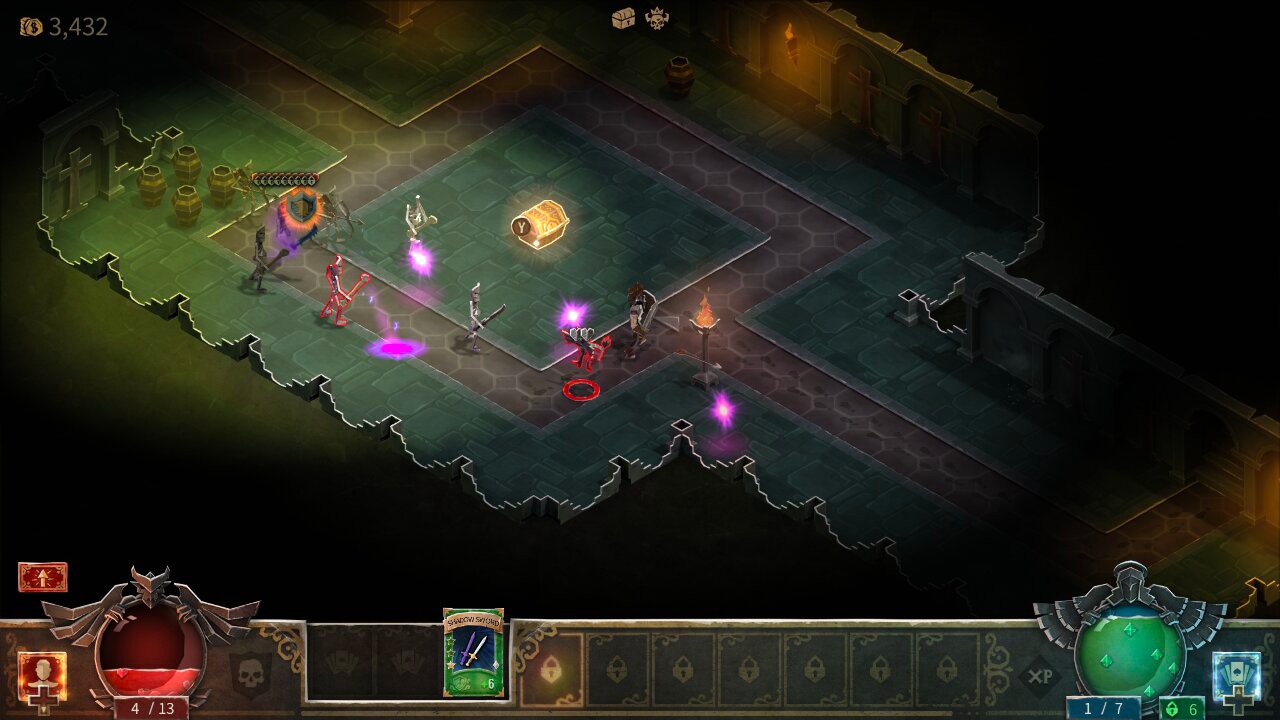 Hanging out in the village between dungeon runs was also a high point of Book of Demons. Sure, this is where you go to add more active card slots, upgrade cards if you find the right runes in the dungeon and get rewards from loot you find, but it’s also where the atmospheric tone really shines. You’ve got the dusky light, the endless stream of gossip, and the characters dropping soundbites that brought me right back to my Diablo days. I don’t think it’s any coincidence that the Sage greets you in a manner that felt very familiar; I’m shocked he didn’t ask me to “stay a while, and listen.” It brought back some great nostalgia, but it was also the spot where the console port showed a bit of its jankiness. I think it was easier to have all the different menus for character upgrade and card pool on the PC, and the port tries to have everything mapped to different buttons for quicker access. However, I wish there had been options for touchscreen: I sometimes got a little frazzled trying to get everywhere with just the left control stick, and forgetting that the directional buttons actually opened other tabs instead of assisting with movement. Still, it wasn’t horrible, just a bit different than I expected.

Book of Demons does an important and essential job by crafting a game that’s roguelite without actually showing how randomized it is. Other than the loading screen that shows you it’s crafting things together, you’d never know that the dungeons weren’t pre-fabricated and planned with care. Thing Trunk did a wonderful job in keeping the nuts and bolts behind the scenes and just delivering a polished and highly engaging experience that keeps you diving deeper and deeper to see what you can unearth. The music is foreboding and subtle, the soundbites are short and funny (Hello darkness, my old friend), the gameplay is wonderfully addicting and I’m able to start my second run with a different character, saving the endgame grinding for another day. In short, it’s a single player approach to dungeon crawling with charm, heart and originality, and it’s frankly worth every moment. I’ve had this game on my Steam wishlist for the longest time, and now my dreams come true: I’ve got it on the go, and it plays wonderfully.

Book of Demons takes everything I love about hack and slash dungeon crawling and flattens it for easy packing and anywhere demon hunting.