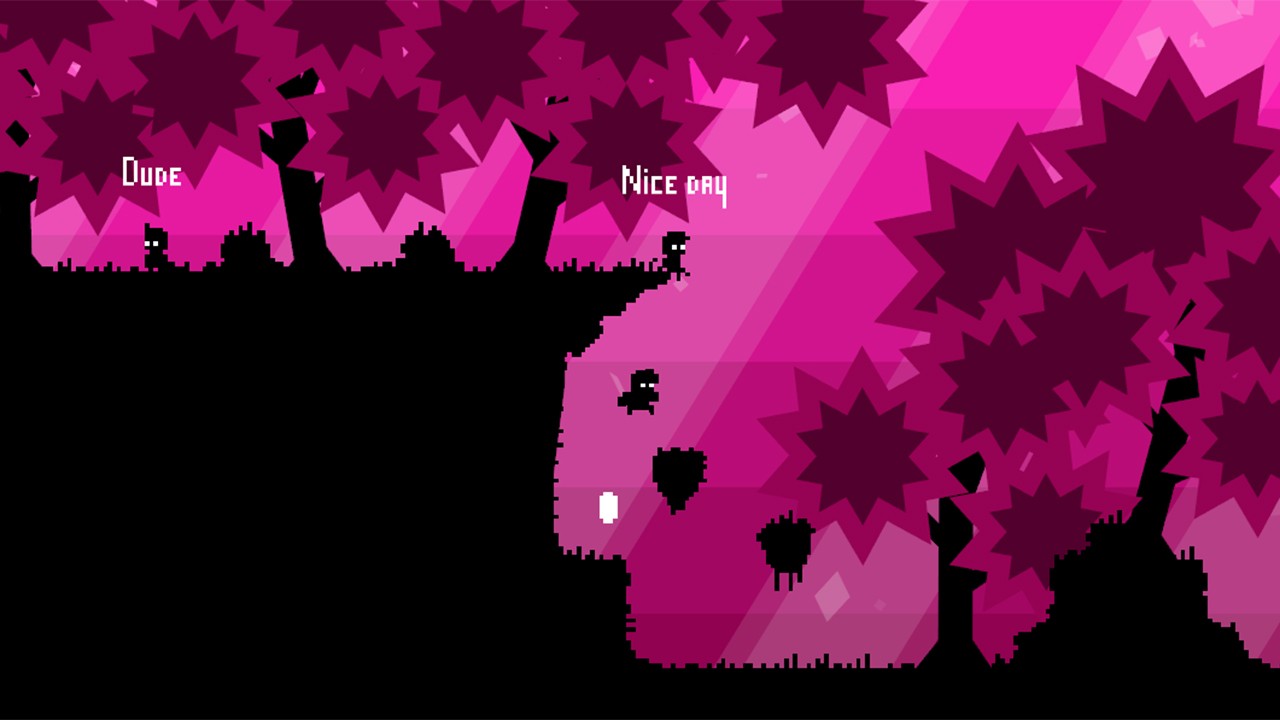 Electronic Super Joy doesn’t bring as much joy as it should. I found myself building callouses on my knuckles from punching the wall each time I died. I jest. I never got to that stage, and in all honesty, I had a riot with this game as it was so bloody hard and unforgiving, I couldn’t allow myself to get wound up as you could expect. But in the early stages, it does seem a bit of a chore; the jumping ability is just so dire!

In Electronic Super Joy, you play an evil disco version of Limbo, only with a hot pink background (mostly) and sultry voices making sex sounds. Yes, I’m intentionally being awkward here as that’s how it felt when I first played this in front of the family. It’s not remotely offensive, at least to me, but the orgasmic cries of the ‘sexy’ woman and dulcet tones of the male saying “ooh-la-la” every few times you die will have you blushing in embarrassment or giggling like a schoolgirl. It’s pretty funny as it’s so corny and absurd. In a good way, of course.

One of the words I hate most in life, to the point that I get borderline aggressive is journey. To put in context, I mean the marketing of a customer journey and their quest to buy a product using the UI… ok, I’m raging already. With Electronic Super Joy, the term journey seems more applicable as this feels like a long game as you plough your way through the obstacles, including the sticky walls and floors. It’s a party game after all, just don’t sniff it. The levels are of a reasonable length, but it’s the obstacles and sometimes scrolling screen that makes this one hell of a trip. It’s like a platform version of Sekiro: Shadows Die Twice as the difficulty can be relentless and you will die a phenomenal amount of times. Yes… it’s still an excellent game to play. It reminds me of a slow version, at times, of Super Meat Boy but horizontal scrolling rather than vertical.

One of the highlights of Super Meat Boy, one of my favourite games, was the fluidity in movement. Electronic Super Joy doesn’t have this and at times can feel clunky, and the jumping is just so slow. You can add a bit of fine-tuning to when you fall, but the worse part is getting used to warps. If you jump into them, you’ll reappear mid-jump often falling off a platform to your death. For me, I just couldn’t get the muscle memory accurate enough and would die countless times but didn’t give up. 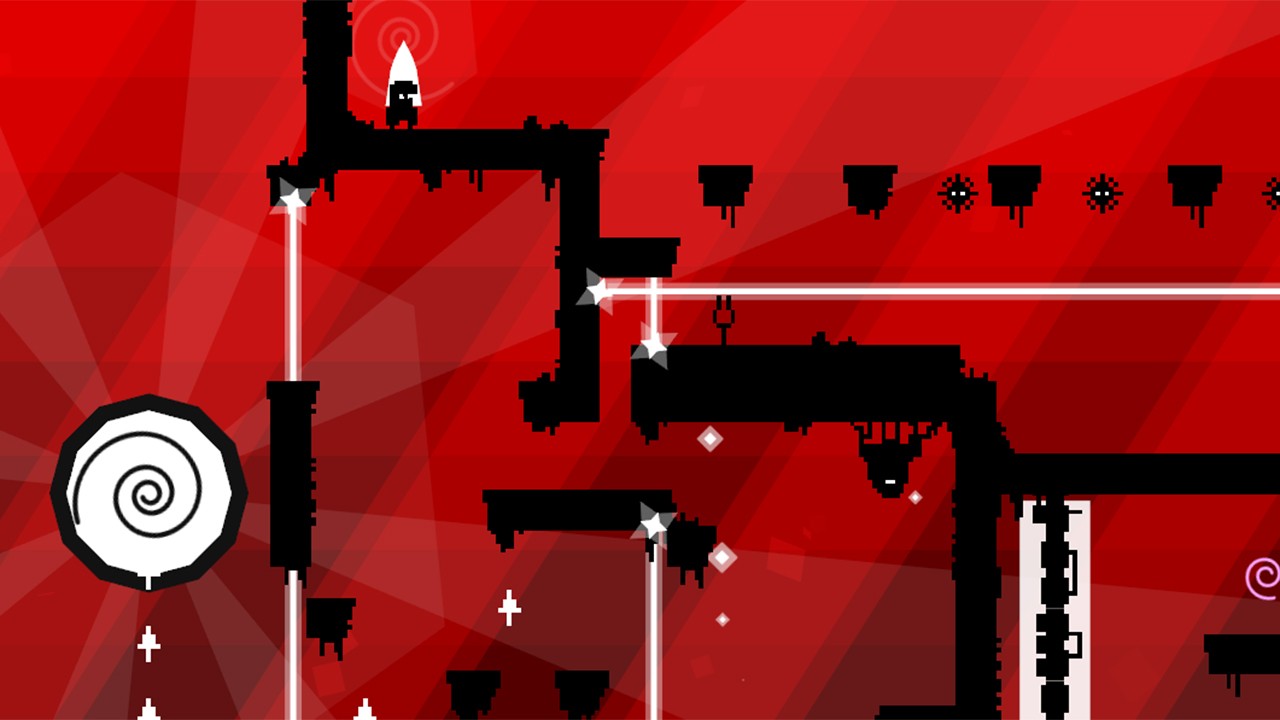 The main character and supporting actors scattered across the levels are all painted in silhouette pixels, with an ever colourful background. In terms of atmosphere, it’s like an everlasting party; each time there’s a moment of frustration, or as you get past a difficult area, a partygoer is egging you on, saying how cool you are and it gives you the drive to keep going. Your own cheerleading squad, in a way.

I don’t 100% everything in a game – I’m too busy and not that good, but I almost always finish a story and the base game when I go through one unless for three reasons. First, the game is a turkey, and I don’t want to entertain it (rare), next, just not having enough time to finish my backlog of games in their entirety (very common) or lastly, the game is so bloody hard, I just can’t progress. Electronic Super Joy is the latter but I am progressing. I want to say I’m okay, but I’d be lying. However, despite dying all these times and repeating the same jump or avoiding those spikes once more, the game brings out my inner masochist, and I want to keep pushing and finish to go onto the next stage.

When you do finish a level (not the first couple as they’re easy), and after multiple attempts, it’s incredibly rewarding. There isn’t anyone waiting for you at the finish line, there’s no cash prize, and it doesn’t make you any more popular with the opposite/same sex or love interest in the room. But, there are moments of transcendence when you finally beat a stage you’ve been chipping away at for so long. Unlike the aforementioned Sekiro: Shadows Die Twice, I stuck with (and still sticking with) Electronic Super Joy despite two steps forward, one step back. 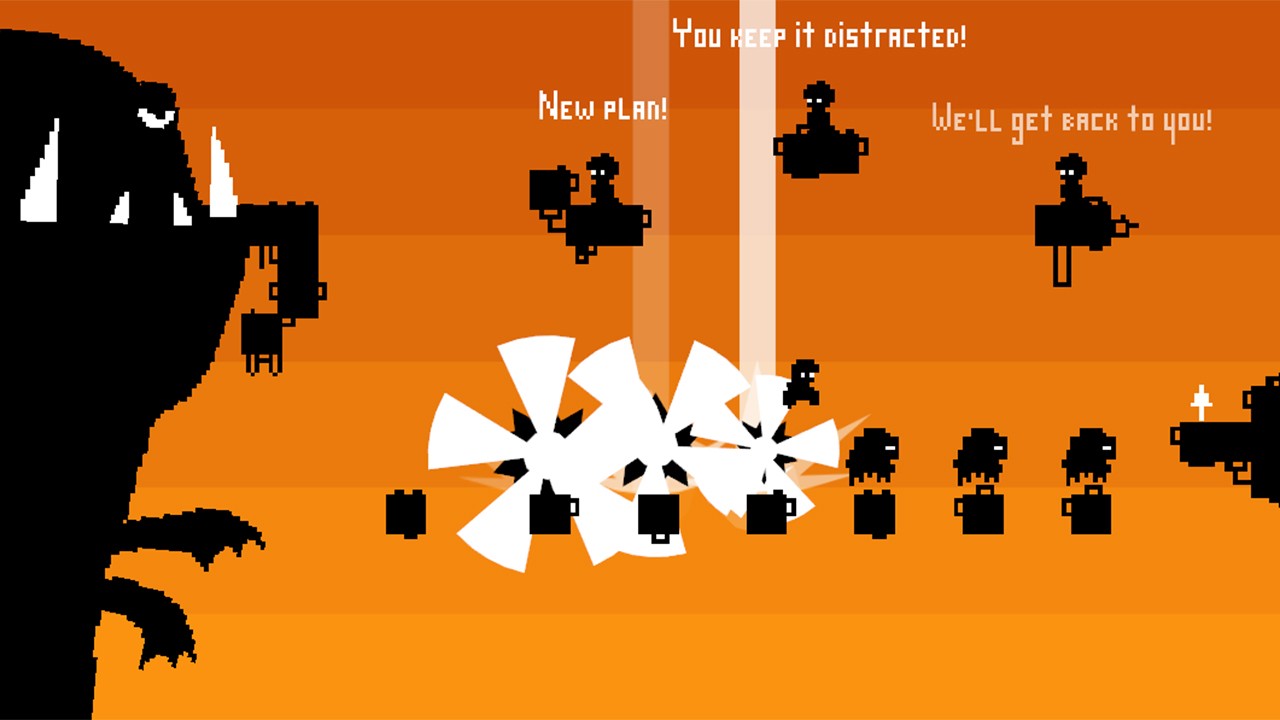 The background stories are a little secondary as you are informed that micro Satan farted on your dog, or your butt has gone missing, etc. as childish as it sounds, it is funny as it’s so irrelevant, but just adds to the overall humour of the game. Sarcasm is apparently the lowest form of wit, but fart jokes are where it’s at.

If you have the stamina for it, there are over 80 levels in the game as the Nintendo Switch version has inclusive DLC (Electronic Super Joy was initially released back in 2013, but welcomed with open arms to the Nintendo Switch stable after all those years), plus the original soundtrack. There’s a lot of love for the music. I liked it, but it wasn’t as amazing as I had anticipated, but that’s probably because I read the accolades on the official site and was perhaps coaxed into thinking it would change my life. It hasn’t, but it is excellent, nonetheless. Check it out for yourself, though. I’m more of a metalhead.

There isn’t much I can say about Electronic Super Joy that hasn’t been said before, but I can see why it made the transition to the Switch. It feels at home on the platform, as most of these indie titles do, but with the bonus content, I foresee this being a regular on my playlist until I finish each level. I’m not interested in the speed run element as I think the goal is to complete a level within minutes, not over an hour. I kid. It took me 14 minutes on one of the stages. If I saw the blueprint for the level before playing it, I’d say it was a doddle, but Electronic Super Joy is refreshingly challenging, without you losing your cool or street cred. It’s ok to die in the game multiple times. It’s expected.

Pixel art games are in abundance in the Switch, like so many ports of popular (and not so popular) titles from mobile gaming to Steam. Electronic Super Joy is one of those, and whether you played the original or not, this is a great platform game that will keep you up all night. The difficulty that is, not the sexy voices.