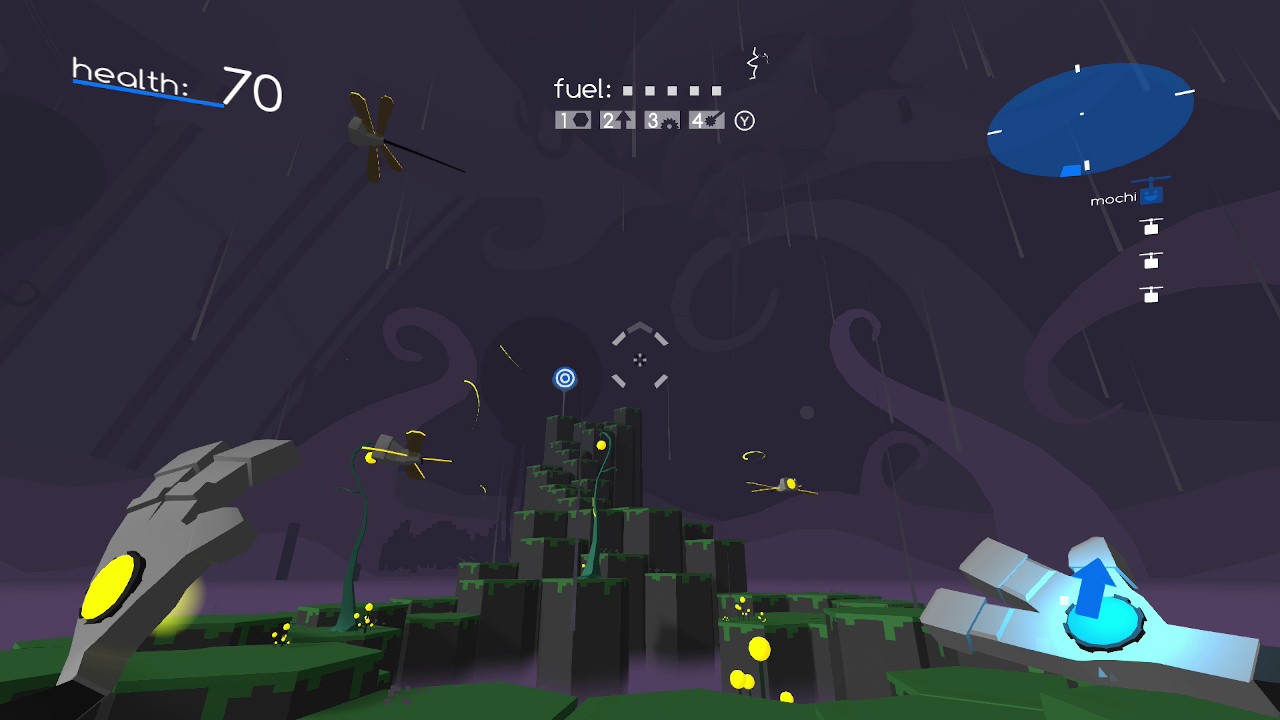 Cloudbase Prime combines so many elements of previous popular titles and attempts to merge them into a successful indie title. Upon loading the game you arrive on a mining colony and are immediately mocked for your lack of futuristic robot controls. Indeed this sets the tone for the rest of the game going forward. Once you are introduced to the basic controls, you are expected to manipulate and traverse the hexagonal land before you in order to complete tasks and goals in what is a relatively fun puzzle platform game.

The game combines elements of FPS gameplay in an attempt to mimic the Portal series in it’s aesthetics. As you progress through the levels you have the ability to move the tiles in front of you up and down, this has multiple applications in game, whether its allowing you to gain access to higher (or lower) grounds, propelling yourself into the air in order to continue your adventure or, and this is one of the most fun aspects, propelling an enemy high into the air . The main goal of the game is to find objects that both repair you/replenish health, and act as checkpoints as you progress towards a cannon which propels you to the next stage. Between you and your goal are a collection of robots who have malfunctioned and as a result, are firing projectiles at you. But armed with your trusty gun you too can return fire and eliminate the threats. 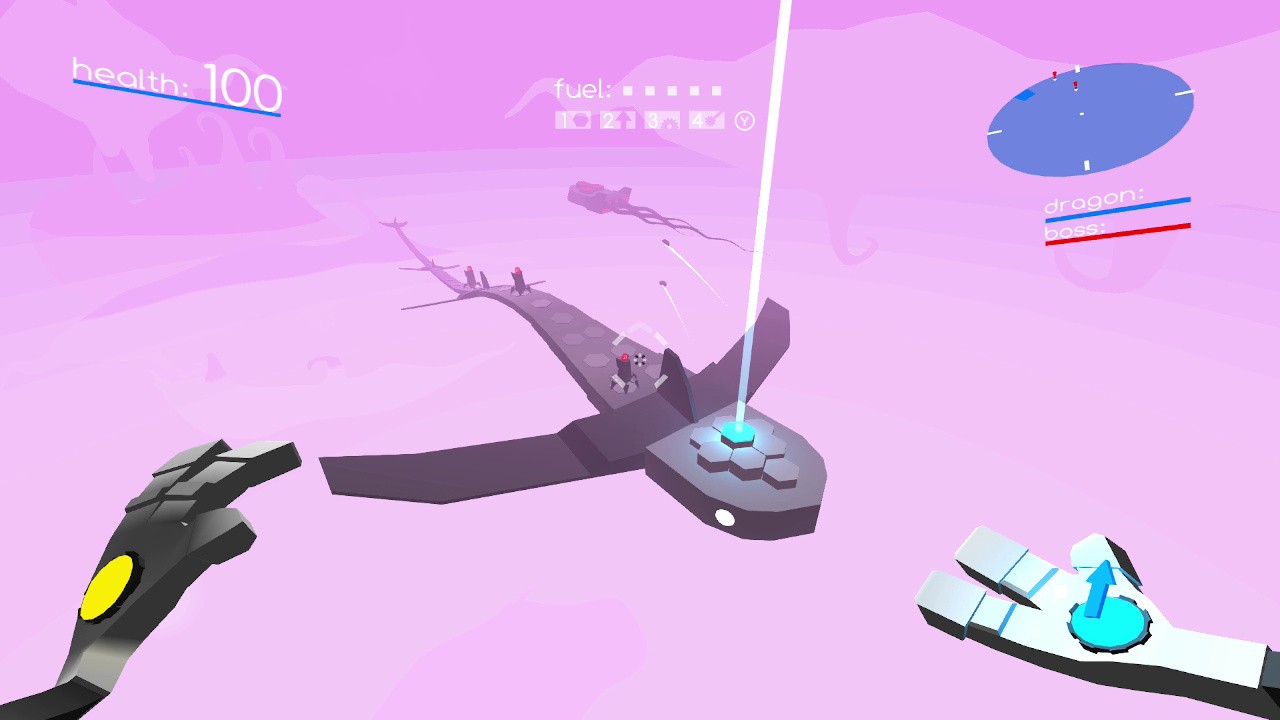 The gameplay itself isn’t complicated and the mechanics are a novel combination of platform and FPS mechanics that make for an intriguing concept, but unfortunately this only goes so far. The main issue is the control schemes employed in the game. Before I go on, I will add that there is an option early on to use gyroscopic controls and this does help a little. But the game suffers from a lack of intuitive controls to begin with. So many times I instinctively pressed B to jump out of the way of a bullet, only to find myself staring at the floor as I took damage. There were issues with trying to move the screen to aim with the right stick, often just missing the mark and I definitely felt the learning curve going into this game. Add to that the incremental bombardment of text that accompanied new features and I genuinely struggled to keep my interest.

The controller issues create a larger problem though, many players, I feel will miss out on an enjoyable experience because of frustrations over controls. The game is full of amusing dialogue that accompanies the player throughout. Indeed, from the very beginning you are chastised for using an “old video game controller” as a segue into teaching you the basic controls. The fixbots are another example of this, each having their own personalities and mannerisms that give you slightly more buy in to completing the puzzles than a simple fetch quest.

As you progress enemies start to differ and become more complex, but the variety is limited, which can also be said of the weapons. Boss battles are an interesting mix of thought provoking puzzles, with the possibility to “supercharge” your way through a conflict in order to progress to prevent players from finding the challenge preventative. 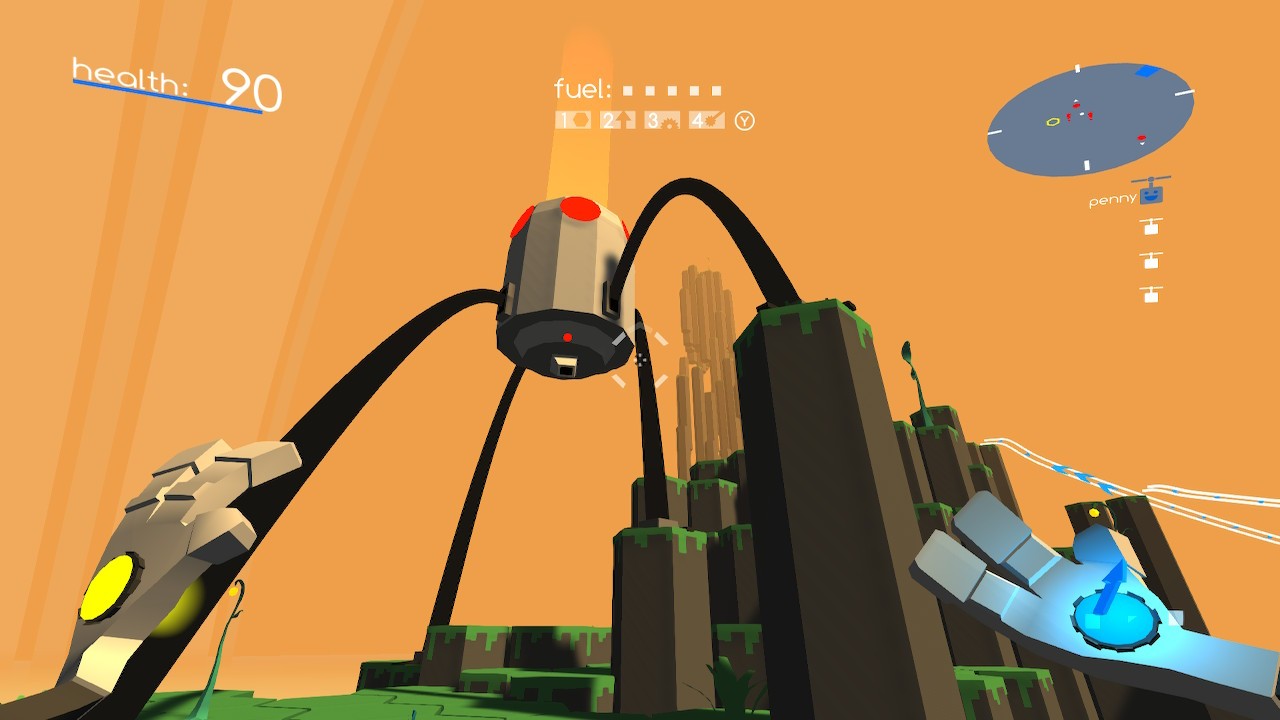 Aesthetically, Cloudbase Prime does a lot to try and look like a novel indie title whilst still calling back to classic tropes. There is an element of trying to do lots with little in terms of art design as the use of hexagonal tiles creates an interesting landscape and the use of colour and art assets to portray the various levels create a nice distraction from what is essentially the same repeated platform mechanics.

The enemies all have their own character designs and again, there is an element of “cute robo” as seen in games gone past. Even going as far as to having coloured weapon/ability mechanics harks back to the days of portal and the colour schemes themselves aren’t a million miles away from that homage. Combine this with a soundtrack that starts by sounding like a chiptune rock concert but quickly begins to feel repetitive and you have an experience that is enjoyable, but not something you will be quick to recall.

Overall, Cloudbase Prime is a fun indie title that provides a thoughtful and challenging distraction for a relatively short period of time, provided you can work through the controls and persevere with fighting muscle memory from years of playing platformers with the same rules. However, for the relatively minor inconvenience, you are rewarded with a fun, challenging game that is full of amusing dialogue and a serious sense of accomplishment when launching things into the air.

Cloudbase prime is a simplistic puzzle platform game that uses FPS elements and controls to create an environment that brings back memories of the portal series.  It has an interesting story line  with a good use of humour to immerse the player in the world.