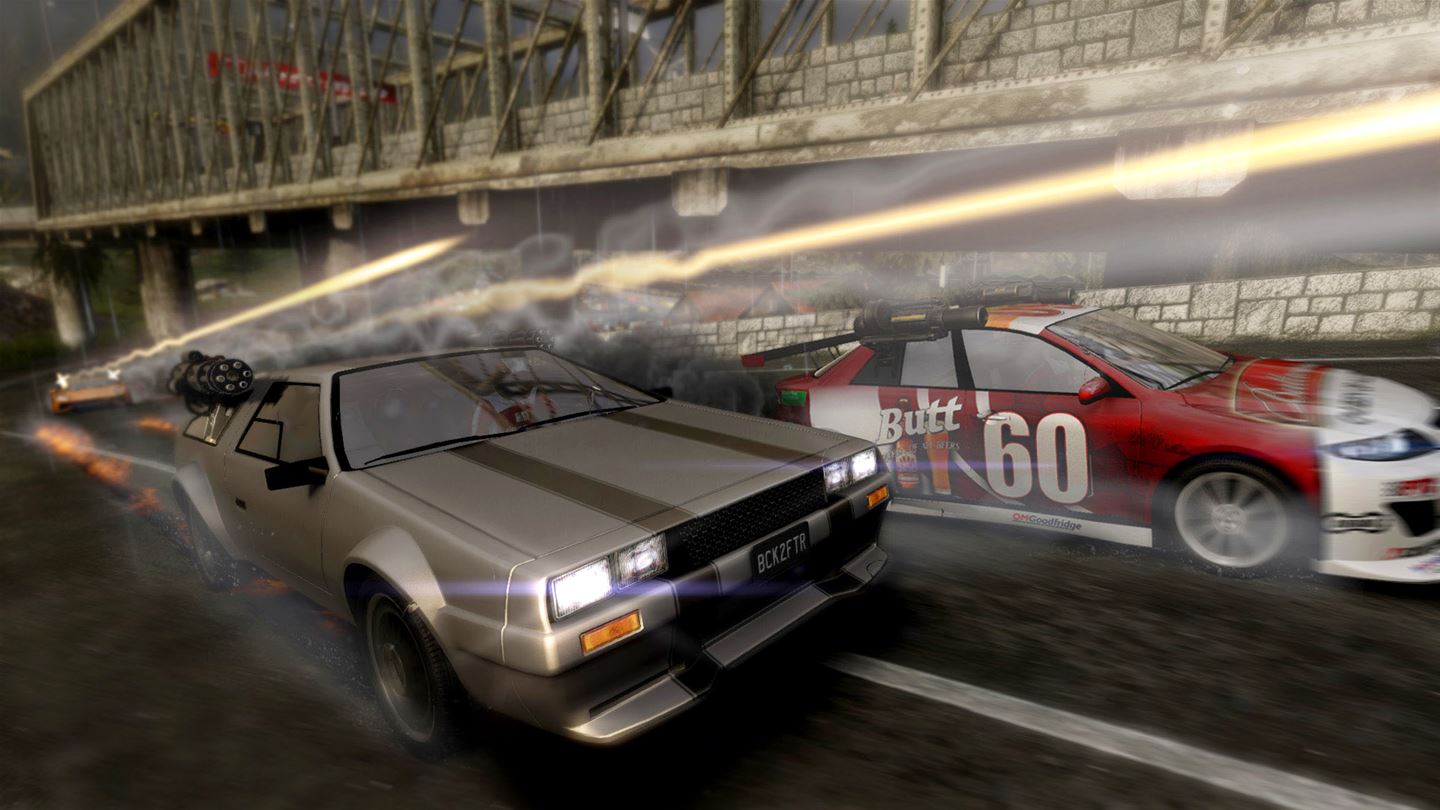 What self-respecting gamer looks at the controls before they begin? Not me, that’s for sure. Yes, R2 will propel your car forward, but the other buttons weren’t immediately intuitive as I found out the hard way while driving in 2nd position then pressing the d-pad to respawn. As Gas Guzzlers Extreme is a battle-based game, you drive around collecting weapons and the square button will be your attack. As can be expected, the aiming is entirely down to the positioning of the car, so if you’re tailgating, you’ll be able to target those in front, often destroying them entirely.

This was an excellent feature as whenever you get overpowered, simply take out the opposition and cruise the rest of the way around. As you’d expect, you start the available career mode with a bit of a banger – either a Reliant Robin or Fiat 500. They aren’t the actual models as there are no licensed vehicles, but you can tell. I’m not the biggest fan of unlicensed vehicles with their parody-based names and designs, but if the GTA series can pull it off, so can Gas Guzzlers Extreme as the lower-end cars are better than the high-spec ones. As a driving fan, I tend to prefer the mid-level vehicles as they have just the right speed and handling, whereas the high-end are just ludicrously fast. The same cars in Gas Guzzlers Extreme don’t feel overly fast; they lack the same charm of the entry-level cars when you’re starting out (as ugly as they may be), though having the alternative to a Dodge Viper as Shaggy Python was quite amusing.

If you’re a fan of customisation, you’ll be pleased to read that in the career mode you climb the ranks, earn a sponsor and upgrade your car. The usual options apply such as better components, spray paint and decals, but you can also enhance the weapons in the game. As this area is critical to gameplay, you’re going to want to invest in your arsenal. This includes new types of gun and additional ammo. Additionally, you can boost your stats by improving your nitro capacity and armour which will determine how long you’ll last in a game – which is a necessity as it will often decide whether you’ll reach the finish line. Though you can really smash it and stay ahead of your opponents, it doesn’t take much for them to catch up by taking a shortcut then rocket launch your chassis. 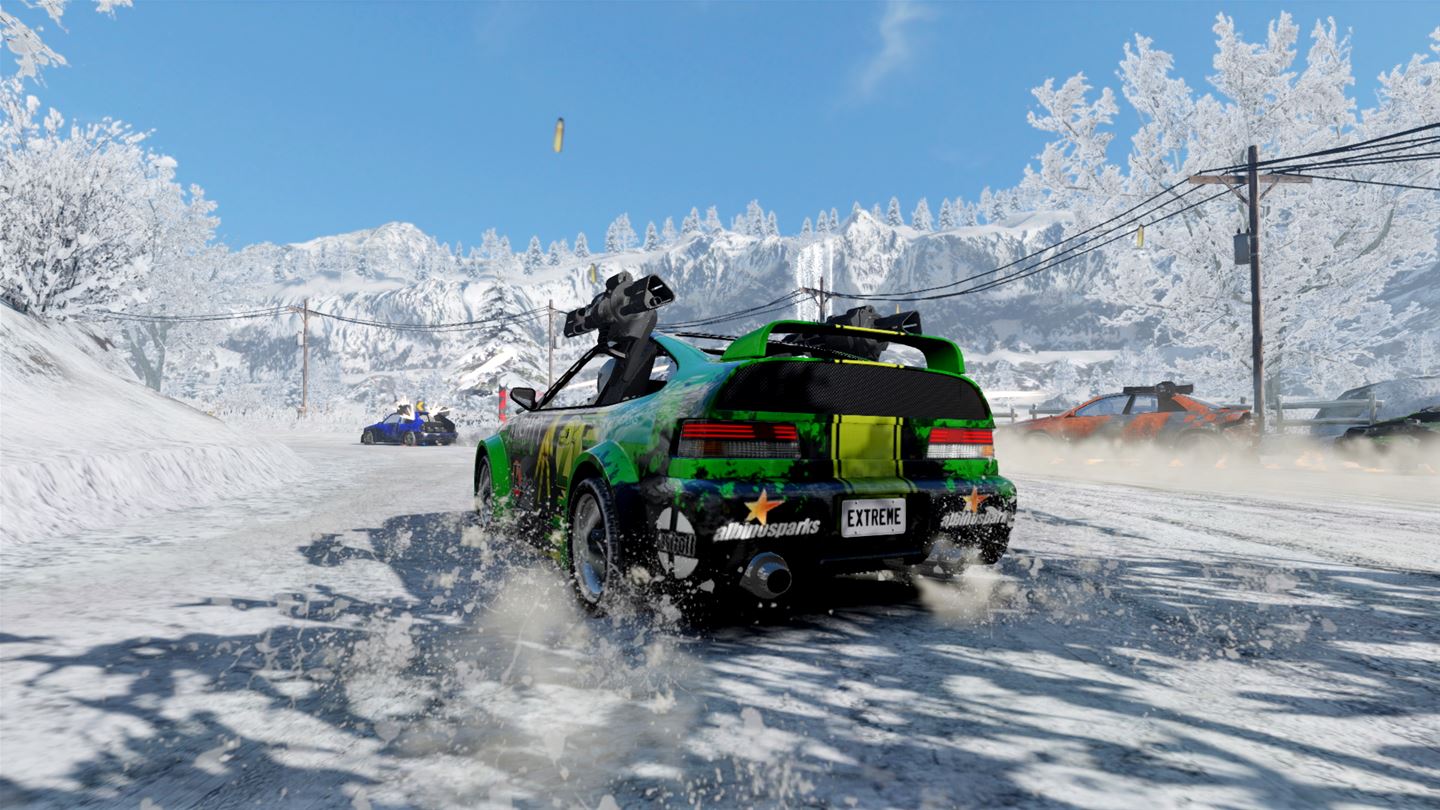 When I first started to play the game, ignoring all sort of instructions, I thought I was racing online players by default. There weren’t any silly AI names like Biff or Bruiser; instead, there was Sam Urai and Jack Kass, so assumed I was playing others online. Then I saw the roster with the likes of Bjorn Toulouse, Som Dum Guy and Luke Warm – ah, touche, developers. I haven’t come across Seymour Butz, but if I don’t, I’ll be writing to my MP (I wrote this part of the review early – he appears). The available trophies aren’t far from this either with the likes of the Peiness Trophy, or Camel Toe Trophy; you kinda get the impression on who this is aimed at. Blue collared citizens, thank you very much.

I was half expecting Death Race, but instead, I got Duke Nukem. That’s a good thing, as the original 3D game was one of the best FPS titles out there. However, this is a driving game so the Duke Nukem element was a voice over and boy did it get old fast with the various cliches spouting out the driver’s mouth every time you got an upgrade and were about to unleash lead in your opponents’ rear end. Ooer. However, you can choose from a selection at the menu options and the one I went for wasn’t too far from Duke as it was an Arnie impersonator. Aside from choosing your driver’s dulcet tones, you can change the difficulty settings, and there’s no shame in lowering as you won’t get penalised for it. Not me, I played it on the hardest setting, I can tell you that as you’ll not want to see any proof.

Bearing in mind that you are racing bots and not racing online in Gas Guzzlers Extreme, there is quite a bit of lag in races where the car will jolt forward, dropping some frames in the process. One of the many power-ups is a smoke grenade that removes visibility, prompting you to crash. The frame drops were obviously unintentional, but have the same impact as you’ll be driving on a straight then for what seems like a very brief jump, you’re on a bend, french-kissing a wall. It doesn’t happen all the time; otherwise, I’d probably have bailed, but it’s frequent enough to include it in a review. 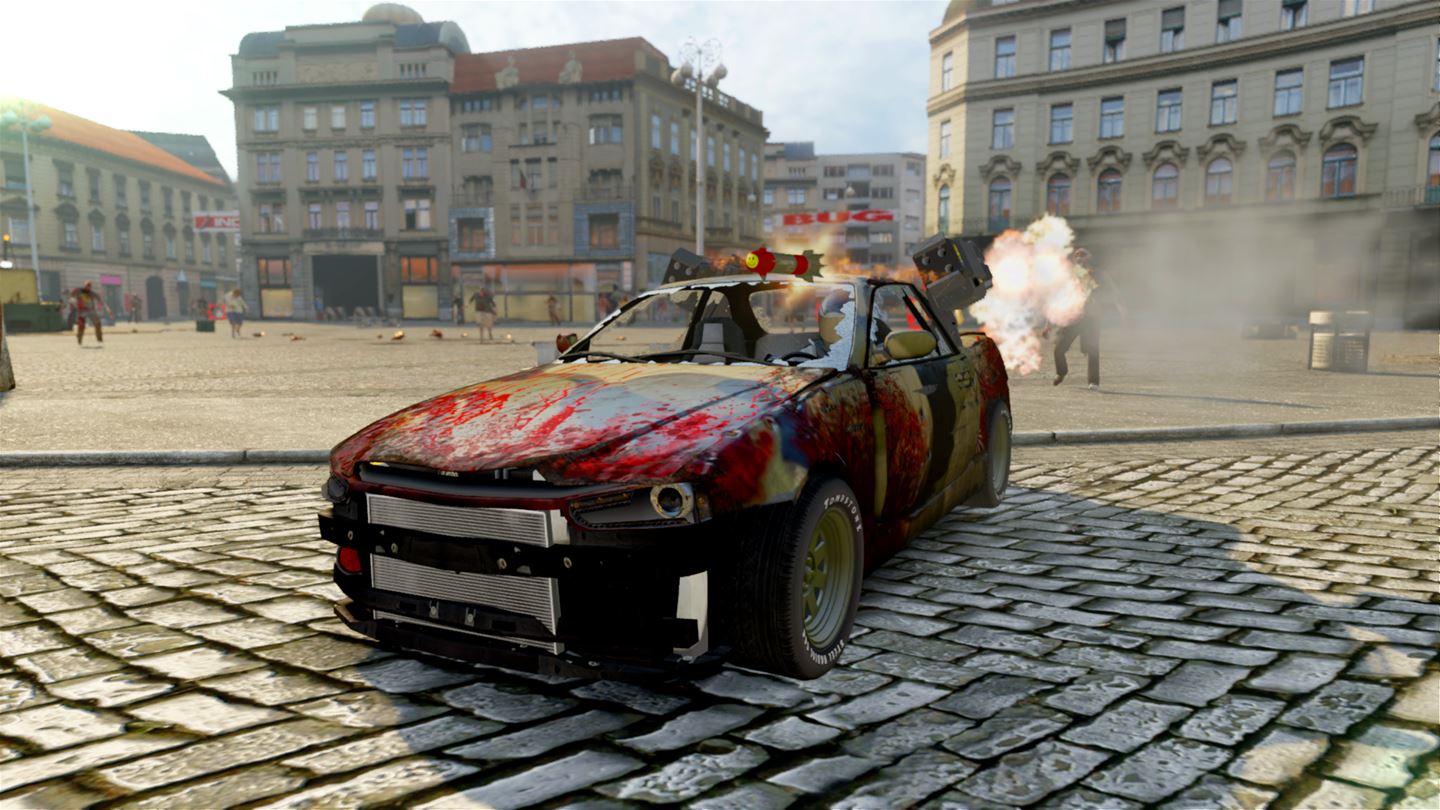 If you win a few races in a row, you’ll gain a sponsor who start giving you an additional 10% of your prize money but lose the momentum, and they’ll drop you. For a while, you don’t need the money so much as you can make enough from the earlier races through kills and pulling off feats, but once you win your first tournament levels are bigger, and there’s more at risk. The prizes are pretty sweet though – I thought the rocket launcher was my be-all-end-all until unlocking the minigun. I’m not going to be cocky and say the first races are easy, but after the first tournament, there are a few more butt-clenching scenarios where anyone who dares walk in front of the TV when there’s one lap to go WILL suffer my wrath.

Progress further up the ladder then, and when you reach the top, you’re able to enter the tournament. Tournaments don’t result in ‘permadeath’, but they cost to register so you need the funds beforehand, and you could forfeit a sponsor if you start losing races. Other events are unlocked too such as the last man standing event and more outside of the tournaments, but capture the flag sucks. I’m sure there’s someone out there that likes this variation in a driving game as much as when they enjoyed a title like Destruction Derby, but the decision to add this doesn’t translate. Or maybe it was because it was too frantic for me to understand what team I was on or where to take the flag?

Gas Guzzlers Extreme has the title and initial appearances of the equivalent of a straight-to-video title, but it was surprisingly good. The visuals are pretty decent, the handling a reasonably tight arcade-type experience and the number of customisations and level option make it very replayable. Due to the hit and miss nature of having weapons in the game, a race where you’re dominating can quickly end (the knockout mode), so there are lots of times you’ll replay the same tracks over and over again. And you know what? It’s not remotely monotonous, despite how it sounds.

Let’s not kid ourselves; as a fellow fan of driving games, they are pretty much on repeat, but Gas Guzzlers Extreme has plenty of reasons to keep coming back, and I have no regrets in being surprised once more by a relatively unknown title.

Repeat plays of tracks to get to the cup.