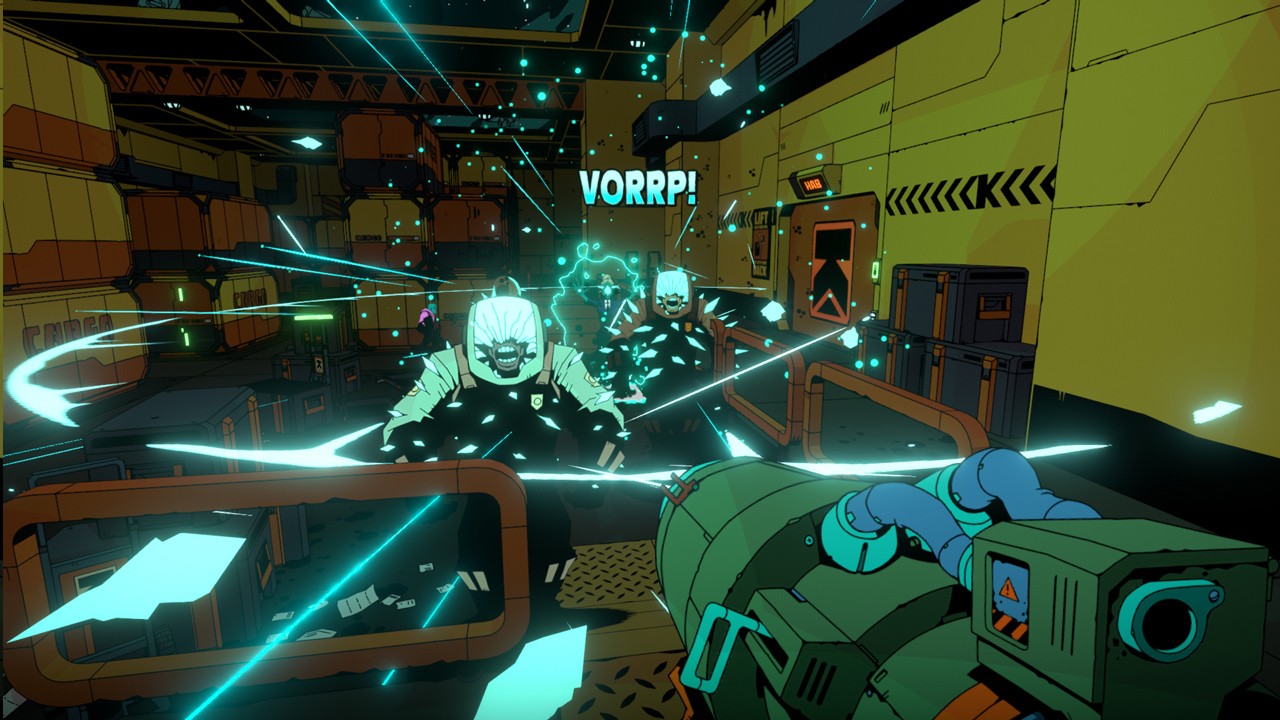 The genre of First-Person Shooters hasn’t found a natural home within the architecture of the Nintendo Switch. Despite containing one or two exemplary efforts within its library, the majority of such games can suffer from loose aiming mechanics, an underwhelming oomph in gunplay and a general slipperiness in movement. In order for such games to be largely successful, they need to be tight in both movement and control; something that doesn’t necessarily translate well to the inaccuracies of the Joy-Con controller. However, roguelikes have taken to the Switch like a duck takes to water; boasting some truly heroic efforts that have ensured a status of becoming true classics. So what if you were to combine an FPS with a roguelite then? Well, then you’d end up with a game like Void Bastards, as it plunders a release upon the Nintendo Switch.

Developed by Blue Manchu and published through Humble Bundle, this science fiction, first-person looter-shooter, sets you up as one of a series of dangerous criminals that are imprisoned aboard the malfunctioning Void Ark; a huge space-based prison complex. Reactivated by an on-board artificial intelligence, B.A.C.S. and monitored by the backpacking, P.A.L., you regenerate within the cockpit of a fighter craft, the S.T.E.V. and embark on a mission within the Sargasso Nebula; a region of deep space that houses a number of, derelict, alien vessels. Depending on your fuel and food stocks, you then dock and infiltrate a vessel of your choice, as you plunder their valuable resources and loot for components in order to build and upgrade weaponry and armour, stock up on needed fuel and food supplies and work towards an overall mission objective of obtaining a citizen pass to freedom and repairing the malfunctions of the Void Ark.

However, the floating hulks of alien vessels are rarely uninhabited, as a variety of species patrol their numerous rooms and corridors. Aliens such as Spooks, Juves, Scribes, Patients, Glowtrotters and more, all stand in your way to prevent you from getting your hands on their valuable loot. Partner this with an ever decreasing oxygen gauge, radiation hazards, oil spillages and a life meter, your foray into each alien craft is never an easy one (unless you play the game on easy difficulty, of course). Armed with your initial weapon, the Hefty Regulator pistol, you must dispose of the alien races, search the vessels for vital loot and make it back to the S.T.E.V. alive in order to reap the rewards. 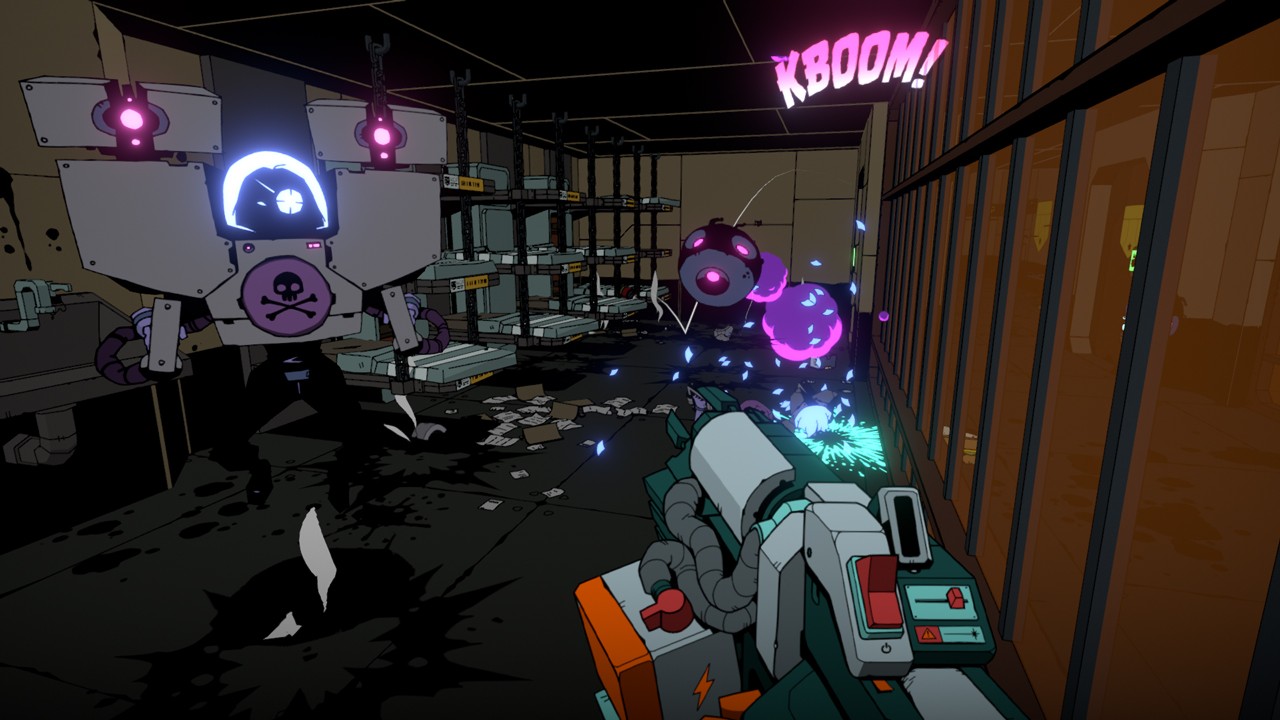 To help even up the playing field though, there are a variety of elements to give you a heads up, as well as a head start. From an overall map of the nebula, you can plot a course to whichever vessel you want to explore, as long as your supplies allow you. Each vessel comes with a detailed analysis of what you expect to find on-board. Alien races and their numbers, specific loot items and any hidden traits, such as reduced oxygen, boss types or locked doors, to name but a few. Once you are docked, you can then view a floor plan of the vessel; allowing you to plot a route through the derelict hulks. These mini-maps provide useful information, such as the Helm that provides loot locations or Oxygen stations that replenish your air supply. Some vessels also contain health regeneration stations, kiosks that provide perks to your characters and coffee dispensers that temporarily boost your firepower.

Your task is to loot each vessel and make it back alive. Once you achieve this, the accrued loot that you find on-board, can then be used to craft new weapons, upgrade existing ones or manufacture vital components towards your main mission objective. The more you craft, or the more loot you acquire, the more options you unlock; thus bolstering the abilities of your characters. The game runs a rinse-and-repeat formula, one that contains a great deal of repetition, but also one that is immense fun to play through and rewarding in your efforts. Crafting new items and experimenting with them, working out how best to traverse each craft, or what vessels to plunder all add to produce an exciting and tactical level of play; all of which is further bolstered with some tight mechanics in both gunplay and movement with conventional and gyroscopic control schemes.

Its roguelike elements come into play with a procedurally generated interior of each vessel, a variety of character traits and the ability to keep all generated items from previous playthroughs. It all adds to help keep things fresh and unexpected. Although the layout of each vessel changes, the general content of each ship remains the same. For instance, specific rooms can all be found on the majority of vessels. Once you learn what each room holds, your task of plotting a route to them is made significantly easier, as you can plan on what information you know. However, the game also throws some surprises at you, such as some vessels needing power to be restored via the generator room before you can begin plundering its resources. Another element of surprise also comes with your central character. Should your present character die, then a new inmate is regenerated to carry on the mission. 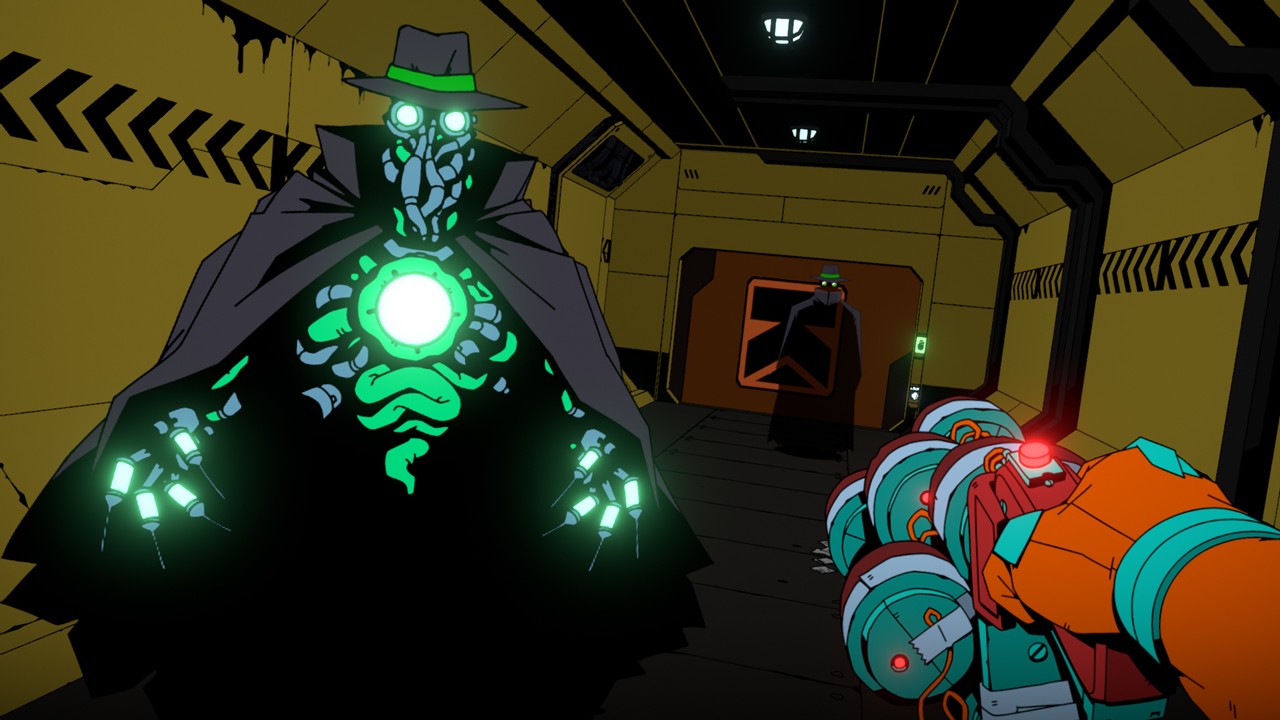 These characters come with a set of random traits, such as the ability to map certain resources, or possess a better hit rate. Some traits though, can produce some interesting and hilarious results, such as a persistent cough that generates noise, or inmates that maybe colour-blind and can only see in black and white, whilst others can be short or very tall; creating a different perspective of the game each time you play with another character. Despite its repetitive nature, the game does a fantastic job of keeping things within a rotation of surprise, such as differing vessel layouts, loot opportunities, enemy types and character traits. It’s all presented in a glorious comic-book styled and cel-shaded aesthetic that makes Borderlands look old hat and an audio quality that shines through with hilarious alien voice-overs, creaking hulls and on-board loudspeaker announcements throughout.

On a technical point though, the game does posses one or two minor nuances. The most frequent of these came in the form of the odd frame-rate drop when faced with multiple enemies. It causes the game to stutter slightly, as if losing a second of input and then catching up to suddenly to propel you forward or fire a bullet after delay. However, it never got to a point where this became frustrating or annoying, although on the higher difficulty levels, it can make life a little bit more riskier. I also has one occasion where I boarded a vessel and none of my weapons were able to deal any damage to either aliens, automated sentries or security cameras; something which ultimately ended with my demise. I wasn’t sure if it was part of the gameplay, due to the random nature of some traits, but this is something that I only experienced once, so am putting it down to a technical error. Thankfully though, due to the nature of the game’s roguelike elements, this didn’t cause me to become frustrated with it.

Overall though, Void Bastards is an absolute masterclass of a game. Despite a couple of technical issues, all of its elements shine brightly to create a pleasing experience for all that play it. It’s rinse-and-repeat formula does produce a repetitive play-style, but its gunplay is so satisfying and the loot collection, so rewarding, that you can easily forgive its shortcomings in this respect. This is largely due to, not only its enjoyment in playing, but its elements of surprise that adds an extra layer to the familiarity of some of its layouts. You’re constantly fighting against elements, such as enemy types and oxygen levels, bringing a sense of urgency and tactical planning, but its rewards make it so satisfying, that you find yourself immediately planning your next move, or next vessel to explore, or towards what component your going to build next. Although its overall campaign holds a ten hour or so game length, its constant regeneration and random elements, makes this a game that offers near-infinite amounts of long-term playability and fun; making this a game that is far from being void.

Loot and shoot your way through the immensely playable and enjoyable roguelike that is Void Bastards.