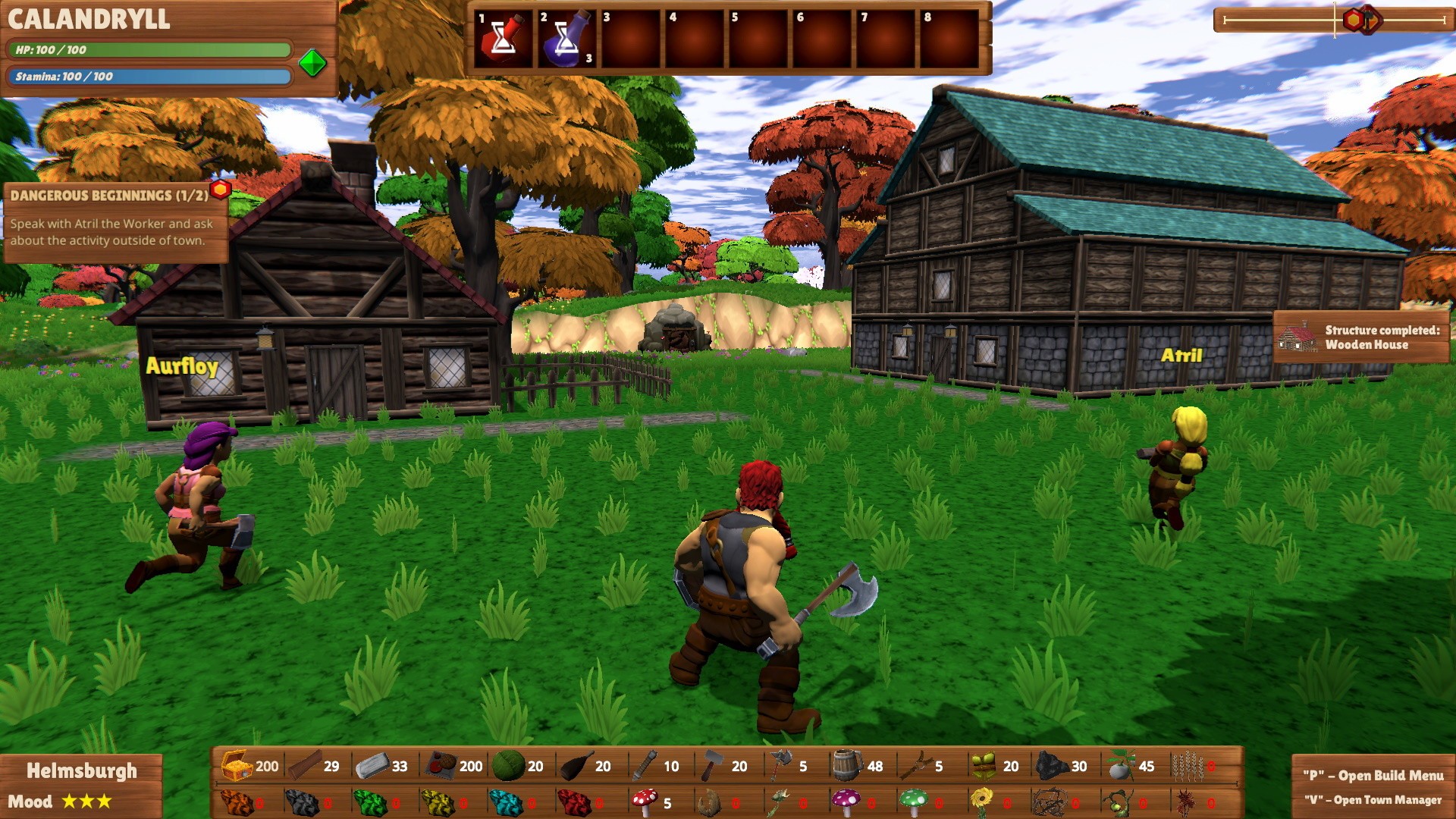 When you no longer feel that you fit in, what do you do? Do you put up with it, or do you pack up your bags and attempt to start a new life for yourself? Well, guess who did the latter, our protagonist from HammerHelm, that’s who! This Action/Adventure city builder has you controlling a rebellious dwarf. He dreams of creating a nice life and city above the ground, no longer does he want to hide in the darkness, he wants the sun on his back, and the wind running through his beard. Developed by SuperSixStudios, and published by SOEDESCO, this title is currently in a BETA phase and is available on STEAM. As the game is in its very early development a lot of my opinions could be outdated very quickly, so all information is correct at the time of this preview being published.

Played out in a third person perspective, this dwarf city builder asks you to balance, creating a thriving community with adventuring and completing quests. The whole game rotates around your ever expanding empire. You must maintain a peaceful, happy and prosperous lifestyle. How do you do this I hear you ask? You are given the opportunity to create; shops, bakeries, breweries, farms and other buildings. Each of these fulfil particular needs of your people, and will keep them happy while they work tirelessly. You are given complete free reign of how you play this title. Do you fancy exploring the island, trying to find enemy camps, dungeons to search through, and the location of rare resources? No? If this doesn’t take your fancy, you can spend your days chopping trees and harvesting stones, to help to build structures. Either way, HammerHelm keeps you busy, and there is rarely a quiet moment.

Everything in this fantasy world is finely balanced, the gathering of resources is not too high or low, the flow of quests isn’t overbearing, and the village management is easy to understand and control. The world in which the adventure is set is pretty small, and the number of landmarks and places of interest is quite minimal. This is something that needs to be looked at quite urgently as I found exploring the same areas got tedious pretty quickly. With the amount of work that is required to have a bustling city, I wouldn’t fancy having to plough hours into a game where I was forced to rinse and repeat the same locations, just to progress the storyline. 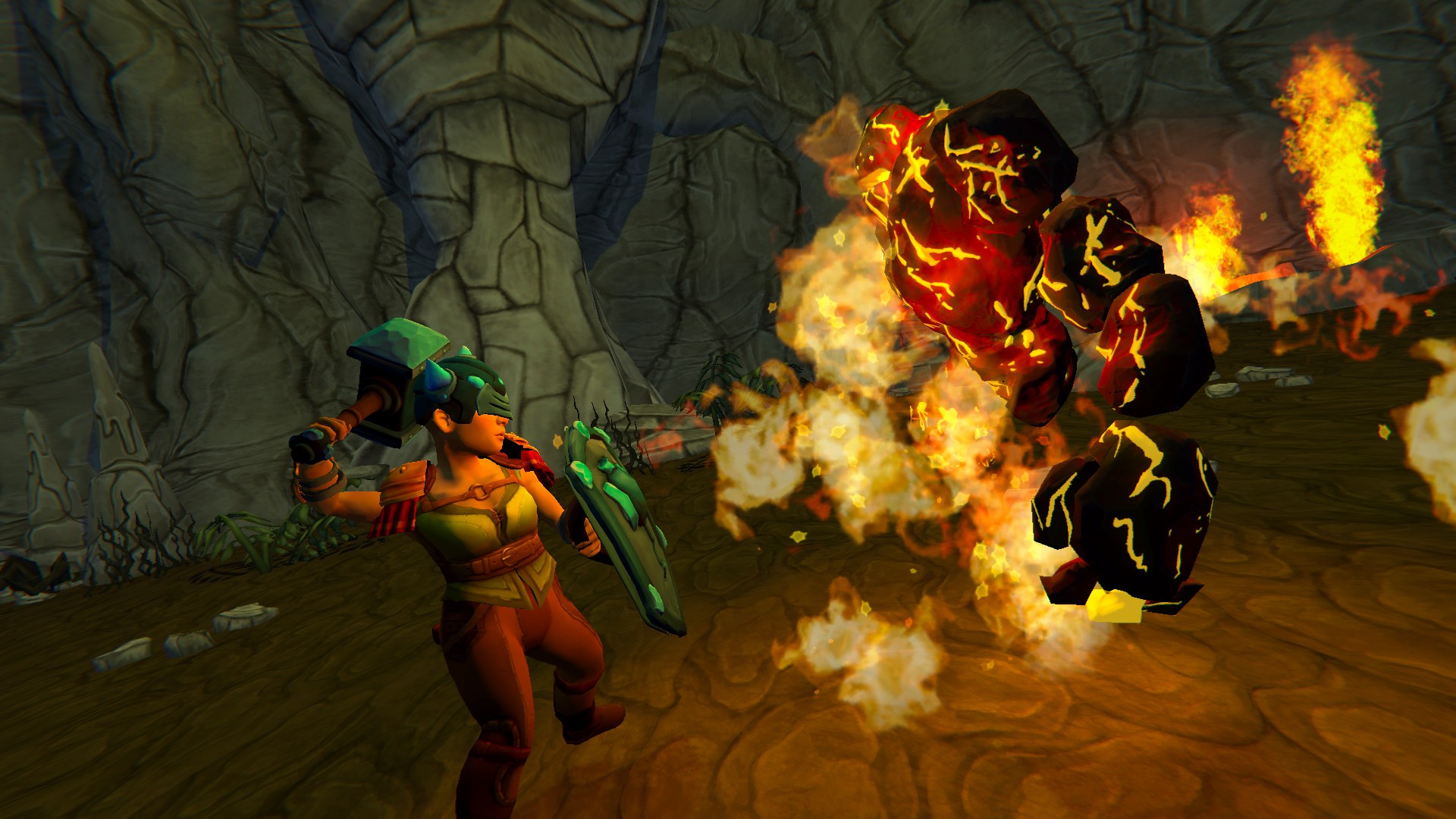 A lot of the gameplay focuses around fighting, and completing quests. Both of these at the moment are quite clunky. You will however find that the action of swinging your weapon and attacking enemies is pretty smooth. It felt that very little thought had to be applied when in battle, just tap the attack button, and success was all but guaranteed. You are free to kick enemies to the floor to give you a respite. This was designed to be used when attacking more than one enemy, however, you can’t change focus from the creature you are attacking. I found that I was being hit from all directions with no ability to parry, unless, I defeated my current foe. This was a ridiculous game mechanic which made you feel completely alienated from the task you were completing. The quests are provided to you by your villagers, and they fall into 3 categories; clear camps, search caves and dungeons, and finally fetch and deliver items. They come in various forms, and are not particularly challenging to complete. Each reward you with XP, and gold. Like all adventure games, XP is used to level up your character, whereas the gold is used as one of the key resources in building houses, shops, and other structures in your lands. The developers have promised that content updates will be implemented regularly, so hopefully the range of quests will increase greatly.

The city building element is simple to understand, and a reasonably in depth concept. You are responsible for balancing the people’s needs, with your own desires. Do you build a brewery to ensure everyone can have ale? Or do you build a metal workshop so you can have better weapons to fight with? The choice is yours, whatever one you choose, just make sure you have enough resources to build it, and a spare worker to man it. There is no point having a nice new building with no one to occupy it. Building houses will provide you with 2 more bodies, 2 additional pairs of hands to work for you. But a new house also provides you with 2 extra mouths to feed, this balancing act becomes more difficult as the population increases. This person to resource management is a key concept of any city building game, and I believe SuperSixStudios has got the balance just about right. It’ll be interesting to see if they can maintain this as the game develops, and pushes to its full release.

As this is a Beta title I wasn’t expecting perfection from any of the main aspects of the game. This open minded approach was necessary as I soon discovered that it is full of glitches, bugs, frame drops, light leaks, and many other minor issues. There were a couple of game breakers, but they were few and far between. Let’s start with the graphics, and visual approach. I was reminded of: Monkey Hero, World of Warcraft and Zelda Ocarina of Time. Obviously, it is much rougher, but the similarities in the colour palette and the character models are there. The different biomes on the island look unique, and the use of lighting in each area helps to create atmosphere, and brings each section to life. There is an enchanted forest which looks like an image from a children’s book. Then there are the abandoned haunted ruins, the darker colours and heavy shading give this a daunting feeling. These all still need a lot of work, but the foundations are laid for a real nice and varied landscape to explore. A number of items that appear solid allow you to pass through them, the most prominent example of this is the fencing around any of the buildings. When you fell trees the waste product just disappears, and the trunks magically dissect themselves. The developers should either enforce that you cut the fallen tree, or allow it to be collected whole, in its current state its confusing, unrealistic, and represents a lack of finesse.

I love fantasy titles, it gives the developers such freedom to reimagine classic sound effects. HammerHelm has played it particularly safe in this aspect. The action is accompanied by a familiar score, percussion instruments create a medieval atmosphere. It works well, but it just didn’t blow me away. The sound of weapons flailing, and magic firing was insipid. There was no change when you equipped different weapons, and the characters displayed no emotion when collecting resources or when they were triumphant in battle. I was, unfortunately, left longing for more. SuperSixStudios could make the world so immersive if they improved the audio. Trees creaking, and cracking as they fall to the ground, NPC dwarves talking and cheering. Orcs and Goblins scream as they plan to decapitate you. All of this would make you fear for your life, and create empathy for your people. At the moment it’s just a hollow vessel, that is doing the bare minimum just to get by. 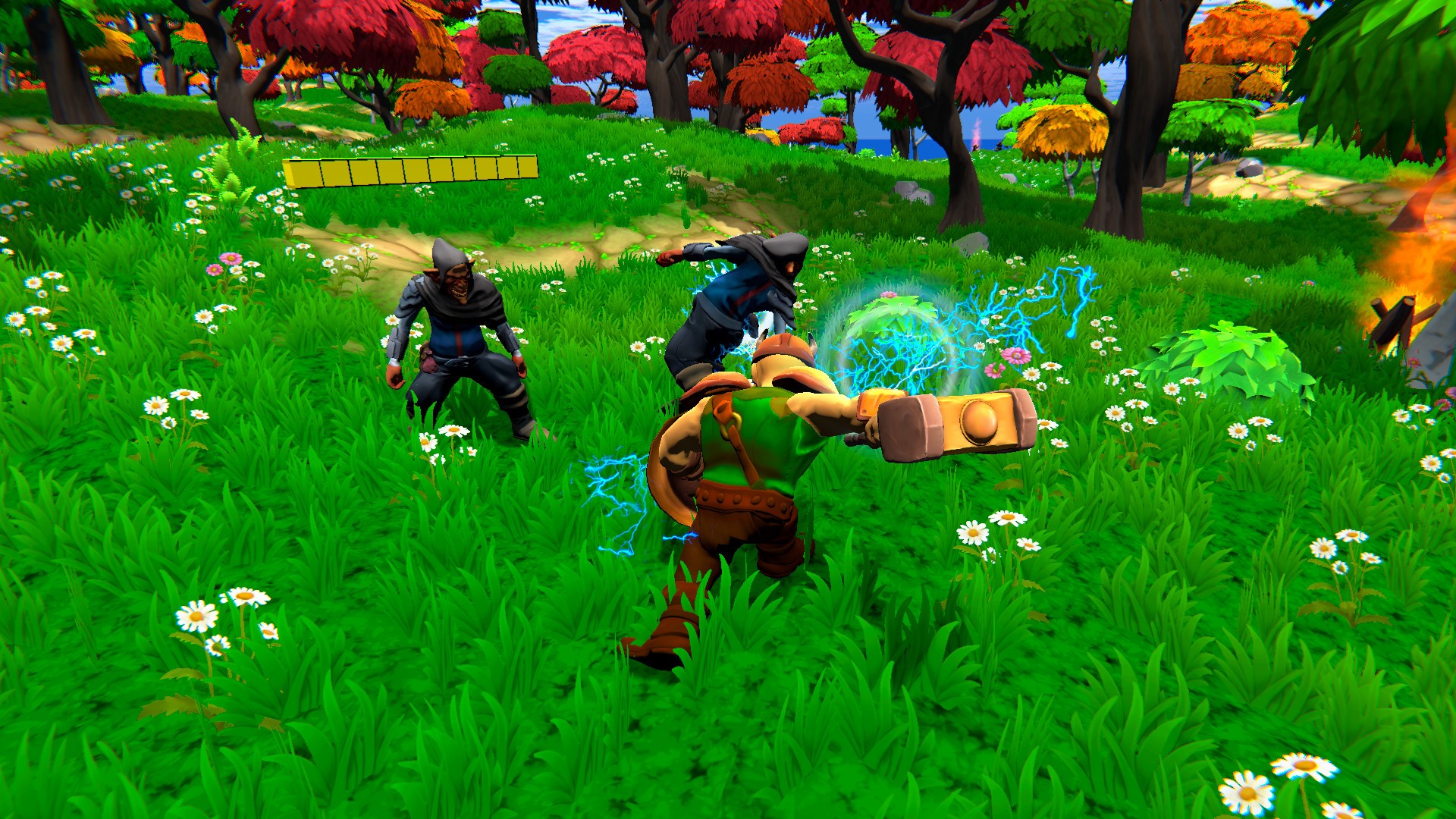 Coming from a mainly console background, my first port of call is to check whether a title has full controller support. I know, I know, the PC gods will place me in a wickerman and burn me for my indiscretions, I just find using a controller more comfortable. HammerHelm states it allows controller support, unfortunately, this isn’t the case at the moment. Though some elements do work, not all the buttons have been mapped correctly, and many of the key tasks, including walking are unable to be achieved other than with a mouse and keyboard. Luckily the control layout is very straightforward, and easy to follow. On screen prompts remind you how to complete most tasks, and with the combat being so robotic, there is very little risk that you will not be able to muddle through. I found throughout that there was an awful lot of input lag, this made completing tasks slow and arduous. I believe as the gameplay is optimised this should be reduced considerably, and won’t be noticeable come the final release. I feel that this will work well with both control methods, my only concerns with using a controller, is the inventory shortcut keys will not be as useful, so hopefully the developers will address this with some form of radial submenu.

Though you are free to decide how you wish the game to play out, most of the actions follow a very linear path. The quests are all very repetitive, even if the theme alters slightly, the core elements are all exactly the same. A lack of customisation options will frustrate a number of gamers, I would have liked the chance to make my town look exactly how I desired. In its current build there is a considerable amount of fun to be had. I found that I would play for a few hours and then move onto something else, this prevented me from being bored. Once the developer starts dropping more content I can see this having the potential of being a title where you could sit and play for hours at a time. If SuperSixStudios were to consider a Co-Op option, then this would complement what they have created already and would vastly increase the longevity, as well as drawing in a wider community of gamers.

HammerHelm looks to merge several genres in order to create an unusual title. At the moment its diversity really dilutes the gameplay. The city building mode is not advanced enough to test hardcore fans of that genre, and the action/adventure RPG fans will feel disappointed by a number of the key elements that should make this game stand out from the crowd. With a great foundation, and plenty to work on, this has got to be a game for the future. If the developer can keep inputting content updates, and create a long quest line with a number of sub quests, then I believe this will give the action some focus. In its current BETA form you’ll be presented with hours of fun, and plenty of glitches. Would I recommend this? Yes, yes I would. If you fancy trying this one then make sure you come into it with an open mind, getting to full release is going to be a bumpy road, but one that I think will be worth taking. It’s time to leave the protection of the dwarf fortress, and venture to the overground to build a bright future for fellow minded dwarves.

Who says that dwarves have to live underground. Break this convention and create a new life for yourself under the sun.