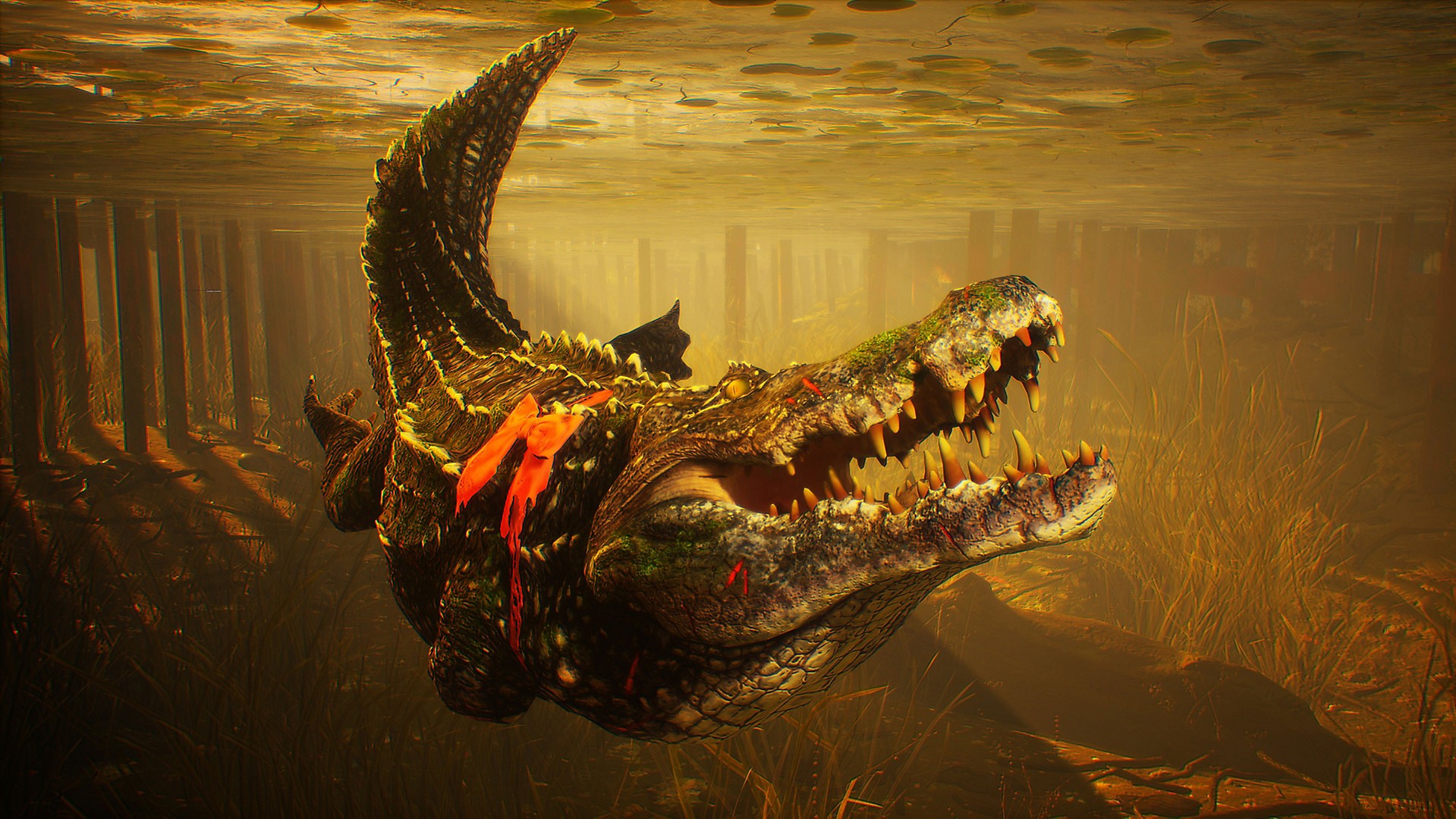 The world is a vast place, and we happen to know more about planets that are millions of miles away, than we do about our own oceans. The deep blue sea has long been a subject of interest and fear for me. Being able to swim freely, diving underwater and enjoying that moment of weightlessness, that is until you see a murky shadow in the distance. Your brain tries to convince you that its just a harmless fish, but your instincts tell you to run, after all, no one wants to be caught in the water when a shark is around. Maneater developed by Tripwire Interactive and Blindside Interactive, and published by Tripwire Interactive and Deep Silver is an action Role Playing Game, a ShARkPG if you will. The premise of this title flips this human logic on its head. You take on the role of a Bull shark who must evade human hunters, while completing tasks and evolving to fulfil your full potential.

The game opens with a rather gruesome cinematic. Scaly Pete the self proclaimed master shark hunter has caught himself another trophy fish, he is bragging about his ability to the film crew who are shooting a reality TV show on board his boat. A call comes in that peaks his interest, and the hunt begins, Scaly Pete wants you to become his next victim. You begin life as a fully grown adult bull shark, you are given a list of tasks to complete, these form the backbone of a basic tutorial that helps you to understand all the controls required to become a fearsome fighting machine. As you progress you are given a quest to attack a group of humans on a beach, being a shark this comes as second nature to you. Once the massacre at the beach is complete you come face to face with the shark hunters, try as you will, you are destined to fail. Scaly Pete takes great pleasure in capturing you, and gutting you alive. On opening up the innards he is amused to discover that a pup is alive, he marks the fin with his knife for future reference, and allows is own ego to distract him, the pup retaliates and severs Pete’s lower arm. As you are flung overboard in a fit of rage, this is where the true story begins. You are a lone pup who must grow to avenge your mother’s death, and take down the human hunters once and for all.

Your life now revolves around hunting other wildlife, and evolving to grow into the deadliest sea predator the Megalodon. You have a total of 7 separate areas to visit, each has its own set of collectables to hunt out, and ecosystem. You will be asked to complete various tasks; hunting lone predators, attacking groups of fish, destroying boats, and my personal favourite, eating humans. In order to complete an area you must take down its apex predator, each has its own unique challenges, and you must be prepared to alter your gamestyle in order to succeed. Like all good RPG’s Maneater has a progression tree which is linked to XP earned from killing anything and everything, as you evolve you will unlock additional perks that allow for a better sonar, and increased health. As you become more infamous you will gain mutations that will increase your defence, speed, agility and attack. These are all interchangeable and can be upgraded with nutrients that are obtained by munching any living creature. Fancy gaining a set of electrical impulse teeth? Play Maneater! Do you want to protect yourself from enemy attack with a bone Exo skeleton? Play Maneater! Fancy knocking out your foes with a whip of your tail? Yes, you guessed it, play Maneater! 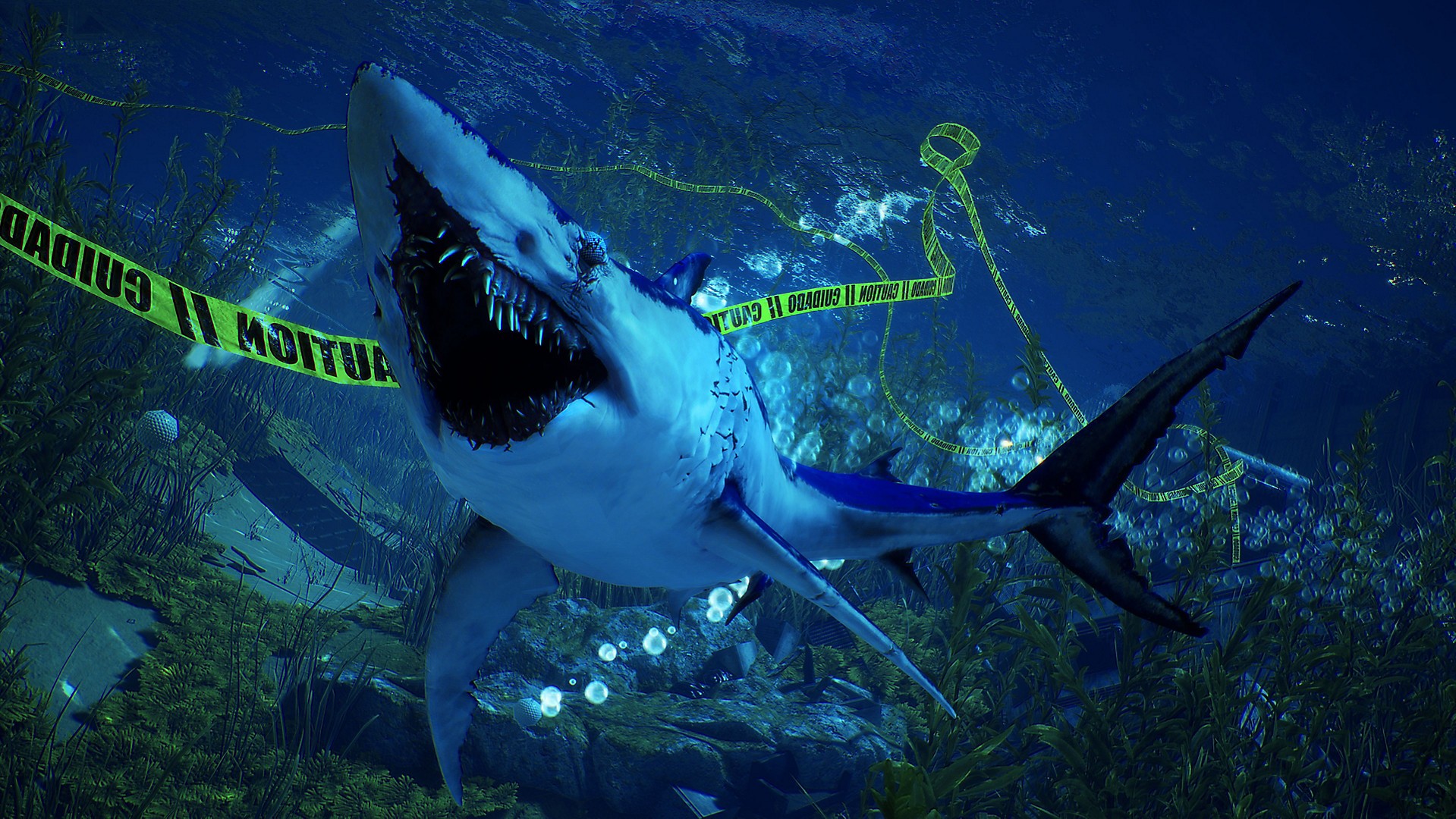 The developers have clearly taken influence from several big franchises. As you maim and kill innocent humans, your threat level increase, this is reminiscent of the infamy stars, and being wanted in GTA. The hunting of collectables and action elements reminded me of Far Cry. A game about being a predator is going to rely heavily on an in depth combat system. If you decide just to go all out attack, you are going to lose the fight 9 times out of 10. Planning and strategy must be implemented and this style reminded me of the Dark Souls series. With so many massive influences in this game, it was always going to be a challenge to balance them, and make sure that the title felt unique to the development team, I believe they have achieved this, and for me each element works well to create a unique open world RPG experience.

The gameplay is completely open, and once you reach the adolescent stage you have free reign to move around the map. You will note that certain areas are locked depending on what stage of evolution you have achieved, this restriction ensures that you will keep returning to the action. With hidden areas to explore, and 3 different types of collectables to locate I recommend waiting until you are fully grown before trying to gather everything, otherwise you could find that locked grates will prevent you from exploring further. The side quests are key to ensure that you are strong enough to take down your nemesis Scaly Pete, the focus of the story and the end goal revolves around munching and thrashing your way through all 10 bounty shark hunters. When all 10 are removed from the face of the planet, you will be given the opportunity to avenge your mother’s death.

Bull sharks live in the most inhumane environments, they can swim between salt and fresh water. They love to hunt in murky waters, and are happy in both shallow and deep waters. The developers have created some awesome environments to explore. The use of vibrant colours emphasises the natural beauty that can be found in this underwater world. The clouding of the murky water reduces visibility, and I jumped several times when alligators appeared suddenly out of the mist. The character models and animation is smooth and well created, and each species is instantly recognisable. The stomach churning stains of blood fill the water after a frenzied attack, and inspire you to keep munching away. The inbuilt sonar, and game map make traversing the world an easy task, collectables are tagged up as question marks, so if you are lost in searching for a particular item, or you are just hungry for some fish then the sonar is going to be your best friend. A game that could have easily pushed a cartoon style, has done well to keep things realistic. If you didn’t fear sharks before, then Maneater will certainly make you think twice.

I opened by mentioning a reality TV crew recording the action, this carries on through with audio narrative by Chris Parnell, the host of reality TV show Maneaters Vs. Sharkhunters. The voice-over work creates an educational and amusing twist on a gruesome tale, all of the audio clips give a small insight into the world of shark hunting, and draw out the background to the deplorable human being that is Scaly Pete. As you glide around the ocean, you are accompanied by a quiet and serene musical score, this gives you a feeling of calm and belonging. Once the atmosphere changes, and danger is sensed the music takes a more sinister turn. Stringed instruments play out in a minor key adding a daunting and aggressive feeling to the action. The sound effects of leaping out the water, and crashing down with your prey in your mouth inspire you to perform more elaborate attacks. The crunching sound of your jaws, and the thrashing of your tail is delightful. The developers have worked wonders with the audio, and the only thing that takes you out of the immersive moment is when you eventually lose your life in battle. 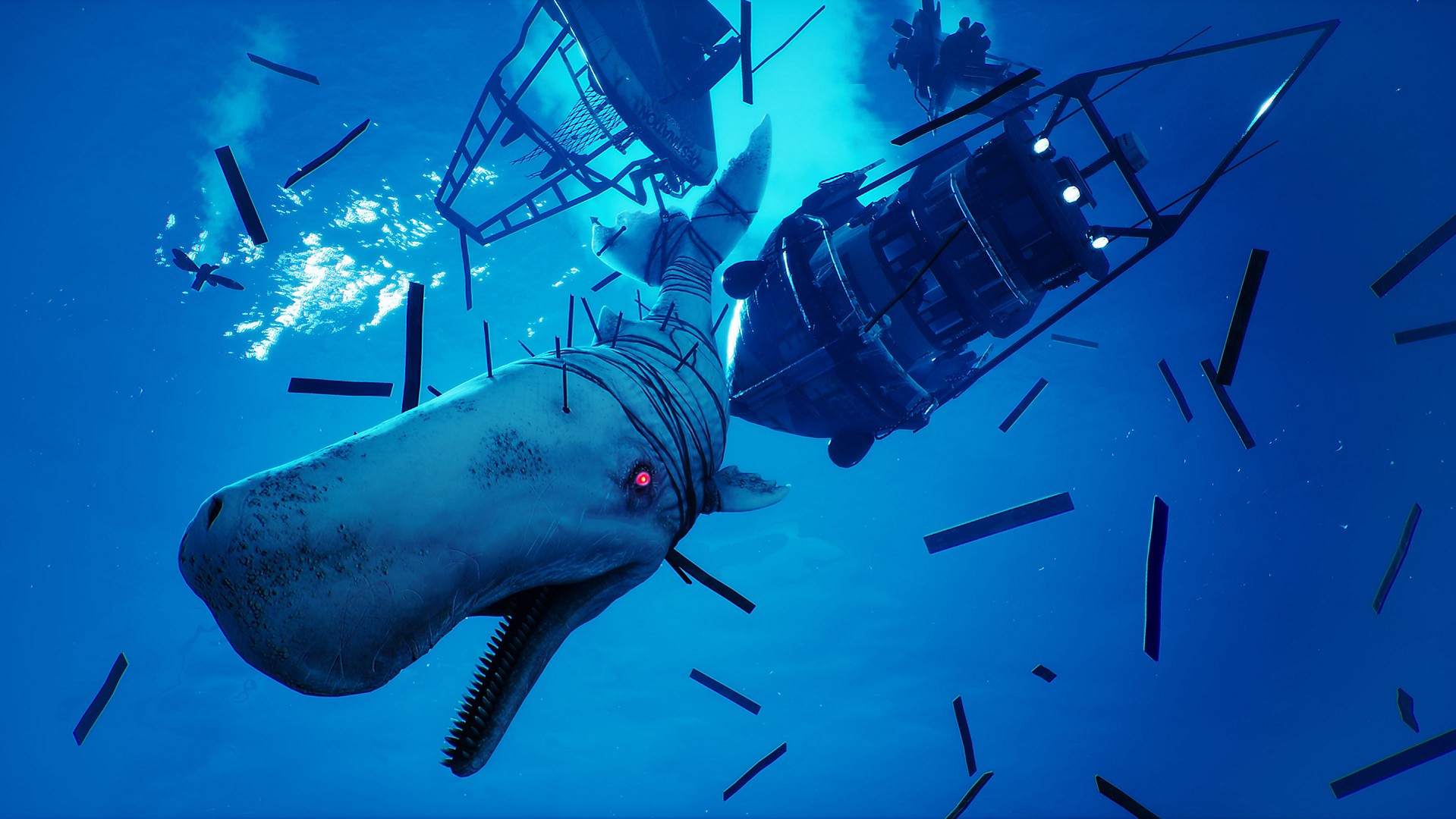 I absolutely love everything about this title, except for one thing, and that’s the movement controls. I’d say this is more down to my ability, than anything that the developers have done, but I found that the use of dual stick analogue for observing and moving was quite confusing. Whilst everything was calm this wasn’t an issue, but when I was in a fight, and trying to avoid several foes, I found that I would be swimming all over the place while desperately trying to watch what the enemies were doing. I also struggled to land attacks to begin with, in the first few hours death was almost guaranteed, so remember, practise makes perfect. As already mentioned you will need to plan your attacks, different strategies are required for each different predator. Other than the movement issue that may or may not impact you, the controls are very straightforward and you’ll spend more time enjoying being a shark, than worrying about the ability to control it.

Being an open world RPG you will find that there is a lot to keep coming back for, once the main quest is complete you have all the side quests and collectables to focus on. Evolution to become a Megalodon comes through natural progression, as does most of the achievements. I personally will keep playing this once I’ve completed it, mainly because I enjoy attacking the humans who think its ok to swim in my water. The main section of the game will take approximately 10 to 20 hours to complete, add another 5 or so on for the additional elements, and you have a reasonable amount of predatory gameplay to sink your teeth into.

From the first moment I saw Scaly Pete I knew he was a wrong’un. His cocksure attitude and his disrespect towards other humans and sharks paints a target on his back. What better inspiration to take down this appalling man, than to avenge your mother’s death. From the early stages where a battle with an alligator is a chore, to becoming the apex predator, this is an enjoyable brutal action RPG that will inspire you to love and fear the ocean in equal measures. I guarantee that you will circle underneath boats chuckling to yourself, whilst humming “Duh Duh, Duh Duh, Duh Duh……” JAWS ain’t got nothing on Maneater. So evolve yourself, destroy the hunters, and become the king of the ocean in this shARkPG.

Life as a young orphan can be difficult. Evolve and become the apex predator you are destined to be. Scaly Pete and the other hunters won’t know what has hit them in this shARkPG.