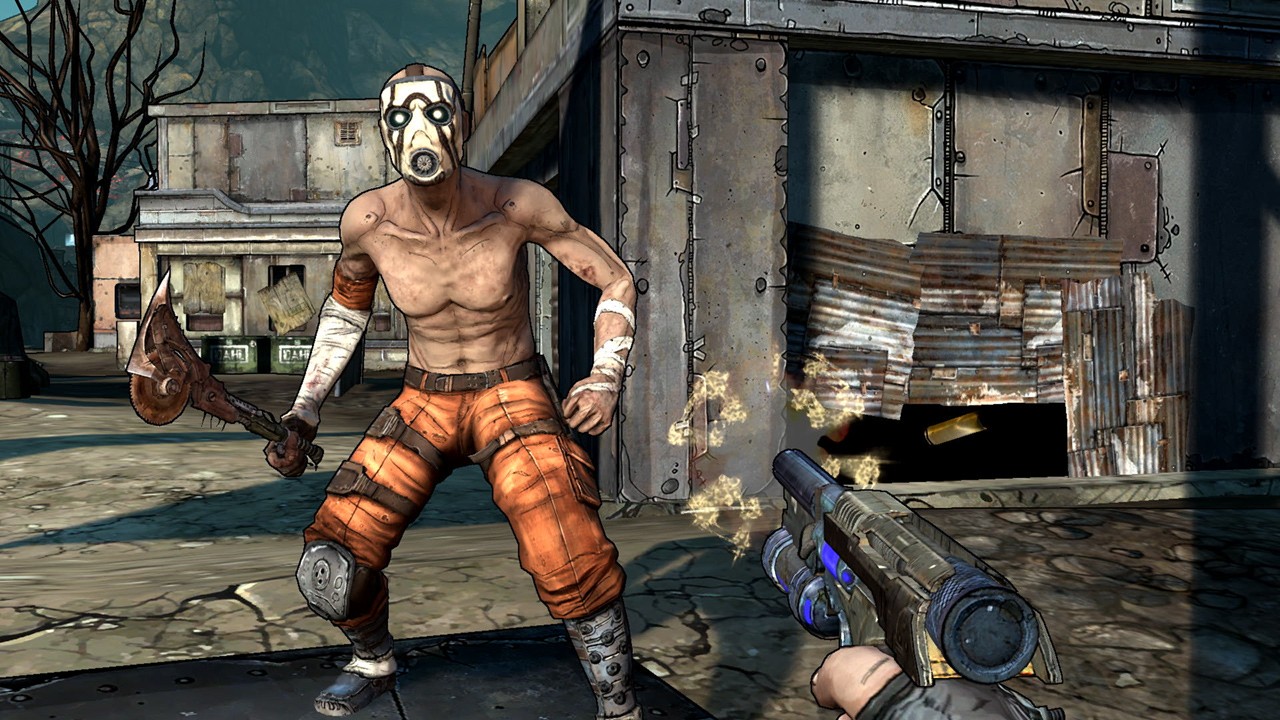 If I were to call out one game that I’ve double dipped, or even triple dipped into, then it would have to be the Borderlands series. I’ve played through the original Borderlands on the Playstation and Xbox home consoles and revelled at the portability of Borderlands 2 on the Playstation Vita; despite its version losing a lot in resolution. It’s certainly a series that can boast a release on all of the major consoles during the last and present generation, and I certainly wouldn’t be surprised if we see it again during some point of the next gen of consoles. Despite my reluctance to leave the world of Pandora, I do have to admit that the PS Vita version was my favourite, not solely because of the gameplay, but because playing Borderlands on a portable device was a dream come true. Well, guess what! All of my dreams have just come true again, as Borderlands: Game of the Year Edition loots a release onto the Nintendo Switch.

Developed by Turn Me Up Games and published through Take-Two Interactive, Borderlands: GOTY Edition takes us back to where the series first started, as we once again don the shoes of a vault hunter, on our own personal quests throughout the badlands and wastelands that comprise the world of Pandora. If none of that makes any sense to you and you’ve never played any of the Borderlands games before, then I’ll provide a brief run-down of what this edition of the game entails. Based upon the Planet of Pandora, you take on the role of a character from a number of classes: Roland the Soldier, Mordeicai the Hunter, Lilith the Siren or Brick the Berserker. Your task is to hunt down the existence of a legendary myth; the Vault, a mythical place of Alien technologies that is rumoured to hold untold treasures and wealth.

Primarily a looter-shooter, you play in a first person perspective as you run a series of quests and side missions that takes you across a variety of regions that comprise the planet as a whole. Along the way, you come across a series of NPCs who offer you jobs; as well as collecting a host of bounties from a series of message boards. Aided by a mysterious Guardian Angel and the ever-helpful robot guide, CL4P-TP, or Claptrap as he is affectionately known, you embark on a journey that sees you battle against a variety of beasts and scavenger compounds on your journey to uncover the truths behind the vault. The underlying narrative provides a cause to push forward, but the real enticement comes from the game’s huge number of procedurally-generated weaponry and loot that can be found in abundance. 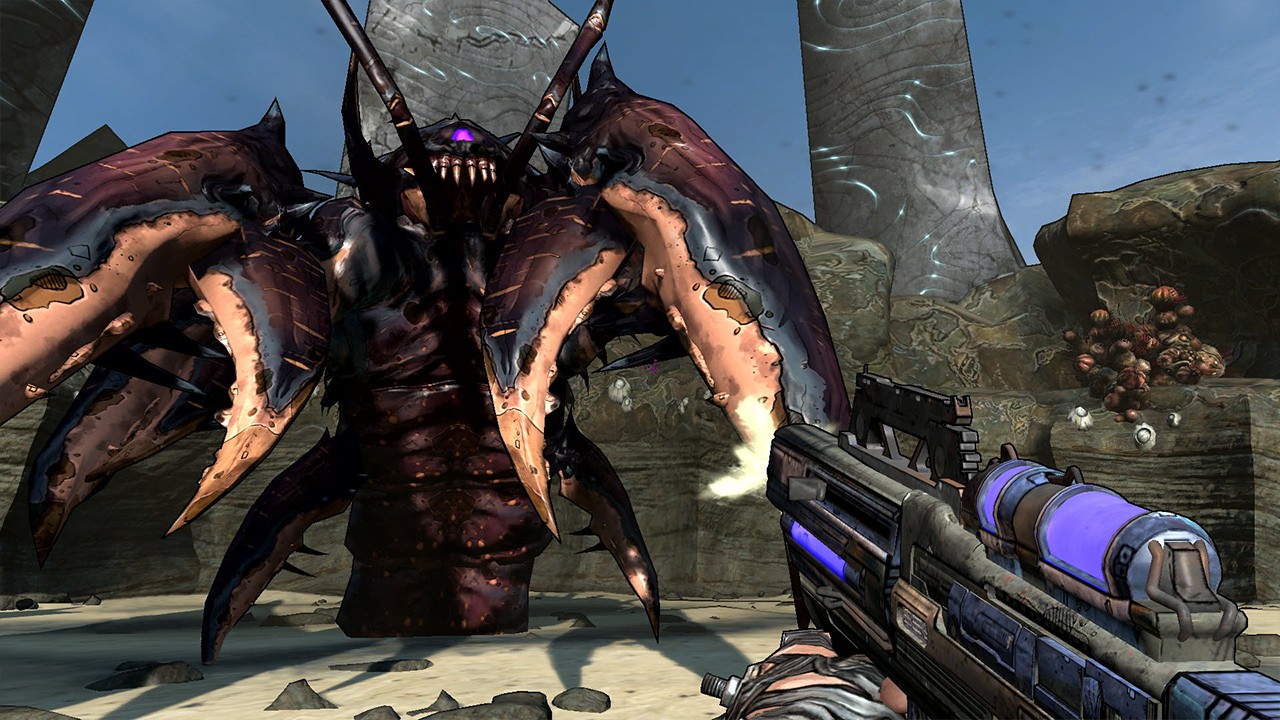 The whole presentation and look of the game is created with a cel-shaded aesthetic; something that was quite revolutionary when the game first released. Even now, eleven years after that release, the game still looks fantastic. Even in its overall gameplay, this title still plays a fantastic game, and even more so now, with this Nintendo Switch iteration. Although the series has seen a form of portability before on the PS Vita, it was seriously downgraded; although it still looked great for a hand-held device. Here, on the Switch, though it holds a much closer resemblance to its original style on the PS3 and Xbox 360. Everything is sharp and vibrant, particularly in hand-held and with a locked 30FPS, the movement and aiming mechanics just feel sublime.

This is largely due to the implementation of Gyro aiming mechanics, as well as a healthy splattering of aim assist as well. You really can feel quite masterful as you pull of critical headshots and long-ranged kills with relative ease. The general control scheme makes this an easily accessible game and it all just runs really smoothly, making this the best portable edition of its series to date. Everything remains intact here, even the minor annoyances of getting your vehicle stuck on a piece of scenery or a waypoint marker that isn’t necessarily accurate, but hey, this is Borderlands in all its glory and it just simply adds to the overall charm of the game. The developers have really done an amazing job in porting this over to the Switch; it’s been crafted to such an extent that, even though this is my third outing with this particular title, it still feels fresh and new and instantly playable. 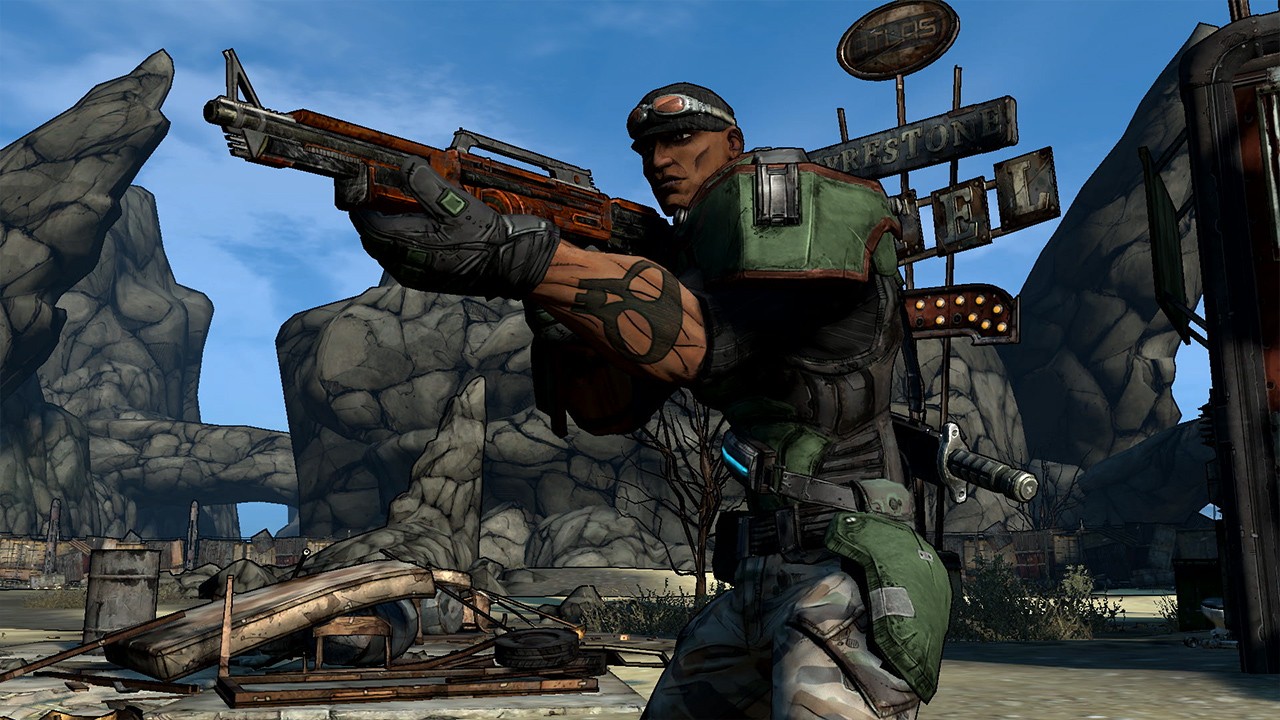 Being the Game of the Year edition, all previously released DLC also comes bundled, such as The Zombie Island of Dr. Ned, Mad Moxxi’s Underdome Riot, The Secret Armory of General Knox and Claptrap’s New Robot Revolution. All of this content can be accessed in-game; either as part of your playthrough or separately through the in-game’s fast travel system. This adds a whole level of extra content and bolsters the game’s, already substantial, campaign. As well as this, you can also play co-operatively for up to four players; both locally and online. Having tested both modes of play, the Switch does a great job of maintaining frame-rates; even with four players on split-screen on one console. The Switch version of the game also boasts some new weapons to play with and a few visual tweaks to boot.

There’s plenty of replay value too, with four characters classes that hold a variety of distinct abilities and play styles, as well as a number of difficulty levels and new game + to ensure its long-term appeal. Not that it really needs it, as this is a classic game that hasn’t lost any of its charm or appeal over time. If there’s one downside to the game, then it has to be its overall file size; even with the physical edition, you’re still looking at a hefty 7.7GB download; even more if you purchase the game as part of the Legendary Collection, also available for the Switch, which contains an extra 36GB on top of that. If you’re looking for the complete collection, you’re seriously going to need to get an SD card, although with this standalone title, you should just get away with the standard internal memory if you’re lucky.

Overall, Borderlands: Game of the Year Edition is the perfect game for the Nintendo Switch. Having the world of Pandora within your hands is just sublime, but what makes this title stand out even more, is that it has been ported faithfully with the most minimalistic of sacrifices, to such an extent, that you won’t even notice them. It looks crisp and beautiful and controls sublimely. With all of its DLC bundled in, as well as the option to play co-operatively both locally and online, this is a game that represents superb value for money. Even of you’ve played through it before, it still feels fresh and extremely playable on the Switch. If you’ve never sampled Borderlands before, then what are you waiting for? Pandora awaits my fellow vault hunters and upon the Nintendo Switch, plays and looks as good as it has ever done before.

Pandora awaits, fellow vault hunters, as Borderlands: Game of the Year Edition loots and shoots onto the Nintendo Switch.