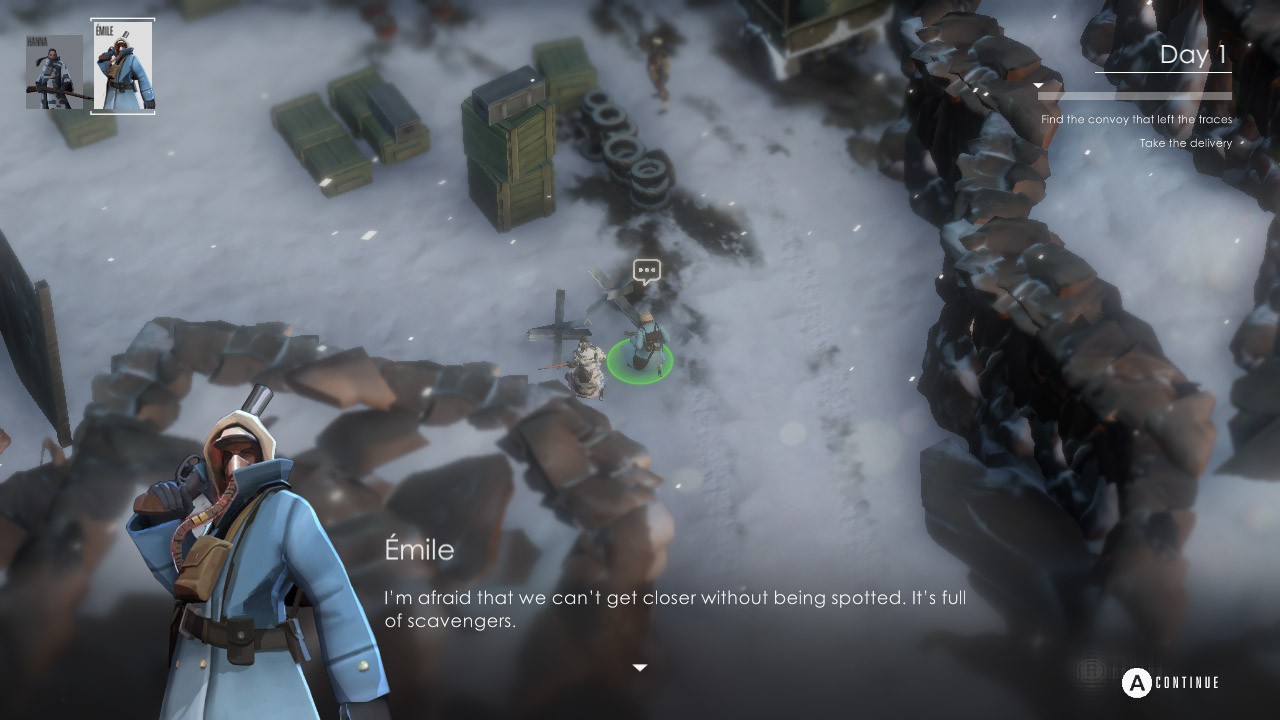 It’s quite easy to dismiss any turn-based tactical strategy game as an X-COM variant, but it’s a good benchmark to go by as much as Dark Souls is for ‘souls-like’ games. With that in mind, 1971 Project Helios is a fairly enjoyable standalone title worth playing on the Switch if you have the patience to stick it out.

That level of patience hasn’t got anything to do with frustrating controls (scratch that – we’ll come back to that) or glitchy graphics, more to do with the nature of this type of game where you have to gruel it out, with the aim of survival. While it’s not as in-depth as some of its peers, 1971 Project Helios offers solid gameplay, if a little repetitive and way too hard in areas.

You begin the game with two players, then gradually add a further six; giving you a choice of eight playable characters (playing up to four at a time), each with their perks. They’re a mixed bunch, each with their agendas and allegiances but join forces in the game to rescue a Dr Margaret Blythe – again, each has their reasoning for finding her, and as a result, there are three multiple endings to the game. The story isn’t anything exciting, and the dialogue can be a little rough around the edges. Still, the gameplay is enjoyable in an arcade-like manner, and perhaps not something PC users who are used to when they often have a multitude of features available. In the menu on 1971 Project Helios, you have a volume control, and that’s it. 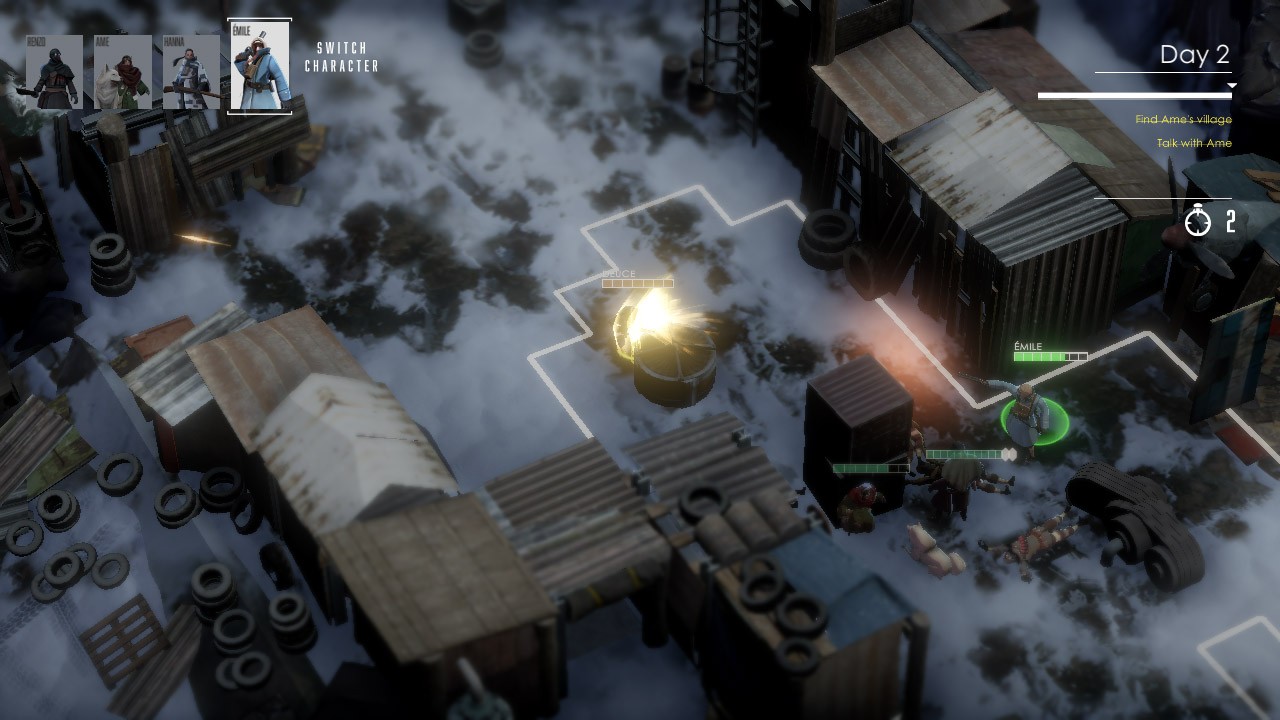 Depicted in a top-down view where you can use the right stick to move the camera about, the graphics aren’t so great on the Switch. Sure, you can see who’s who, but unless there’s a Konami Code for being able to zoom in, the visuals are a little weak. The dialogue sequences, all text-based, have the character who’s speaking represented as a visual novel type avatar and nicely drawn. I have the feeling that this would look more polished on another system. Still, it’s serviceable and moving around the maps is quite easy as between combat you can freely move your team leader with the rest to follow. When you walk into an ambush (where you can clearly see the enemies), the game switches to combat mode.

Combat is similar to most of these titles as you can select a variety of options from movement (the game is tile-based, so you can only move so many spaces), attack and a couple of character-specific abilities. Generally speaking, this is a cover-based title so you need to position your pawns in preparation for when the enemy will attack. Assuming the enemy will remain stationary, your cover is based on the direction they are facing and either provides 50% cover or 100%. You can attempt to shoot enemies when they are behind cover, but based on the above; it’s hit and miss – both with standard attacks and special abilities. However, when it comes to the AI’s turn, they are consistently able to take you out with their specials when behind 50% cover, and not once did they miss. This was one of the most frustrating things about the game.

There would be occasions where you’d enter a room, and though you get the first move every time, you’d usually have to go on the offensive and try to take out enemies one at a time as when it comes to their turn, they frequently target one player, often with a special ability as their first move. Lose your team member, and it’s game over. Thankfully, you can restart from the same battle as autosave is enabled. There are no stats to level up as such, nor any new weapons or health to collect or cast, but the latter health gauge returns to full capacity after a battle. Around the fourth level, you can choose your party, but up until then, you have to use those that are given to you. One particular character held me back – Domi, who is a grenadier who’ll fall over should a mouse fart, and his default attack is like throwing pennies. He kept getting killed (hiding behind 50% cover didn’t protect him), so I had to redo a couple of rounds until I got the Fulgor Tank. 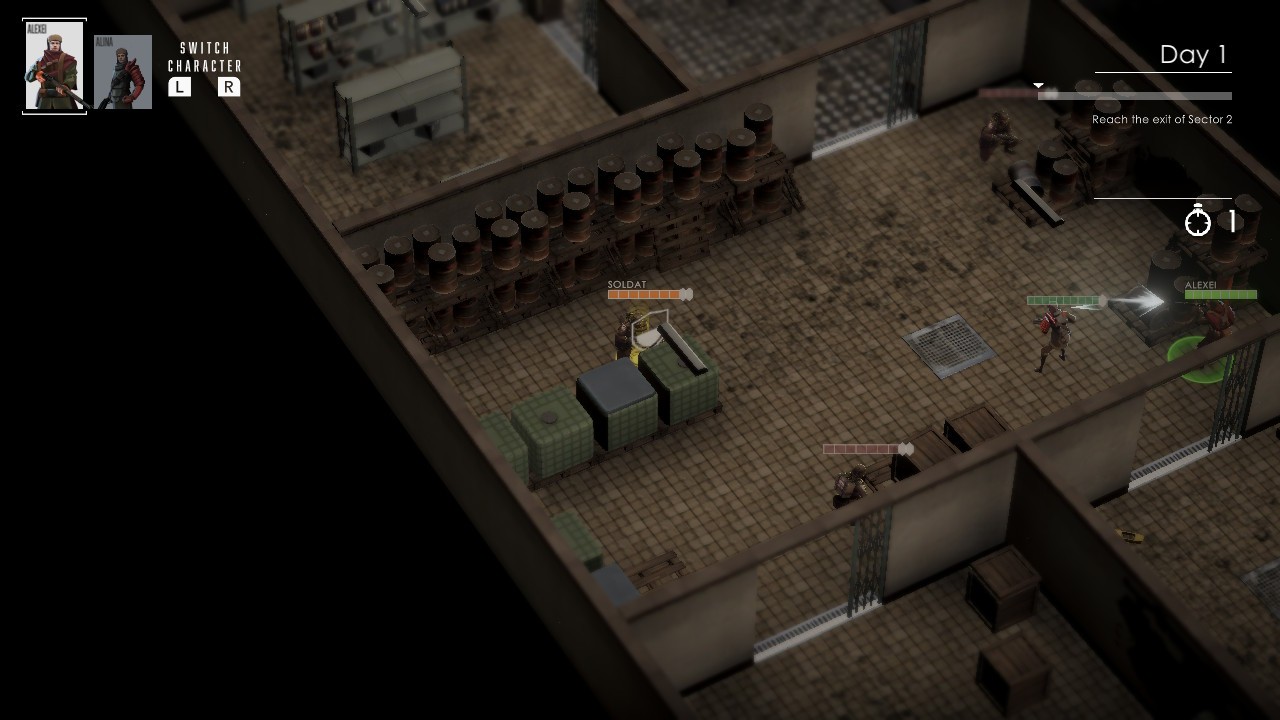 When the Fulgor Tank is first explained, I was thinking Metal Gear, and then when Domi says how small it was, I was wondering whether it was a toy. Fortunately, it’s a game-changer. The Fulgor Tank is a special you can activate up to a maximum of three times and can de-freeze players (some will take damage in the cold), speed up cooldowns and the best one, reanimate. With the latter, should Domi die, you can bring him back – but only once in a round. I’ve never had the opportunity to use the Fulgor Tank three times, despite what it says on the tin. Shortly after getting the tank, a skill tree was unlocked, but quite a stripped-down system as you choose one perk or another but need to find the particular item to attach first, such as a shoulder pad. Other characters can equip these, but only one at a time and it just meant that unlocking these perks meant scavenging for a lot of items.

I have to say that I found the button configuration quite counter-intuitive. I’m not sure whether this is just a personal thing or poor design, but you select a character with L or R and your actions with ZL or ZR. No matter how many hours I played, I couldn’t get the muscle memory for it and would attempt to complete an action, only to switch player. As it’s turn-based, you won’t die or run out of time, but there was something about the controls that felt a bit clumsy.

This was another issue as the items you locate – which includes notes that you can read back at base camp and occasionally unlock new dialogue – are hidden in the scenery. The notes are a little easier indoors, but when these items are only highlighted when you get close, and as there are no in-game achievements, it feels a little pointless collecting them all when it’s such a chore to find them. But, despite the visuals, scavenging for tat and the difficulty (there are no options to make it easier), 1971 Project Helios is still a fun game – really! Though I wouldn’t class it as an addictive game, I found myself blitzing quite a few levels at a time as was keen to see what would unfold next, considering the game doesn’t let you choose your team until later, then the skill tree – I was hoping for a little extra. While that didn’t really come, I did still enjoy the experience but feel that this may have been better on something like the PS4 with the improved graphics and incentives for unlocking trophies.

A stripped-down turn-based strategy game that is easy to pick up but the balance in AI difficulty that can’t be adjusted will prove a little trying for some. The skills tree needs a bit more depth, but if you want something a tiny bit more arcadey than its peers, 1971 Project Helios is worth a look.