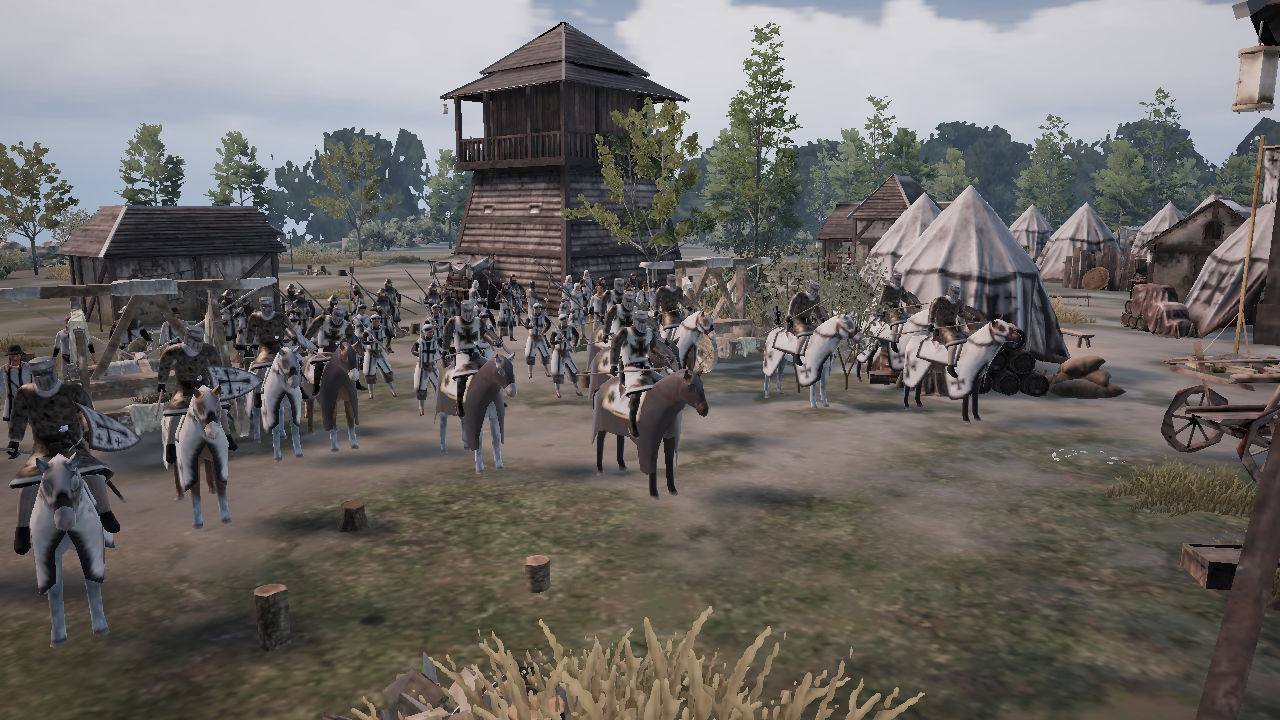 Over the past couple of years, the argument of whether an RTS game can be successfully ported to a console has since become redundant.  Long gone are the fears of overly-clunky controls and cumbersome text boxes clogging up the screen.  With the success of  Halo Wars and subsequent games such as Sid Meier’s Civilisation VI,  it seems the console has become as much a home for great RTS titles as the PC ever was.

With this thought in mind, we were particularly looking forward to getting our hands on Ancestors Legacy by Polish studio Destructive Creations (those of Hatred fame).   Following hard on the heels of the game’s success on the PS4 (read the review here), Destructive Creations has now decided to port the game over to Nintendo’s magic box of tricks.   But can the Switch, a console with just a handful of worthy RTS titles to its name, prove a worthy home for this tale of knights, Vikings and blood-soaked battles? Read on.

The first thing you’ll notice when firing up Ancestors Legacy on the Switch is just how similar it looks to its predecessors on the larger more powerful consoles.  During the first couple of days of our play-through, we ran both the Switch and Xbox One version side by side and the difference was negligible if not, in many cases, non-existent.

The premise of the game also remains the same.  You take control of one of four factions which all have their unique strengths and weaknesses.  The Vikings are great for pouring on infantrymen but are rubbish on horses, the English have excellent archers, the Germans are great on horseback and the Slavs have archers who ride horses.  As in many RTS titles, the basic gameplay is that of rock, paper, scissors.  To successfully complete a mission you must judge the best units to deploy in any given situation to counter your enemies strength in a particular area.  And, as well as choosing the composition of your army carefully, you’ll also have to take into account the terrain and whether you should deploy stealth (for example ambushing the enemy while hiding in long grass) or if whether a frontal attack is necessary. 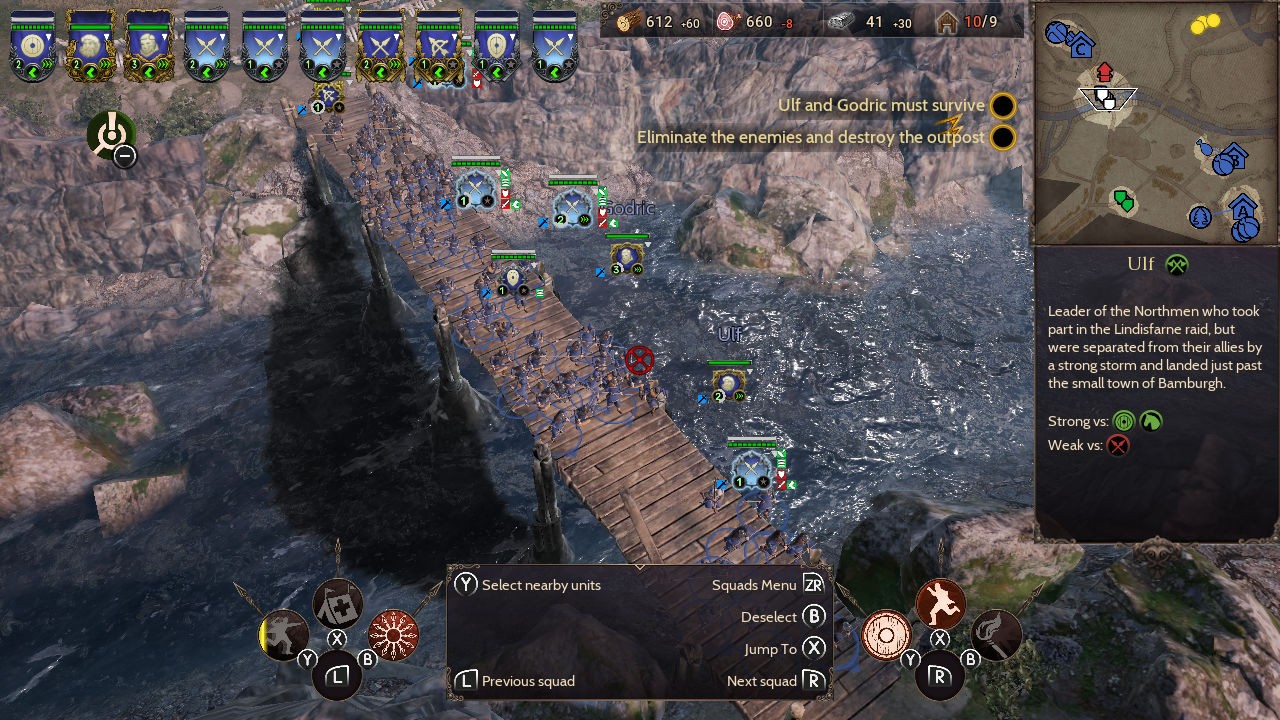 As Ancestors Legacy prides itself on being a realistic battle sim, Destructive Creations have also added an element of friendly fire into the mix to increase the sense of realism.  In practice this means, for example, if your archers are firing over the heads of your infantrymen to hit the enemy, there’s always the possibility that they’ll take out some of your men too.  As with previous incarnations of Ancestors Legacy, this friendly fire element could have been balanced with a withdraw option so you can send your men forward and then pull them back.  Sadly this element is still missing from the Switch port, and, once you’ve sent your troops into the fray, they’re committed until you lose or the enemy is vanquished.  It’s worth noting there is a retreat option available on Ancestors Legacy.  But this just sends your men scattering as far away as possible and offers little tactical advantage.

As a side note, Ancestors Legacy encourages you to keep your soldiers’ moral high.  Presumably, the lower their morale, the worse they perform on the battlefield. Sadly, this aspect of the game is never truly fleshed out and, after a few hours of game-time, I began to wonder how low morale could go and how this would affect my campaign.

Speaking of campaigns, Ancestors Legacy comes with some 30 campaign missions, as well as a skirmish mode where you get to pit your skills against the computer in a variety of simulations.

The early stages of the single-player campaign serve as glorified tutorials walking you through various aspects of the game.  Once you’ve completed the single-player missions you’ll then unlock other faction missions to sink your teeth into. A word of caution however; although the early campaign challenges are training missions, they can still prove pretty tough to master.  However, once you’ve mastered the basics here, the rest of the game is far more accessible and rewarding. 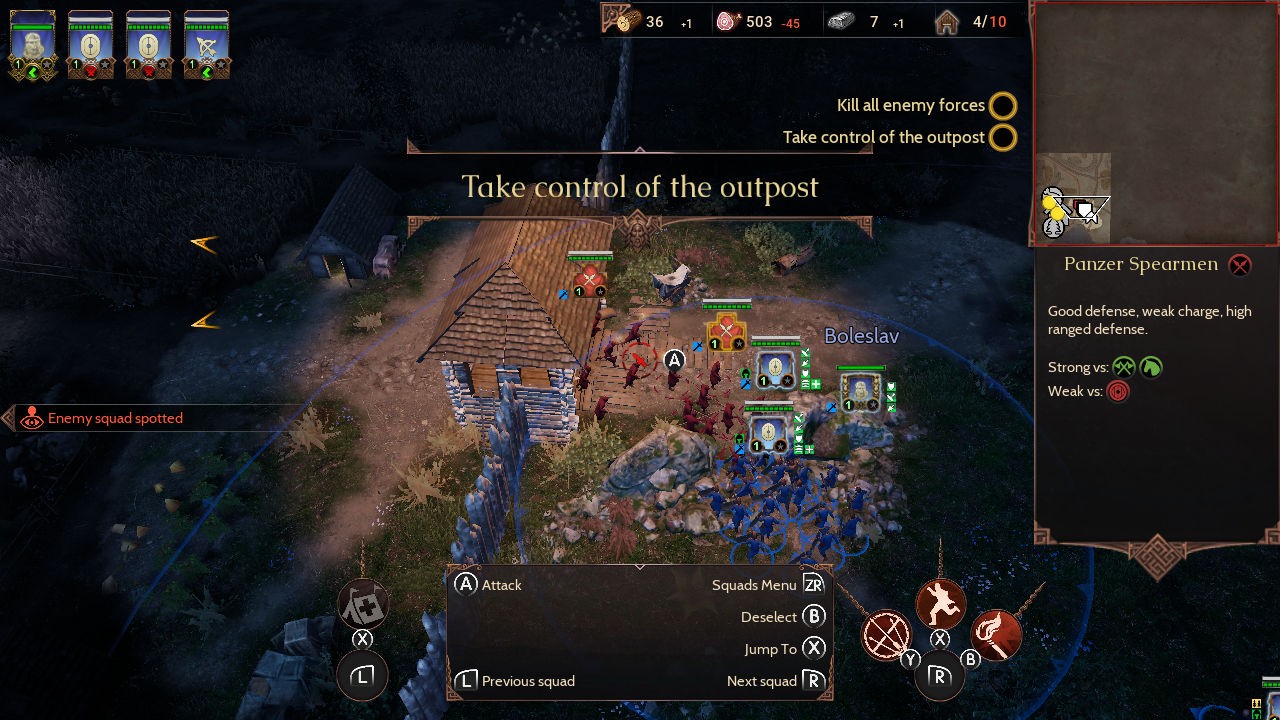 Looking at the screenshots of Ancestors Legacy you’ll be reminded of Age of Empires, the granddaddy of all truly excellent RTS offerings.  However, the basic difference is that Ancestors Legacy is a battle-focused title.  Yes, there are elements of base building and research.  But these are relatively minor aspects when compared to the focus on battle and attack/defence strategy.  As well as building from your own base you also have the option to take over enemy villages and put them to work producing resources for your army.

Control-wise, the developers have done an excellent job of porting Ancestors Legacy to the Switch.   The controls are intuitive and accessible and, to be honest, after a while you forget about them and concentrate on the game at hand.  Selecting a unit is a breeze by just pressing the ‘Y’ button. Double-tap Y and you can select all units at once. With the variety of units available, the Switch version of the game allows you to cycle through all available units with the L and R buttons.  And, should you lose sight of your chosen unit, simply pressing X will snap the screen to them wherever they are on the map. We also liked the fact that should you need to revitalise your army,  holding down L and pressing X will immediately set up a healing camp for your troops.

As we mentioned earlier, graphically, Ancestors Legacy on the Switch is easily on par with versions on the larger consoles.  The terrain is highly detailed and looks stunning.  Even from a high zoom position, your army of berserkers, Teutonic knights and pagan tribesmen is well animated and picking out individual units is an effortless challenge.   We would have liked to have had the opportunity to rotate the camera so we could see the battle from the enemy’s perspective.  But even without this very basic feature, Ancestors Legacy still looks pretty darn good.

The in-game audio is just as competent.  Some of the voice acting is a little wooden but, once you’re in the middle of a huge battle, the sound of metal on bone, the cries of the dying and wounded and arrows slicing through the air is nothing short of mesmerising.

If we had any niggles with Ancestors Legacy it’s with the odd decision to leave out any multiplayer element.  If there’s any game crying out for the chance to face off against your mates online, it has to be Ancestors Legacy.  The lack of multiplayer is a hugely wasted opportunity and one we hope the developers will redress in any forthcoming DLC.  Other than that, Ancestors Legacy is a challenging and immersive RTS title that will offer you some 10 – 15 hours of rewarding gameplay.  Highly recommended.

A challenging and immersive RTS title that will offer you some 10 – 15 hours of rewarding game play.