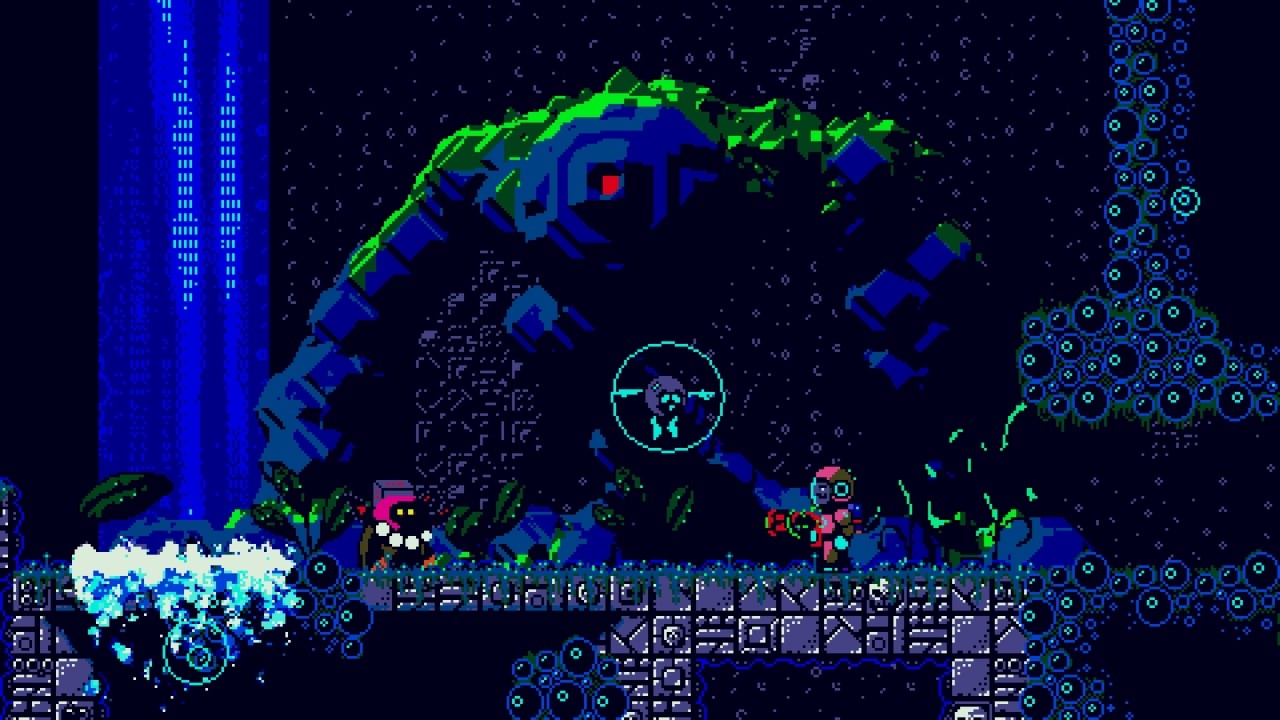 When a game becomes so popular that it comes its own genre, that’s when you know you’ve got something special on your hands. The term “metrovania” literally came about thanks to two amazing games that showcased the ideas of non-linear exploration, improving gameplay through character development and discovering secrets that might otherwise be unmarked. It’s a powerful, exciting sort of game that creates different fan subsets: those who look to fully unlock the game in long-form play, others who look how to cheat the system in order to succeed in the fastest time possible. As a result, a great metrovania will find purchase no matter what the background or premise, because the very nature of the formula is enough to get people hooked and coming back for more.

With Outbuddies DX, the concept and presentation alone are enough to get people in the door. Created by solo dev Julian Laufer, Outbuddies DX is the tale of Nikolay Bernstein, a sort of maritime archeologist who has the bad/good fortune of being caught in a catastrophic storm and dragged 36,000 feet below the surface. Rather than dying and this being a short indie game that cautions against Poseideon and his wrath, Nikolay awakens in some sort of sub-oceanic ruins that may or may not be the long-fabled city of Bahlam, which once belonged to the Old Gods. Oh yea, there are Old Gods here, and also a lost civilization called the Wozan, who live in unwilling servitude to the Old Gods for the last five thousand years. Part Metroid, part Cave Story and all pixel art, Outbuddies DX tasks Nikolay and the vital but very annoying Buddy unit he’s connected to discover the secrets of Bahlam, face the Old Gods in various forms and find some way for all concerned to make their way back to the surface. 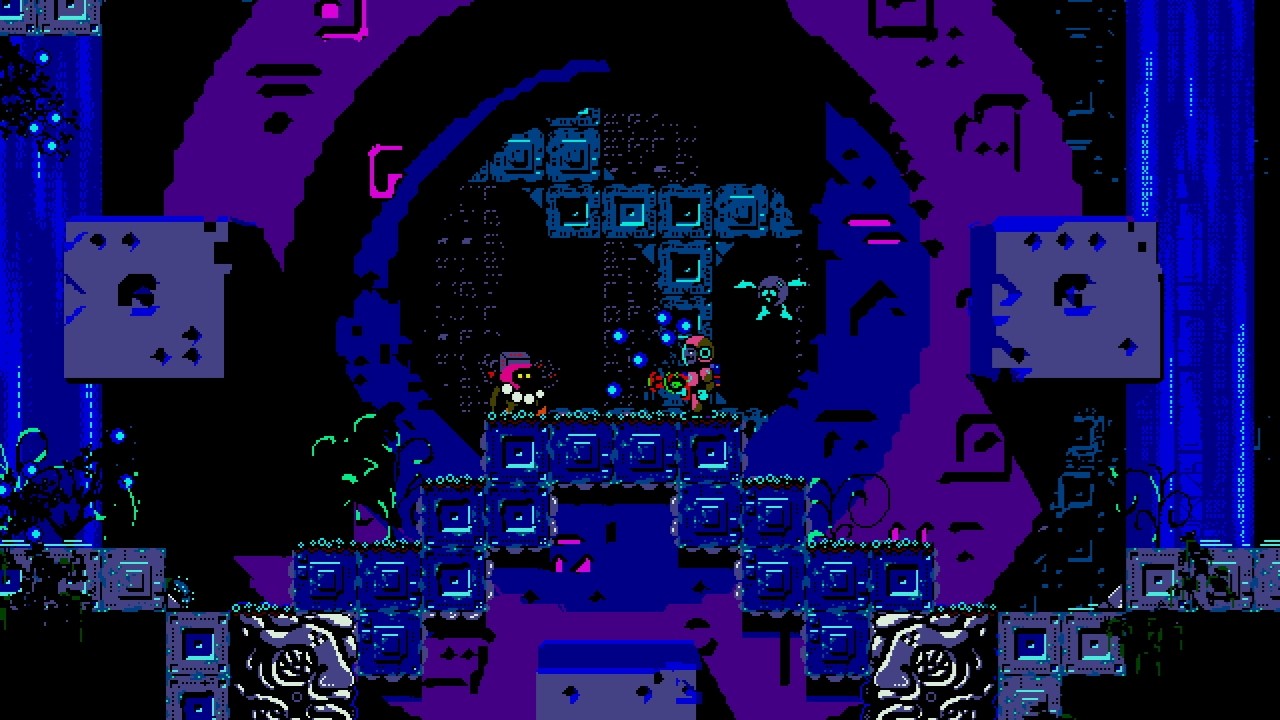 If I keep harping on the Metroid aspect of the “metrovania” that makes up Outbuddies DX’s genre, it’s because I thought I was playing Metroid the first time that I loaded this up. The pixel art aesthetic, combined with the dark shades and wonderfully alien landscape, took me straight back to the days of Justin Bailey and the aliens that Samus first encountered in that fabled first game. Outbuddies DX nails the visuals, giving players that proper sense of discovery and ominous threat without being purposely overbearing with tone or voice. There’s enough neon shot through to keep the planet from being overly grim and shadowy, but plenty of dark aspects to keep this more Blade Runner than Commander Keen.

This visual component continues with the boss fights, which are, if nothing else, positively imposing compared to the rest of the game. Having just come off a different title where the bosses I met were less than impressive, it was a delight to see the giant, abstract and frankly frightening denizens of Balham up close and personal. Nevermind that they were a terrible ordeal to fight: just to behold them was a testament of the game from the beginning. You know how you sometimes see a word of art someone created in MS Paint, and you can tell it was done in Paint but it still looks incredible, which then magnifies the feat? Those are the bosses of Outbuddies DX: borderline eldritch creations that have a certain “amateur” edge to them that makes their full presence even more grandiose.

Additionally, there is something rather clever in the way that Outbuddies DX handles itself in terms of engagement and expansion. Rather than have everything fall back onto Nikolay in terms of improvements and advancement, we also look to the Buddy unit to take over quite a bit of unique and special mechanics. For whatever reason, Buddy has this sort of telekinetic power that manifests itself in being able to detect certain abnormalities, move blocks from afar and basically construct pathways that allow Nikolay to move forward and progress with the game. Nikolay, not wanting to be a slouch himself, gets a fair number of great improvements to both his primary weapon and secondary weapon, as well as making this one of the first metrovanias I’ve ever played with a downright critical focus on dodge rolling. This mechanic, one that I really had to understand in Enter the Gungeon and haven’t been able to ignore since it is the bread and butter of Outbuddies DX in terms of survival. You use it to avoid getting shot, stepped on, burnt, melted and any other number of potential deaths in a game where the save and spawn points aren’t as plentiful as I’d like. You and dodge rolling are the biggest combinations of the game, and I’m saying that in a metrovania where you have a literal drone following you that does half the lifting for the game. 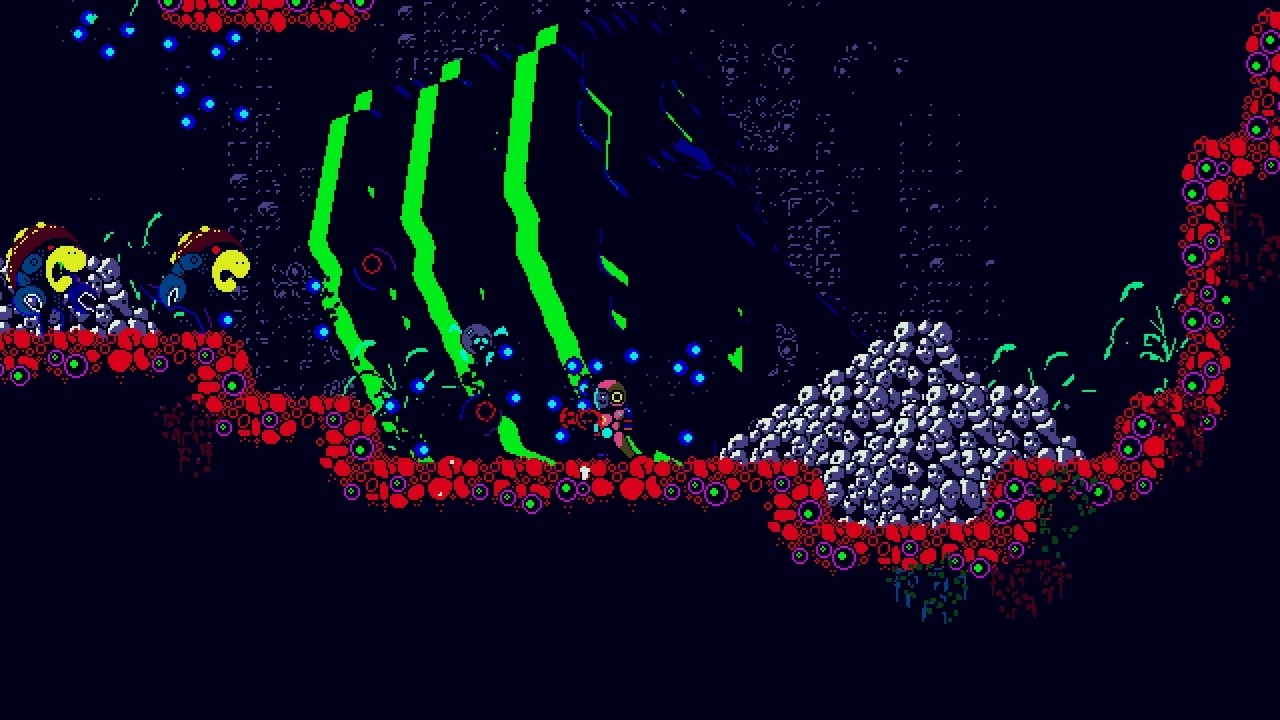 Outbuddies provides so much exploration and atmospheric presence that you almost get used to the controls. Almost. It was, in my opinion, a strange, almost haphazard choice to have Buddy slaved to the right control stick for activation, but still needing to use the left control stick to move him around, and there were plenty of times that I toggled Buddy on and off in an attempt to hurry up and move something. It’s probably a holdover from a QA session where it made more sense on another console, or perhaps the developer liked it particularly themselves, but it always felt a tad janky to me, which resulted in flubs, errors and a few times getting murdered while trying to move some blocks around in a time-sensitive area. Thankfully, the reliance on Buddy, while constant, isn’t the only meat that comes from this game, and so you seriously can overlook and forgive it 98% of the time. It’s that dreadful 2% where you’re wasting valuable seconds with fumbles that you become more anxious and, frankly, angry.

What really makes the game sing is the focus on balance, input and optimization. Outbuddies DX has been one of those fantastic titles where it was a passion project from the dev and the critique and feedback from the community helped to shape it and make it even better. There isn’t an upgrade that feels out of place, a pathway that feels dead-end or worthless, and the whole experience installs tiny and runs flawlessly. In a world where you can’t even trust AAA developers to get their projects to be smooth in docked mode, Outbuddies DX’s pixel art style and carefully calculated pathways have zero snags in handheld mode, adding to the flavor and realm that you get to experience. Bosses can take up multiple screens, and yet you can fall up and down through waves of energy blasts without watching the framerate drop before your eyes. It doesn’t just feel like a classic Nintendo experience: it feels like a development team taking a wonderful idea that they couldn’t quite get right years ago and finally bringing it to life in the modern era. It’s the thought of a dream that was too big to capture on the 16-bit stage, so we waited until the technology had caught up with the imagination to finally deliver the best end result.

Outbuddies DX is certainly not the title I was counting on seeing this June, but it’s the one that I’m pleasantly surprised to have found. When everyone complains about the influx of no-name indie games onto the Switch, this certainly stands apart, proudly, as a honed, crafted and fleshed out idea that can only get better, if it needs to at all. Grab a friend and try it co-op, or delve into the depths alone: it’s time to meet the Old Gods.

A modern retro classic, Outbuddies DX offers a chance for solo or co-op exploration of a pixel-perfect alien world.