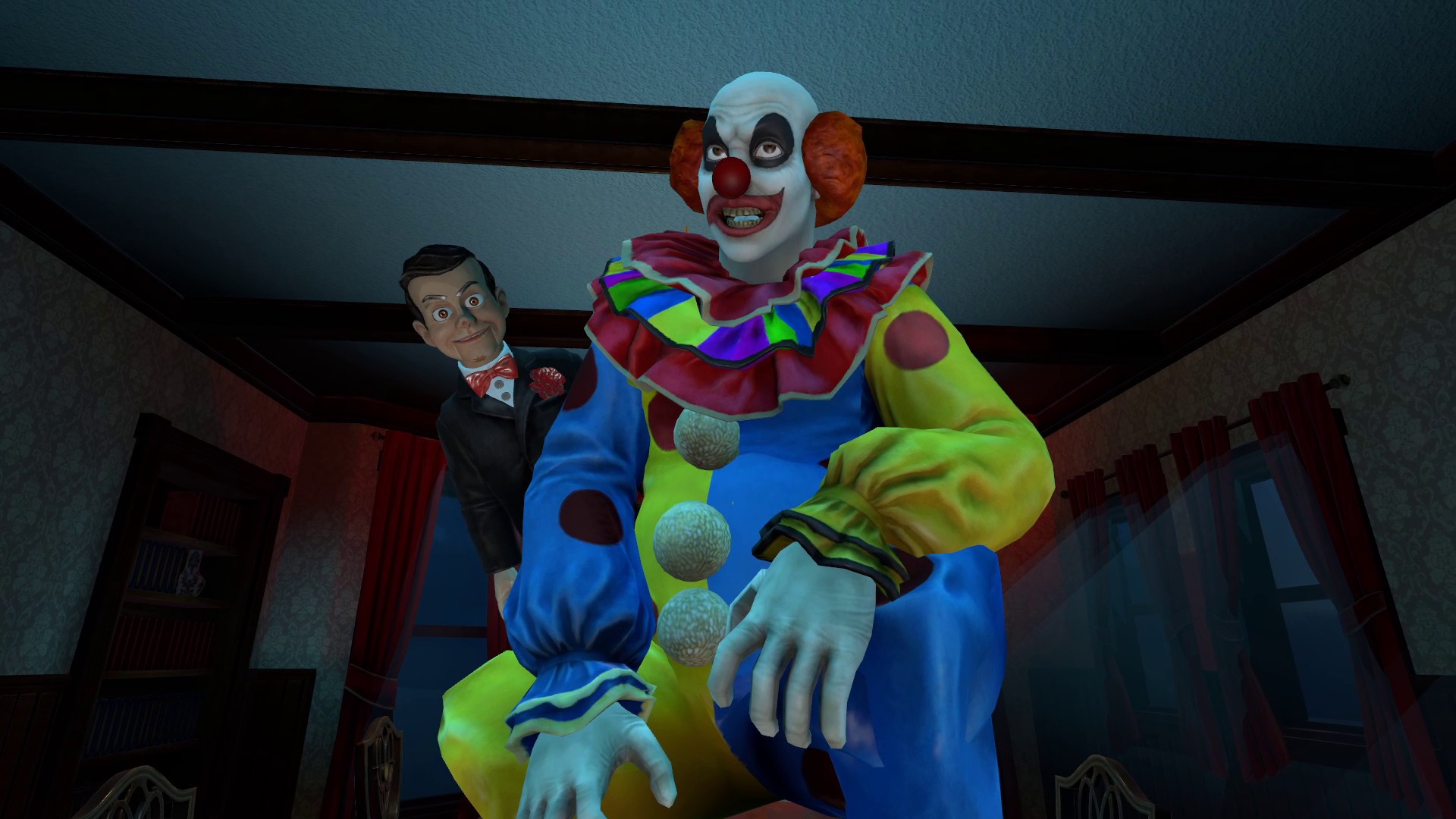 The horror genre is generally reserved for an adult audience, after all, we don’t want to be responsible for petrifying our children, and scarring them for life. A number of authors have created safe, yet horrific horror novels aimed specifically at children, and one of these writers is R L Stine. The creator of the Goosebumps novels has instilled fear into both adults and children since 1992, his books have sold over 350 million copies worldwide. So it comes as no surprise to me that the franchise has cashed in with several films, and no less than 7 video games. The latest of these games is Goosebumps Dead of Night, which has been developed and published by Cosmic Forces. This horror title is set over 3 chapters, you must overcome the mischief caused by the demonic doll Slappy, and return him back into the pages of his book whence he came.

The story opens in R L Stine’s study. A spell has been cast, and he has been tricked into being absorbed by his typewriter. Totally absurd, I know, but, probably no crazier than having an evil doll named Slappy, who distinctly looks like comedian Jimmy Carr, running wild and wielding dark magic. You control Twist, he randomly appears in the house and is asked to complete a number of tasks that will eventually lead to Slappy being captured and returned to his novel. As you explore this creepy old home, you will come across discarded and partially destroyed books. That evil doll really has made a nuisance of himself, and he has used his magic to unleash the horrific monsters that plague Stine’s plots. Your quest to incarcerate Slappy has now got a lot harder, as you will have to avoid; A Graveyard Ghoul, The Werewolf of Fever Swamp, Lawn Gnomes, and a personal favourite foe, The Murder Clown. Oh, I despise clowns, and this was probably the most terrifying and disturbing part of the whole title. His squeaky shoes shuffling along the wooden floorboards, and his painted face lunging towards your own as you hid. I’m going to have nightmares for months! Anyway, now I have that off my chest, let’s get on with this review.

Each of the chapters has their own style, and characters. The developers have created a number of stories within the main tale, and this allows them the freedom to flit between storylines without it conflicting with the main plot. The first of the three focuses on old school scares, and all the horror elements of this title. The second is set in a greenhouse, where Slappy has decided to curse you by turning you into a tree. You must gather the ingredients to create a cure, and prevent your transformation to plant form from becoming permanent. It has a distinct scientific feel, with some basic adventuring and puzzles to overcome. Finally, the third chapter is set in Nikola Tesla’s factory. You must solve a range of different puzzles to connect up the electricity, to unlock an electric pistol. This is then used to help take down that menace of a Doll once and for all. You will encounter a variety of different enemies in this section, ranging from; Giant Gummybear sweets, flying witches, and finally Frankenstein’s monster-like beasts. Unlike in the first chapter, you have the ability to attack these monstrosities. So it’s all-out shooting, you know what they say, attack is the best form of defence.

Once you have worked through all the chapters, you will come face to face with Slappy. Here you must use all that you have learned to defeat him, and set the world right. All the battles that you will encounter are pretty straightforward, there aren’t really any concerns about being victorious. Even when you are being chased down the halls of Stine’s house, you have very little to worry about. Your main concern is to desperately find a hiding place, but you’ll find that these are located in every room, so your sanctuary is never too far away. I have the distinct feeling that Cosmic Forces have aimed this title at a younger audience. Don’t get me wrong, as an adult playing it, it was immensely fun, it just wasn’t that challenging, this would be a fantastic title to play as a family for a gaming night. It contains nothing that can be deemed offensive, the cartoon violence is lighthearted and is nothing to be concerned about. 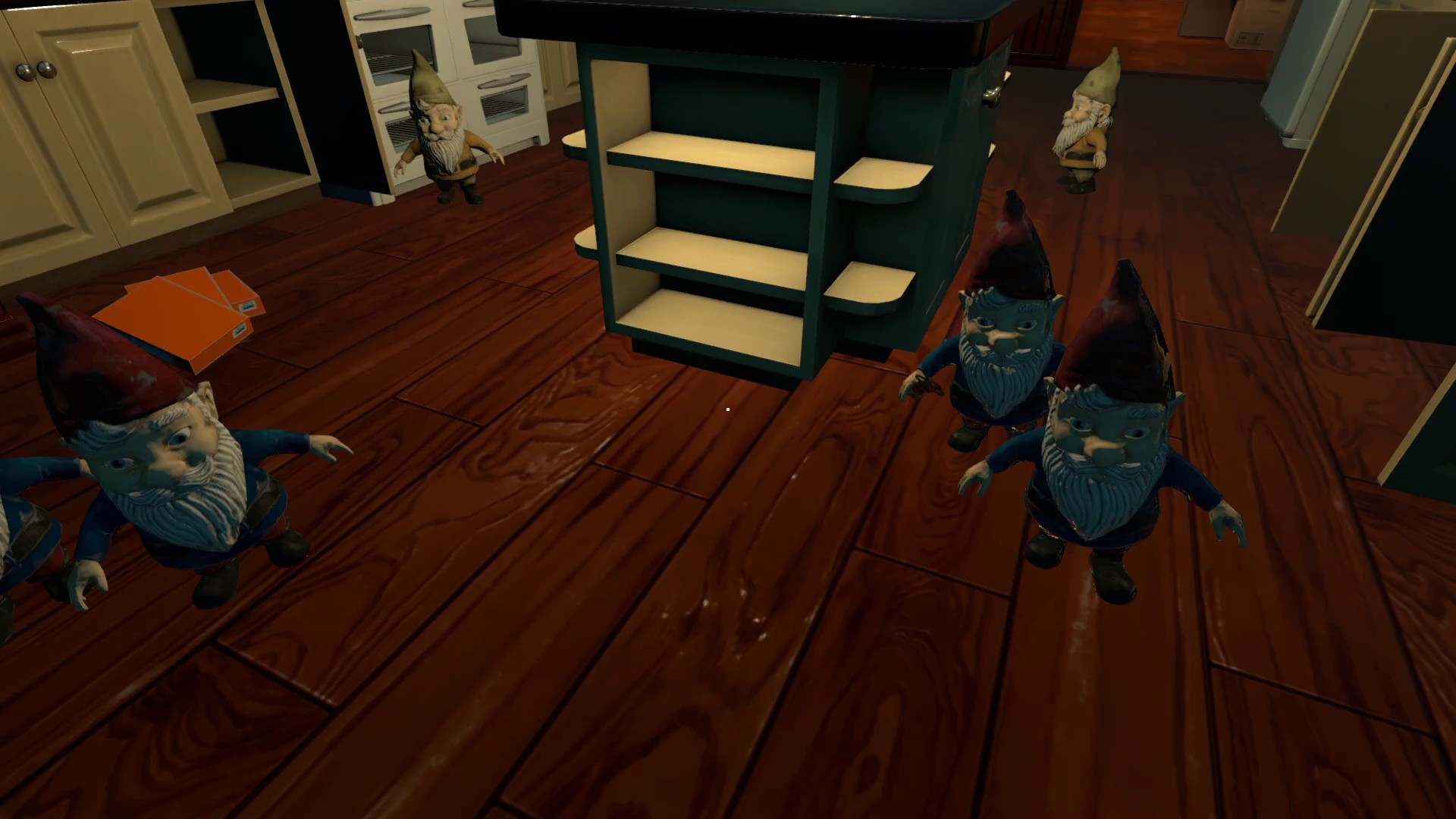 What this title does well, is to stay true to the feel of the franchise. Stine is still eccentric, Slappy is evil and twisted, and the creatures are fun yet send a shiver down your spine. What I felt that this game lacks, is an exploration into each of the character’s background. It would have been nice to have a number of mini-games involving each of the beasts, this would have allowed the player to catch a glimpse of each of the worlds they had been created for and would have increased the game’s longevity exponentially.

Playing out in a first-person perspective, you are limited to what you can see. This really adds tension and worked particularly well in the first chapter. I really liked how the screen shook, and the viewing window reduced when you were scared. Hiding in a closet, or under a bed was a worrying experience. You can see the monsters approaching, but you are stuck in your secret location, you sit there hoping that you are not found. I jumped a number of times, and there was one occasion when the Murder Clown caught me, I admit it, I squealed with fear. My controller was thrown about 4 metres across the room, a natural instinct that saw my controller in pieces, and the game finished, darn you evil clown, darn you! The cartoon style worked well with the theme, the models are particularly well-drawn, and the colour palette is varied. The vivid colours used in chapters 2 and 3 emphasised the scientific nature of those levels, whereas the first stage was a darker, more imposing affair, which only served to create a feeling of fear.

The phrase less is more is exactly how the developers have approached the audio. The use of silence, and the thumping of footsteps, creates an eerie feeling. Doors creak and the monsters have a distinctive sound which helps to identify who is chasing you. When the music does sound, it is a mixture of minor tones which suitably add to the atmosphere or an oddly creepy tune which only serves to capture the madness of both Stine and Slappy. Each chapter has its own unique narrator, they talk you through the action as if they are reading the plot of the novel which is currently taking place. They all have their own styles, and each will make you laugh one way or another. For me, the audio was probably the stand out element of this title. 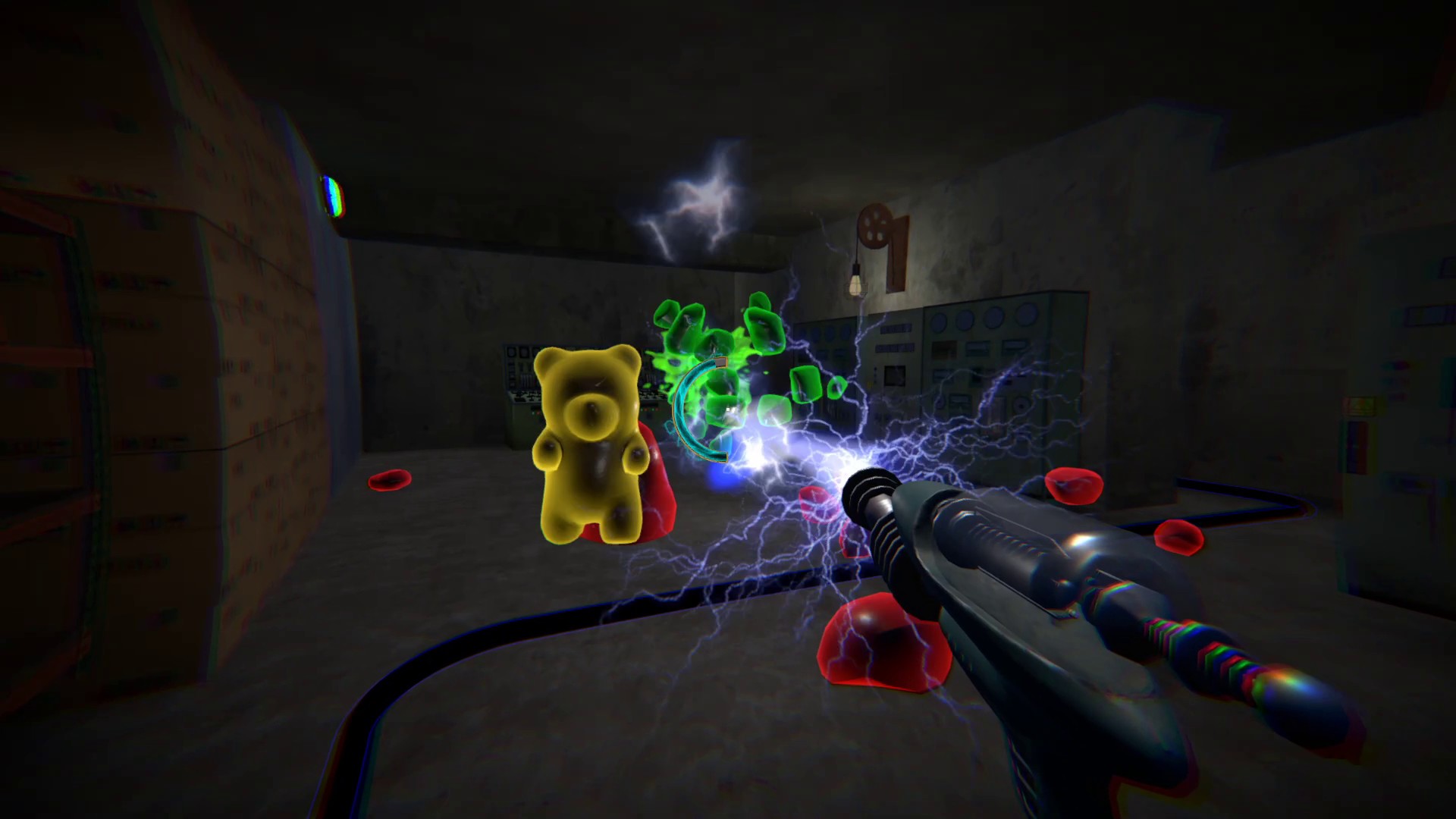 The controls reflect my opinion that this has been aimed at a younger audience, as they really are simple to pick up and master. When you are searching for the pages of the damaged book the controller vibrates, making it very easy to identify your objective. All the actions are reduced to a couple of button presses, and the only really difficult thing is ensuring that you don’t exhaust your stamina when running. This simple approach made it much easier to just play the game, and enjoy the plot and the scares. I’d feel comfortable leaving my children playing it without the fear of a question every minute about how they were going to achieve a certain task.

With only 3 chapters, one game mode, and little to come back to once you’ve finished the game, would it be fair to say that there is little to no replay value? The answer would be yes, that would be a fair statement. I’ve already mentioned the lack of back story or mini-games for each of the monsters you cross paths with, but there is also a distinct lack of depth within each level. What you do get to experience is fun, but you are left wanting more. Stine spends his whole time in the typewriter, it would have been nice to be able to see life from his perspective, and perhaps even break him free of his curse. Playing as Slappy would have also been an option available to the developers, and both of these would have enhanced the game vastly. I know that this is a solo title, but Cosmic Forces could have created a 1 Vs 4 hide and seek style minigame where you could select from all the different worlds mentioned, and each of the characters seen. With the majority of the achievements being unlocked through your first playthrough, and maybe some missable ones being mopped up after, you are looking at around 3 hours maximum for 100% completion, and that is me being quite generous.

Though I enjoyed my time playing Goosebumps Dead of Night, it wasn’t in-depth enough to push me to want to return to play it. Each of the levels were unusual and fun to explore, as were the beasts from the books. Slappy was brilliantly evil and played his part as the pantomime villain perfectly. For a younger audience, I think this will be a bit more of a challenge. It will probably last more than the 3 hours it took me to complete, as they will likely spend more time running for their lives from the Werewolf. Perhaps they will even like being scared by the clown, though I very much doubt that. If you are an adult gamer and looking to get this for yourself, then you will have to be prepared for the ease of completion, and that the scares really don’t compare with some serious horror titles on the market. Would I recommend it? It’s a tough one, I really did like it, but it just didn’t push itself enough for my liking. If you are a gamer mum or dad, then yes, I’d say it would be a fun title to play together, and you should certainly make room for it in your gaming library. It’s time to gather the pages of that book and end Slappy’s night of terror.

When Slappy escapes the confines of his story, and goes on a rampage, it takes an unknown hero to stop him. Step forward Twist, collect the pages of the book, and send him back whence he came.