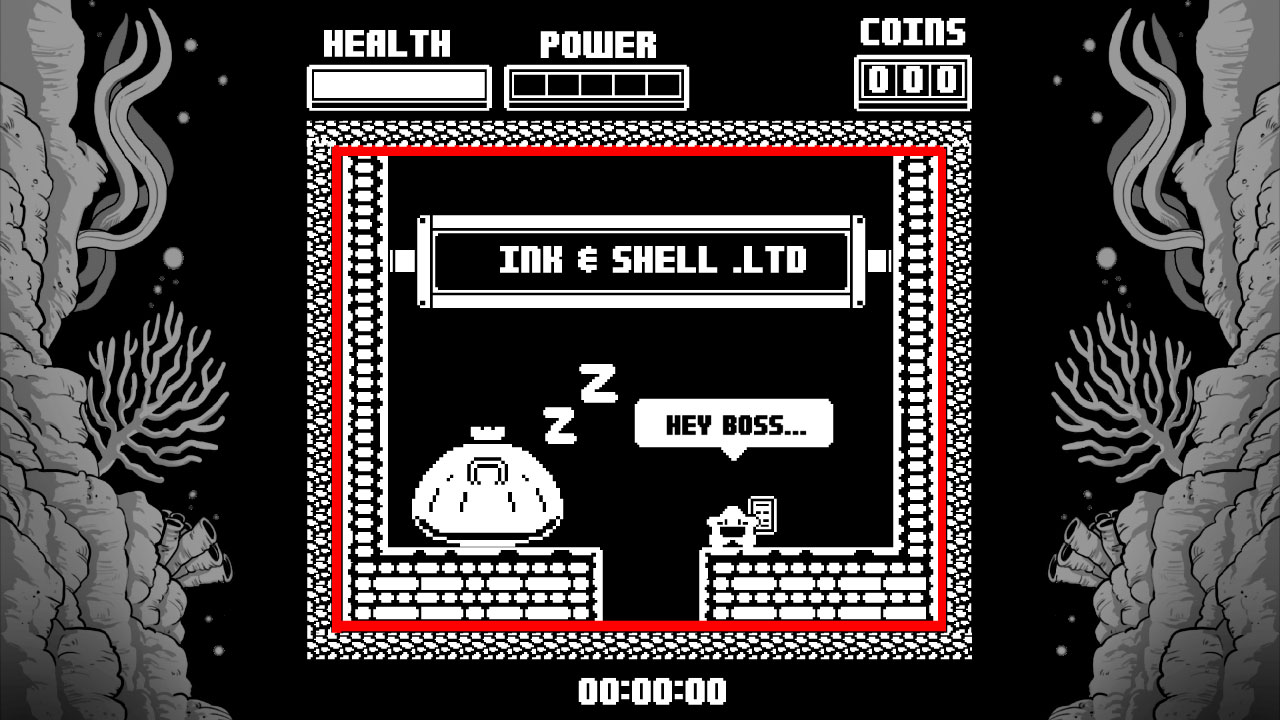 At this point, I think I’ve proven that I don’t mind going to bat for the smaller, less spectacular games. And I don’t just mean games that don’t have AAA graphics: it only takes having eyes and a brain to see that developers have created some truly spectacular works over the last few years that rely very little on massive resources for design or a huge team that specializes in making hyper realistic sprites. What I mean is, games that might normally fly under the radar sometimes fall into my lap, and it’s a joy to find out what makes them shine regardless of any caveats that come along with the experience. Sure, maybe this is the eighth time this game has been remade, or maybe it was a huge hit on Android phones prior to being on the Nintendo Switch. So what? A good game is a good game no matter where it hangs its hat. If you enjoy the Switch, the Playstation, the Xbox or are strictly a smartphone gamer, whatever, enjoy, do your best and have a great time.

Radio Squid is a tiny game from a nifty studio called Pixel Teriyaki, and comes to us from the little publishing label that could, Ratalaika Games. Looking at Radio Squid, I got very excited from the drop. Firstly, the images within the thumbnail and the screenshots give me a very Downwell vibe, a personal favorite game that I own on three separate devices. And that is an accurate part of the game: for the duration of this arguably short game, you’re treated to some very nicely crafted, black-and-white-and-red sprites that pop well in the smaller box screen that makes up the game field. It’s a fairly gorgeous layout, choosing to crop the game into a constrained play area that allows for the pixel-perfect enemies, bosses and shot particles to look their best while being set against some spiffy borders that add to the atmosphere. It does keep you in the under-the-sea mentality, which, well, it’s a squid, so that all works. Plus, if you enjoy doing some color palette swaps, go nuts and enjoy some of the great potential mix and matches that the developers have made available. 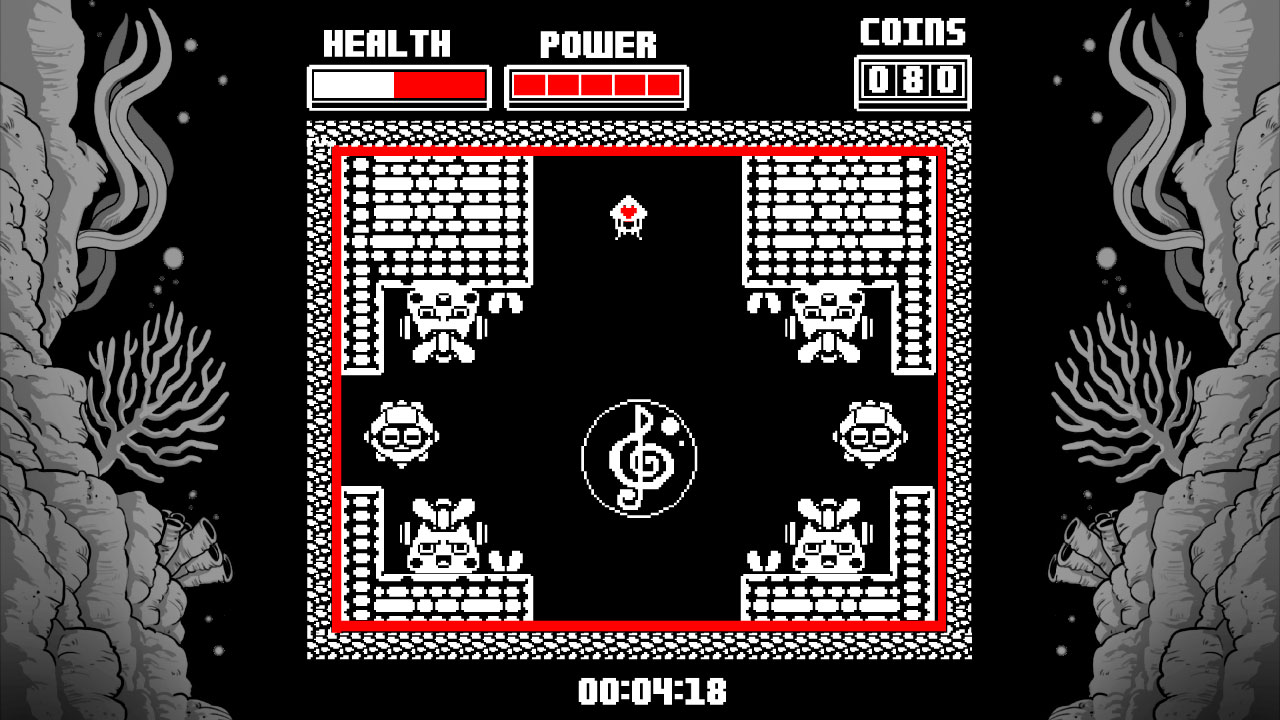 The way that Radio Squid plays out is an oddball sort of storyline, but not the worst thing I’ve ever seen. You see, this ambitious little squid is working with some kind of digging project to try and find the fabled Siren’s Song, and I guess I’m confused because the squid is the foreman? It’s not totally clear: you’re asleep within a giant clamshell, then you get woken up to go investigate the excavation, and they’ve discovered the Siren’s Song, which doesn’t sit well with the powerful denizens of the deep The squid now must undergo several tunnels worth of exploration and fighting in order to appease the Siren’s Song, which means beating a bunch of bosses that crop up after four stages worth of normal fighting and explanation. The whole game can be accomplished in little more than an hour, potentially less if you can get over the way the game works, which we’ll cover in a moment.

Also, as you might have guessed from the name, Radio Squid is focusing on the musical aspect of things, and the soundtrack is a banger. You’ve got this ever-changing, varied soundtrack of different variants on the chiptune approach, from more poppy and recognizable sorts of video game emulation to a different, melodic arrangement that gives me lo-fidelity vibes. The soundtrack has plenty of different ranges and specialties, and it makes the Squid journey one worth paying, almost mandatorily so, with a good set of headphones or a decent sound system on your television. The soundtrack hooked me, keeping me bumping along with the beat as I swam and shot my way through the game, and I honestly wish there had been a mode to simply listen to the soundtrack separately. At the current time, there’s no place to obtain the tunes online, so I hope Pixel Teriyaki considers doing a Bandcamp release or something to that effect because I’d totally dive into that. It’s got a good groove atmosphere to it, letting players concentrate on things beyond just the game, and it might be a great writing or studying soundtrack.

Now, as for the gameplay itself…Radio Squid is lacking. I mean, severely and utterly lacking. You ultimately have two controls: move and shoot. Only the shooting is an automatic thing, so you really just get to decide which way you’re shooting: you cannot control the speed or bullet density in any way whatsoever. You also have the A button to interact with things and the mysterious R button which somehow affects your shot power. I say mysterious because, maybe I missed something in the warmup, but I didn’t really see how the hell it did anything other than decreasing my power meter. As you enter each room of an area, you can’t start shooting till you pick up this massive, floating musical note that appears, and grabbing that musical note will increase your power if you have an empty slot on the power meter. So if you push the R button, you discharge one of those power slots, and I guess it makes you weaker, which is…great? It doesn’t recharge your health, it doesn’t do a room-damaging effect to enemies, and it doesn’t penalize you if your power is full and you pick up another, so what the heck is the purpose of weakening your weapon? Unless…it’s to make sure you don’t kill yourself too fast. 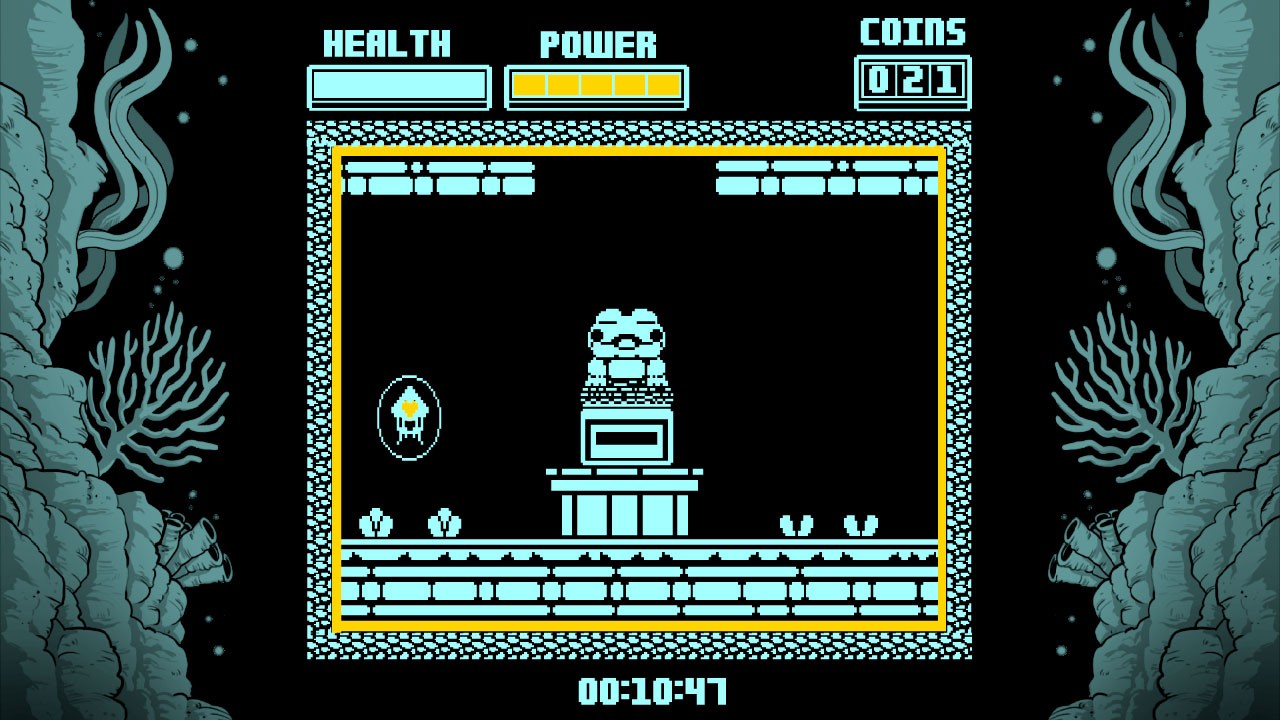 Radio Squid is affected by his own weapons. This wouldn’t be a problem, except your shots have an incredibly long life and can and will bounce around the room if not impeded by an enemy. So let’s say you’re facing one of the anemone enemies that you encounter from the very beginning. They take three shots to go down, theoretically. However, if you’re still facing the anemone and fire off a fourth shot (which is bound to happen, as shooting is automatic), you’ve now just released an extra projectile that messes you up because it won’t change trajectory and hit other enemies, nor do most enemies have erratic flight patterns and might happen to sail into it. Your only hope is to either be precision perfect and not waste a shot (again, AUTOMATIC SHOOTING), or to be really agile and never run into your own reflected shots, while also waiting out the enemy’s own shots, which can fire in a variety of directions depending on the enemy. Unintentionally, Radio Squid becomes a low caliber bullet hell game without a hell component, more like a Heck.

What kind of kills me about the whole thing is that there’s this huge focus on music throughout, right? The title of the game is Radio Squid, the soundtrack is killer, you’re dealing with the curse of the Siren’s Song, etc. It’s musically themed throughout. But the automatic shooting and such has nothing to do with rhythm. Nothing. You don’t need to be on your game by matching beats with your shots or your targeting. Hell, you can absolutely play this game in silence and do approximately as well as you would with the sound going, just with the caveat of not enjoying the most enjoyable thing about the game. You coast around, you pick up coins so that you can revive yourself when you die (and possibly a bit more), and just make it work. So when you finally get through those first few screens of choice direction that don’t mean anything and get to the first boss, you don’t need to now figure out some special musical ideology in order to defeat them unscathed. You just need to watch their attack patterns for a second, understand the bullet density, and slip through the streams while firing back, taking care not to shoot yourself. When the boss changes form, you have to mix things up by…watching for a second, figuring out the pattern and firing back. It’s later, rinse, repeat, with the added complication of trying not to get shampoo in your own eye because you’re constantly squeezing the bottle. YOU are the most dangerous thing to yourself, and it’s utterly frustrating.

Radio Squid is one of those few games where everything but the game is enjoyable. The graphics are delightful and quite endearing, the soundtrack is a daily driver if it wanted to be, and the story is silly but the characters make it work. Yet playing through the actual game and needing to toe the line between frustration and boredom turned it into a chore. Yes, it’s not terrifically expensive, but you can probably find someone on the street to punch you in the stomach for five bucks while wearing a tutu. The tutu is funny and it’s a story to tell, but why the hell did you want your stomach punched? If you really want to add something aurally pleasing to your Switch, go for it, but there just seems to be better things to do with your time.

Great as a visual and auditory stimulant, not so much as a “video game.”