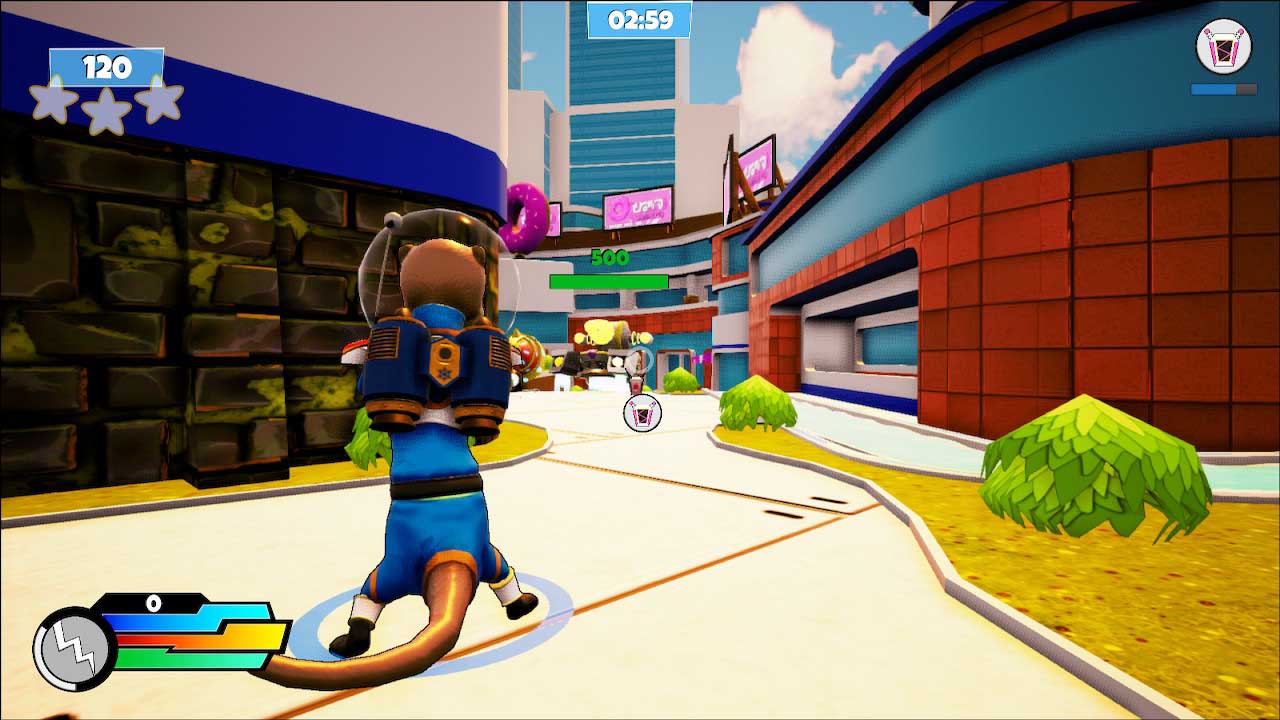 Initially, I was keen to play The Otterman Empire after seeing the videos and images of it on social media, which gave the impression of a high quality game, with a great story and engaging split-screen multiplayer gameplay. However, when the game released, and I got to play it, I was left with a feeling that it was missing something crucial. So let’s discuss this arena shooter game, published and developed by Tri-Heart Interactive, which got me so hyped but took all my expectations and drowned them in disappointment.

The Otterman Empire‘s story is told through muted cutscenes. The plot revolves around the game’s villain, Major Tiko, endangering your colony of diverse species, spreading chaos using his technology. I got the impression that the story was just an afterthought, included just so the developer could say “here’s a plot”. The game characters didn’t seem to have a backstory, or in fact any personality at all, and you’re introduced to the game via a tutorial and a list of very simple and unnatural tasks and to do.

All the weapons and jetpacks are water-based, so you are required to dive into water streams found within scenarios in order to refill your equipment’s ammunition. There are also some helpful kits floating on the ground during the matches that are used to replenish your health and weapon’s ammo. The game’s combat mechanics are incredibly simple and basically consist of running, shooting your gun, activating your special ability and using your jetpack to fly.

The game contains a total of eight worlds, each with three stages, resulting in a total of 24 stages. You can play the entire campaign alone, or with up to three friends in local split-screen mode, which is good, but it’s much more difficult to find players than in online multiplayer – even more nowadays. 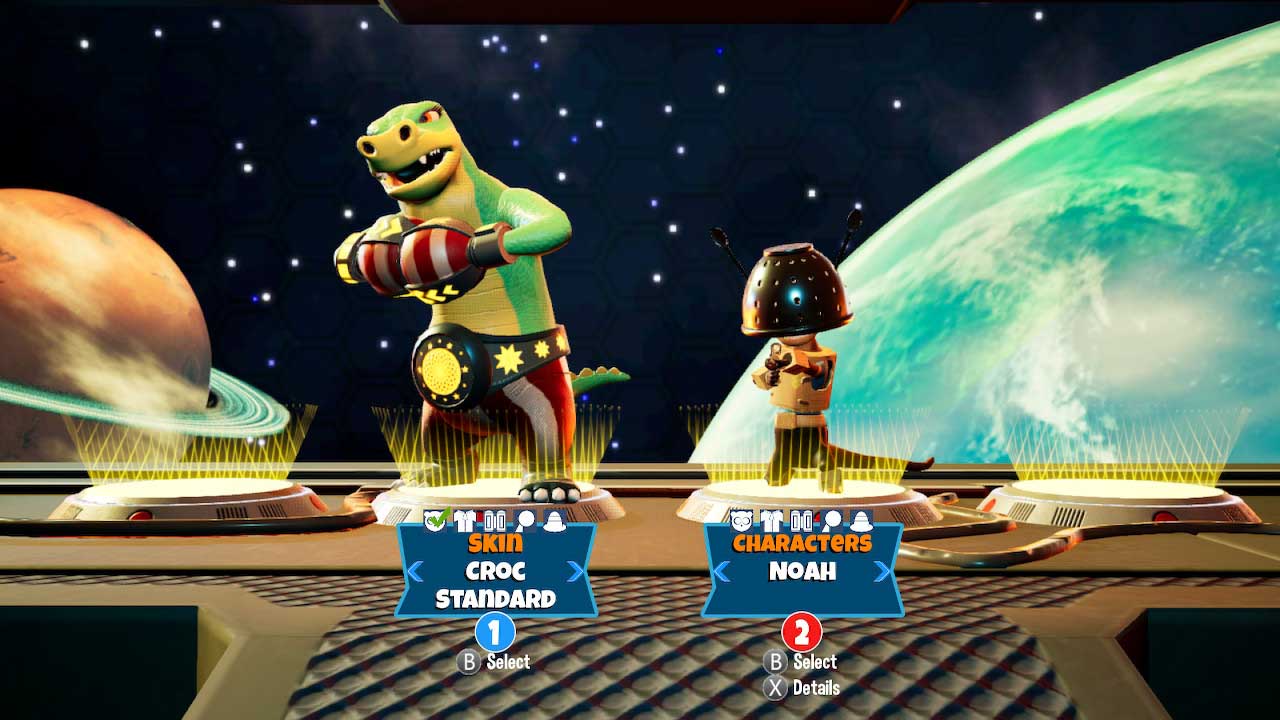 Each stage’s task is focused around destroying Tiko’s robots to acquire points or avoiding his dangerous weapons as they invade the colony. Your progression through the game is rated using a system which will be familiar to anyone who has played a smart phone game, unofficially known as the “three star rating system”. You need a specific number of stars to progress through the story and unlock new stages, and end up having to repeatedly play levels to earn more stars, which feels like a grind. Grinding isn’t always bad, but it only works if the player is rewarded with something of value, such as additional equipment to improve character attributes; but it should never be a necessity for progression.

Your rating on a stage is based on how successfully you complete each of its objectives, which are generally pretty uninspiring and usually involve you performing, again, simple tasks such as transporting explosives to destroy enemies, holding bombs to prevent them exploding, shooting various targets (literally), or flying through rings with a lack of precision.

As you progress through the story, you unlock some cosmetic items to customize your character, as well as new characters armed with different weapons. To me, this was a bad design choice, since you start with only one available character. You need to complete all the campaign missions in order to unlock additional characters – even for use in multiplayer, meaning if you’re just in the mood for versus mode, you have a limited roster to select from.

The split screen versus mode of The Otterman Empire is pretty decent and is probably its best mode. It’s a lot of fun fighting your friends locally, but it’d be much smarter and cooler if they added online multiplayer or bots – especially considering the current climate we are living in, with limited opportunities to venture outside. 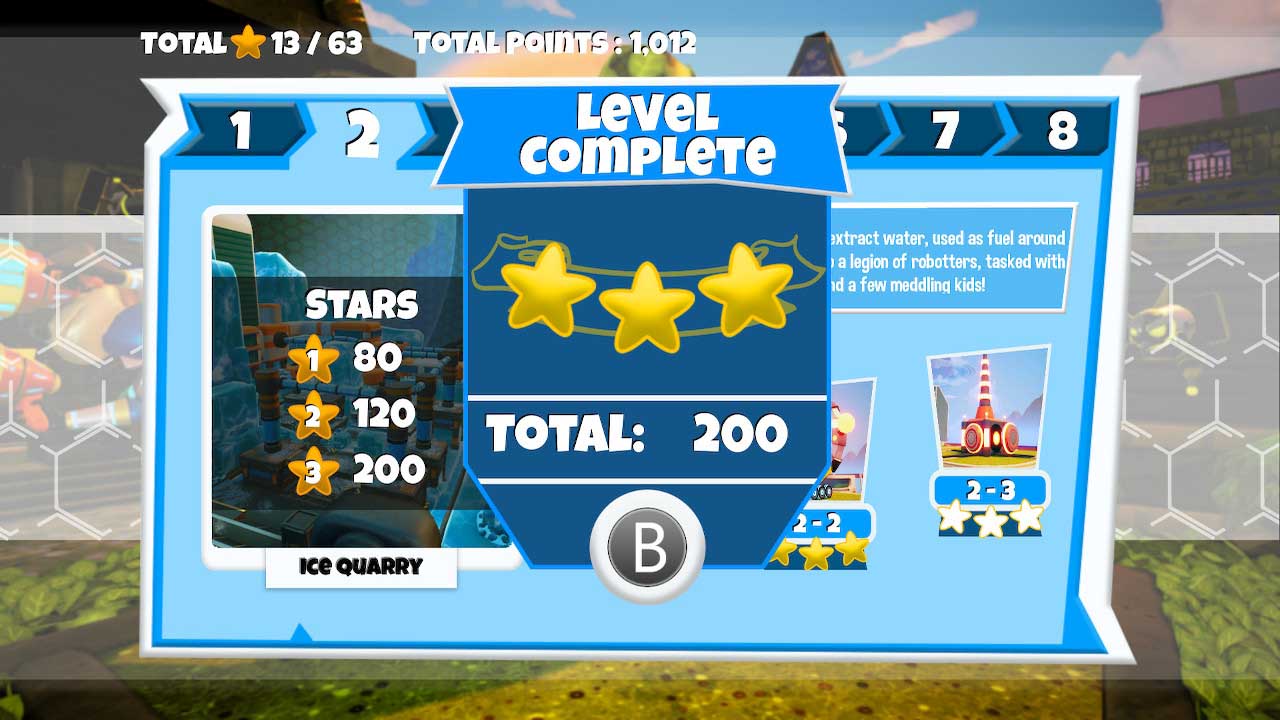 Versus mode features only one mode: free-for-all, and we’re given the option to play with up to four players. The only thing offered to spice things up a little is the ability to select whether to enable in-game objectives (the same already found within the campaign mode) during the match.

Each available character has their own special ability and loadout, which includes a selection of submachine-guns, shotguns and long-range weapons. This provides some variety to gameplay, but you always get the feeling it’s not enough to sustain the overall replayability of gameplay or even the fun.

In the end, The Otterman Empire ends up offering little in the way of fun, with a weak campaign whose storyline lacks originality and intrigue, also a casual free-for-all multiplayer battle which is limited to local split screen. Its mobile-centric “three star” rating system also results in the main game feeling like a bit of a repetitive grind.

Finally, the Nintendo Switch version has some issues regarding the low performance moments, textures that take too long to load and random freezes. Well, obviously it was released very unpolished. Sadly, despite my initial hype for the game, The Otterman Empire just proved to be a disappointment and mediocre.

The Otterman Empire is a 3rd person party shooter game, with a campaign mode and local multiplayer up to 4 players.