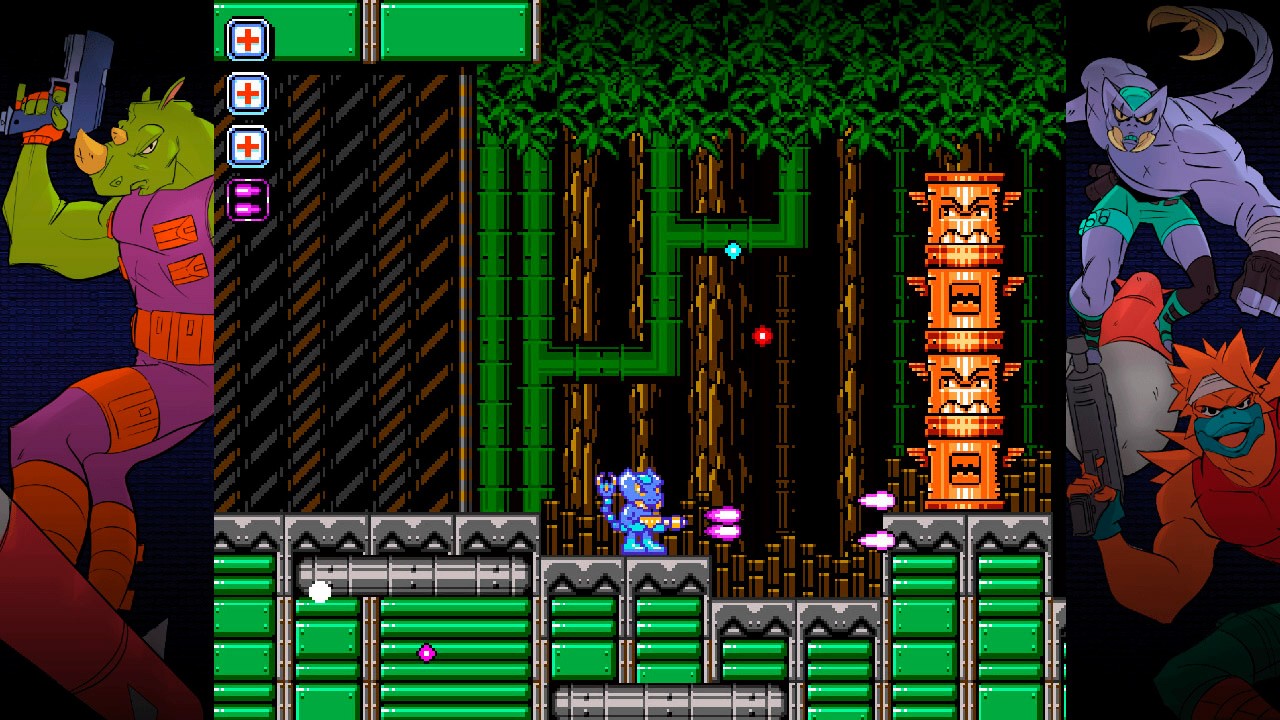 Back in the eighties classic cartoons were released nearly as much as Ratalaika Games publish. There were many to choose from like Voltron, Transformers, Thundercats, Teenage Mutant Hero Turtles and He-Man. More recently, thanks to the likes of Netflix et al some of these titles are either more accessible or rebooted to some extent. I’m mentioning these old school animations because Clash Force almost resembles these titles in its execution, the question is whether Clash Force will be a memorable classic or just another forgettable indie game.

In Clash Force the Evil Crackman and his evil henchmen are causing much mischief and mayhem, the only team capable of stopping them is Clash Force. You can choose from three characters which are Voom, Scorpido or Echid and have to make your way through several levels of forest bases, hydrofied deserts, underground mines and you will finally enter the Crackman Flying Fortress lair. Clash Force is a run and gun title, you run left-to-right shooting everything you can see. Like most run and gun games, there are plenty of power-ups to collect on the way to help with your endeavours. 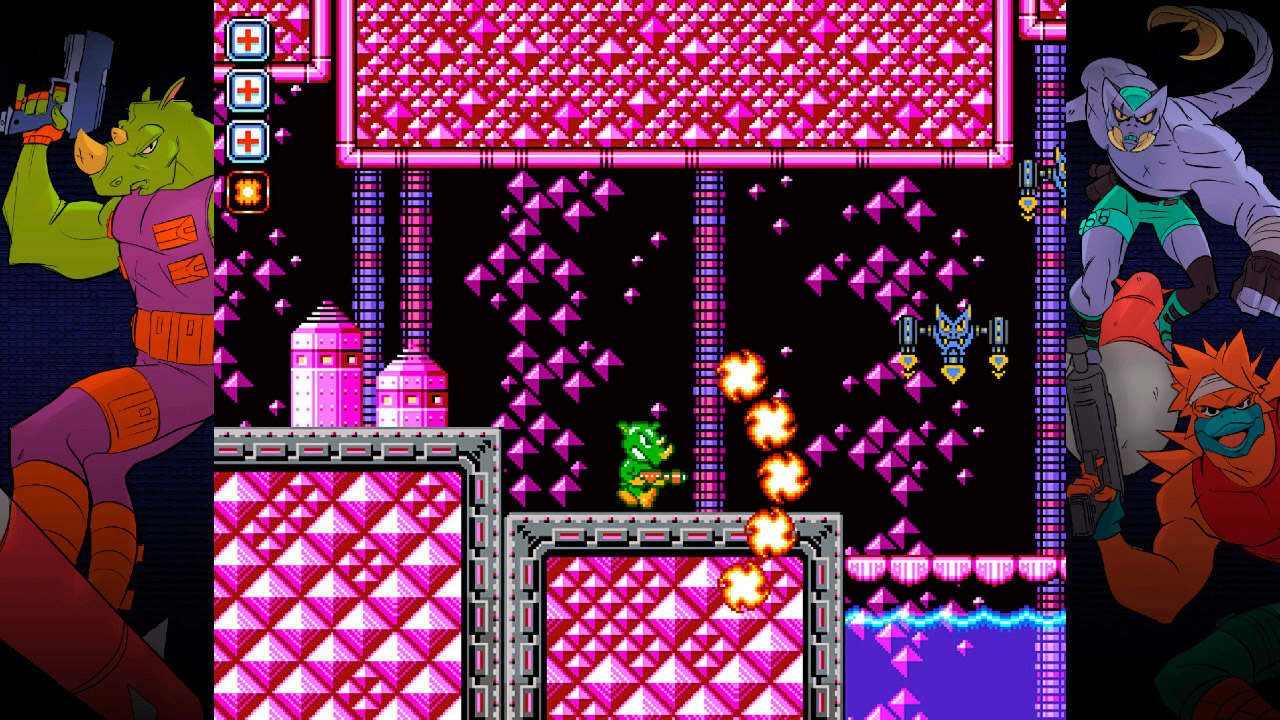 Clash Force is a very simple game. You choose from one of the characters at the beginning, but there is no difference in how they play or the skills they have; they are effectively just 3 skins you can pick from. That is a real shame because if each character played differently then you’d want to replay Clash Force again to see how different the experience could be. Once you get into the levels, you’ll soon realise that you can simply hold the shoot button down and run forward. The earlier levels on any difficulty are very straightforward. You can pick up power ups on the way that will help you dispose of enemies more quickly. There is also the opportunity to get a new weapon in between levels. The only issue is if you die then you restart the level minus the new snazzy weapon, however power ups are plentiful so you’ll find a replacement pretty soon in Clash Force.

Clash Force is a mix of shooting and platforming, there is no change to that formula as you move through the twenty or so levels. The enemies increase as you progress, but they all follow very easy patterns so from an early stage they are quite easy to beat. The boss enemies are much larger, but again, they follow similar patterns so you won’t really be challenged in Clash Force. The level design in Clash Force is pretty standard fare, the usual forest, lava levels are included, there really isn’t much variety in how they play. Each stage has some level of detail to it, but Clash Force resembles an eighties 8-Bit title squeezed in between two pictured margins making Clash Force look like an arcade game. You have three health points, if you die you need to restart the level. The levels are very short, so you’re likely to complete Clash Force between 1-2 hours, you’re very likely not to replay it once completed though. 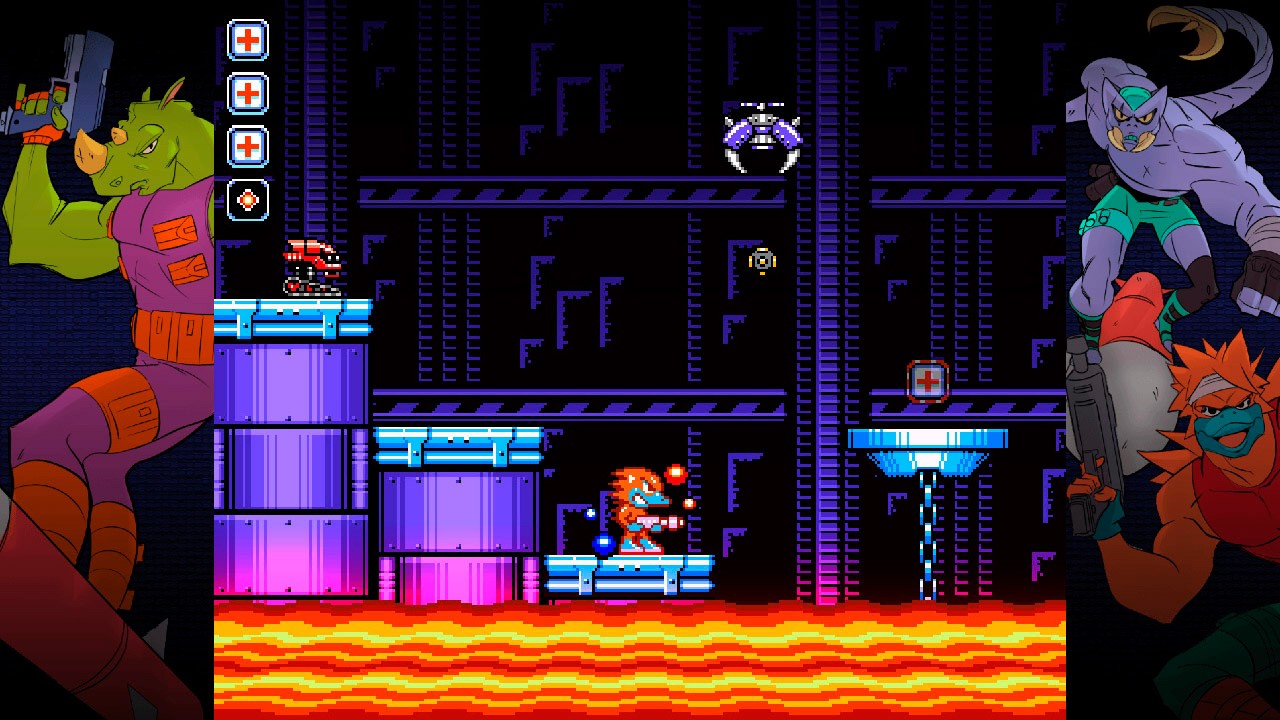 Clash Force graphics follow the same nostalgic qualities you would expect from a classic runner and gunner. Unfortunately, that means they are very much pixelated but not particularly detailed. The characters you can play as are pretty bland looking, and this is a recurring theme as the enemies blocky textures are unappealing. Musically Clash Force like most classic games has an excellent chip tune score, which definitely puts you in the mood for some enemy destroying. Once completed Clash Force offers nothing in terms of replayability. There’s no point playing with the other characters because they all play the same. Nothing is unlocked when the Clash Force is finished and there is no high score mechanism in place.

Clash Force is a run and gun game, which lacks a little too much depth for it to make a splash into the genre. The bland looking graphics interspersed with very short levels means your Clash Force is very much a short-lived one. Blowing up things at a fast pace is fun, but that is something which wanes after about 10 minutes in Clash Force. There are better games in the genre, but if you are searching for a quick fix, then Clash Force fits the bill just expect nothing more than a few minutes of actual enjoyment.