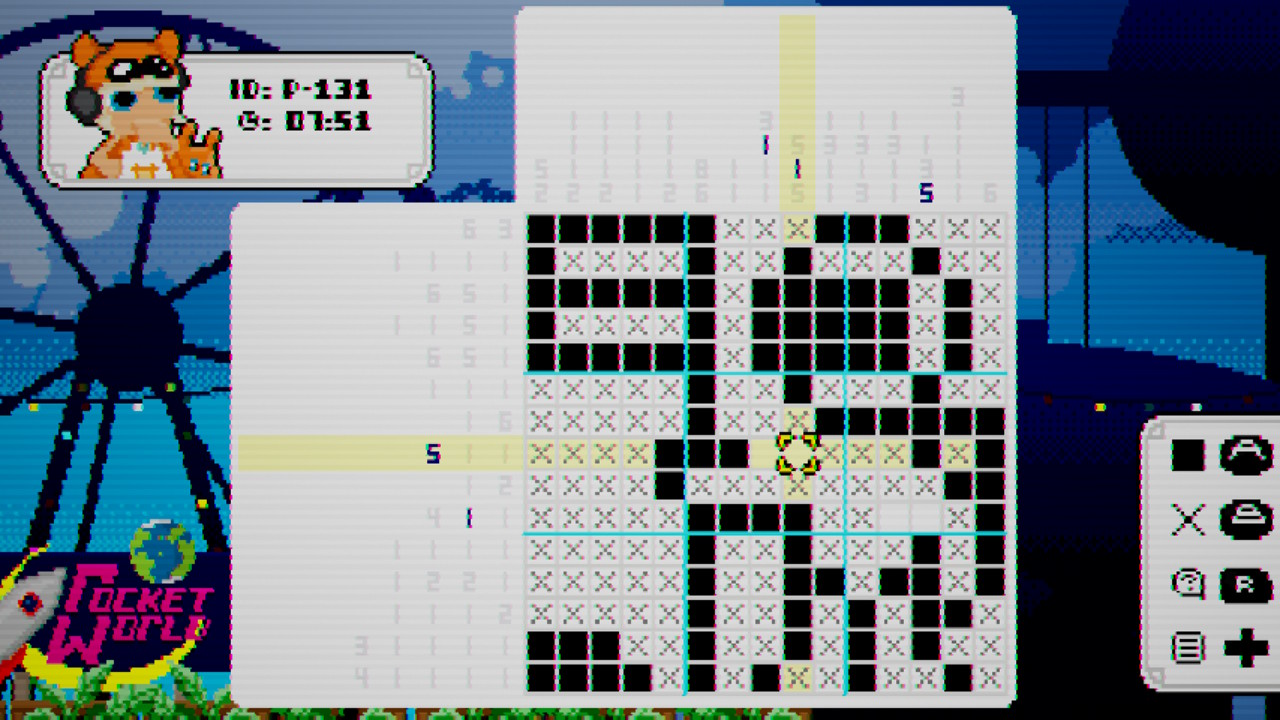 Indie Gems Bundle: Nonograms Edition for Nintendo Switch packages together two story-driven nonogram/picross games. For people who already like these number-grid puzzles, this bundle is an easy recommendation, so long as you’re prepared to have a couple of caveats thrown your way. If you’re a newcomer to these types of puzzles, my advice would be to look elsewhere for your first taste of nonogram fun.

Indie Gems Bundle: Nonograms Edition gives you Piczle Cross Adventure and PictoQuest, each being a nonogram puzzle game with a twist. For the uninitiated, nonograms are puzzles where you have to complete a grid made up of cells which can either be filled in or left blank, the aim being to make a nice picture out of the finished grid. Numbers at the top and left-hand side of the grids give you all the clues you need. The complexity of these puzzles can be dialed in a way so that simple 5 x 5 grids can be solved in under ten seconds, whereas bigger 20 x 15 grids can sometimes take up to an hour to completely finish. Nonograms have a wide appeal to them, and you definitely don’t have to be a maths wizard to enjoy them. The twist these two particular games use is primarily around introducing a narrative to what is otherwise a straightforward puzzle game.

Piczle Cross Adventure makes you journey across a vibrant town, restoring items in the world which have disappeared after being ‘pixilated’ by “under_SCORE”, a robot menace sent by Dr. Mona Chromatic to remove colour from the world. Its light-hearted humour carries a fun story, housing a conventional nonogram puzzle game underneath it. PictoQuest makes you journey across a fantasy land as a knight, slaying beasts you meet along the way. Whilst the world you travel through in PictoQuest is a little drab, it uses a twist on the stereotypical nonogram experience, in that you’ll battle enemies as you solve puzzles, and for every row or column you solve you’ll hamper an enemy’s attack and lower their health. Take too long to solve a puzzle and your health will be gone, meaning you must start the puzzle all over again. Whilst you can also use items in these battles with various effects, it would be overly generous to call this an RPG of any sort, more just a puzzle in which you are maintaining some extra resource-management.

PictoQuest definitely adds something to the nonogram formula, but often this only translates to pressing the ‘R’ button every twenty seconds to change which monster you’re attacking. The actual threat of being defeated is minimal, as monsters can also miss their attacks, and through my seven hours with PictoQuest I didn’t lose a single battle. It would have been nice to have a few more varied scenarios – far too often you face just a single enemy, and the extra fun definitely comes from switching focus between different attackers. 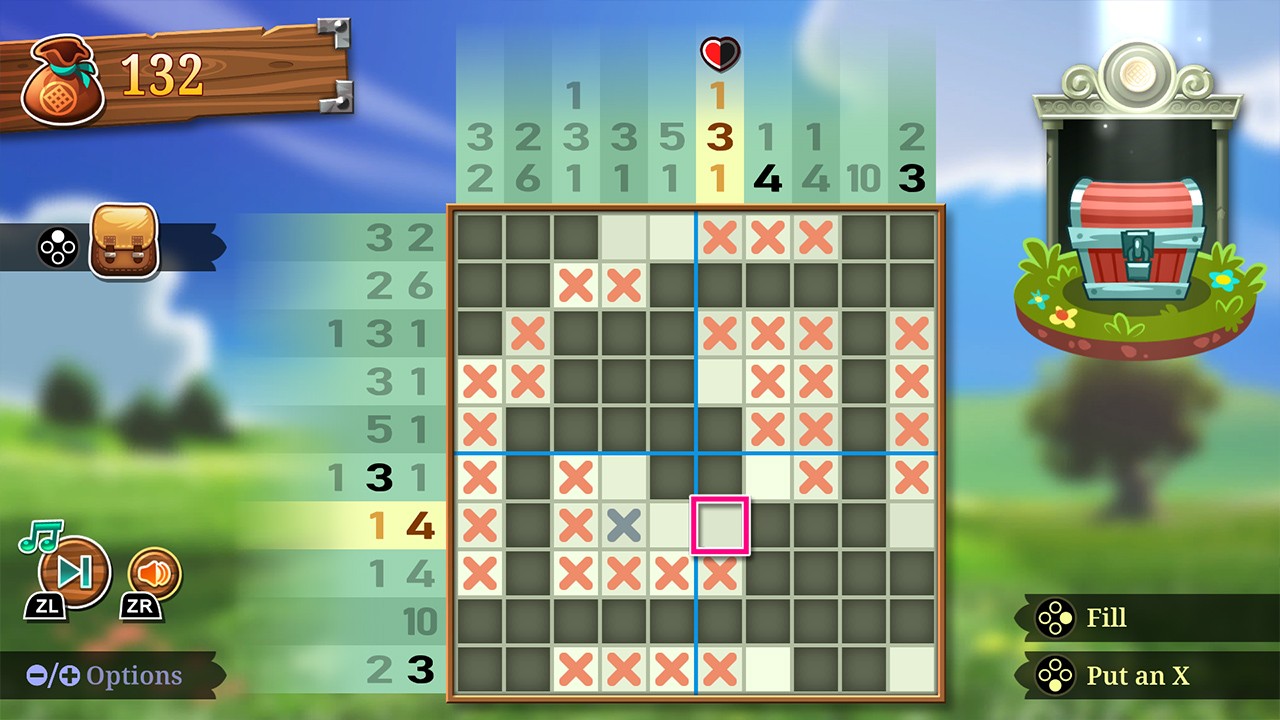 Both games hamper the pure nonogram experience somewhat in that you’re very limited in the tools given to you to complete your number grids. Piczle Cross Adventure features the most thorough tutorial I’ve come across in any nonogram game in recent memory, but neither game features a way to mark squares, only to fill in or cross them out. And only Piczle Cross Adventure features a measure which allows you to count the cells your cursor passes as it goes along, another staple for solving nonograms in other games. For fans of these kinds of puzzles, this will challenge the ways you’re used to tackling nonograms, if not outright cause you a bit of trouble using the tactics you’re used to using to solve these grids. This does stymy the Piczle Cross Adventure experience quite a bit, but PictoQuest actually does something a little different, which actually changes how you might approach a nonogram entirely.

PictoQuest not only changes up the regular nonogram experience by having you battling monsters as you solve your grid, it shifts how you will approach solving a puzzle by giving you immediate feedback when you fill in a square. If you fill in a square which isn’t meant to be filled, not only do you get attacked by a monster (or lose money if you’re attempting to open a treasure chest), you’ll also see a cross fill the cell you were filling immediately. This adds a whole new dimension to solving nonograms – couple this with the time limit put in place by monsters potentially attacking you as you play, I took risks whilst playing, risks I’d never dream of doing in any other nonogram type game. Do I have a vague feeling this cell should be filled, based on the picture I think I’m building up here? Do I have a monster ready to attack me in the next few seconds? My inherent reluctance to break the rules caved within an hour or so of starting PictoQuest, but once it did it felt great. Whilst the story in PictoQuest is largely superfluous, the extra layers of strategy it employs over the regular nonogram experience work great.

And the story in both these games is just that, largely superfluous. I can’t see anyone wanting to play either of these games because the story is jumping out at them. It puts the bundle in a tricky position overall, because really the appeal should then be a tight nonogram experience, which unfortunately it isn’t either. PictoQuest introduces interesting takes on new nonogram features, but at the cost of limited options around how you can solve the puzzle you’re dealt. Piczle Cross Adventure gives you a multitude of options you can change to customise how you solve grids, and offers a substantially longer playtime at around ten hours versus seven or so, but misses on key features. I often found myself misclicking around the grid in a jarring way which seemed to speak to a slight delay and slowness to how the grid handled user input generally in the game. For general performance, whilst PictoQuest runs excellently on the Switch, Piczle Cross Adventure definitely shows signs that the Switch wasn’t its intended home. I ran into issues just navigating through menus, as the roles of certain buttons seemed to change depending on how deep I was into various settings. Playing in handheld mode, you’ll immediately run into issues playing games if you don’t turn off the feature which adds TV ‘scan lines’ on the screen. By default this is on, and it makes trying to figure out the numbers on the screen harder than it should even be in a game all about numbers. And lastly, I found that every couple of hours I was running into game-freezing issues which I could only fix by completely rebooting the game. Luckily the game’s auto-save feature ensured I didn’t lose any progress, but it still wasn’t great to have to rely on this to make sure I could keep playing the game. 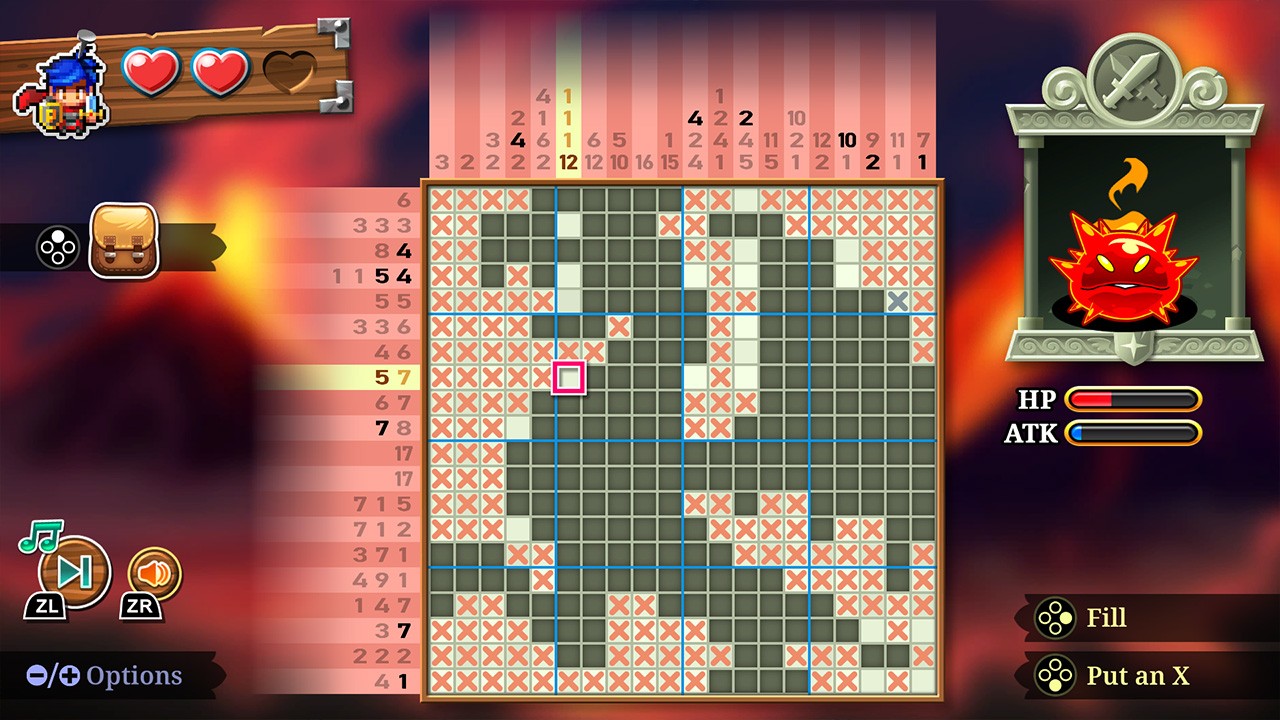 In terms of how the bundle works, this shows up as one tile on your Switch home screen. And when you click to load up the bundle, you’re given the choice of booting into either Piczle Cross Adventure or PictoQuest. Once you’ve made your choice, there isn’t any way to go back to this screen from any in-game menu, meaning you have to close down the game you’re running and load the bundle up again to change games. This is a very common practice with these kinds of bundles, but the good news here is that it takes only a couple of seconds to load up the screen which offers you the choice of game to boot, so this becomes a very minor quibble.

What you’re left with is a collection that is tough to outright recommend. Piczle Cross Adventure gives you a solid and engaging story, with excellent tutorials, and a great selection of increasingly difficult puzzles. PictoQuest gives you a new take on nonogram puzzles, with a great soundtrack complimenting it. Neither of these games give you nonogram puzzles delivered at their very best, however, and that’s something to be aware of before buying the bundle. If you’re wanting pure nonogram puzzling, you’re still far better off playing the Picross S series on Switch, but if you just want something to scratch that itch, and you perhaps want to try something new, this bundle will offer a good few hours of fun, and have you experiencing what nonograms can offer in fun and different ways.

This bundle will scratch your nonogram itch and have you experiencing what these puzzles can offer in fun and inventive ways for numerous hours.