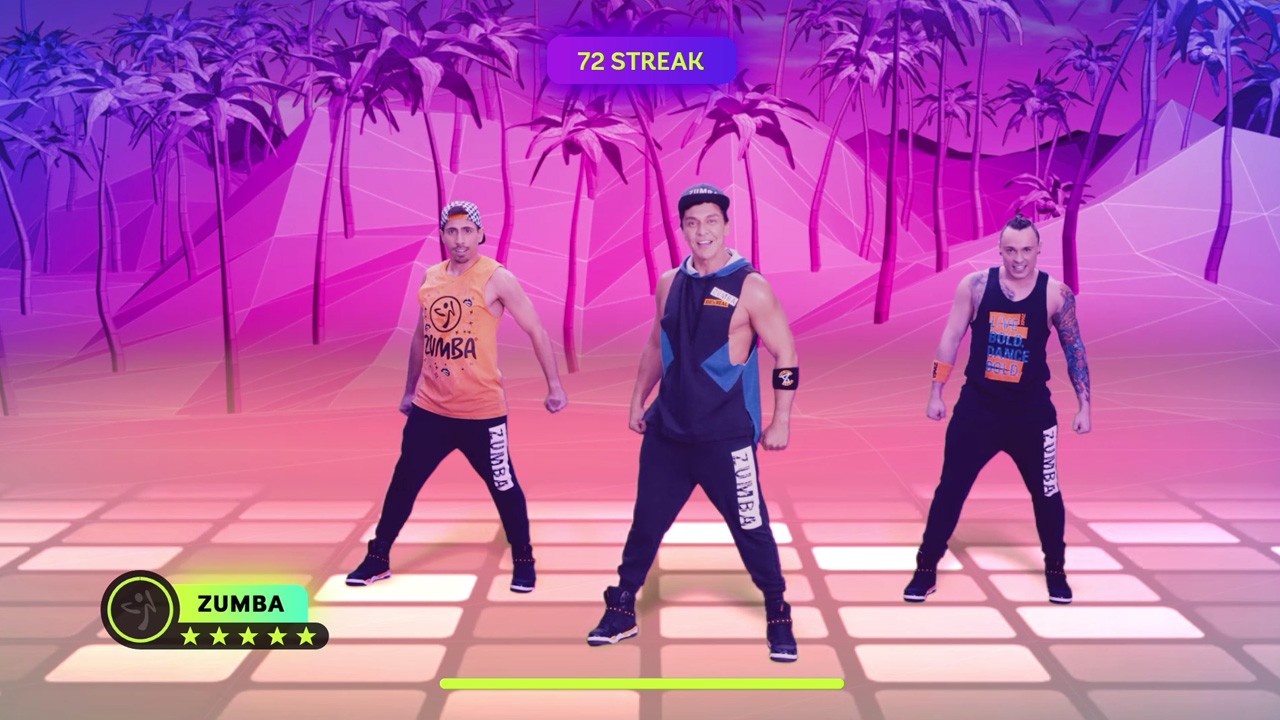 The Nintendo Switch is entering into a really interesting period of time where both developers and players need to start being careful. For many people who’ve frequented the eShop and seen the tide of GameStop oddities cropping up, they already know that the hit-or-miss quality aspect of Nintendo is in full effect. Especially with Black Friday and Christmas just around the corner, we might see a slew of grandparents, parents or even innocently ignorant significant others picking up games for presents that are, shall we say, less than ideal. There are so many great titles in existence, and that’s not just for gamers, that’s for everyone. The Paw Patrol game is still decent for very little kids, the Tsum Tsum Festival is great for a group of people, and Mario Party, while effectively abandoned by the side of the road, can still offer a bit of fun and replay value for many. But fitness is the name of the game this time around, as the Switch starts to go down the same road the Wii once traveled over a decade ago. Ring Fit Adventure is killing it in sales and inspiring people to be more active, and things like the latest Just Dance allow family and friends to be silly while working their bodies. Now, the release of Zumba: Burn It Up from 505 Games might be another notch in the belt of would-be fitness enthusiasts. But buyer beware: know exactly what you’re getting into before you take a bite of this AAA retail priced game.

Zumba, for those who don’t know, is this dance fitness craze that sprang onto the field about 13 years ago (give or take) and has had a fair reach in the world of classes and instructors. Combining the best of Latin music, hit-hop style dancing and a whole lot of booty shaking, Zumba is that thing that you see people doing and actually think “that looks like a lot of work,” and that’s mostly because it is. With Zumba, you gotta be willing to make a lot of short, tight, repetitive movements that resemble moves from Step It Up or Stomp the Yard while still being attainable for most people. I took a couple of Zumba classes years ago, and it was fun, difficult and certainly not my thing. I don’t really have rhythm in the traditional sense: I can still smash arrows on the floor with the best of them, but getting into a proper groove and feeling the beat can be harder. So keep all of that in mind as we bravely move ahead with this game. 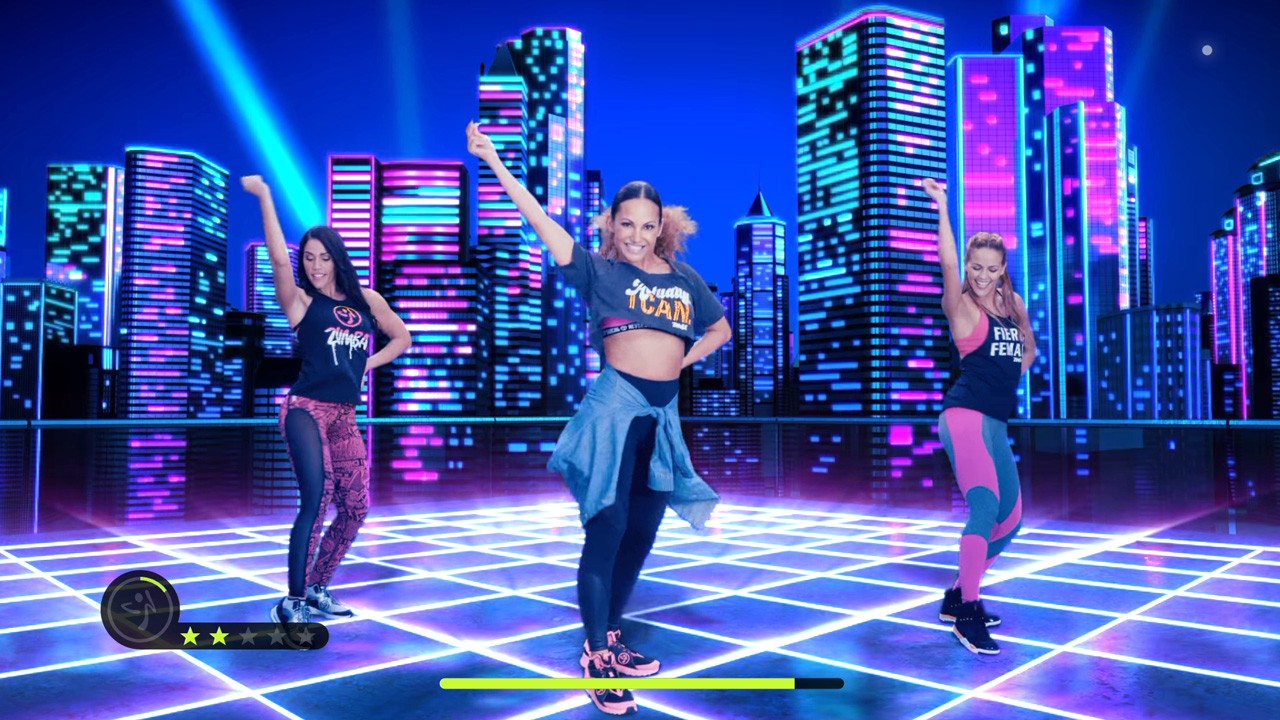 Zumba: Burn It Up is the answer to people who like the concept and construct of Just Dance but would prefer something that’s a bit more buzz-worthy and potentially more insulated in real dancing. You’ve got the options to dance with friends, dance by yourself, make a profile and accomplish tasks and goals, and try to get high scores based on your moves. Much like Just Dance, you are given one to four dancers on the screen who are dancing along with you, asking you to mirror their moves and try to keep up with the score. The moves are done with JoyCon in hand (just one, so don’t stress about double gripping) and often set to some really saucy and strong music that combines the best of salsa, Latin, hip-hop and some light remixes of current and popular songs. Very light. As in there were only two songs I recognized and they were pretty different than the ones they were citing. I Like It by Cardi B., for example, seemed to almost sample the song more than remix it, as the sound designers were more focused on being able to loop in the chorus and some additional patches of instrumental to best stretch out the movement periods.

To the game’s credit, Zumba: Burn It Up definitely incurs more action and a “workout” sensation than something like Just Dance. In the similar vein of Ring Fit Adventure, you get out of this game what you put into it. If you think you’ll do a single song and call it a day and have flat abs and a dynamite ass in three weeks, you’re delusional and probably going to hate this game. If you understand that you should be dancing something like five songs in a row in order to really work up a sweat, then you’re golden. Zumba: Burn It Up has a lot of scalable difficulty in terms of your experience and your goals, and you do have the ability to set up “classes” instead of just free dance, allowing yourself to get into that Zumba Class mentality. It’s actually a really decent setup, because the dancers you follow aren’t caricature silhouettes like Just Dance. They’re real people, who are actually doing the Zumba workouts, and they look really good while doing it. This is a double edged sword, because I can see that my instructor and her backup dancers fellow instructors are pretty good and dressed for success, wearing cool tops and bottoms and still busting out the moves. Me, meanwhile, in my running shorts and loose tank top, look like wet trash and am keenly aware that I probably jerk and move like I’m having a seizure while I try and do the routine. However, it feels effective. I’m sweating at the end and I have an idea of my calorific burn and goals, so that’s all good.

In fact, compared to something like Just Dance, Zumba: Burn It Up is pretty solid on the fitness level. This feels more like that service that Bob from Biggest Loser was advertising on Hulu for a while (Daily Burn), where I’m getting a video class piped in and I’m theoretically dancing with people all over the world. When you hand a JoyCon to a friend or a family member, they need to understand this as well, and also understand that this is NOT Ring Fit Adventure. You’re only moving with a JoyCon in hand, so all that waist and hip movement needs to be done without worrying if the game is tracking it properly. This, I suppose, is the big caveat: a lot of the work is theoretical and relies on the player to be accountable and do it correctly. You could easily shirk this game way easier than other dancing or fitness games, though it has the benefit of making you do real, synchronized workouts instead of just being a cog in a dance machine. Honestly, this is a strong alternative to getting down to the rec center and doing a class on Thursday nights provided you have the space and the speakers for the effect. 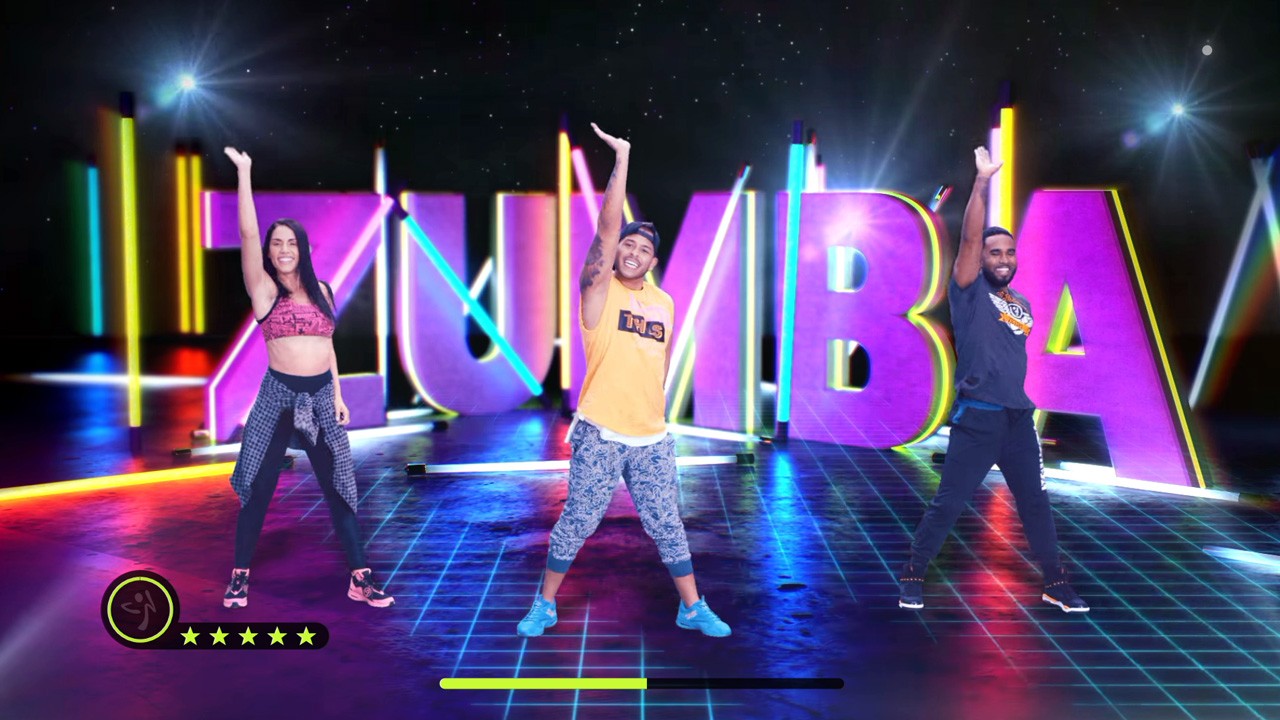 The game runs exceptionally well, loading up faster than other titles of the same size (it’s nearly 7GB installed) and the graphics, with all the live-capture dance instructors and such, look fantastic. My only note is that a majority of the music is either “Zumba original” or mild remixes of songs that are, at best, middling in the charts. With something like this, it’ll be hard to capture completely green and new fans because there’s not a hook that’s immediately apparent. There’s no online competition mode (why would there be?), the dance moves are difficult even at the lowest difficulty (not impossibly so, just at the level you’d expect from a workout) and the music is pretty forgettable. It sounds nice, it gets the job done, but I sometimes like to hear familiar tunes to get it going. I still throw on some of my favorite tunes to simply do sit-ups or squats because it’s more fun to work out with music, and songs I love hit the sweet spot. Keep that in mind before diving into Zumba: Burn It Up.

Still, the overall package is a solid one, and could be extremely beneficial and even enjoyable in the right hands. If you have a loved one who enjoys Zumba or even is mildly interested in Zumba, this is a pretty great workout game that’ll be a higher ticket but still affordable gift in the holiday season. If your friends or kids want to parlay from Just Dance into something more difficult, this might be a weird lateral move, not one that I’d recommend without a sampling first. And if you think that you’ll just be able to make this a background activity that you bust out for less than 10 minutes a day, I think you’d better go pop and lock elsewhere, because you’ll just be wasting your time and money.

A spicy dance that helps burn off those calories, Zumba could be your new best friend on the Switch as long as you put in the work and know the game’s limits.