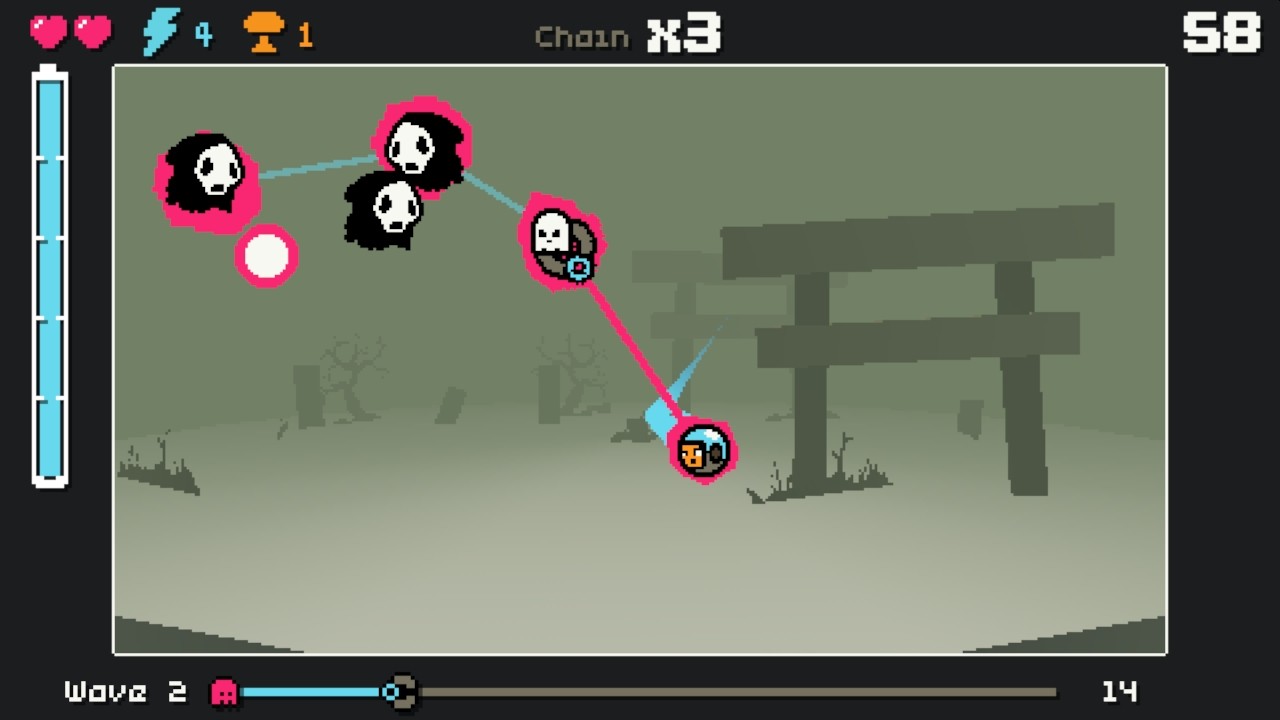 Have you ever seen the movie Remember Me? It’s this hilarious movie where a British actor and an Australian actress both pretend to be New Yorkers, with some bananas accents to boot. Robert Pattinson just wants to try to get Emilie de Ravin to totally fall in love with him so that he can move on past his brother’s suicide, and she is rejecting him because she still is dealing with the trauma of watching her mother get murdered in front of her. Eventually, they both realize that they could be good for each other, so Robert Pattinson goes and try to patch things up with his dad at his office, in the World Trade Center, on September 11th, 2001. Yea. Someone in Hollywood made two people the saddest they could possibly be, and then try to make things better before capitalizing on the saddest Americans USED to be. The reason that I bring this all up is that Ghost Grab 3000, another game from Matthew Glanville, is a perfectly competent and even really good arcade game, has one of the darkest back stories ever in order to make the game work, and I just thought everyone should know that.

Ghost Grab 3000 is a fairly fun and simple arcade speed game that involves you trying to grab ghosts, as the title implies. See, at some point, due to a world ending event that no one bothers to talk about, the entirety of humanity perishes. Fair enough, we had a good run. But now the concept of Heaven or Hell or any sort of afterlife seems barred for the humans, and our spirits wander the Earth, corrupt and angry. They cannot live, they cannot die, they cannot move on. Thus enters GG-3000, our plucky little hero who is ready to head down to the wretched planet and…free the cursed souls. You know, by destroying them. With lasers, EMPS and nuclear weapons. So if you weren’t quite clear, all of humanity is dead, our souls are endlessly trapped in a desolate world, and a fun little robot is coming to obliterate us from existence. Awesome. Just like my guidance counsellor predicted.

Alright, enough about the apocalyptic backdrop, let’s check this game out. With Ghost Grab 3000, the key is to grab and detonate the ghosts in question, each with the same button (B). You push it once to capture them in a tractor beam of sorts, at which point you can simply obliterate them and call it a day OR begin the combo procession. The energy chain between you and the ghost stretches infinitely and touching another ghost with the beam then traps that ghost as well. As you might have guessed with an arcade style game, tagging more and more ghosts leads to a higher score multiplier when you detonate them, so you have plenty of incentive not to just do one and ones repeatedly. Higher chains lead to more drops, which we’ll talk about in a moment. 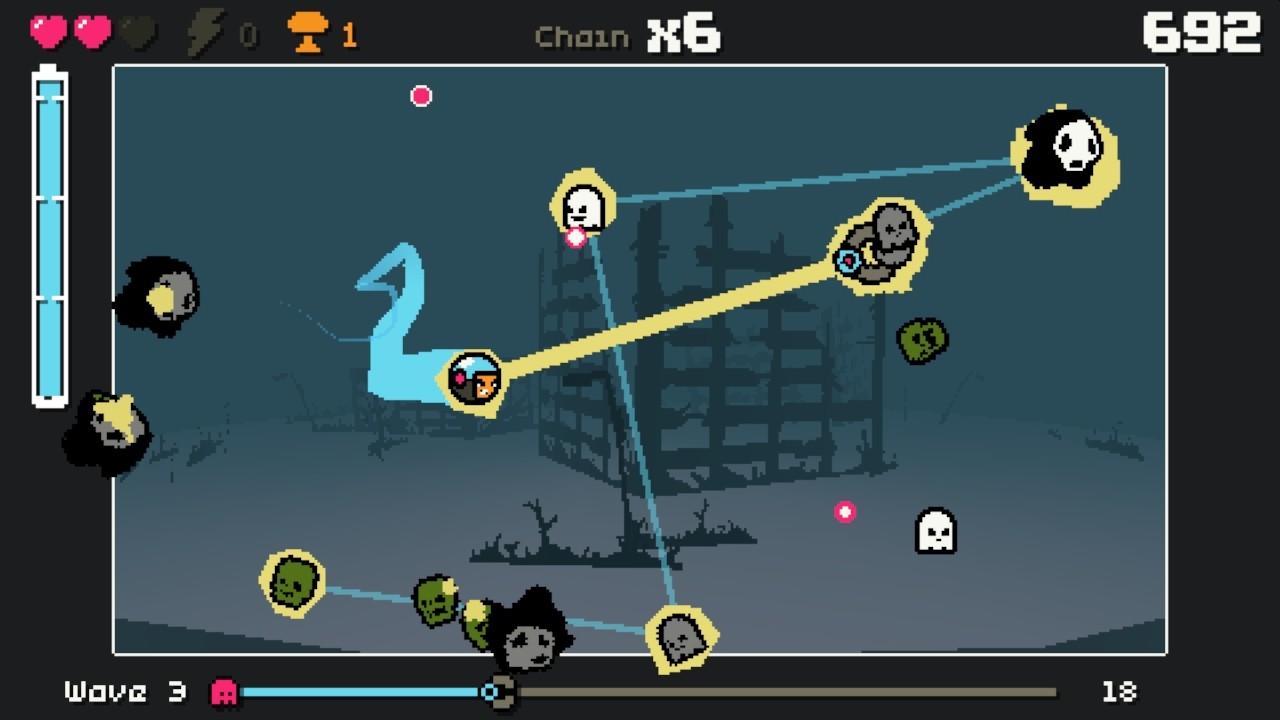 The ghosts, as you imagine, aren’t just going to sit there and face erasure without a fight, and this is where things get a trifle interesting. The second a ghost is hit with the grabber beam, they have just a moment of immobility, then they keep moving along as if nothing was wrong. Ghosts also tend to fire energy bullets back at you, and these can vary in several terms (small to large, fast to slow), not to mention they actually take quite a while to dissipate. The ghosts are also large to small, fast to slow, and seem to have different levels of aggression in terms of avoiding you or actively trying to engage you, which, naturally, your GG isn’t a big fan of getting touched by ghosts. Each wave has a set amount: defeat the ghosts and you survive to the next wave. Get touched too many times (you have a set amount of lives)and it’s game over. That’s the ball game. In truth, that’s it for Ghost Grab 3000, so feel free to leave the review if you’ve decided, so far, that this game is boring, humdrum trash.

Those of you still remaining must at least be a bit curious as to why I’m still writing about this indie title, and I’ll happily expound upon that. Ghost Grab 3000 has a risk/rewards system that matches up incredibly well with the gameplay, and it factors into a lot of what makes it replayable and enjoyable. The more ghosts you chain before blowing them up, the higher the chance that you’ll get item drops when they die. These items can be things like battery recharges, which are important: every time you grab a ghost, you need to expend some energy, so you CAN’T just plink them one at a time without draining yourself and waiting for death. You might be able to get EMPs, which are blasts that can hopefully save your skin if you’re getting partially surrounded (they won’t help if you’re totally entombed). The EMPs don’t drop unless you’ve gotten a minimum of five ghosts chained up (in my experience), so don’t go using them thoughtlessly. Most importantly, a ton of dead ghosts means coins, which surprise, go to a shop where you can get upgrades, like new ship variants, battery upgrades and different flavours of ghost beams, all of them different, but none really overpowered (not until you’ve got tons of coins, which requires both skill and patience). 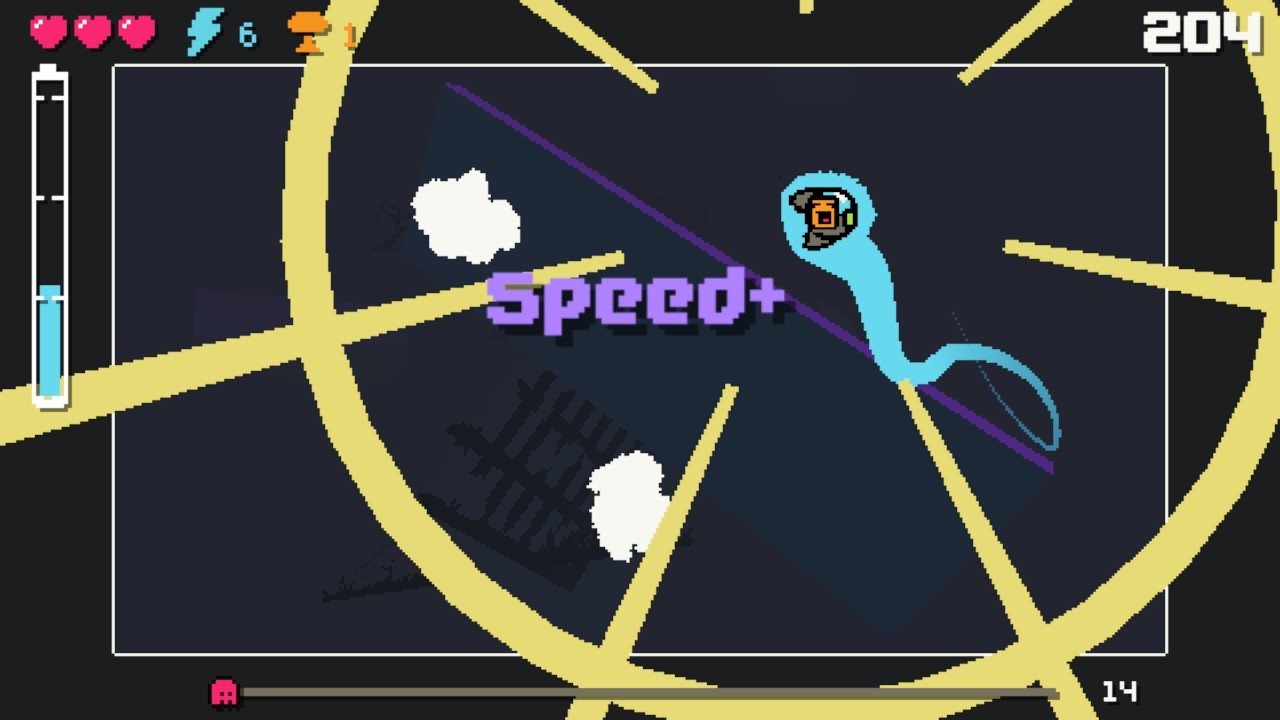 Also, like Matthew’s other game (Singled Out), Ghost Grab 3000 is blessed with incredible polish for a very simple idea. When it comes down to it, the key to survival for GG is being responsive, quick and accurate with dodging around ghosts and their projectiles. While this might not seem like a lot at first after the third wave it quickly turns into a bullet hell dodger that utterly entrenches you in madness. Your little GG has a small variety of facial expressions as it totters along, swiftly darting betwixt twin columns of death, and inexplicably surviving to explode ornery spirits with joy on its face, if not in its heart. While the initial load of Ghost Grab 3000 is a tad long, it then makes up for it by having zero lag or input delay when it comes time for game time. You can get wrapped up into the world of the game in mere seconds and then quickly invest minutes into hours getting the formula right. Figuring out your own strategy for the mid-level upgrades: do you amp up your speed, grab a nuke, or waste the upgrade on getting back another hit, because you are faltering now at wave 7? Plus, this game has a single but highly addicting soundtrack for the whole ordeal, something that feels like Mega Man X meets Ducktales, and I positively adored it. I want to buy the game on Steam so I can see if I can extract the soundtrack and listen to it separately on my iPhone. It’s got the right feeling to be determined and invested, and I loved it.

Factor in some really clever achievements (I blew up 13 ghosts, marvellous) and the global leaderboard (airplane mode on the road, people!) and Ghost Grab 3000 is an intense but fun run through a grim, bleak future that has nothing to do with how the game feels. If you can get over the ominous, horrifying stage upon which this game is set, then you will have a blast trying to chain the restless spirits of your descendants together to explode them in unholy energy cleansing. Fun for the whole family. (?).

Ghost Grab 3000: because sometimes ghosts need to be put out of their misery in the cutest way possible.