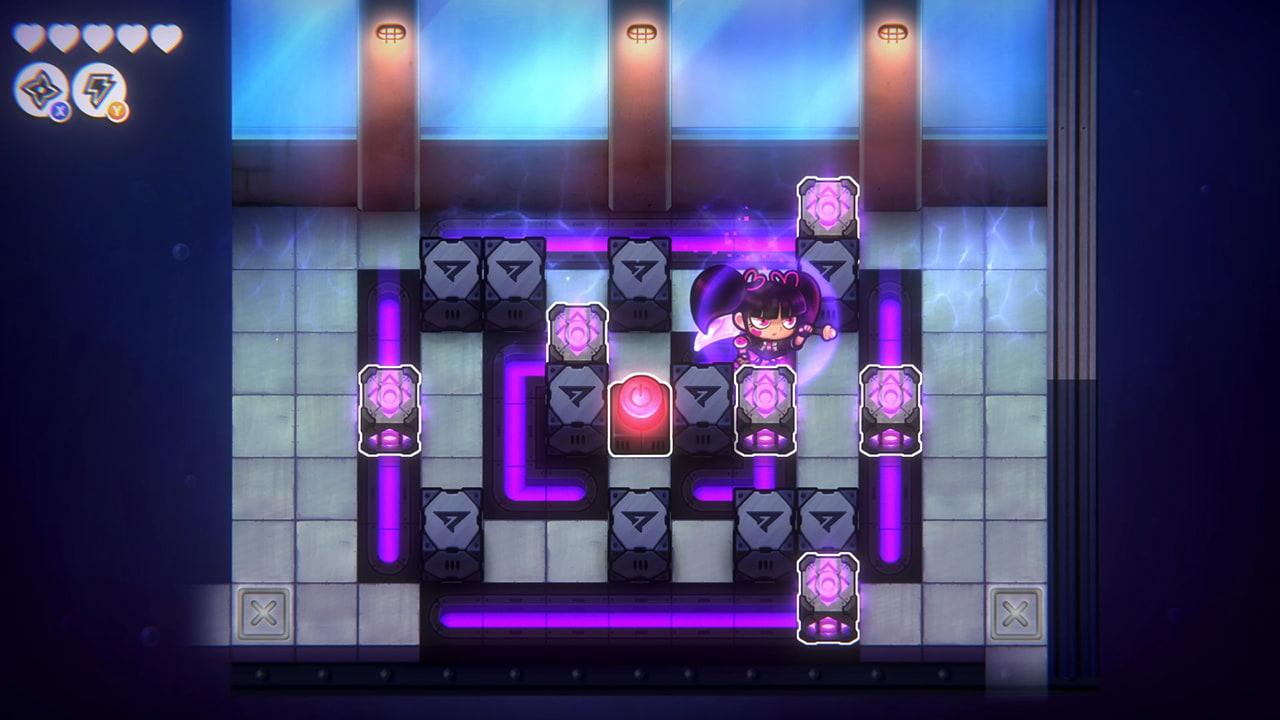 I would never fault someone for trying to do an original approach to a traditional idea. After all, if we didn’t have madmen who made pigeon dating simulators, violence rhythm games or titles where you have to possess a bowl to scare a dog, then the industry would never grow, even though sometimes we deliberately grow away from those ideas. For Cat Nigiri, the idea of creating a puzzle sliding action game is already a formidable one, and then to give it a lot of personality and enjoyment is a totally different hurdle of which to overcome. So believe me when I say that Keen: One Girl Army is a fantastic execution of what could have been an incredibly dull game. It is, however, pretty freaking hard.

Kim is a ninja in training who is being raised by her grandmother in a far-off village. As part of her ninja training (or just ninja duties), Kim is tasked with blowing up the bridge that connects her village to the rest of the mainland, because it looks like zombies are coming and who the hell has time to deal with that? But Kim is curious: why exactly are zombies on the prowl and is it a big deal or not? The question has obvious answers to everyone else, but Kim still wants to explore herself, and ends up detonating the bridge with herself firmly on the opposite side, cut off from safety and familiarity. Kim doesn’t have to quest long before finding out that there’s something freaking awful afoot, and, as it turns out, this is a great opportunity for one little ninja to prove herself and save her whole village, if not the entire world, in the process. 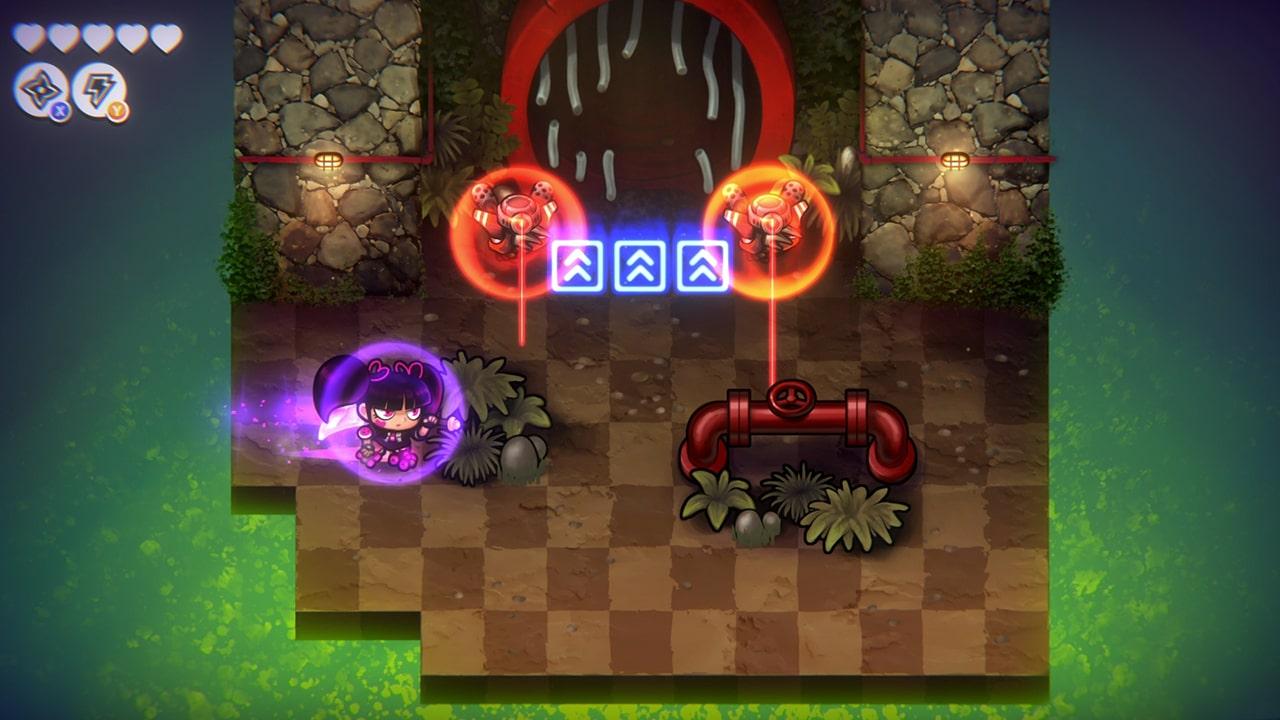 As an action puzzle game, Keen: One Girl Army plays out in a very interesting style. Each of the stages comprises multiple rooms, and the rooms have a combination of walls, obstacles, enemies and items, not to mention several that have secret areas that might not be easily visible or accessible. Kim can only move in one direction, and does so swiftly and endlessly until she hits something, usually one of the aforementioned items. Each stage will have a series of three conditionals that can be met through the different ways that you approach the stage. For example, if you just want to [progress the story and get the whole thing over with, focus on the primary which is “finish the level.” However, being able to clear stages in limited numbers of turns, killing all enemies or taking no damage are also conditionals and can sometimes be done. Sometimes.

Kim will attack enemies as she runs into them or into proximity of them, but understanding the if/then of Keen: One Girl Army is the key to success. If you run directly at an enemy and nothing is behind them, great: you can do a slash through and usually vanquish them with one hit. If you run to where an enemy is and either they are directly in the four directions next to you or you run into them and there’s a wall behind them, you deal one damage and they cannot hit back. However, if you move to a spot and then an enemy moves adjacent to you, they get the drop with the damage and you have to suffer the humiliation of getting walloped, and probably ruining your “take no damage” streak. As the game goes on, enemies have more conditionals, such as hitting you back even if you get the drop, but that’s still the basic long and short of it all. Kim can add more attacks to her repertoire as she gets further along, such as healing a heart of her own health by killing three enemies at once, though getting more attacks is conditional on clearing objectives and finding hidden objects to get orbs and unlock more potential. At the end of the day, it’s all very binary: run into the enemy to hit, avoid getting hit, sometimes take damage. 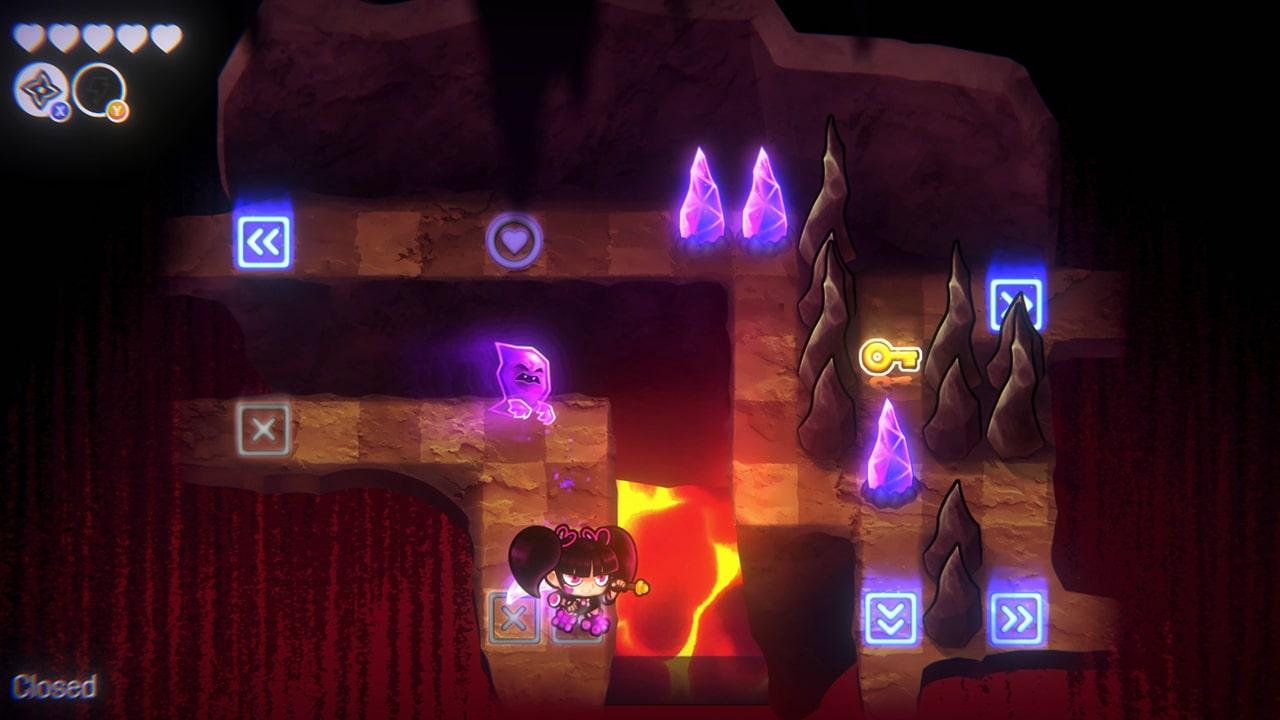 It took me a moment to realize that Keen: One Girl Army is very similar to Slayaway Camp in execution of game mechanics with the upgrade system being the noticeable difference. Kim also can move around blocks in order to make her own stoppage points, so that injects some extra difficulty into things, and that’s the big stopper for me in terms of enjoyment: difficulty. From the very first mission levels, I was unable to get all three objectives per world. Now, I don’t think that they’re set up unfairly or are impossible, but they do have a bit of a tonality to them that doesn’t seem to match the game’s atmosphere. Let me explain: Kim is this kick-ass ninja who’s fighting zombies, robots and even a crazy old warlock dude (great boss battle, by the way) in order to save people’s lives and stop a madman’s plan. It feels super energetic and fast-paced, but that’s literally not how it plays out. Every time you enter a room, unless compelled to do so by outside forces, you need to stop and look things over. You need to consider if it will be something in how you move or how the enemy will respond in turn. You need to move, then calculate what’s going to happen next. You burst into things like you’re Katana Zero, and then you have to plan it out like you’re Nobunaga and you want to have maximum victory. You need to adjust your mindset immediately in order to make the game work if you’re dead set on being a perfectionist.

Now, if you don’t mind missing the goals and just beating things by the bare minimum standards, then you’re in good company. Keen: One Girl Army has plenty around it to keep you engaged and entertained despite not being able to meet the marks. There’s extra expositional spots where Kim talks about her surroundings and makes offhand jokes and remarks that do make her endearing. The design of the world and characters is enjoyable: I loved the mixture of neons and darkness, of greens and blacks, of a very anime-inspired heroine with some pretty Western looking zombies and technology. There’s a great balance throughout, and I had a lot of fun trying to figure out which is the correct way to move through the building, to block laser turrets, to discover seemingly inaccessible corners and rooms. When you’re able to downshift and focus on what’s around you instead of what you should and could do, it’s really pleasant, and I think there’s a surprisingly good amount of game world to explore as well. The entire run is a decent length, and it essentially doubles or triples if you’re willing to go back and try to finish what you passed over in the first place. If you enjoy puzzle sliders, this is far, far better than Slayaway Camp in terms of longevity and core meat, though it doesn’t have the same kind of “pick up and play” since you often need to do several rooms in order to hit checkpoints, but the Switch provides with easy sleep mode and fast in/out mentality.

Keen: One Girl Army is hard, I can’t disguise that, but it’s not impossible, and it is fun and charming. If you’re looking for something with more puzzle than plot, but still plenty of the latter, then this has a great future ahead for action puzzlers the world over.

All the delight of a cute ninja girl with the additional complexity of well designed sliding puzzles and a strong replay value for completionists.