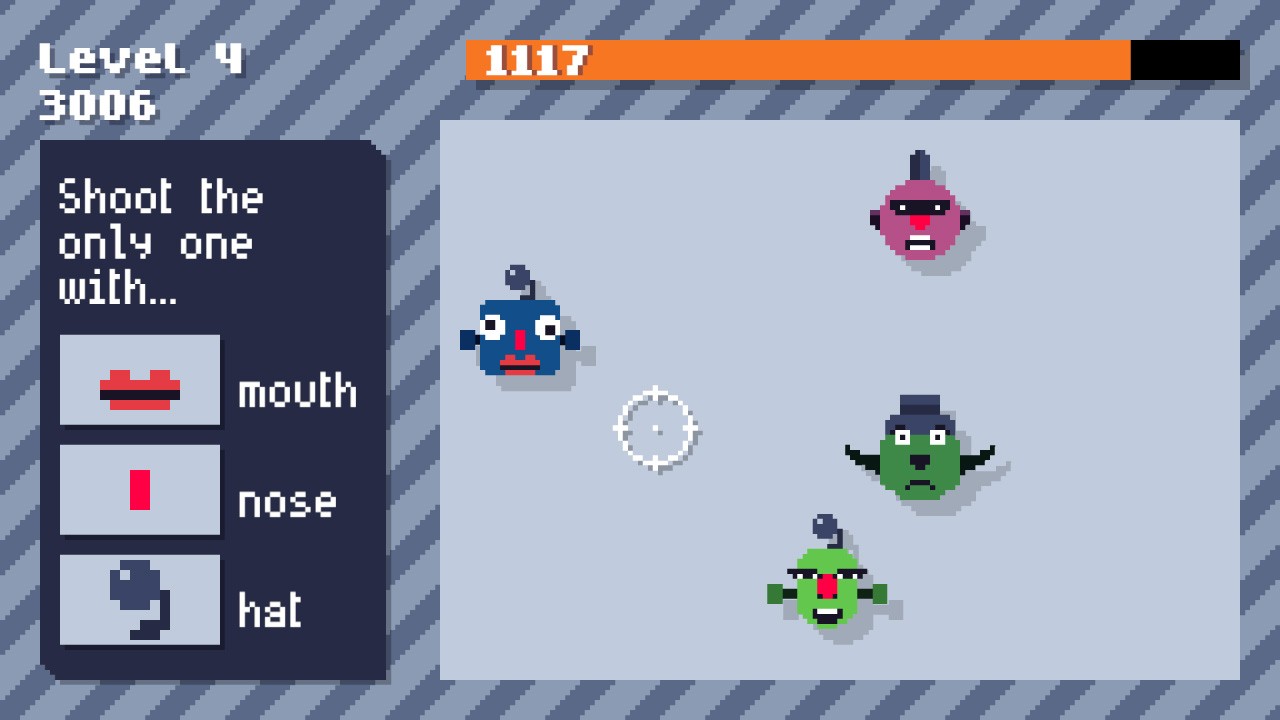 This week, for reasons that I can’t entirely figure out, I took a chance on a couple of smaller, virtually unknown indie games. Both created by solo developer Matthew Glanville, both of these tiny titles have been totally under my radar: it turns out they’ve been on Steam for a while, but never really made waves that I’ve been made aware of. Each, however, show a certain amount of glimmer, and I wanted to start with Singled Out, a fast-paced arcade shooter.

In Singled Out, you’re looking for an Intergalactic Criminal whose crimes are so heinous that we don’t dare speak of them in any capacity. All you need to know is that this space menace has to be put down, post haste, before there’s any chance of them fleeing and causing more suffering in the cosmos. However, because the Space Police have a very poor database about what makes up a criminal in need of street execution, you have only a few clues to tell you who the criminal might be. Also, this is your one and only chance: as the fugitive is trying to hide amongst innocent bystanders, you have just a few seconds to identify the outlaw and shoot them down. Get through thirty waves of baddies and then go after the criminal overlord and maybe stop crime forever! Shooting and killing innocents is, of course, frowned upon, and will lead to a game over, just like any other game or real life. 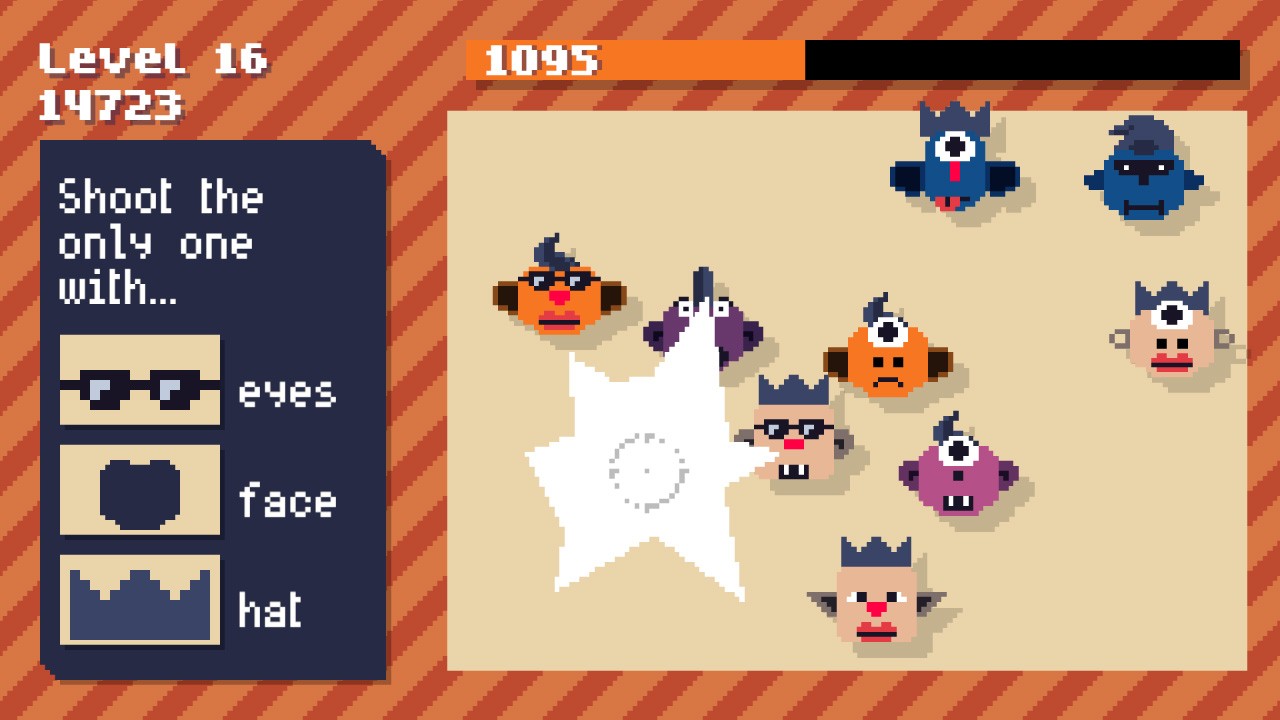 With Singled Out, I’ve just described the whole gameplay experience, so try not to get too worked up if you were hoping for more. Using either a joystick and button or simple touchscreen (touchscreen recommended), you get three hints as to who you need to shoot, and roughly ten seconds or less to take the shot. If you miss and hit no one, you have to wait a full second before taking your next shot. If you hit a bystander, you’re done, and killing the right dude means moving on to the next case, the next level. The hints have everything to do with their appearance, and only one person will fit all three criteria. However, there’ll be subtle differences that can throw you off if you’re not careful. Different ear designs might seem similar at first, so you need to train yourself to pick up on the smaller points. Hats can blend together if you’re not careful, and the small movements that the sprites make might trick you into thinking two head shapes are exactly alike.

The incentives to keep playing are small, but they help make Singled Out a fun experience. For example, there is a global leaderboard, and you can feel pretty good about cracking the top fifty for players, and I’m genuinely curious to see how much you’d need to get if you enter the top ten. As a gallery shooter, you’re judged by reaction time, so higher scores come from making quicker decisions, but that can also lead to more mistakes and, well, shooting the wrong people. The goofiness of the sprites are pleasing to the eye, so, repetitive as the whole ordeal might be, it works because the characters are different enough, and seem to be randomly generated based on some core criteria. Best of all, this plays out even better in the later stages, where the population density gets frankly insane. And, to top it all off, you’ve got a nice bank of achievements that keep you trying to get higher and higher scores and ranks. I also love that several of the achievements are hidden, giving you only the title to work with so you can try and figure it out on your own. 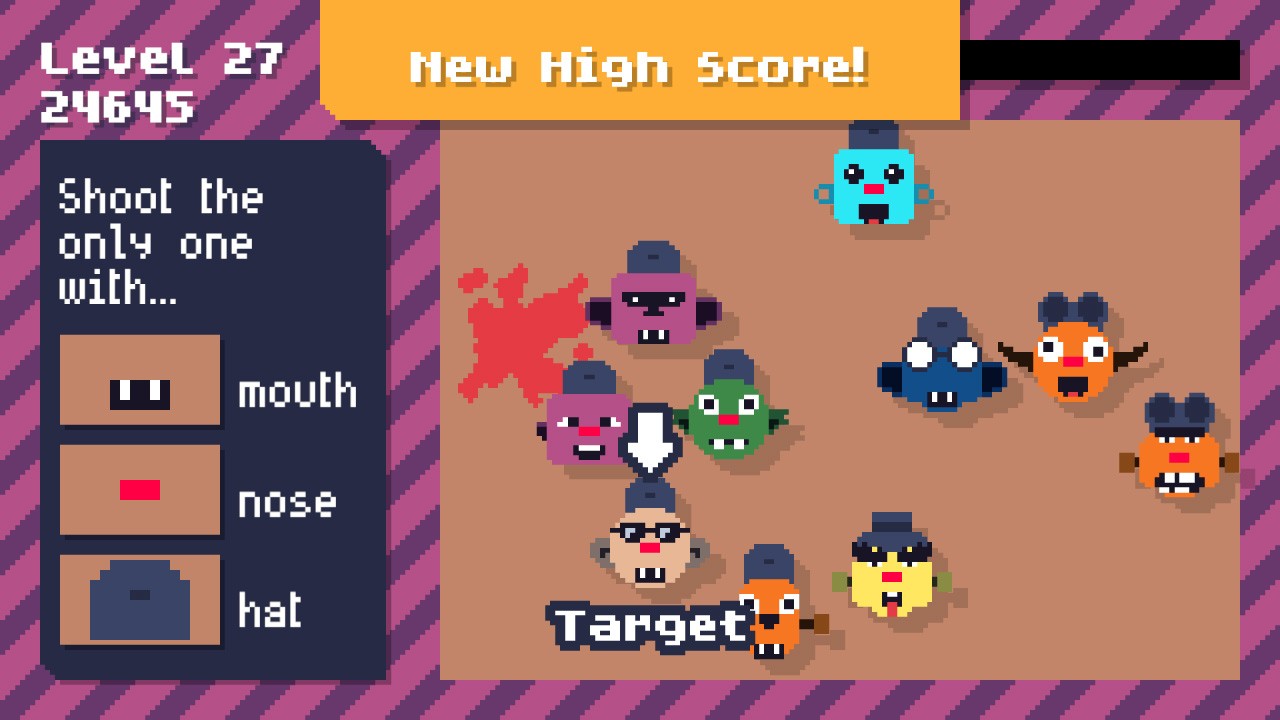 What makes Singled Out work is that it’s so damn polished. As silly as that sounds, this sort of small game has the potential to be shoddy, hasty and just thrown together with glue and a rubber band. Instead, you’ve got this simple title that flows from the moment the first initialization finishes. The change between the stages is fast and seamless, giving you just enough confirmation that you didn’t fail in the previous stage before hurling you into the next case. The number of personalities piles up on the screen until there’s nearly no room to move or discern one from the other, but there’s zero slowdown or staggering in either a good or bad shot. There’s genuine strategy as you need to train yourself to identify, compartmentalize the clues and place them on different potentials, quickly giving a binary reaction to either shoot or not, because time is running out and you cannot afford to waste a moment. It gets white knuckle the further you go, and that seems ridiculous, but it’s true. If you want to make the game work, you gotta work for it. Hell, the only downside is that the soundtrack is just one constant, almost ominous vibe over and over, with the sound effects piped in (which can be shifted in loudness), but that’s a very minor note on an otherwise good game.

The best thing I can say about Singled Out is that you get more than you pay for. Far too often, players are left justifying bad or even broken games by looking at the price and shrugging it off, figuring they “got their money’s worth” even if it was disappointing. Singled Out is more than that, showing off a good craft in a simple attempt that works and is entertaining. Anyone can play it, it’s just as good docked as handheld (though handheld has a touchscreen which I can’t stress enough is worth it), and it can easily be played for eight seconds or eighty minutes, depending on how determined you are to grab that top spot. Just remember to play this one at home: the constant attempts to call home for the global leaderboard can grate when played on the road.

Simple but effective, Singled Out takes the gallery shooter and lets the formula ride in style with a tight response and plenty of replay value.