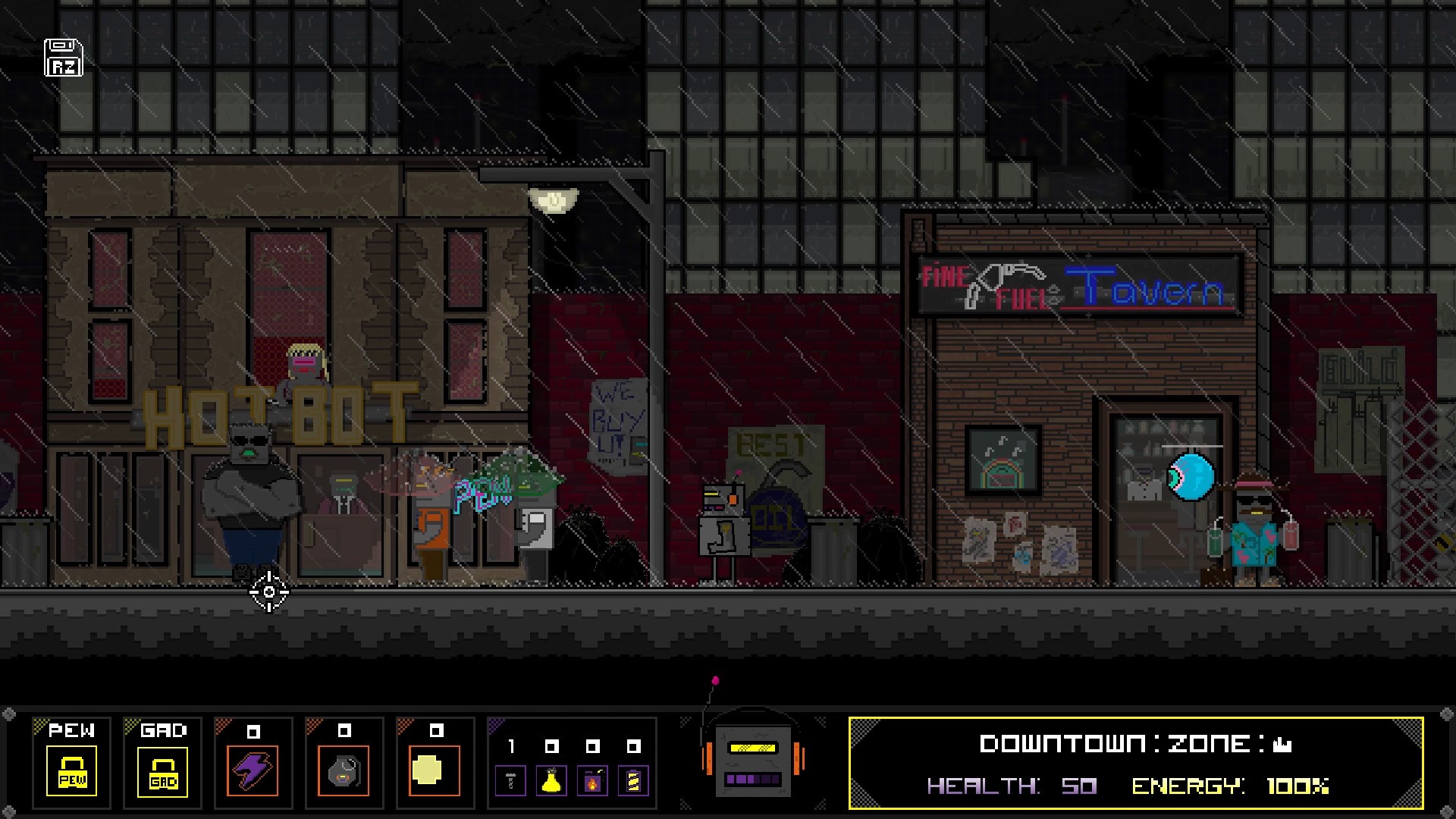 In an alternative world where robots rule the roost, we mere humans must hide. Our new overlords decide our fate. We only hope that they allow us to share their world with them. Dr. Zarro the robot founding father has long gone missing. You must solve his mysterious disappearance, while evading the attentions of “Monitor’s” minions. Robozarro is a physics based 2D action game. 2 robots known as B0-3 and 0-Ramatron must work together as they embark on a perilous adventure. Developed by Frozen Flame Interactive and Eastasiasoft and published by the latter.

Mech Angeles is the setting for this title. It’s a grey and bleak city where trust and friendships are a rare commodity. You control 0-Ramatron a robot who’s on a mission to help gather “Grams” supplies. His only ally is a small eyeball bot known as B0-3 he is the brains of the operation, and guides you every step of the way. The story opens with the robotic duo visiting “Fix & Chips” shop. Order collected and on their way home disaster strikes! “Chief” the eyes and ears of the evil “Monitor” questions your intentions. Thinking on their feet the robots tell a lie, this forces them to enter the sewer system. So begins their adventure.

Several worlds await you on your journey, each comprises many short lived stages. As you explore each area, you will find hostile robots who’d love nothing more than to destroy you. You must learn to control the power of your “Grab N Blast” tool. This enables you to manipulate your surroundings, turning junk into a deadly weapon. As the game progresses, you will unlock further gadgets and weapons. Each becomes available as the game mechanic evolves. The opening levels are straightforward. Shoot and throw items at your foes while you search for the exit. As things develop you gain a hook to scale shafts, and high powered lasers to destroy energy supplies. You get a shield which prevents death, but it has its limitations. Your energy levels mustn’t drop to 0, otherwise your shield will fail, and you cannot power your laser. Each worlds finale is an end boss. These hulking abominations enforce that you use your new found tools. These will overcome their defences, and will ensure that you are victorious. 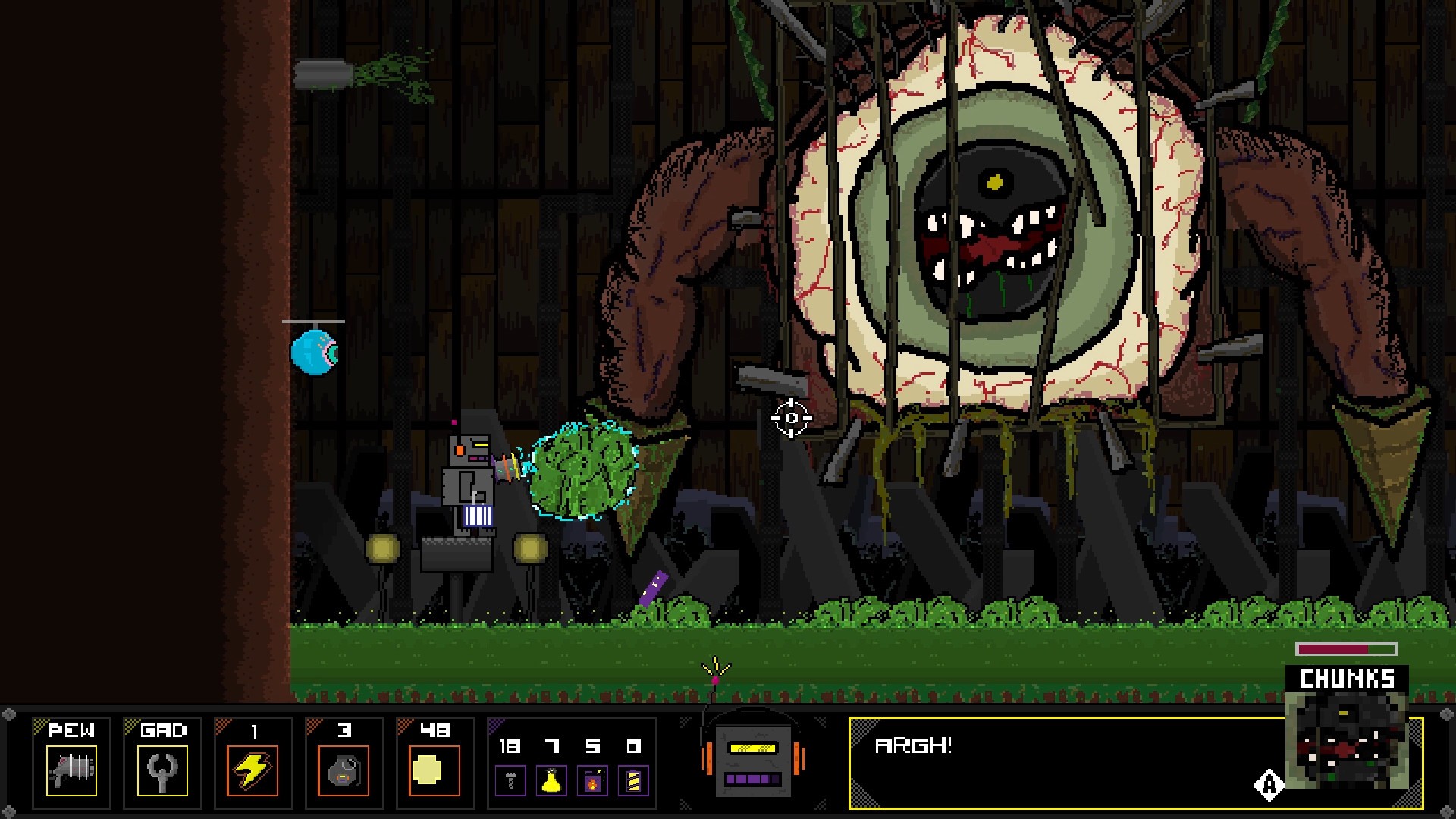 As you explore, you will find; bolts, wrenches, fuel, grenades and power to collect. At first it all feels pointless, you mow down your enemies with little issue, grabbing the odd item. During the latter stages your collection of amassed items becomes important. You will find vending machines in a variety of locations. Using them allows you to buy; health, energy shots, rapid fire, and grenades. If you skip past them and go into battle unprepared, you are likely to lose your life. Talking about dying and losing your life, this isn’t that much of a set back. I found it inconvenient as you’d lose a little progress, and you’d spawn at the most recent save location. You’ll discover these throughout each stage, so at worse you may have to repeat 1 minute of gameplay. This reduced not only the difficulty of the game, but also the fear factor. I found that I’d run into any area all guns blazing with little thought about my safety. If you are a gamer who likes to plan and create a strategy, you’ll find that this will be a little too gung ho for you. I used trial and error as my way of progressing and learnt from my many mistakes.

As of late, I seem to reviewing only indie titles, this isn’t a bad thing as I enjoy them. It feels like Groundhog Day for graphics and audio. Every developer appears to use the Mega Drive and SNES as an influence. 16Bit graphics with vivid colours are all the rage. Robozarro is no exception. The sprites are well designed, and the levels look good, and are well designed. The animation of characters and traps are smooth. This makes navigating the stages and dodging enemy attacks much easier. The delivery of all instructions and narration appears in text form. I enjoyed the delightful white characters appearing on a dark background. They are reminiscent of gaming on the Amiga or Commodore 64 and suited the game’s art style.

In a game that is all about the action and adventure you’d expect the audio to be upbeat, and to drive a sense of urgency. This unfortunately isn’t the case. A repetitive and innocuous tune plays throughout. This changes when you encounter any major event. The shift to a more dramatic tone is minor and doesn’t add much to the atmosphere. The opportunity to make a fun and adventurous soundtrack was there. Yet, the developers overlooked the chance, and played it safe. This is also true of the sound effects. The weapons and gadgets could have some wacky noises associated with their use, but it was plain. The audio isn’t terrible; it fails to wow you, and you feel a little underwhelmed by its existence. 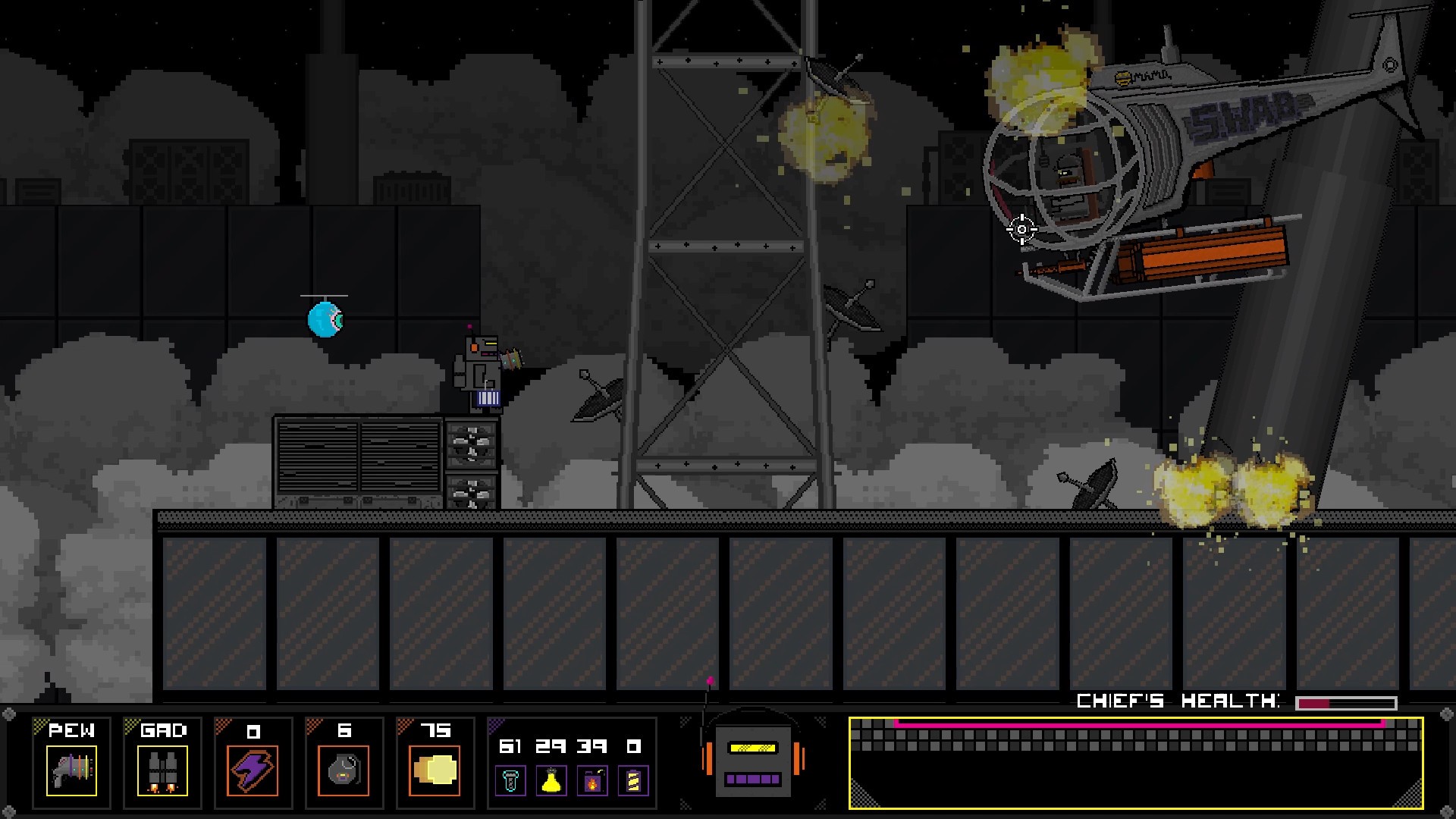 If you have read any of my other reviews, you’d know that I’m terrible at twin stick shooters. My brain cannot contemplate the control methods, and I give that genre a wide birth. Now, Robozarro uses this method, much to my dismay. I had to put on my “Big Boy Pants” and work through the pain. Luckily, the pace of the game isn’t that fast, so even for someone as rubbish as I am, I could cope with using both sticks. Not that I don’t have several gripes about the control setup. You select the weapons and gadgets from a radial menu, using the right analogue stick. This was alien to me, and I spent most of the time trying to select items with the left stick. It may sound small, and petty, but, it was annoying as heck. I had to always think about what I was doing, rather than being able to relax and play. The developers should have allowed an option to adjust the controls to the players’ needs. For me, none of the controls were intuitive, I felt like I was never familiar with the setup. This may be because of my disinterest in the genre, or lack of skill, you may not encounter the same issues.

Several indie titles that I’ve tried are great for the first run, but don’t deliver on any replay value. They offer no NG+ mode, no challenge to gain the achievements, and no reason to return. Luckily, that’s not the case here. Once you complete the game, you unlock time trials. You must repeat each level without checkpoints, and you mustn’t take any damage. This new spin makes for a much more challenging experience. It went from being fun and a serene walk in the park, to a bite your bottom lip, and keep your frustrations under control. This title hides a sinister secret, one that will drive you mad, and make you angry to the point of rage quitting. It’s always odd when a game allows you to complete the full achievement list, having not finished it. If you are a gamer who seeks easy 1000 Gamerscores, then you will be happy to have discovered Robozarro. 30 minutes and you’re done. If you fancy completing the full story, then around 4 hours is all you need. It’s not the largest title you’ll ever play, but the extra time trials will add further gameplay.

This is a game that plays everything safe, nothing breaks new ground, and all feels familiar. The developers have used a tried and tested formula, with some interesting twists. Using environment manipulation was fun, it added extra elements to the gameplay. But it made the controls clumsy, and cluttered. The arsenal of gadgets and weapons keeps you thinking, it forces you to mix up your style in each situation. I liked the flow of the story, and as a fan of retro games, I loved both the pace and the look of this title. The question that is most relevant after all this is, would I recommend it? Yes. It’s not a standout performer in its field, but it provides a solid experience for at least 4 hours. It delivers good value for money, and the time trials will keep you coming back for more. Can you and your robot friend solve the mystery of Dr. Zarro? Only time will tell!

Can you and your robot friend solve the mystery of Dr. Zarro disappearance? Only time will tell!