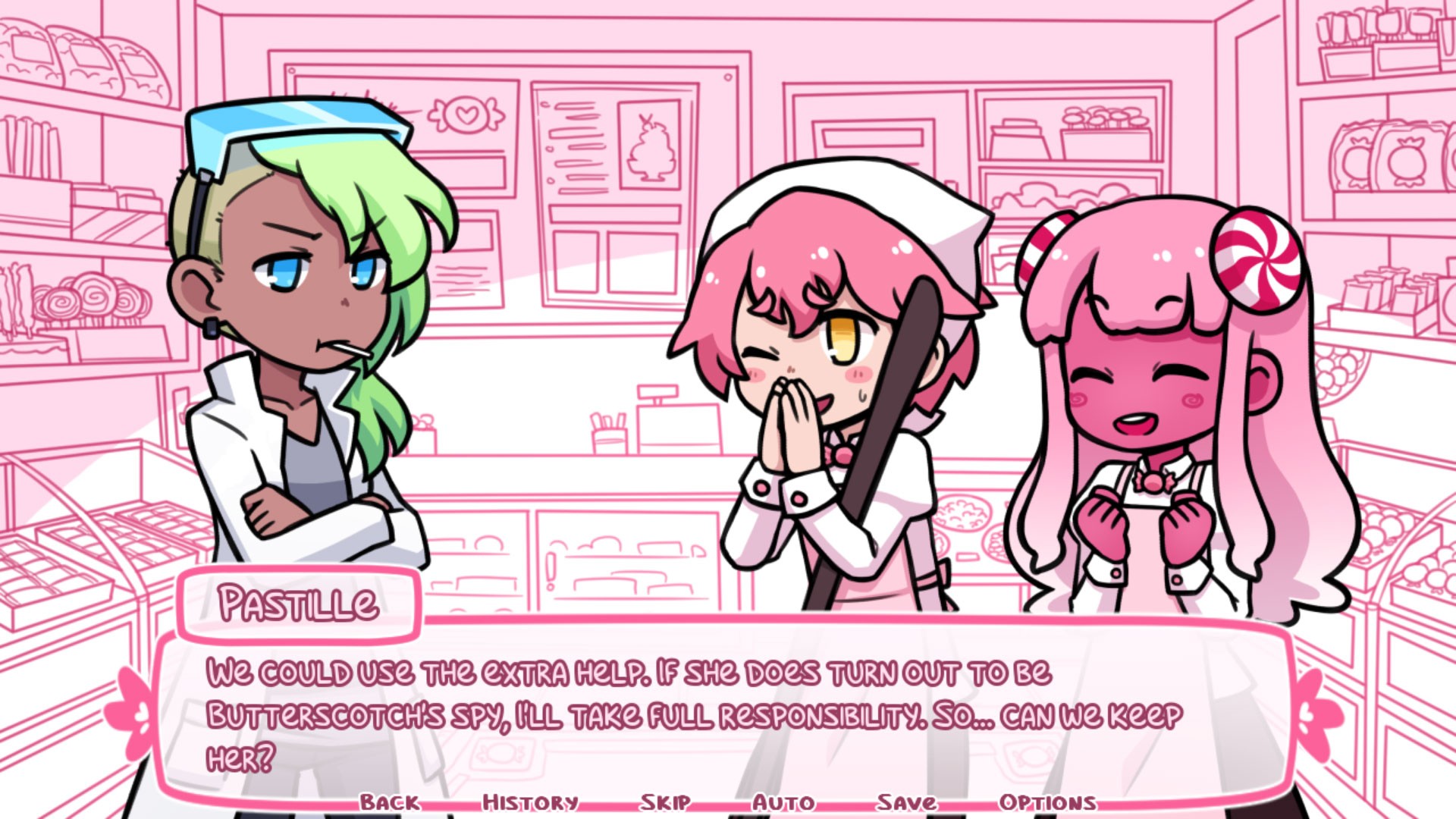 Syrup and the Ultimate Sweet is a visual novel featuring the story of Syrup, an old-fashion alchemist who stubbornly stands out in a world that has turned to magic because of her adherence to the good old scientific process. She’s a bitter and disillusioned woman whose single friend in the world is a young man who works in the candy shop she owns and runs. From the very beginning, it’s obvious that Syrup doesn’t care about the opinions of others, often at the risk of causing offence, and she frequently butts heads with the witch, Butterscotch, her rival in candy making. Will your story have a happy ending in which Syrup discovers the value of friendship, or will her cold heart lead her to a lonely existence—or worse?

Syrup and the Ultimate Sweet is an adequate title, given how utterly saccharine the character interactions are mostly. While there isn’t a lot of locations or a huge cast, developer NomNomNami can still flesh out a 3-Dimensional world. Syrup and the Ultimate Sweet feature a tale about developing interpersonal relationships, swallowing one’s pride, living in harmony despite one’s differences, and finding the strength to accept oneself for who they are. If I didn’t know better, I’d say the ultimate sweet the title refers to—and brace yourself because you’re about to groan—is friendship. 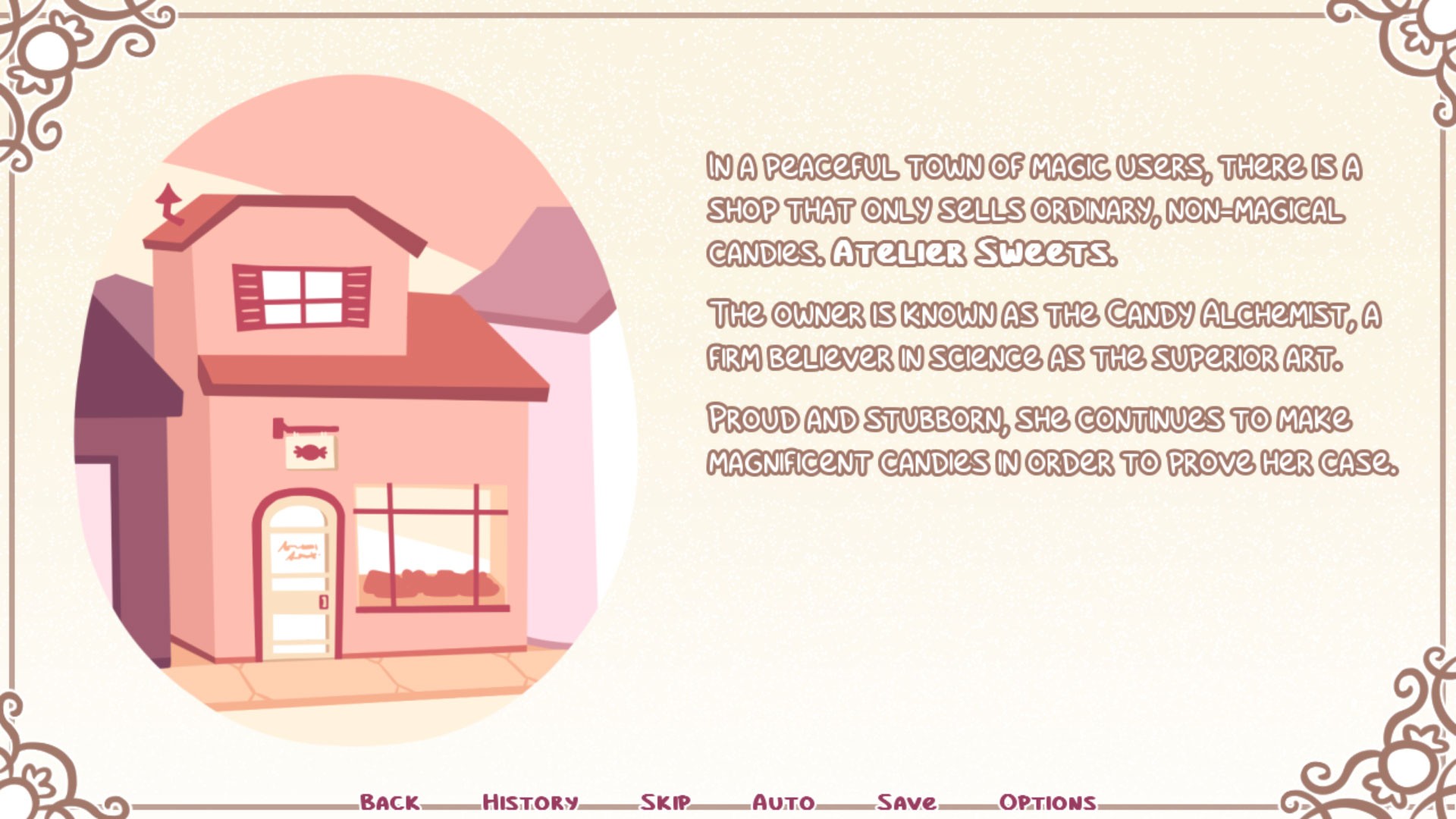 Syrup and the Ultimate Sweet has all the bells and whistles you’d expect from a visual novel such as options to skip read text and the ability to save at any time. Also included is the night ability to rewind, so that if you don’t like the outcome of your decision, you can just hop back and make the opposite choice. All decisions save one comprise “do this” or “don’t do this” and mostly it’s pretty obvious what kind of outcome your choice will have on the plot. I appreciate that some happy endings stemmed from a chain decision early on, making them less obvious to achieve. There are multiple save files available, which become handy if you want to go back to a turning point in the story after achieving an ending because rewinding becomes unavailable after that happens.

The controls are straightforward and simple, though I have one complaint about the pause menu. First, there’s no one button that allows you to perform a quick save; instead, you must open the pause screen and then go to the menu. This isn’t an issue, except to navigate to the actual save screen takes a few more button presses than necessary, leading me to believe that the menu didn’t translate well to access via the controller. 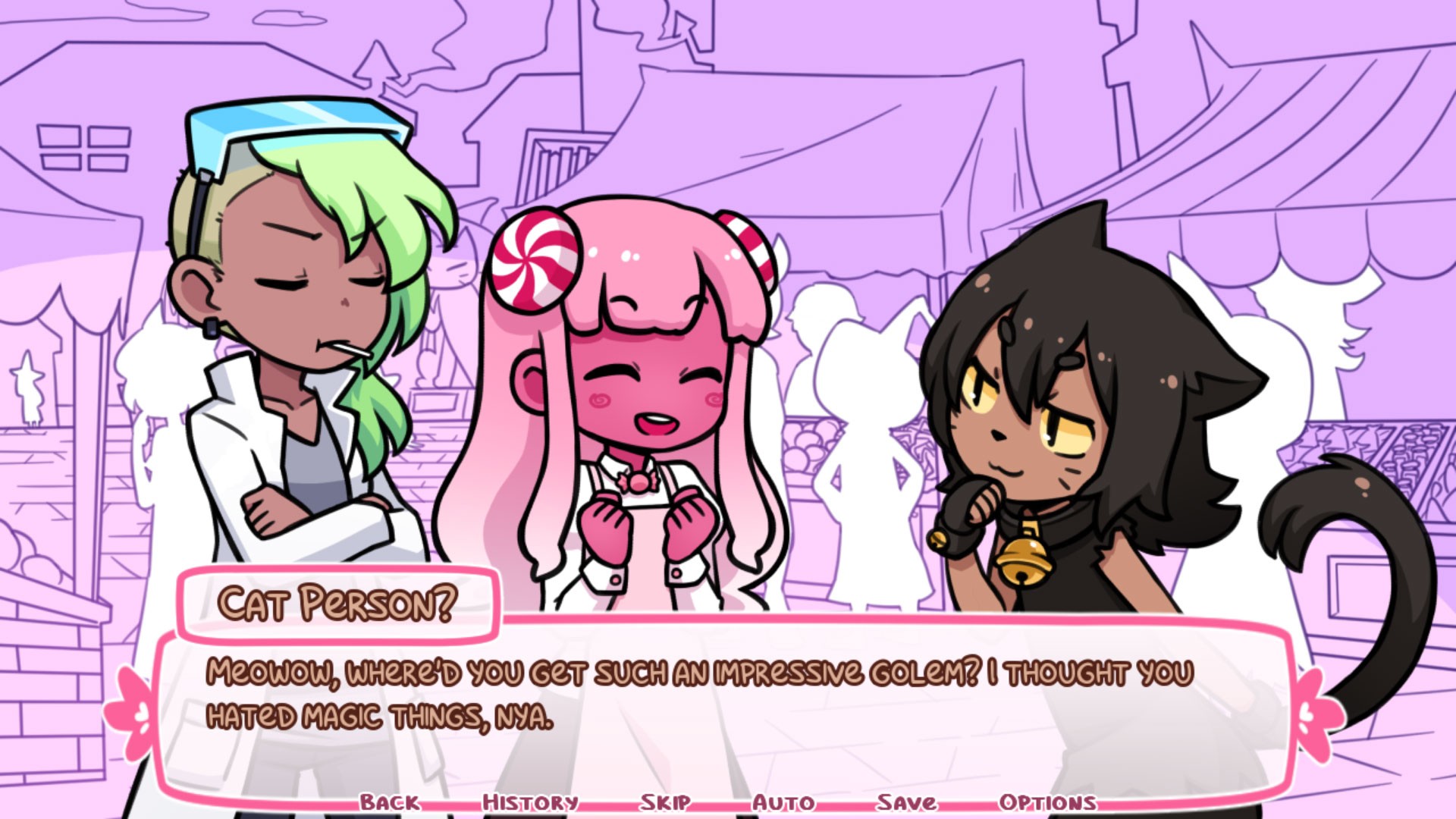 Syrup and the Ultimate Sweet’s adorable anime style are lovely to look at and the pastel colours of the text box and the cute font tie together a polished presentation. The characters are named after candy and other such sweets and the upbeat soundtrack and the bright colours are thematically strong.

But don’t be fooled by appearances. Syrup and the Ultimate Sweet have its share of feel good moments and macabre ones. The candible ending, which can be achieved rather early on, is a perfect example of that. No spoilers, but if you put the words candy and cannibal together, then you’ve pretty much figured out what happens given that one member of the cast is a magical candy golem.

It took me maybe two-and-a-half hours to play through all ten of the available endings. The fact that the characters on the title screen changed according to the ending I achieved was a nice little attention to detail. Given that this is a visual novel, it has all the replay value you’d expect (i.e. none), but for such a cheap asking price, it’s easy to recommend an afternoon with Syrup and the Ultimate Sweet for the simple pleasure of seeing the story through to the end.

For only $4.99, I can’t argue with how much content Syrup and the Ultimate Sweet offers—particularly if you’re the type who wants to see every ending. The writing is very good and, though the menu controls are a little wonky, it takes nothing away from gameplay.

A short but sweet visual novel. The story is strong, but the controls are wonky. Get lost in this colourful sweet driven world.