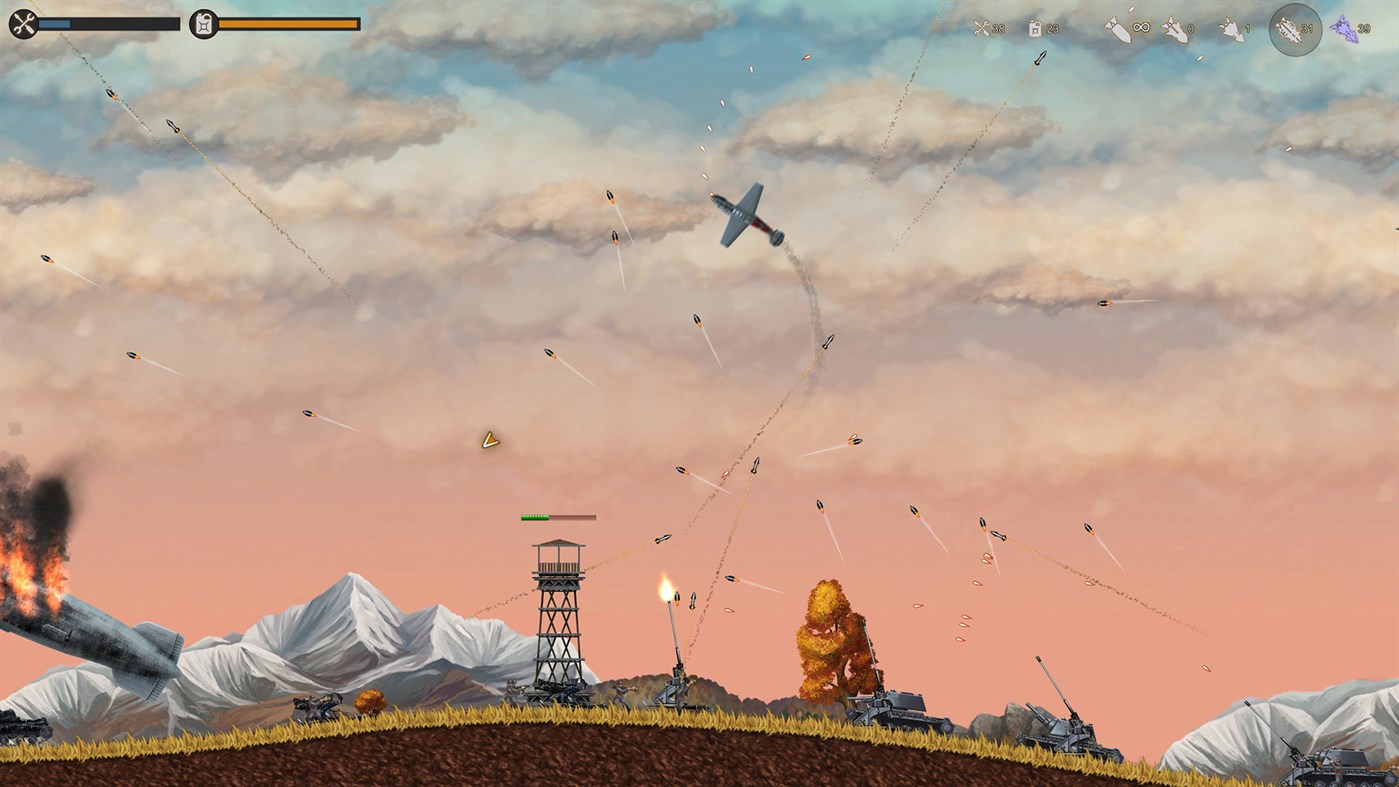 There is no doubt about it, being a fighter pilot is cool as hell. Flying multimillion pound aircrafts at 650mph and flipping off a Russian pilot. What could be better? The idea has been romanticised in films and video games for decades: Top Gun and Wings of Fury to name but a few. It intrigues me when a new game uses the theme. Will it be a repeat of past glories, or will it look to create its own twist on a much-loved genre? Satur Entertainment has developed and published Aircraft Evolution. A 2D classic side-scrolling dogfighting game with a modern aesthetic.

Set across 4 different eras; World War I to futuristic battles. You take on 40 different missions of wanton destruction, obliterating everything in sight. You must blow up enemy structures, bomb armies, engage in dogfights, and win big boss battles. It’s all mindless fun! It requires you to glide above your enemies, dropping your arsenal of deadly toys on their heads. Each stage doesn’t take particularly long to complete. You should dodge the barrage of projectiles sent your way and get aggressive. You know what they say, “The best form of defence is attack!”

The game starts with you flying a basic wooden plane. The slow and cumbersome aircraft gets you through the early stages. I know what you are thinking. “I want to pilot cool futuristic fighter jets, not ancient wooden bi-planes!” Patience, all the big aircraft are available and unlocked in time. While you wait to unleash the beasts, you have the chance to upgrade your current ride. Increase its: armour, speed, fuel, firepower and more. That wooden shack with wings isn’t so bad. The new planes are also available with restrictions applied. You must have enough credit and have advanced enough levels. You earn cash during each stage, destroying anything rewards you with a bonus. The bigger and harder the opponent, the more you’ll get paid. The same applies for experience to level up. The progress is slow going, and it would be fair to say that the early part of this title is a grind fest. Fun, but requires a lot of grinding. 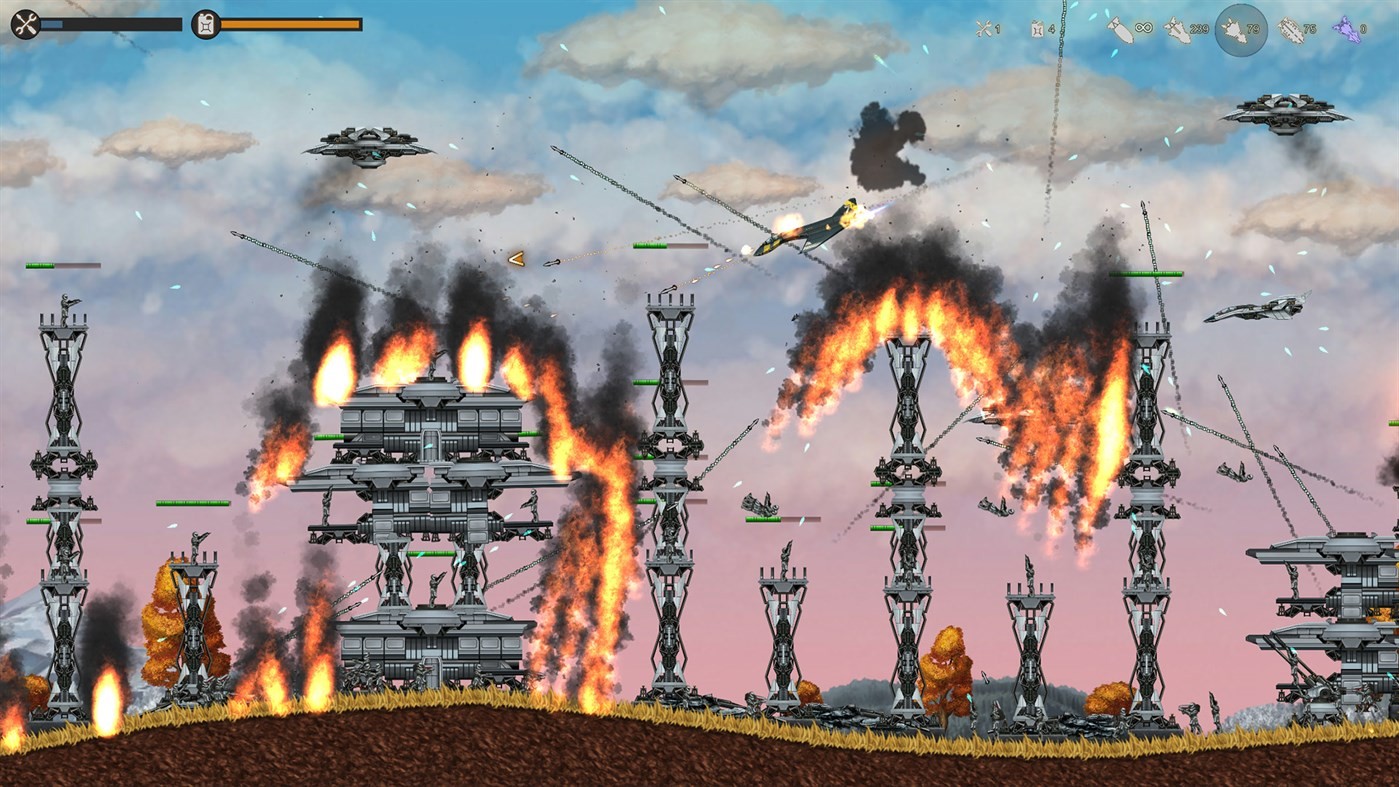 You can upgrade and buy a new plane, but what about the weapons? Can you improve those? Yes, you can! The basic arsenal is an on-board machine gun for aerial combat, and single bombs. Sounds cool, right? Once you have a taste of the high-powered weapons, the vanilla one’s won’t make the grade. “Tell me, where can I get these improved weapons?” You have 2 options; Loot crates with fuel, armour, and munitions will fall from the sky during each mission. They will replenish your stock and make you powerful beyond your wildest dreams. But, if you don’t wish to take a chance, or you are impatient, you can buy all items from the game shop. The cluster bombs wipe out troops and causes vast damage to buildings. It’s a great way to speed up any attack and reduce risk of personal damage. Then there is the Super bomb. This is a game changer. Dropping one of these causes untold damage, flattening buildings, and decimating armies. They don’t come cheap, but they will turn the tide of a battle in your favour.

The eras pass by, and the technology increases. As does the difficulty and the enemy skill level. You must keep ahead of this curve by upgrading your aircraft as soon as possible. If you fall behind, it’ll make progression difficult. I found that this clear from around level 20. This is the start of the third era. The enemy pilots are as manoeuvrable as yourself. They have kamikaze tendencies, which makes them dangerous. This was an element that frustrated me. It felt unbalanced and unfair. Up to this point, the difficulty was about right. This reduced the fun in the later levels. The developers should look at adjusting this.

The best part of this game is the classic feel and style, but with modern graphics. So many developers create pixel based products to match the retro theme. Satur Entertainment didn’t follow this new “norm”. It’s a credit that they have created such an interesting title to look at. The vehicles cut clean and crisp lines against the backdrop. The environments are interesting and vary from stage to stage. Using different in game assets compliments each era. This prevented the gameplay from getting stale. The animation of the vehicles moving across the landscape is smooth. This was impressive, as I expected it to suffer frame rate issues. Many vehicles and projectiles move across the screen at once. The action never slowed down, nor did the gameplay suffer, as I thought it may.

The visuals may be modern, but the audio has that classic nostalgia inducing beat. It’s reminiscent of an 80s action film. The synthesised tunes aim to up the tempo which increases the energy in the game. I have to say; it works well. It may be clichéd and cheesy, I didn’t care! It matched the style and theme. The brilliant sound effects bring the game to life. The hum of the engine was a joy to listen to, and the exploding bombs made the action much more brutal and exciting. 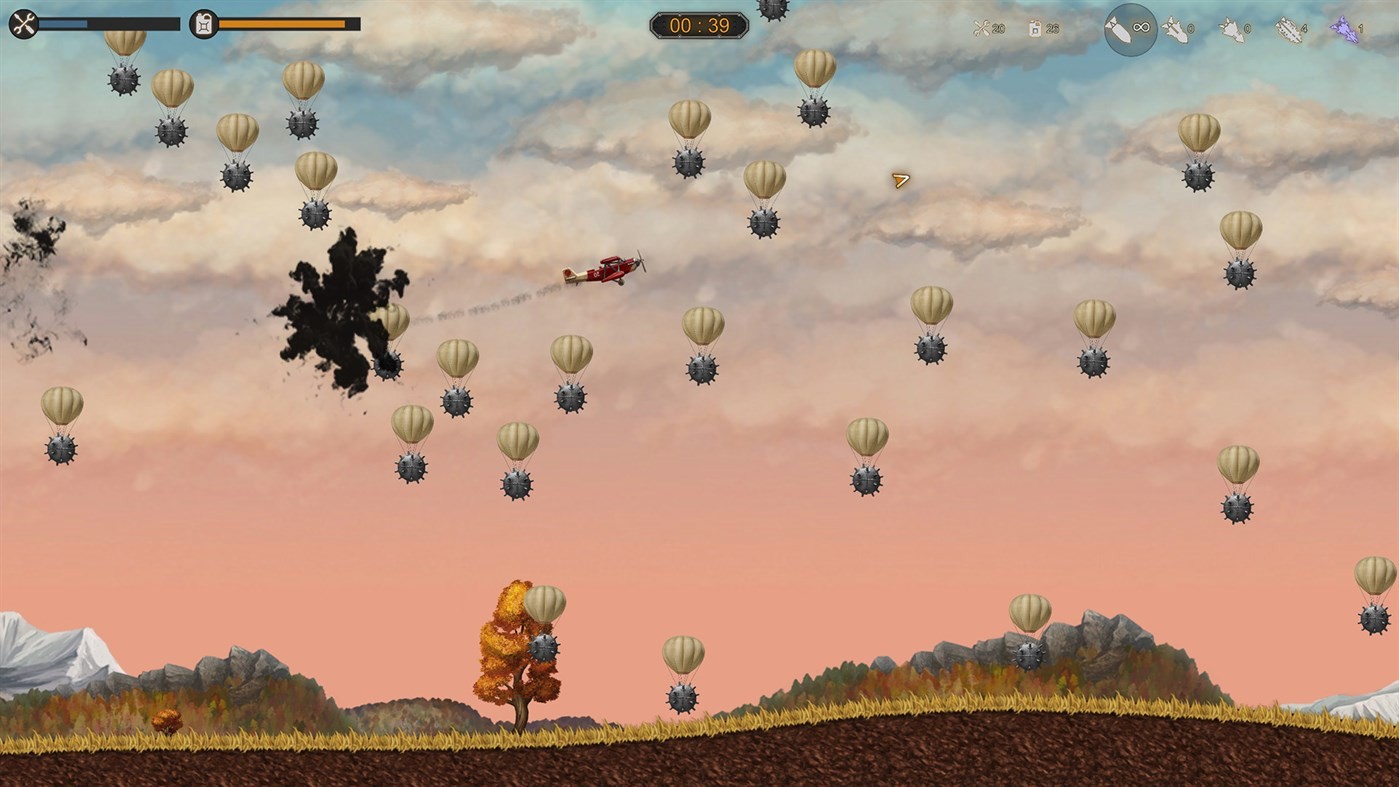 The control system is a bit of a mixed bag. The early era planes have terrible controls. A poor turning circle, and sluggish response. This makes the opening missions harder than they should be. As you change planes and upgrade parts, this eases the issue. It’s something the developers should tweak to improve the balance in the early part of the game. Other than that, the game is easy to control. A simple button layout, and responsive input times allow you to have plenty of fun.

There are 40 levels to play, and plenty of aircraft to choose and upgrade. You’d be right in thinking you get a lot of value for money. But will you want to play it again? There is a lot of fun mixing older vehicles with futuristic weapons. My old wooden plane bombing plasma tanks was fun, yet that even got repetitive. You can complete the achievement list by grinding kills, and natural progression. But this won’t hook you. A lack of multiplayer was disappointing, as it would have been a great addition. So what will keep you playing? The casual experience and mindless destructive fun, that’s what! Planes, tanks and explosions, what’s not to like?

Aircraft Evolution is a fun and casual side-scrolling shooter. It combines 80s retro gameplay with explosions and great graphics. The clichéd audio, and a variety of aircraft and weapons, keeps the energy high, and the gameplay fresh. 2D shooters are two a penny, it’s rare to find one that stands out. Yet, the developers have succeeded. If you are looking for a fun and casual mindless game that will fill a void, then I’d recommend this. Grab your aviators and flight jacket. Pick an era and take your plane for a spin. This is a dogfight with a twist.

Grab your aviators and flight jacket. Pick an era and take your plane for a spin. This is a dogfight with a twist.