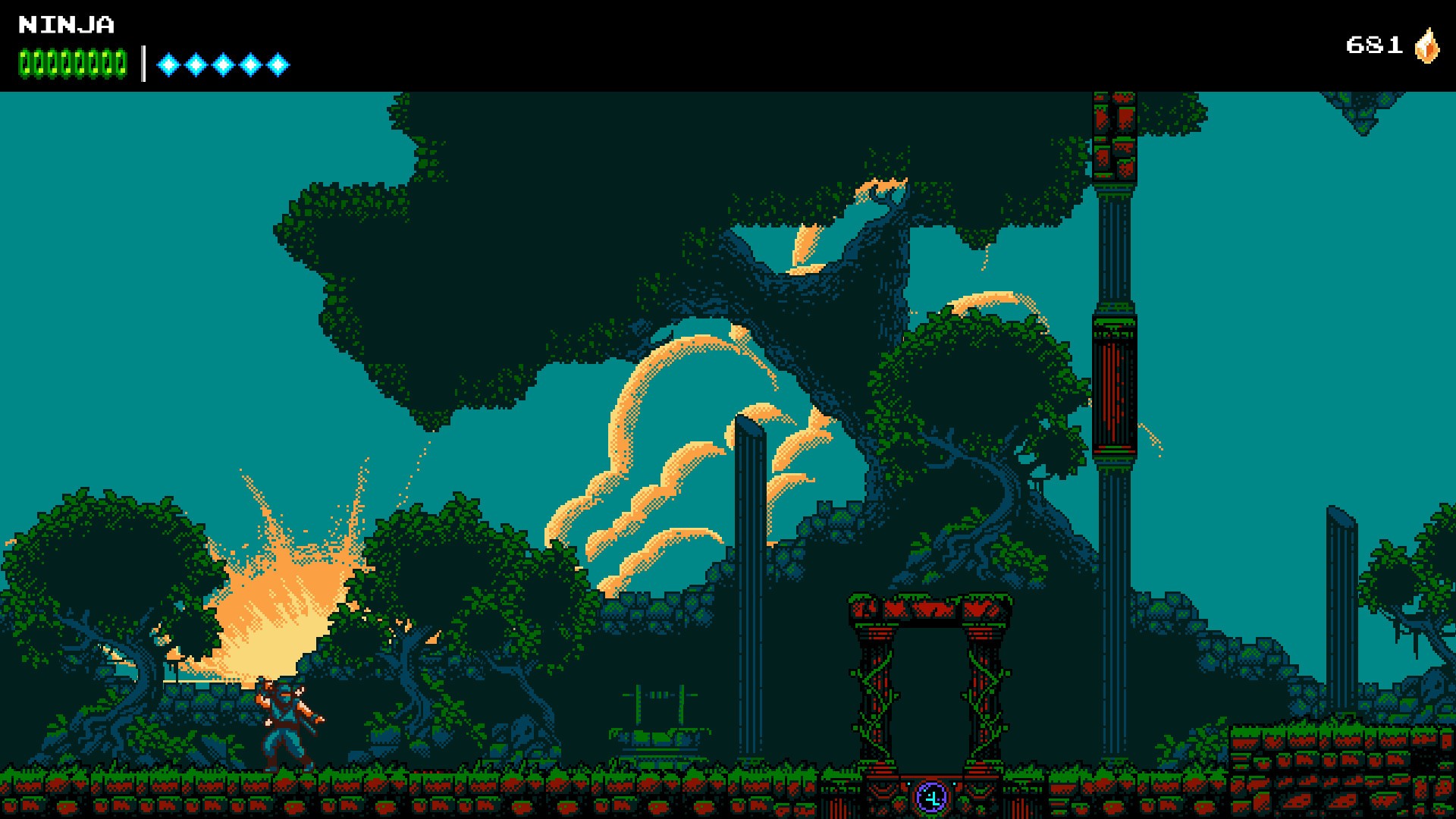 One thing that Devolver Digital has always been great at, love it or hate it, is subverting expectations. Every time I go into a game that has their stamp of publishing approval, I end up getting more than I bargained for. From Enter the Gungeon becoming a monstrous challenge in practical dodge-rolling to My Friend Pedro being a symphony of chaos to Katana Zero being one of the most mentally exhausting journeys of the year, it’s always a delight. Now, I’m delighted to have dived into a game from a smaller studio called Sabotage Studio, who has since set off from Devolver to work on their own independent publishing in the not too distant future (genuinely intrigued for Sea of Stars)! But before we get there, we take a step back and look into their flagship title, the one that brought us all to full attention with the Xbox One release of The Messenger.

You are The Messenger. A ninja from a village clan, you have been training your whole life to wait for the Western Hero to reappear and show you all the way in the battle against evil. When evil shows up a tad early and kills everyone but you, it’s only through sheer luck and timing that the Western Hero finally appears, albeit a tad late. But now you’re tasked with delivering the scroll in order to inform the sages and potentially save the world from evil demons. Giving nothing away, I will say that this baseline plot that feels a tad generic is quickly stripped away, and the first half of the Messenger and the second half are wildly different in story, but it’s worth seeing and not just reading about. Seriously, I know this game is a couple of years old, but don’t spoil it in trying to find out the storyline and stuff, because it’s fun and actually really well executed, and knowing the turns will just make it boring.

The Messenger plays out in two different ways, and I will spoil this just a bit for you in order to help temper expectations. For the first couple hours, when things still make sense, the gameplay is an action adventure title, not completely linear but still fairly straightforward. You have to go, attack enemies, collect droplets to buy upgrades, and make sure you don’t die in the process. Besides your sword, there are two important additional elements. The first, which actually comes later, is the Shuriken that you can unlock as projectile weaponry. These are super helpful and important, because there will be times where ranged damage is so much better than up close and personal, though your Katana will make short work of any and everything that comes your way. The second is your “cloudstepping,” which is the act of being able to hit something with your sword in order to add a second jump to your action, and this can, in theory, be looped infinitely with enough things to hit. The cloudstepping will always be the best thing you can do, even as you learn to climb walls, sail through the air like a glider and pick up a grappling hook. I personally think the shuriken is more versatile and more important than the grappling hook, so that’s why it’s listed as other and not an important piece like cloudstepping.

The second act of Messenger is…well, it’s weird, but exceptionally cool. Giving nothing away, the game takes a sudden turn in direction, but not a 180. You’re still adventuring and actioning, but now you’ve got a heavier exploration motif. You care so much about the map and making sure you’re exploring every nook and cranny to make sure you aren’t missing anything. You need to consult and make sure that the path you’re taking makes sense, and to double back, respawns be damned, to ensure that no stone was left unturned. Some might call it Metrovania, but I feel like there was something missing to really cement that idea, so I just leave it as “exploration.” There’s also this whole thing with two levels on top of one, but I’ll talk more about that in just a moment. 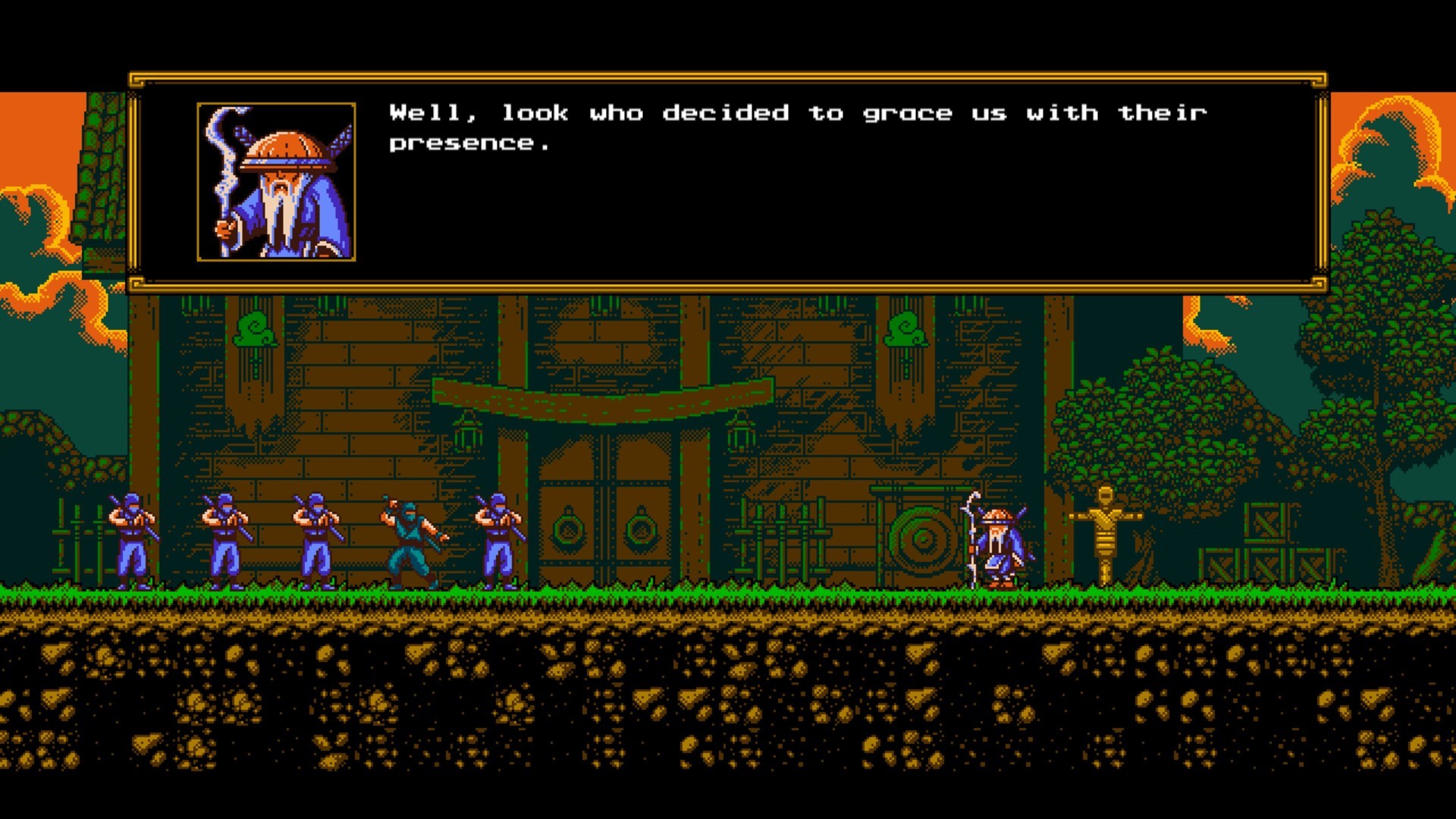 With the Messenger, tightness is essential. Being able to master and calculate your movements early on and understand the physics of how your character move are key to creating some of the smoothest action that you can imagine from a game that looks like (initially) it was born for the latter half of the 8bit era. As you engage and discover more about how you handle and unlock additional move-sets, the game evolves with you, and you become more attuned to how you can slash through enemies and targets, collecting and keeping yourself alive with as little damage as possible, and drinking in the rich, detailed environments that crop up at every turn. It’s also worth noting that you never die, even though it gets quite hard: a little demon dude named Quarble is watching out for you, and he will save you from death at the last minute, teleporting you back to the last checkpoint and then “billing” you by stealing all the droplets you collect in the future until he feels the debt is repaid. The Messenger has a long journey ahead of him, and the heaviness of it all is balanced out by some absurd and genuinely funny elements.

It’s moments like these that I’m glad that game developers have leaned into having humour in a game that might not necessarily call for it, because The Messenger is full of amazing, ridiculous moments of exposition and dialogue. Realizing a boss that you’ve beaten wasn’t a boss, but just some dude trying to do his job when you barged in. Arguing with a shopkeeper until he forces you to hear a drawn out story of philosophy, complete with disabling the ability to advance the text faster. Listening to two rather large and formidable NPCs conversing with what sounds like Shakespearean-grade discourse before the crap hits the fan. As much as you need to stay focused and alert, there are these wonderful segments that make it worth stopping and relishing the game instead of just bum rushing through it.

An added perk also is that The Messenger wears two faces for the purpose of the plot which, as you may have guessed by now, has something to do with things going wrong, terribly wrong, and you end up with a bit of a potential paradox on your hands. This is where modern gameplay technology takes over and makes sure that retro doesn’t just mean “could have been on a system that’s 30+ years old.” The game shifts suddenly from 8bit to 16bit inspired designs, and it’s almost breathtaking to see the transformation and how the same enemies and the same environments can appear totally different through a newer filter. The colours and the smoothness pop in a different explosion of detail and being able to find gates where the same worlds will shift between the old and the new are freaking fun and fantastic. It never loses its lustre, and it’s always a visual treat to behold, especially with the weight of the XB1 doing some lifting to make what could be a very simple game look expensive.

For achievement hunters, there are plenty within The Messenger, with some coming very easily (you beat the intro!) to some being intuitive (you hit an enemy projectile!) to patience and precision (you did fifteen cloudsteps in a row?!). Not only that, but there are some that come from mysteries about the game, and do require a certain amount of curiosity. For example, there’s one achievement you’ll never receive if you never die, which, don’t worry, that’ll be an easy one to nail. But others require deliberately not doing what others tell you sometimes, and this even extends to the Picnic Panic DLC (which takes place after the game as a fun sort of after story). You’re looking at close to fifty achievements from start to finish (DLC included), so crack your knuckles and get ready to try to trigger a bunch of random ass events through playing the game well and also just stumbling into nonsense. 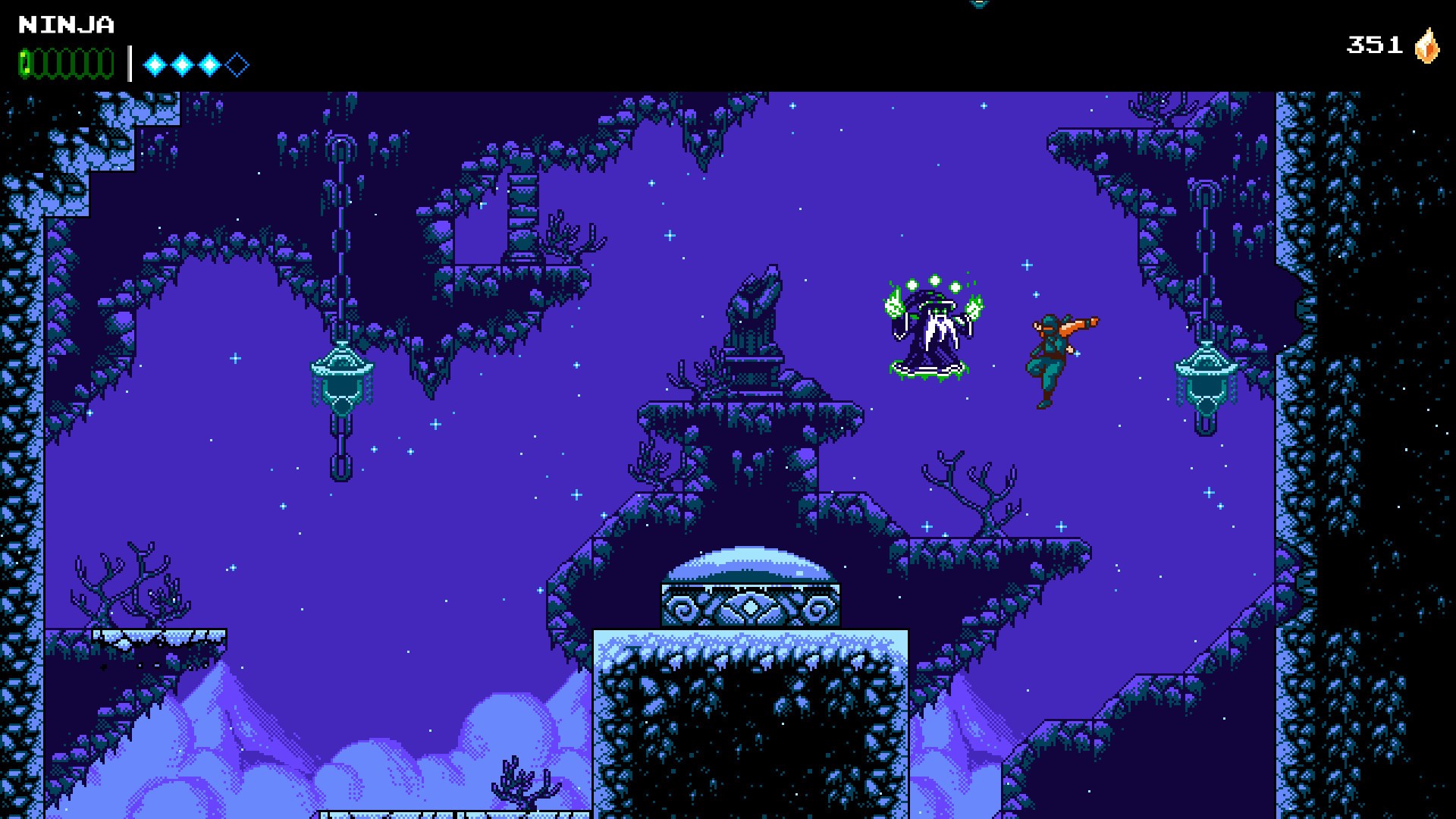 Lastly, I would be severely remiss if I didn’t mention the soundtrack for The Messenger. Rainbowdragoneyes went above and beyond the call of duty with this one, and it should be a marvel to behold from start to finish. Not only is the soundtrack made up with a proper chiptune sequence to make the whole game shrouded in energy, atmosphere and mysticism, it’s also balanced in both 8 and 16 bit tracks depending on the reality you’re in. Imagine recording a song, making sure it sounded good on vinyl, and then going back and remastering it from scratch to also sound good on CD. That’s the level of effort that went into this soundtrack, and it’s unbelievably marvellous. Even how it’s mixed into the environments is impressive: if you go underwater, even for a moment, the music becomes muffled and distorted with a fantastic level of awareness to how this might sound when you’re submerged.

From start to finish, The Messenger continued to keep me enthralled through well-designed stages, massive boss fights (and I mean some are frigging HUGE) and twists of both the humorous and shocking degrees. Therefore, we celebrate smaller developers. There are wonderful ideas in the minds of people who don’t work at giant studios, and sometimes we just need to give them a chance to tell their tale. The Messenger will take anywhere from a couple of days to a week to beat, and I promise you there won’t be a dull moment.

The Messenger is such a solid, action-oriented platformer that I can’t believe it also made me laugh, gasp and roll my eyes while trying to stay alive.