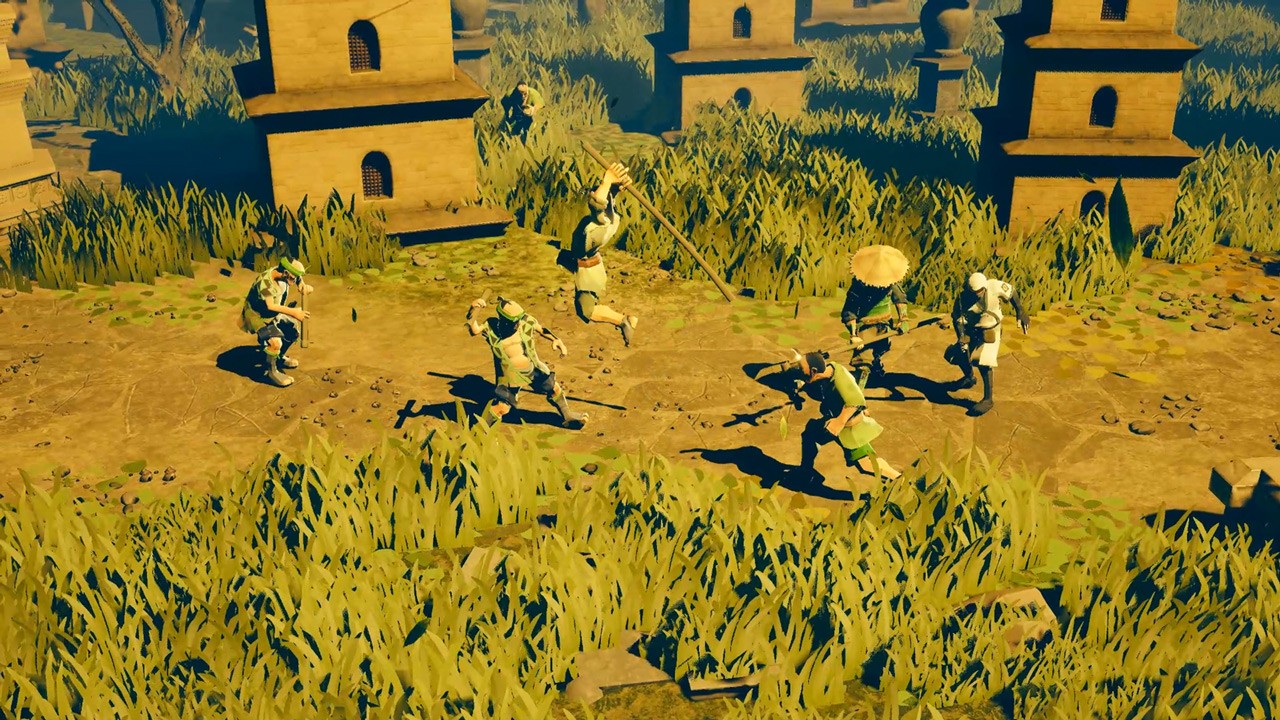 I’ll be honest when I say that I’m a bit saturated with beat ‘em up games. I know that it’s difficult to create something remarkable within this genre when it comes precisely to a type of game that there’s not much to innovate. I’ve had contact with the most diverse and recent titles and reimagined famous franchises in the world of beat ’em up, such as Battletoads and Streets of Rage. Some indies also sometimes try to launch something like this, but always fall in the same cliché of beating enemies, walk, do this for a few more stages and finish. Certain games have managed to do something apart from that and had my attention for longer, like the amazing River City Girls, based on the universe of the Japanese game franchise’s Kunio-Kun. That said, I received 9 Monkeys of Shaolin with open arms, even though I heard a little bad things talk about the game out there, saying it was more of the same and stuff like that. To my surprise, I ended up having a lot more fun than I thought it would happen.

9 Monkeys of Shaolin is a game developed by a studio called Sokoba, who previously made a game not very well known or acclaimed by the name of Redeemer. The plot of 9 Monkeys of Shaolin tells the events of a medieval China, and of the life of Wei Cheing, a Chinese fisherman, who has his village invaded and completely destroyed. But when he tries to defend himself against the invaders, Cheing ends up being hit and passed out. Then the fisherman is rescued by a group of monks who take care of his injuries and take him to a temple. With this, the protagonist wishes to avenge the death of friends and family, counting on the help of his new partners to reach his goal.

The game does not innovate as much in terms of beat ‘em up gameplay, but it has fun with its variety of strokes that are divided into three levels: an attack with the feet and two others with the upper body – usually using a staff or similar. In addition to these divisions, each stroke of attacks allows a stronger version to be used, consuming an energy bar below the health bar. Fortunately, these are not attacks that consume the character’s life, something that I simply hate in games of the genre, such as Streets of Rage and the Final Fight franchise. This practice simply annoys me because there’s usually a second combination of jump and attack that uses this special move, which ends up happening accidentally numerous times and usually cannot be disabled. Fortunately, 9 Monkeys of Shaolin evaded this terrible mistake, causing the enhanced versions of their moves to be used by holding their respective buttons. 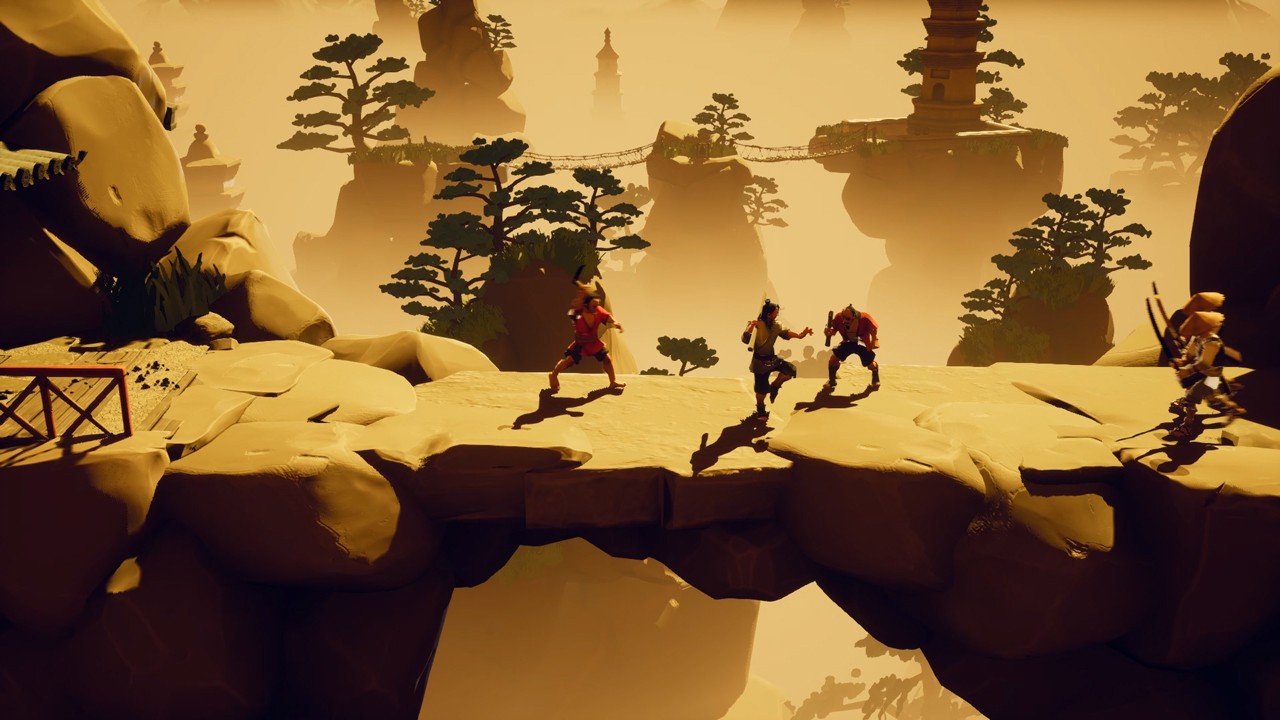 In addition to these possibilities, after a few stages, attacks that make use of Qi, an inner power within the game universe, are also unlocked. These Qi blows also consume an energy bar, and act as a power that takes much more life from enemies, in addition to being necessary in fights against some bosses who are not hit with standard attacks. Other than that, dodging is also quite necessary using the B button (on the Switch), which also serves to stun enemies for a few seconds as the character practically hits while dodging. Additionally, there is a command to repel attacks through the L, which is required against opponents who use darts, bombs and other projectiles to attack the character, causing the shots to turn against them. Some very simple platform challenges also exist, like holes in the ground and other obstacles that can be overcome with the use of the dodge button, but nothing that it’s a real trouble. As it could not be missed, destroying objects in the scenario grants healing items and others that serve as a temporary boost for attacks. The variety of enemies is also relatively large, and features very different characters like pirates and Japanese samurais, as well as scenarios with the theme of each group of the baddies we’re facing.

Each mission has a reward level that can be obtained, but also new equipment such as weapons, shoes and necklaces, each item having its own attributes such as a quick increase in the energy bar, more attack speed after a specific number of combos, etc. In the temple it’s also possible to choose which mission will be next by talking to an NPC and deciding on a map. This place acts as a Hub, where we can increase the attributes of Cheing with points obtained by completing the missions in the missions. In the temple there are also skins to be unlocked for the protagonist and a multiplayer mode that can be started when talking to a secondary character. Something I didn’t expect is here: online multiplayer. Honestly, I no longer count on this type of online communication in games of this genre, but, when it exists, it’s a big surprise for me. 9 Monkeys of Shaolin allows a cooperative mode for up to two players, either on the same console or over the internet. The gameplay works very well, and the game tries to balance things by giving practically the same amount of points to be distributed to the second player, making him as powerful as the main player during missions. 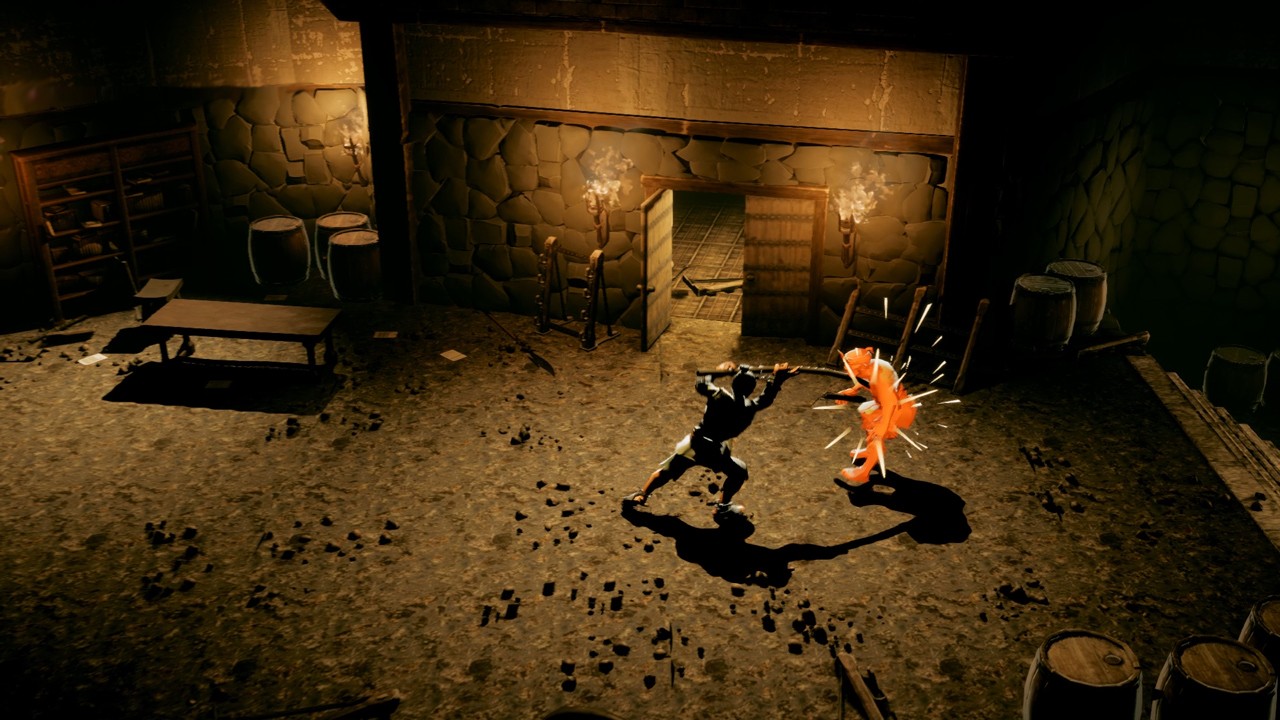 However, what makes everything more fun is precisely the cooperation, which allows one character to lift up the other defeated in battle, something that does not happen by playing alone. During missions, the camera focuses on both characters, not allowing one to get too far from the other. Unfortunately, progress is restricted only to the host of the match, so the invited player must forget about bringing up his equipment and upgrades gathered in the solo campaign. Although this mode is available to play with friends, there is also a search system, making it very easy to know if someone is playing or not, without having to count on luck to find a match or wait for someone to miraculously join your game.

Despite 9 Monkeys of Shaolin not creating anything as innovative or ever seen, the game has good game design practices and goes well with everything that’s proposed. Its gameplay is fast paced, special moves do not consume health, the system of upgrades is very stimulating and the number of moves available is vast enough to diversify the gameplay. Playing alone is not as fun as playing the cooperative, but the minimally captivating story and the character with a good background story are able to sustain everything at a level necessary so that, in addition to good gameplay, 9 Monkeys of Shaolin will conquer the player with its charisma.

Despite 9 Monkeys of Shaolin not creating anything as innovative or ever seen, the game has good game design practices and goes well with everything that’s proposed.