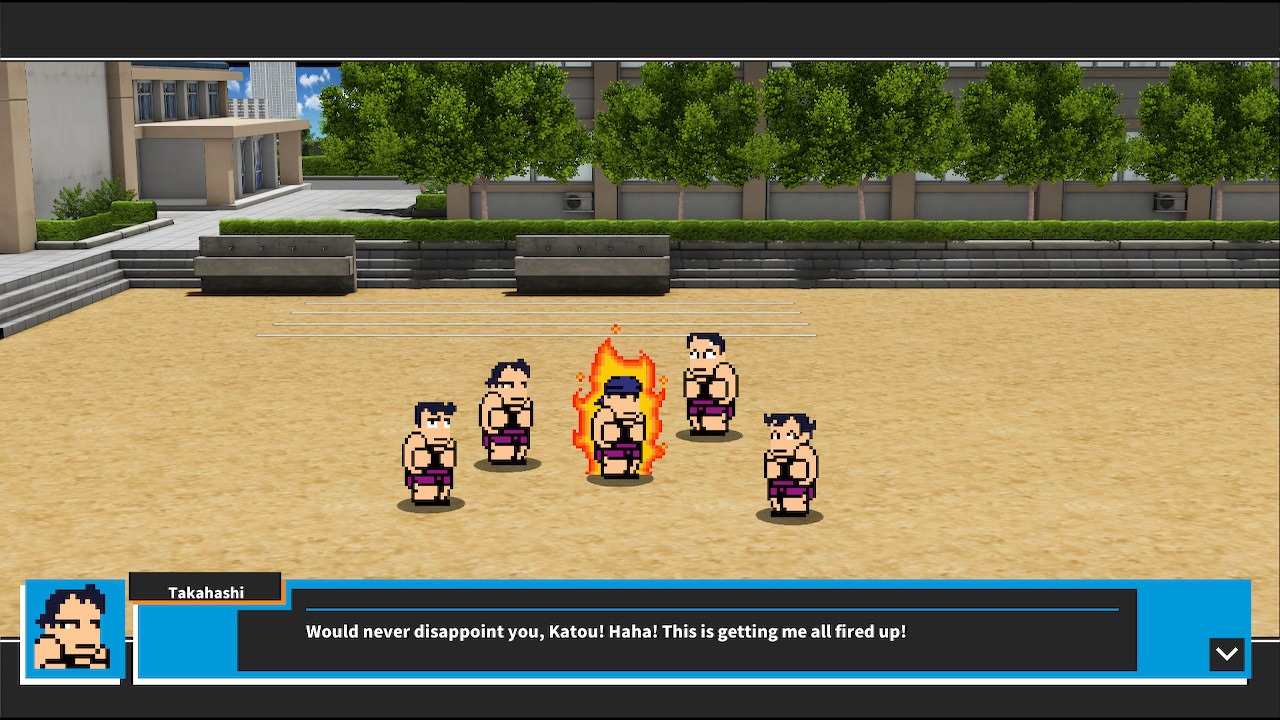 As a gamer that started my own gaming path at 8-Bit era, I must confess that my lack of knowledge about the Kunio’s franchise is a shame. I’ve never been invested in this series, so I know nothing about its universe. That said, is it possible to have fun with something that I’m not acquainted to? Short answer: of course.

First of all, this is not a serious fighting game, neither has a deep lore or anything explorable, it should be faced as a party fighting title. And, man, I just love this kind of gameplay. For Super Smash Bros fans, good news: this is where Kunio’s universe meets Smash. And even though I’m not a big Smash Bros sort of person, River City Melee Mach!! Totally hooked me, since I’m very vulnerable when it comes to smooth and intuitive gameplay. Yes, I care a lot for the story, character’s background and everything else in a game, but when it focuses on giving me truly polished gameplay, it gets my attention once for all. 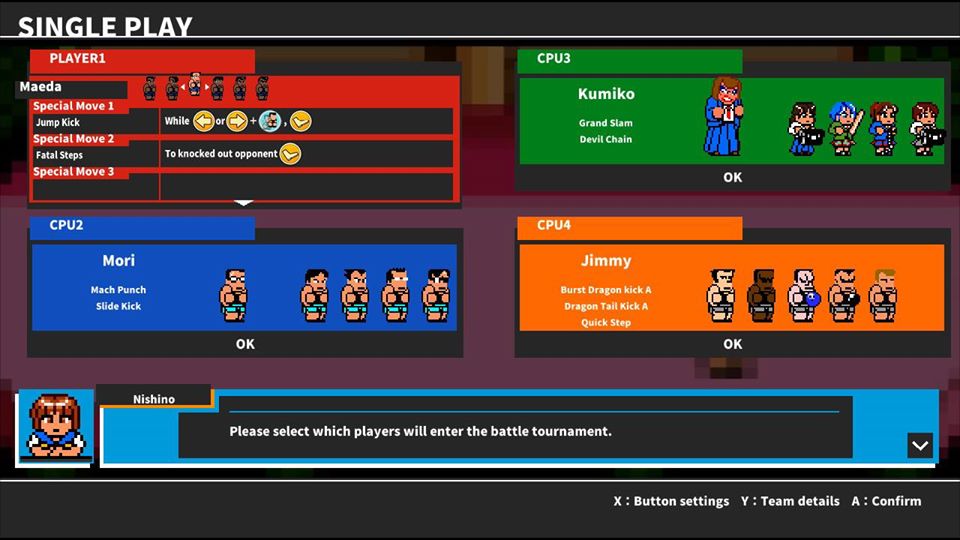 Well, if you’re somehow familiar with Beat ’em-up games, you’ll be glad to know that River City Melee Mach!! Is an awesome arena-based one with Beat ’em-up controls and a lot of characters inspired by other Kunio’s spin-offs. You can pick up a team containing six guys from different high schools or organizations, and experience a story in their own perspective, dialogues and jokes. Each character has some really nice variety of combos by just using 3 simple commands: jump, punch and kick – which are fully remappable, don’t worry.

Even though it seems a very limited range of commands, this is expanded because every character in the game has their own skill set – however, some of them are very subjective about their meaning -, as well different statistics. The 3D stages offer a good amount of all sorts of throwable stuff, drinks that replenish your life or provides you some special effects, and melee weapons like a baseball bat or a sword.

Also, some scenarios can be used to your advantage or not, so you can catch yourself dropping out from where the ground ends just like other titles of this genre. Keeping that in mind, you need to do your best strategy to survive rounds and keep your team alive, since the game’s core is something like a survival mode, where your teammate’s health is brought from a fight to another – so it’s better to change them every round. 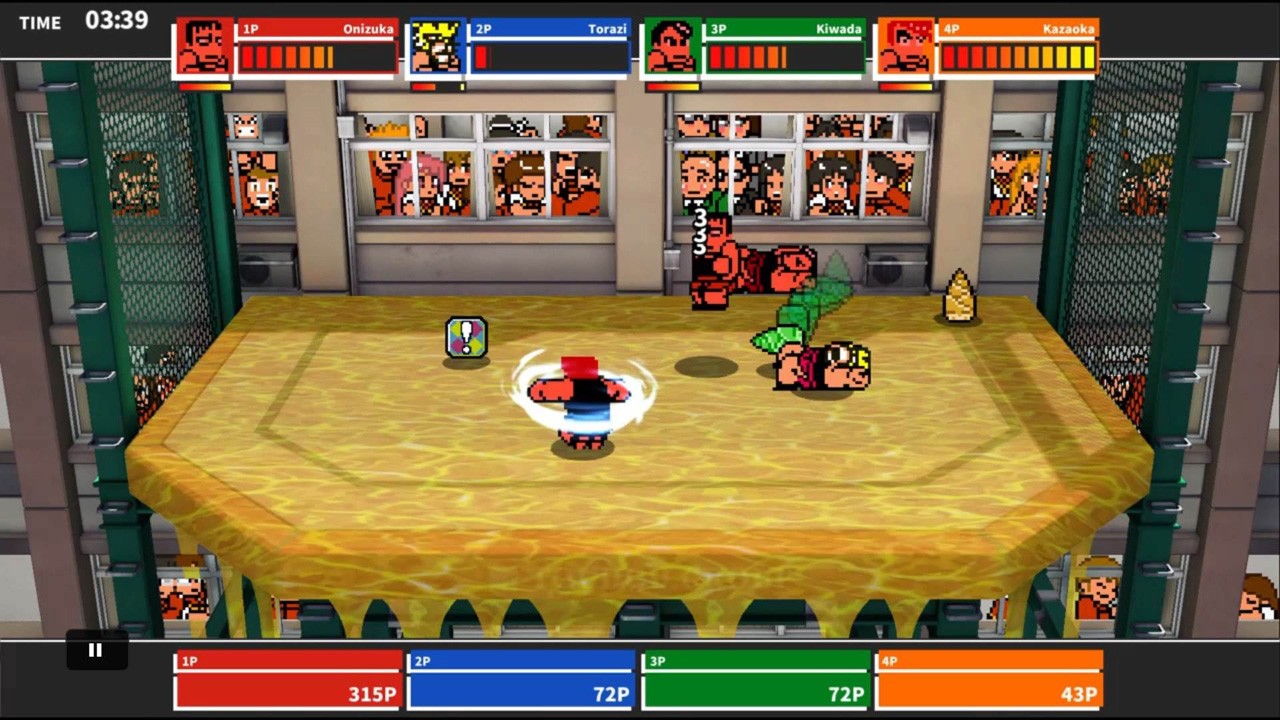 Apart from the story mode where the tournament happens, River City Melee Mach!! Has an online mode, which, unfortunately, doesn’t support crossplay. So you will be restricted to the Switch installed base – which is basically dead. However, there are two extra modes to face your local friends and family in the free battle menu. Battle Royal is the free-for-all mode, Tag Match is where you can tag up with someone and enjoy team matches, in Change Match the opponents keep coming in real-time after someone’s health reaches zero, whereas Endless Battle is basically the survival mode. As an extra feature, you can build up a unique team using available characters, but unfortunately you cannot make your own customized 8-Bit Kunio brawler.

Finally, River City Melee Mach!! Is a nostalgic feeling even for those who have played no game of the Kunio series. The party-ish fighting gameplay shines, the available modes do a great job in terms of replayability and fun with friends. But remember: the online mode is totally dead, so you will need to find someone that owns this game on Switch if you want to fight people through internet.

Despite the dead online mode due to the poor installed Switch base, River City Melee Mach!! has a great approach that mixes beat ’em up and party fighting games elements.