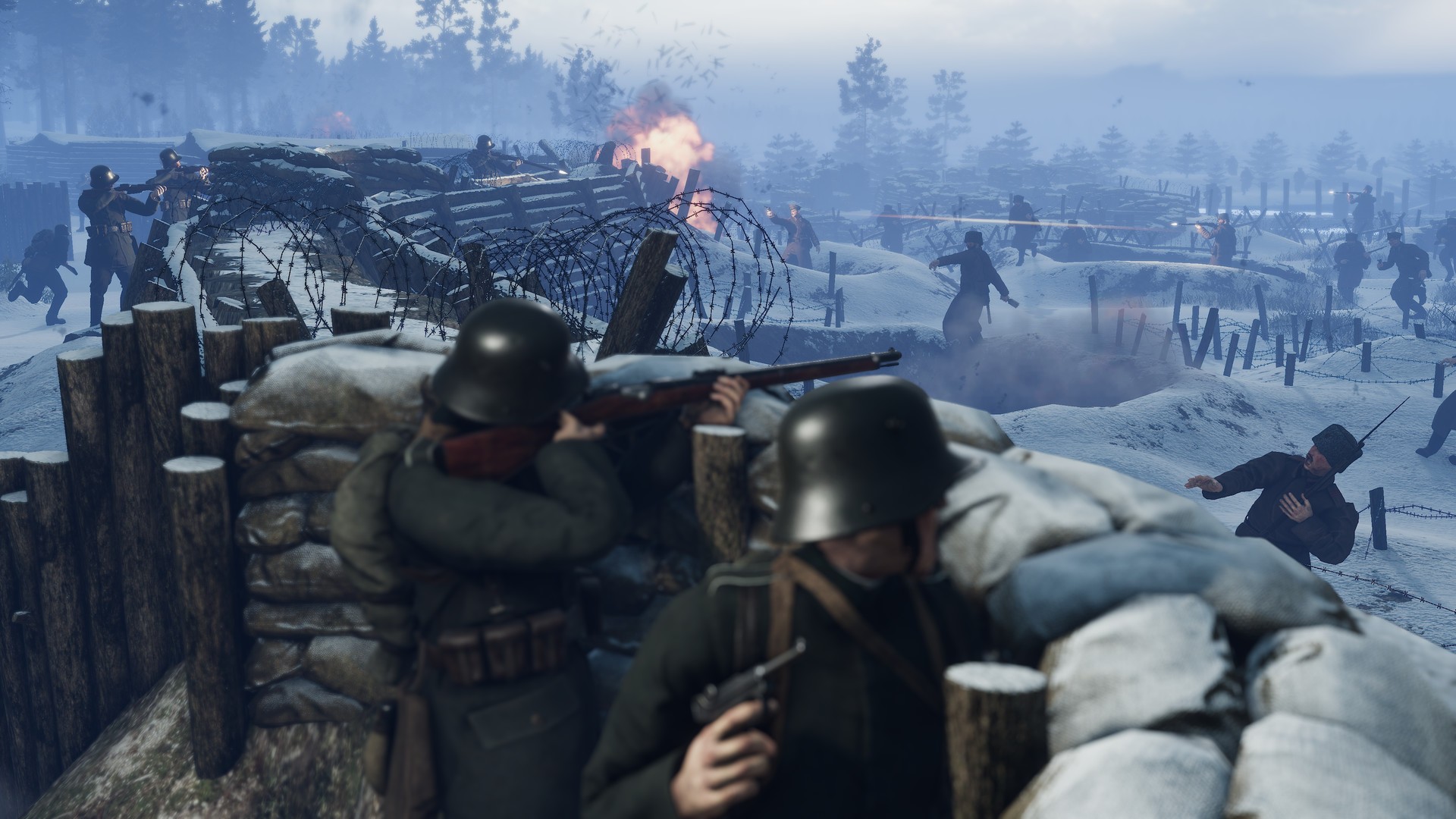 If I mentioned World War first-person shooter, I’m almost certain I’d see a large percentage of your ears stand to attention. We’ve seen a bit of a return to World War I and II shooters in the last five years or so with Battlefield 1 and V and even Call Of Duty WWII. Even though all of these games were welcomed with open arms the last one we saw from this pile was Battlefield V and it had a rough reception and wasn’t very well received. This was mainly down to the lack of content and the release window, but I also think it was the short gap from WWI to WWII. Battlefield 1 was still performing extremely well, and the new one came far too soon.

Tannenberg has recently launched to Xbox One and Playstation 4 after 18 months in the PC world. The game was actually in early access on PC since November 17th, 2017 and was granted its full release on February 13th 2019. Tannenberg is a standalone expansion to Verdun, which was of the same premise in which it was a WWI shooter. Tannenberg is inspired by the 1914 Battle Of Tannenberg in East Prussia and is developed and published by Blackmill Games and M2H.

Tannenberg is an affordable entry into the shooter genre currently at £16.74 on Xbox One and boasts online combat with up to 40 players online. Even though this is a slight decrease in the 64 players that PC caters for it is still plentiful and rich in its experience. It’s important to state early on that this is an online multiplayer experience, but if you’re not keen on this, you will be able to play the game with bots instead of real life players. Something I had to comply with in the run up to the official launch as the servers were empty.

There are three game modes available currently known as; maneuver, attrition and rifle Deathmatch. Alongside these modes is the ability to create your own public or private matches using custom. This allows you to select one of the three modes, one of a total of nine maps, the weather, volume of players and whether you want it to be real players or bots or a mixture of both. 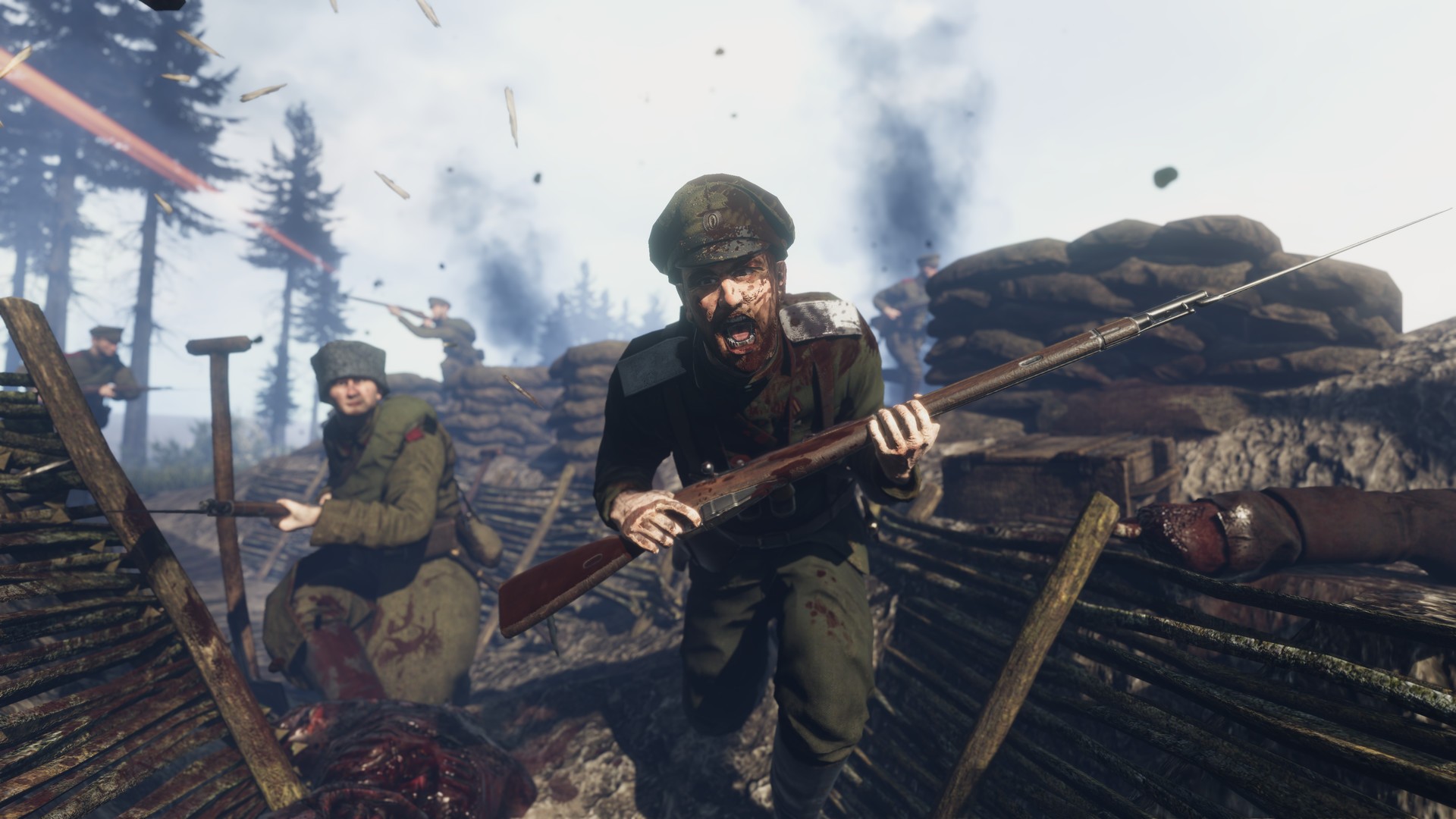 Maneuver is all about capturing territories from the enemy and basically a huge tug of war of capturing turf. The main aim is to push the enemy far back enough to take the entire map whilst exhausting the enemy tickets. This mode is by far the most popular within the servers. Attrition is the fancy name for team Deathmatch where both teams are expected to kill the other. Rifle Deathmatch is a free-for-all mode where everyone is out for themselves. What really pleased me is the ability to change region across the world if player numbers are low. So if you’re like me and play into the early hours, you can switch to American or Asian servers to cater to your needs.

You’ll notice right off the bat that graphically this game isn’t the best, but don’t let that deter you from playing. Stick with it! Tannenberg boasts 40 weapons with the majority being bolt action carbines with some punchy revolvers. Grenades are in abundance with about ten different variants. You’ll also have some other kit such as a gas mask, which you’ll be able to use when trying to wade through toxic gas grenade fumes. Weapon handling on Tannenberg is super realistic, you must account for bullet drop and be super patient. You will also have to be mindful of target leading and aim a little ahead of the target to account for the enemy movement speed. But practice makes perfect, right? This is no run and gun game, you’re experiencing proper trench warfare and one hit and you’re dead, so you must be wary of your stance, pacing and movement. Guns will sway slightly because of the weight of the gun and this can be stabilised by crouching or going prone. Holding your breath for a second before firing also makes for a more accurate shot. 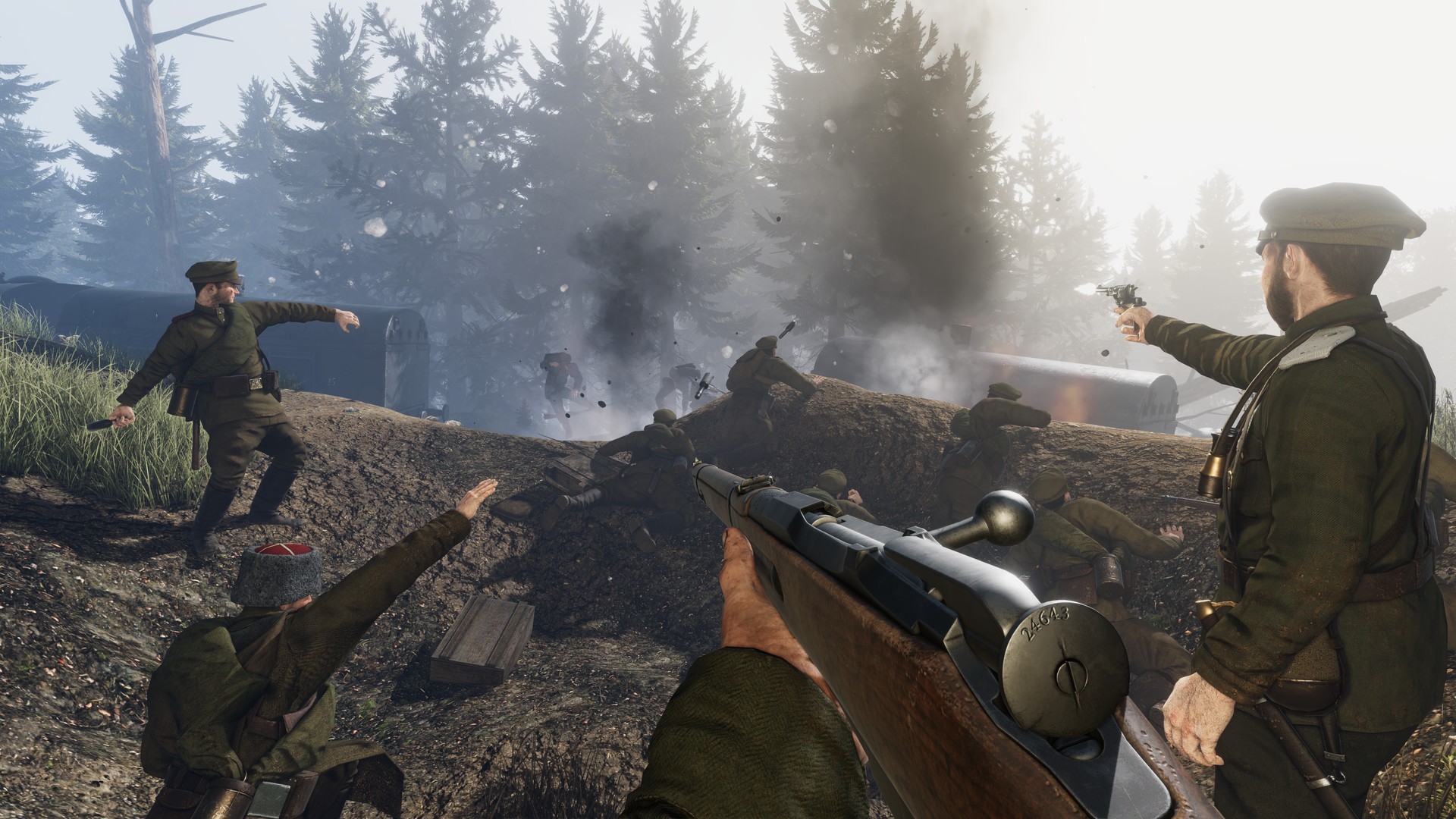 As shooters go, I don’t think I’ve ever played something so realistic mechanics wise. Loading mechanics differ from weapon to weapon when on the reload. Obviously the bolt action rifles will be a bullet by bullet reload. Some weapons will be able to reload several bullets with a stripper clip, but only if you have shed enough ammunition to accommodate it. The Kar98 for instance, allows both options. A few weapons will allow magazines to be used and bayonets to be attached.

The realism really compliments the overall feel of the game, and this is what really holds Tannenberg up. My first reaction of the game was the graphics weren’t great at all. A little fiddle with the options and you can increase the frame rate, but with the added risk of some screen tearing. I found this useful as it made the visuals slightly more pleasing on the eye. The draw distances across the map is strong enough to spot out enemies from afar and pick your shots.

What is fantastic about Tannenberg is how truly satisfying it is when you actually get a kill, especially from range. You can choose to push forward with your team and squad or camp in the trenches and survey the landscape and try to pick people off. I like to run and gun in games, but with this one I loved just sitting trying to scope the opposing team out and slowly pushing forward to try to capture the next area. The map layout is consistently good, with some great areas to uncover and safety spots to sit and camp. If you choose to constantly run from point to point, it can be very unforgiving as an enemy with an accurate shot will have you dropping to the floor like a lead balloon. What made me belly laugh was when I was next to a friendly soldier and he took a bullet to the chest and collapsed and sounded like a scene from Saving Private Ryan with his screaming in pain. They have got all the elements blended into the battlefield brilliantly.

If you can glance past the dated visuals of Tannenberg and actually take in everything else, then this game is sublime. I absolutely enjoy every second of this shooter just for its historical accuracy, realism and tense frantic firefights. Again, this shows that graphics don’t make a game if it can tick every other box. The sound effects, the music, gunplay and mechanics make it a joy to play alone or with friends. You’ll be able to squad up with three others, follow a ranking system and deep statistic tracking along your way. For its price point, Tannenberg is a steal and I’m recommending this to all of my friends so I can jump onto this time and time again. A must buy for anyone who is a shooter fan!

Tannenberg is the most historically accurate WWI shooter I have witnessed, featuring 40 player online battles, over 40 weapons along with a squad system and deep stat tracking, it is up there with the best shooters!