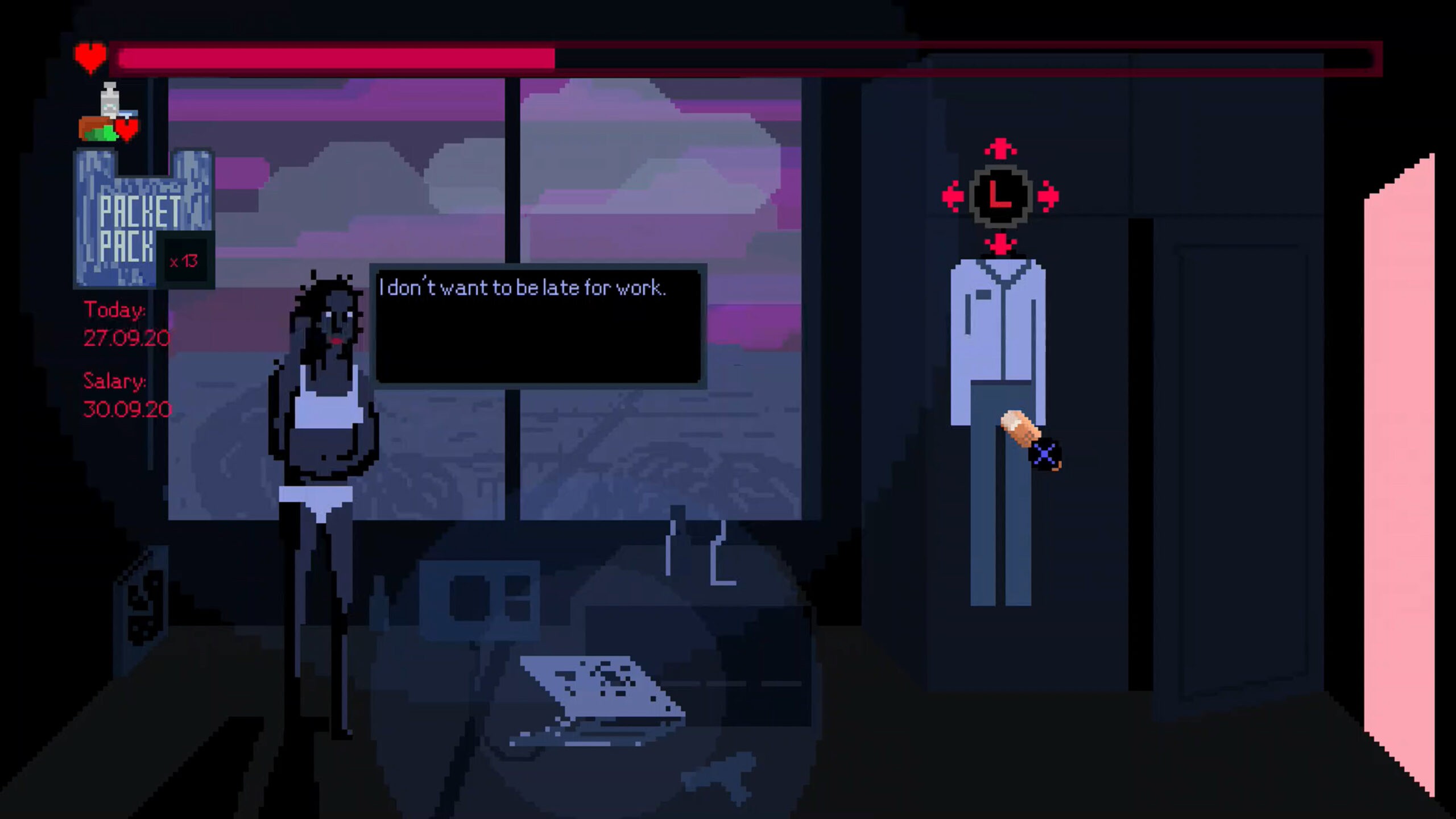 Need a Packet? is a simulation game that delivers all the glamour and excitement of losing your mind because of the monotony of working as a cashier. No, seriously. Need a Packet? has you scanning purchases, collecting payment, and offering “packets” which is really just a weird way of saying “flimsy plastic grocery bags,” while the world around you becomes more and more confusing and chaotic. Though it’s tagged as a horror game, the most horrific part of Need a Packet? is the fact that very little of it, manning a cash register aside, makes any sense.

Sometimes games are weird and that’s their entire shtick. Now, there’s a difference between good weird and bad weird—by which I mean weirdness that has a reason versus weirdness for simple shock value. Need a Packet? definitely falls into the latter category. Sure, the premise is that the character you’re playing is slowly going out of her mind, but given that you know nothing about your character or what she was like before she started seeing these hallucinations makes it difficult to sympathize or even understand what the big deal is. Plenty of people work monotonous jobs without losing their ever loving minds, so the insanity angle isn’t one I’m buying. 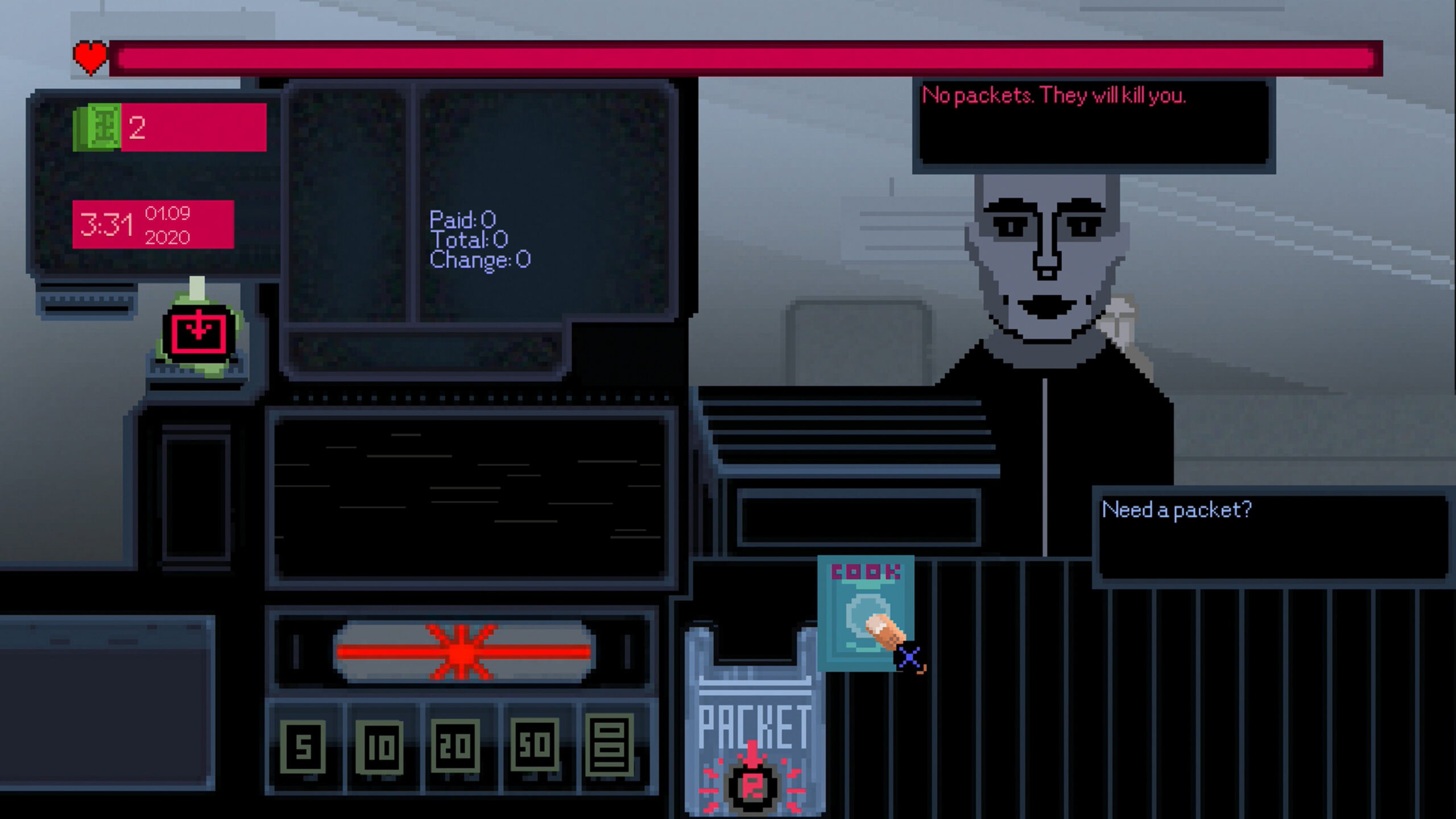 During your shift, which lasts an approximate three minutes, you’ll scan groceries, key in codes for bread and produce, deny minors trying to buy alcohol, collect payment, and provide correct change using a combination of x and the left stick. You can really feel the monotony of the simple, repetitive tasks— which is the point. As you continue to work over the course of days and then weeks, the grocery store does in fact start to look like a medieval castle as promised in the storefront blurb. Sometimes you’ll notice that characters from one of the apps on your phone will linger in the background during your day and just stare, which is strange— but again doesn’t quite hit the horror mark. Trash also piles up from your packet sales, which is supposed to be a comment on pollution, but the intended message is lost amidst bizarre occurrences.

It’s difficult not to compare Need a Packet? to Papers, Please (not only because it looks like a blotchier version of it) as the two as they have fairly similar gameplay in that you’re taking a fairly mundane and methodical task and making that the heart of your video game. It’s a risky decision, considering video games are meant to be fun and entertaining, but if the positive reception of Papers, Please is anything to go by, it can be done. The main difference between the two is that Papers, Please is purely a simulation game in which you scan documents and are tasked with more complicated tasks as you get more acclimated to the basics. In Need a Packet?, you also have to deal with nonsensical tasks like the arbitrary bullet hell mini game on your way to work. Why do you even take control of the bus in the first place? I could understand if it was your own personal vehicle being used during a psychotic break, but to assume control of public transportation and avoid being struck by passing boats and random falling spikes makes no sense. Beforehand, you’ll stare at your phone during a boring lull in which you watch the news or some cooking/streaming show, both delivered in poorly written English. I guess this was a joke on the setting clearly being in a foreign country. 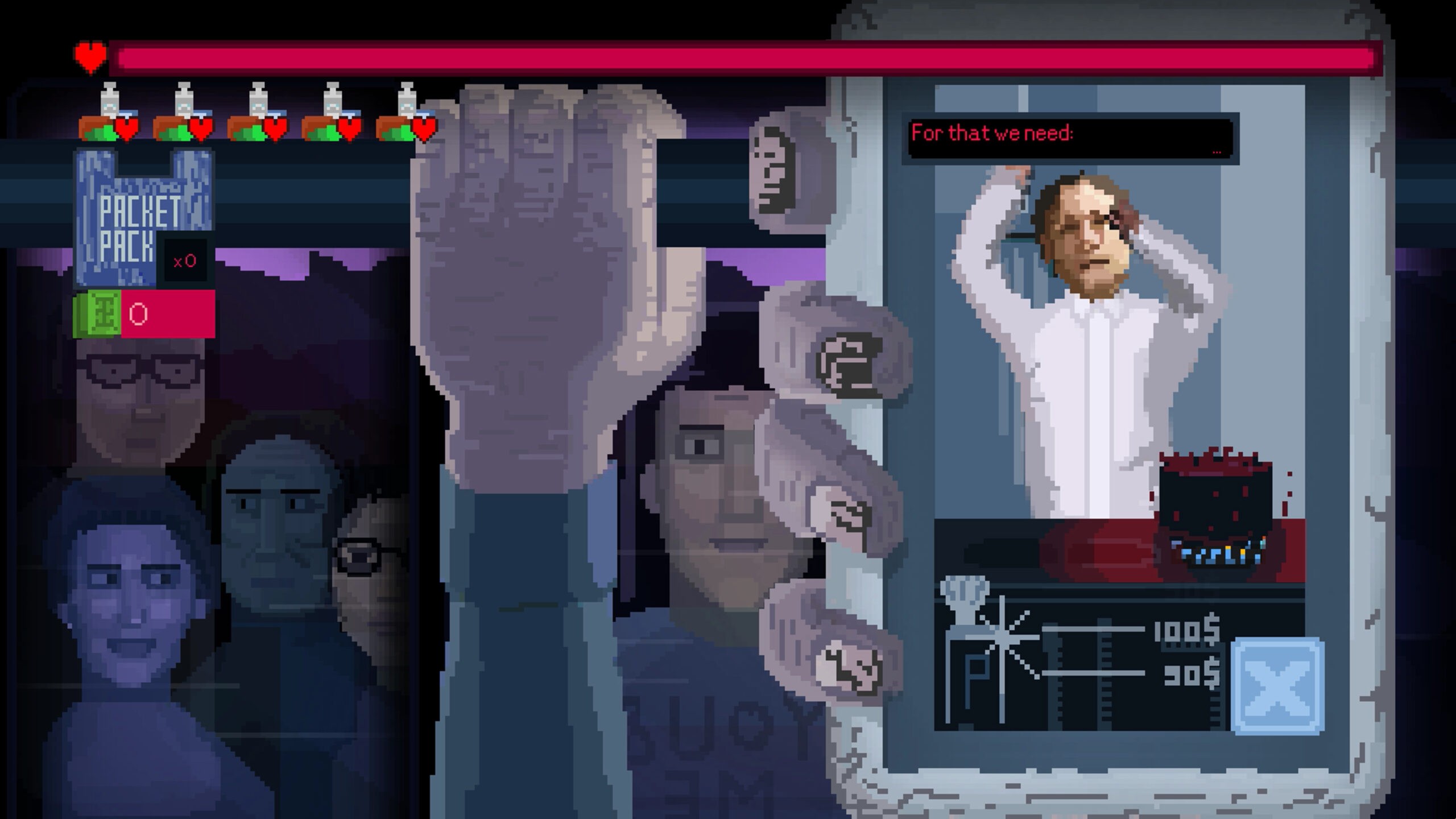 Papers, Please also have a system in place for every task and it’s explained to you via a detailed handbook available for your perusal at any time. There are no terribly complex tasks in Need a Packet?, but when the manager randomly puts up an “Alcohol 21+” sign, there’s no actual way to verify anyone’s age and so it becomes a game of trial and error. The money you receive for working directly correlates with how many people you ring up and can be used to furnish your rathole apartment, purchase elven defenders, restore your health, which is lost during that bullet hell mini game I mentioned and… recycle. The packets you sell are represented by the trash piling up in your own kitchen, for some reason, and you can pay to have it removed. Again, this would be a really great message about environmental protection, but out of the options I just listed it just seems like another random game design decision. If you make three mistakes during your shift in Need a Packet?, your pay is docked. Mistakes entail things like that turning away a customer who isn’t underage, not offering a packet to those who ask for one, and failure to collect sufficient payment. Oddly enough, giving out too much change is not registered as a mistake, something I did when accidentally selecting the wrong bill in the register.

There are a few possible endings to unlock, depending on whether you refuse to sell packets/pay to recycle, sell as many as you want without caring about what happens to the environment, or meet your maker at the hands of random bus assailants. Otherwise, there’s really no reason to play through Need a Packet? more than once. A playthrough can be finished in as little as half an hour, especially if you play on easy difficulty. The only real difference between easy and normal is that the world is a little less grimy in appearance and there’s no bullet hell mini game to contend with during your otherwise boring bus ride. The music, during the few instances where you get to hear it, is actually quite good and I wish it was more prevalent during your playthrough.

Need a Packet? has a good message, but it’s lost in the slog of mundane tasks and whatever the hell is going on in the background of the grocery store. I didn’t enjoy my time with Need a Packet? and I’m not even sure what kind of audience it targets, so I can’t say I recommend it to any one type of player. If you’re the type who doesn’t look for rhyme or reason and doesn’t mind repetitive tasks, I suppose you could have a couple of hours of fun (?) with this title. And maybe those who just like really strange and obscure titles. Otherwise, steer clear.

Sometimes games are weird and that’s their entire shtick. Need a packet? is a repetitive slog of mundane tasks punctuated by the occasional bizarre nuance.