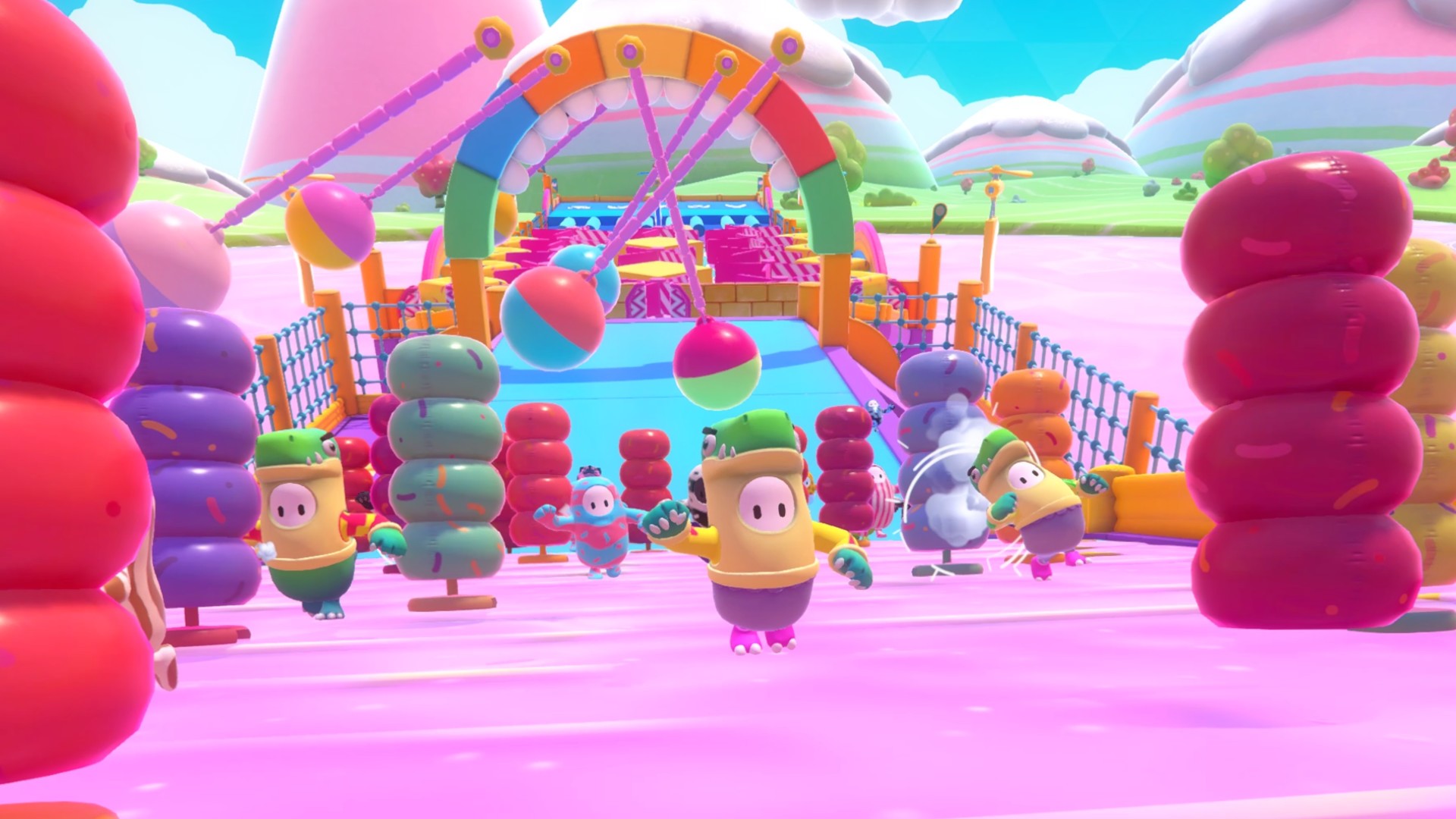 Battle Royale games can often feel a little oppressive. Between the ultra-competitive players these games tend to attract and the newbie unfriendly nature of much of the genre, they can be off-putting to gamers who don’t have the time to ‘git gud’. In steps Fall Guys: Ultimate Knockout, the latest game in the genre which does something that no other Battle Royale game has, it makes losing fun.

Playing out like a video game version of television game shows Total Wipeout or Takeshi’s Castle, Fall Guys puts you in the role of a little jelly bean shaped person and tasks you with running, jumping and stumbling through a variety of obstacle courses and mini-games in order to be declared the winner. The core mechanics are extremely simple to grasp, there’s literally only three buttons to learn, meaning that even new players will have a fighting chance from the get go.

The usual thrill of victory found in the genre is present here and beating out 59 other players to win a literal crown is as satisfying as any chicken dinner or victory Royale. However, the mayhem that ensues when 60 floppy-fall guys collide as you compete to cross the finish line first is so hilarious to witness that even when you get left behind and cannot win you’ll probably still laugh at the chaos that has unfolded. 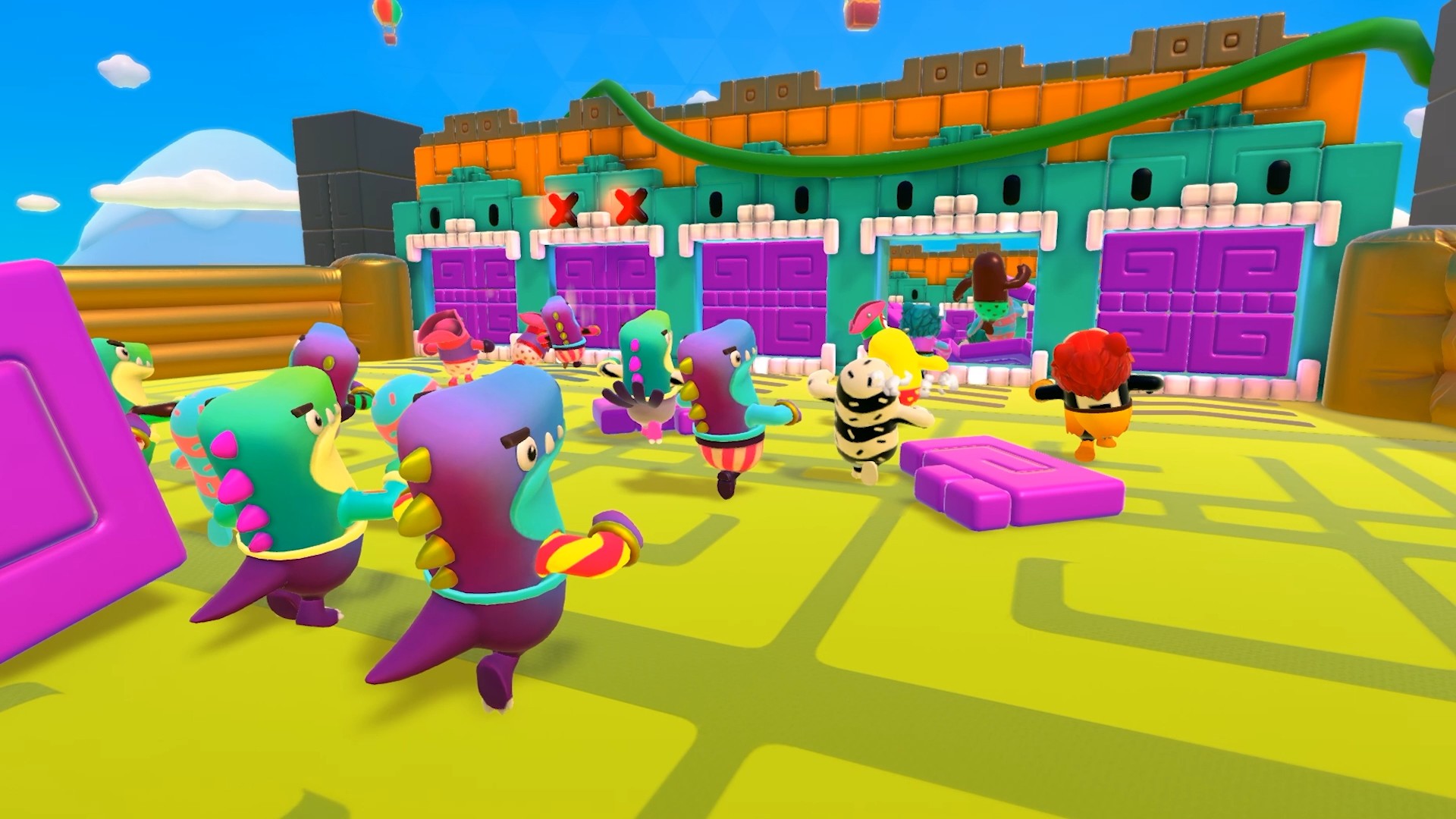 The basic structure of the game is simple enough. A match is played out in various rounds (usually 4-6 rounds a match), with a group of players being eliminated in each round till the final event where the remaining players compete in one of three games to be declared the winner. There’s definitely a stronger element of luck to who comes out on top than in other Battle Royale games, but skill is still important and those more familiar with the game will usually reach the final round.

At the minute there are 24 different games in rotation, and they range in scope and scale. The devilishly tricky Slime Climb tasks you with scaling an obstacle course while colourful, but deadly, pink slime slowly rises up around you. Another, called Door Dash, asks you to run through a gauntlet of doors, but the catch is some are trick doors that won’t open, which creates mass pileups of players as everyone tries to squeeze through a single door in order to avoid elimination.

There are also team games which randomly split the player base up and momentarily requires you to work together in order to qualify for the next round. It can be a tad frustrating when a good run is ruined because of lacklustre team mates, but the team games also lead to some of the best fist-pumping moments when you pull off a clutch win or eliminate another team through tricky tactics.

The two dozen games currently on offer are mostly all great, though the fruit matching game is a drag and grinds proceedings to a halt with a tediously long memory game that rarely eliminates players as it’s so simple. The developers have promised new games will be periodically added as well as existing games being updated to keep them unpredictable, which will be critical to Fall Guys long-term success as playing the same games repeatedly will in time become stale. 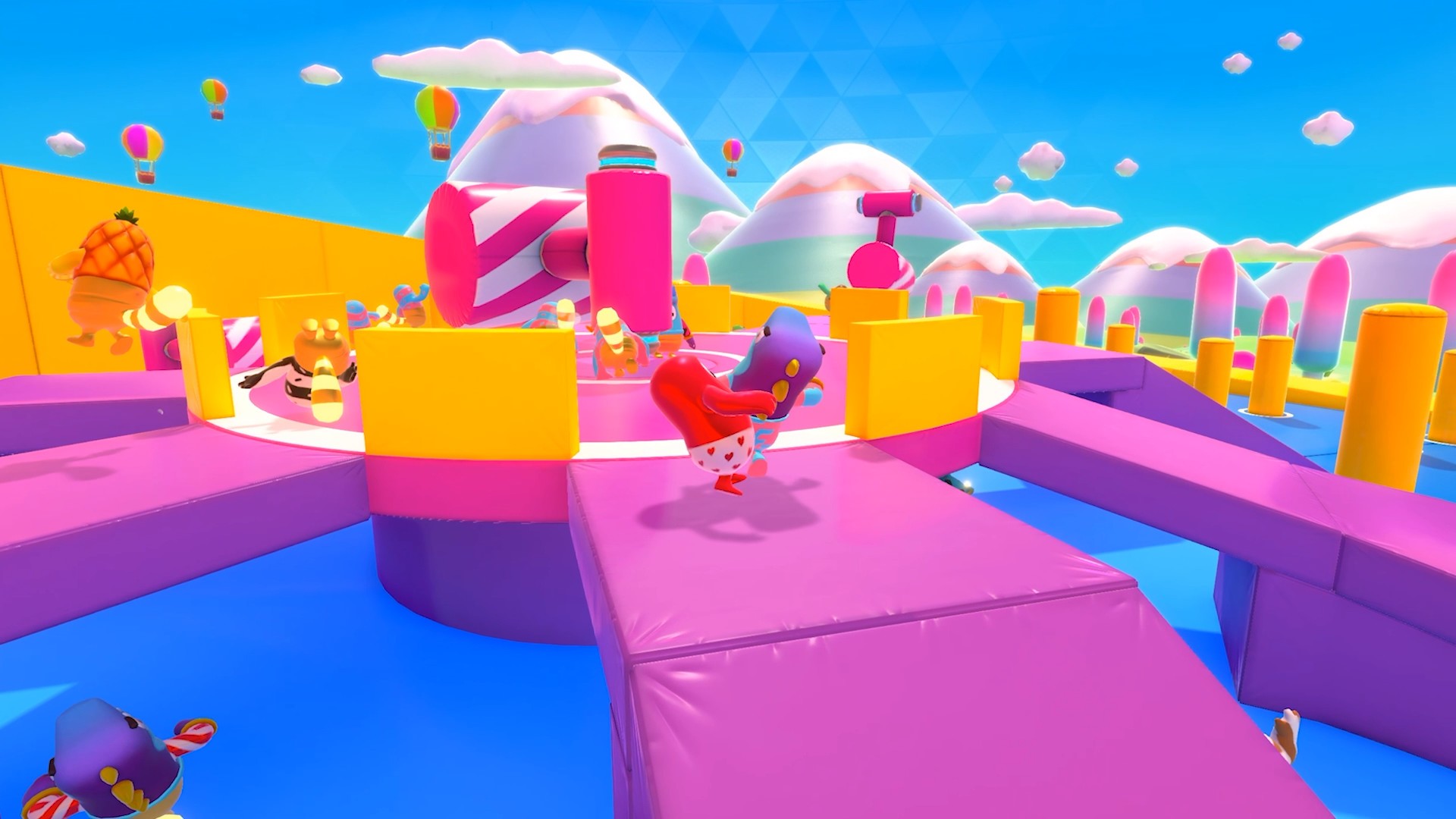 While most of the current games on offer are enjoyable, three revolve around a tail grabbing mechanic which is fundamentally broken. These games task you with keeping or stealing a fox tail from other players in order to win, however the grab mechanic suffers from serious hit detect issues which often means you’ll be right on top of another player and your fall guy will fail to nick their tail. Even more frustrating is one of the three finale games revolves around this mechanic, and it’s extremely disheartening to make it all the way to the final round only to lose out because of a broken mechanic. Hopefully these games are either removed or drastically reworked in the near future, because currently they’re such a pain to play that it’s tempting to just quit when they come up in rotation.

Visually Fall Guys is charming, but simplistic, with big-blocky obstacles and colourful hazards to jump over. The titular fall guys may be simple in design, but they’re packed with personality and there’s a wide variety of costumes that you can buy with in game credits in order to play dress up. The charming aesthetic makes the game a pleasure to play, it’s infectiously joyful meaning that even when you lose you’re unlikely to rage like you might in more gritty competitive games.

Fall Guys have carved a lovely little niche for itself in a genre that has already become seriously overcrowded. Its combination of accessible gameplay and sugar-sweet visuals along with the competitive drive that has become a hallmark of the Battle Royale genre makes for a game that feels wholly original and will have you smiling constantly even when your fall guy is plunging towards his demise in a vat of pink slime.

Fall Guys: Ultimate Knockout is a refreshing twist on the popular Battle Royale game, and it’s an absolute riot even when you stumble at the final hurdle.