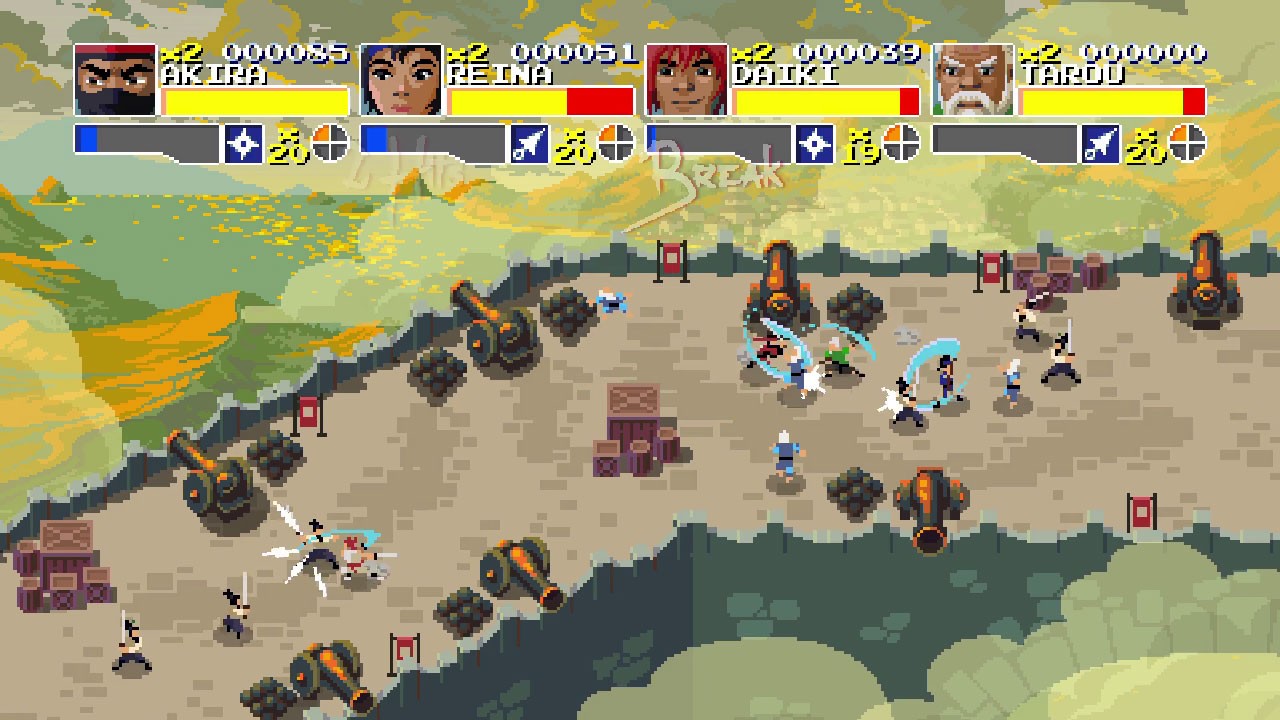 Clan N is an old school RPG-like adventure that’s more on the arcade side of the fence than in-depth stats and inventories. It can be played as a solo effort or with pals locally or in multiplayer. It’s a bit of a mixture of Japanese and Chinese culture set in medieval times with a few fantasy elements and with no real driving force in terms of the narrative; you work your way through enemies to fight the evil Akuji – a former samurai who discovers mystical powers and enslaves the people.

For a top-down/isometric viewpoint type game, I was quite surprised by the number of controls. Aside from those above, there’s also a block, jump and roll included. It’s quite rare to see a jump in this sort of game, but it comes into play quite early on, but there are only a few times you need it to proceed. Despite the number of controls in hand, everything flows relatively smoothly and feels more arcade than a typical RPG, with countless menu screens and configurations.

My first playthrough was a solo game, and after a quick tutorial section, the action quickly followed. There’s not much in terms of tactics in the game, and I eventually found myself button mashing and most NPCs will block anyway, but after repeat hits, they drop their guard. There are a few different enemy types – either melee or ranged, but some hitting hard, or harder to hit. The larger enemies, a pseudo-mini-boss is pretty easy to deal with, as are the ranged enemies, but you do need to take them out quick as they can knock your character back and result in you being immediately hit by a melee attack. 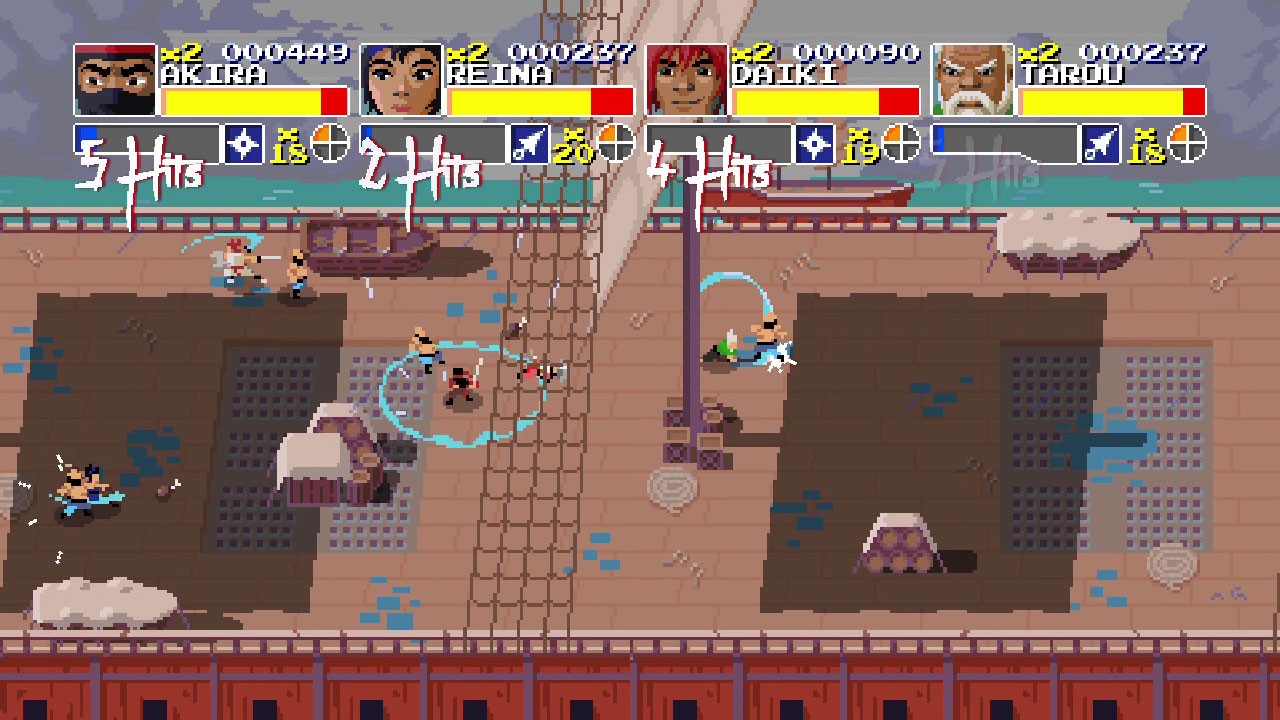 Of all the characters in the game, the ninjas were the hardest/most annoying. There were two types: one would perform a whirlwind move where they could attack you from anywhere on the screen and unblockable, the other kind of ninja would dig underground, reappear and either hit you with a melee or ninja star. By far they were the most challenging, and the bosses weren’t that much harder. They were usually fantasy-based like giant serpents and the like. They hit hard, but their defence isn’t so good, so my strategy was to accumulate enough throwing items and attack from range. The maximum ammo you can have on-screen is 99, but it surpasses this as I was mashing the button and it took a while to change.

Unfortunately, Clan N felt more like a chore than enjoyable. The pixel art is quite nice, mashing up both Japanese and Chinese culture with some decent settings, but the wandering around to encounter half a dozen enemies, move along a little further and another bunch was too much stop and start. There’s a good range of characters, but when they are all on screen in one go, it’s easy to lose your place – especially when you fight on a ship. You have characters running up and down the screen, but are supposedly part of the background; all I could say was that I was a bit disorientated. At one point, I was hugging the screen as it was chugging along to keep up with me, and on occasions, the screen would stop scrolling, but there wouldn’t be any enemies. Moving to all four sides of the screen would do nothing, then suddenly, the screen would flash ‘Go!’ and you could move again.

On that note of sluggish, on the last section, the game crashed for me halfway through. By that point, I was debating whether to play it anymore but thought I’d restart the level and aim to get all the trophies seeing as I had come so far. There certainly weren’t any other incentives as there’s no story or dialogue – voice acted or text, so by then I bit the bullet and aimed to finish it. Thankfully the game remembered where I was so didn’t have to start from the beginning of the stage. Though my health was still low, I could change my character, which I did to see if there was any difference. There wasn’t. By the time I finished and saw the static end title card to say I finished the game, I was done. 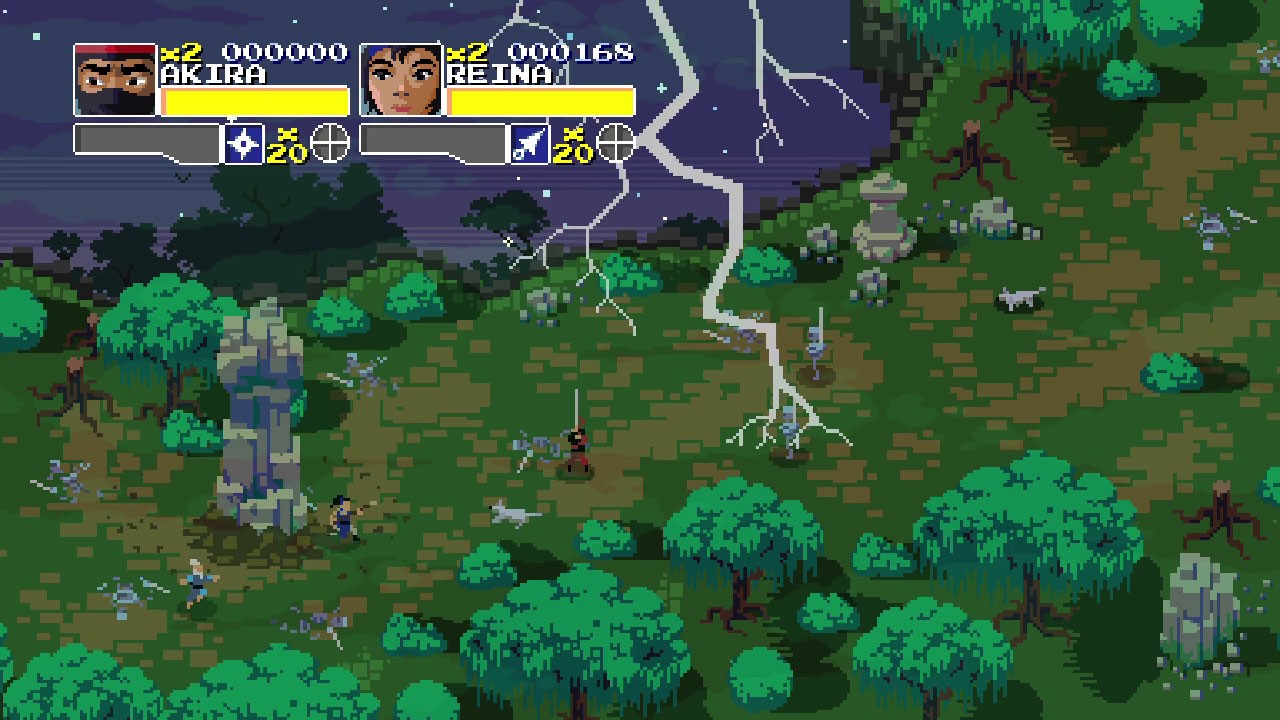 The four characters in the game look like they would have a different playstyle, but aside from their weapons and special moves, they all behaved exactly the same. I started with Tarou and ended with Reina, but there wasn’t any notable change. One thing that stayed through each time I died or swapped characters was the stats. Now and then, an enemy will drop a blue gem that can be used to level up. These stats include strength, speed, endurance, charge and special. The first three are self-explanatory. For the charge, each combo you build up fills a gauge to do a charge attack by pressing the triangle button. If you invest in this stat, it’s easier to fill the gauge, but to be honest, I seldom used it. As for the special stat, I believe that improves the damage your special does, but building this up is quite rare, and I think I only used it two or three times in all of my gameplay. In summary, go for speed and strength as they’re the only ones that make a real difference.

So other than local and online play, there are mini-games on offer. When you start, there aren’t any mini-games to play as you have to unlock them through the campaign. There are 7 in all and ranges from wall running to fighting multiple opponents with one slice kills. For the majority of the time, they’re just filler and relatively easy, regardless of the difficulty you set. I suppose my favourite would have been the Dojo mini-game where you fight all the enemies with a one-hit, one-kill rule. After finishing the campaign, you can come back to these to replay, but they’re not really enough to warrant repeat attempts.

In some respects, Clan N is a bit like Golden Axe in concept, but opting for the pixel art RPG adventure instead. It’s more arcade-like than in-depth, and the controls handle well, but it’s pretty monotonous and even with the mini-games, doesn’t give enough variety to encourage repeat plays.