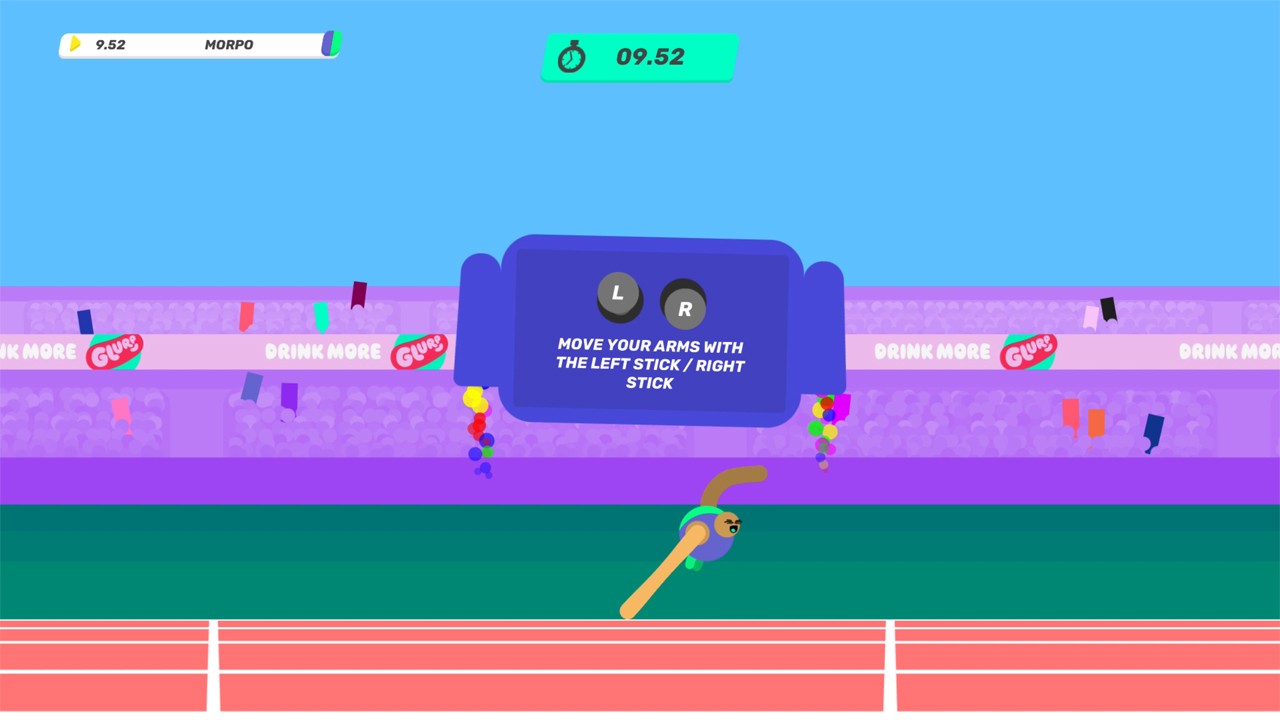 I love the concept of Yogscast. For whatever reason, here we have a group of people, some of them friends, who started playing video games and recording themselves both for video and podcasts because, hey maybe it would go somewhere. Fast-forward 12years, and now they’re a highly established network of channels and groups, hosting massive charity drives each year and, as it turns out, publishing games. Caveblazers was a roguelite blast, and I figured that anything else that the group decided to put their name on would also be fairly solid. The developer, CATASTROPHIC_OVERLOAD, clearly put a lot of time and attention into this creation. Then I remembered: Yogscast thrives on having both an audience and friends to play with, and I have neither, so maybe Drink More Glurp wasn’t meant for me.

Don’t get me wrong: there is a ton about this game that’s fantastic. The concept, for example, is pretty hilarious. Aliens have been watching the Olympics for years, complete with the massive number of ads and sponsors, and have now gotten their wires crossed that the games exist purely for the sponsors (or are they more observant than we are? ohhhhh). Anyways, they decide to create their own set of summer games, but the aliens have different anatomies and priorities than we do. Namely, they have freakishly long arms that do way more than our arms do. Not only can they run with them, they also jump with them, and sometimes fire random projectiles out of them, as well as being able to grab things like normal appendages would. Completely turning the sporting world upside down with different takes on sprints, throwing, targets and other wild ideas, it’s the ultimate in intergalactic competition, and a total tribute to the overlords at heart: Drink More Glurp! 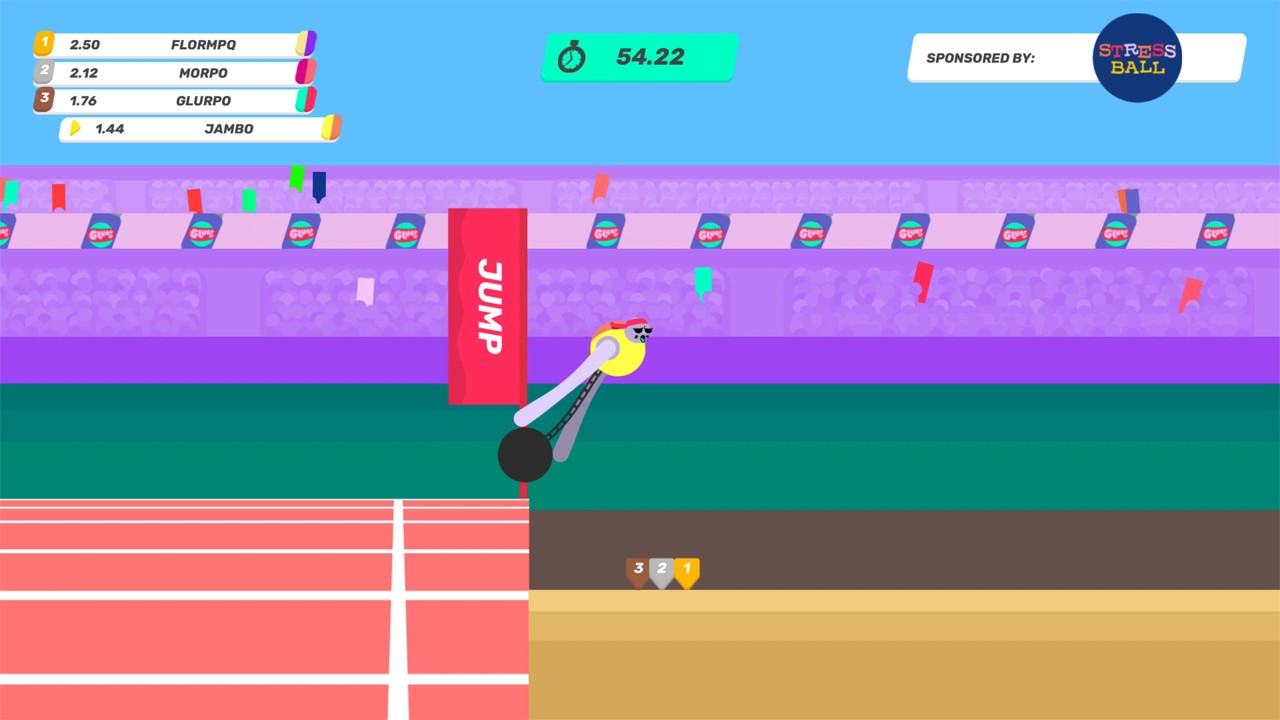 Drink More Glurp is, at its heart, QWOP in party mode. You have a bunch of games, more than 20, that all ascribe to some kind of aspect of a summer sports session. You’ve got makeshift hurdles, a hammer-esque toss, hitting a target, trying to fly through the air with a ridiculous jump, and others. However, as I mentioned before, the aliens in this game all have elongated arms that become their primary mode of transportation and interaction. Most of the games need you to move the joysticks around for the left and right arms respectively to create traction in a windmill-like fashion. There are also plenty of inclines and obstacles, which then require you to either grip onto them with the separate L/R shoulder buttons, or sometimes attempt to squeeze yourself into a tight space to get through. More than once, you’ll be asked to grab and throw things, which, again, takes a bit of mechanical intuition to figure out, and even more to properly succeed. Each of the events has predetermined times/distances in order to medal, so you can see what CATASTROPHIC_OVERLOAD considered for minimal effort needed in order to place, and also how very, very far off you are from all of it.

Now, it should be noted that Drink More Glurp can be played in single player mode as well, so players need not totally lose heart when it comes to getting your solo sport on. Not only are the individual events a good chance to practice and also figure out what the hell you’re supposed to be doing, it’s also a great way to unlock cosmetic additions if you’re looking to make your alien avatar look a little cooler/cuter. Don’t get me wrong, I love the graphics as-is, as the roundness and bright colors adds to the silly and fun atmosphere that’s inspired throughout the game. There’s also a good amount of avatar customization from the beginning, so you don’t need to be worried that looking different is only achieved through relentless grinding. But if you’re planning to spend any large amounts of time on this game, then it’s worth seeing how exactly you run in the Crash Test so you can unlock the airplane affectation. Seriously, if you’ve bought the game, you’re planning to play it with friends, so you might as well add some extra detail to the whole ordeal.

Anyone viewing this probably has some idea in mind, but it needs to be expressly, strongly stated that Drink More Glurp is a game for many people. More specifically, this is a game for a bunch of people within the same room or building, which makes it incredibly not ideal for the current climate. The game boasts a whopping 20 players for the party mode, but it fails to mention that the whole thing is a controller pass-a-thon, so twenty folks need to have their hands on a single controller (which makes sense, since there’s no way you can do this with a single Joycon). The entire joy and excitement of the game comes from feedback, be it positive or negative. If you’re doing well, there’s a rush of knowing that you are somehow able to attune with the crazy control format and your friends/family are cheering or possibly shouting in disbelief. If you’re doing poorly, it’s a chorus of laughter that accompanies your alien furiously humping the ground instead of moving forward, and the whole thing is outlined by your own reaction to the experience. Players who can relax and take defeat with a smile will enjoy the game, especially being able to laugh at the nonsense that takes place. If you have a friend who rage quits, don’t let them near this game. The likelihood that you’ll need a new controller because some Hulk couldn’t stand not moving an egg in a shopping cart well is also high. 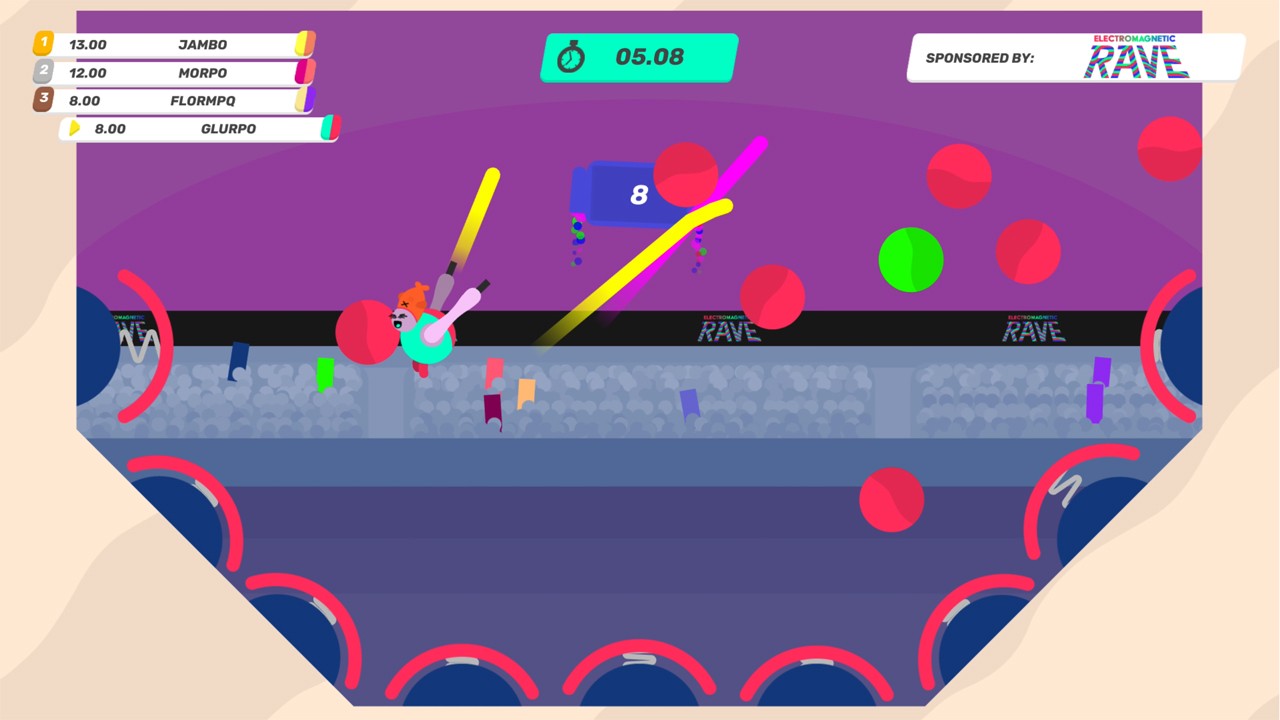 This game wasn’t really for my kids, and that’s totally understandable. There’s nothing inappropriate about that, and they thought it was funny when I was playing and flailing, plus they really dug some of the fake sponsors that were interspersed throughout (some really clever designs, I gotta say). But Drink More Glurp takes patience and sometimes intuition to figure out, and children who aren’t great at video games aren’t going to magically gain understanding in a title that is inherently obtuse. Keep that in mind, because anyone buying this game right now is probably doing so for their family and some kids are just going to have a bad time.

All in all, Drink More Glurp is a funny, interesting and unique title that I’m probably never going to play again. There’s no online play, and the thought of inviting anyone to my house right now scares me more than words. It’s cool to see, but you need to watch someone in person to really experience the frustration and the triumph that comes from figuring out the path to success. If you’re a streamer or have a good group of people living with you, then absolutely dive in, the price is right and it’s a spectacle to behold. If you’re looking for a solo endeavor, you need to go hunting elsewhere.

Silly and unwieldy, Drink More Glurp is a great idea packaged into a fun game that really needs to be shared in order to be enjoyed.