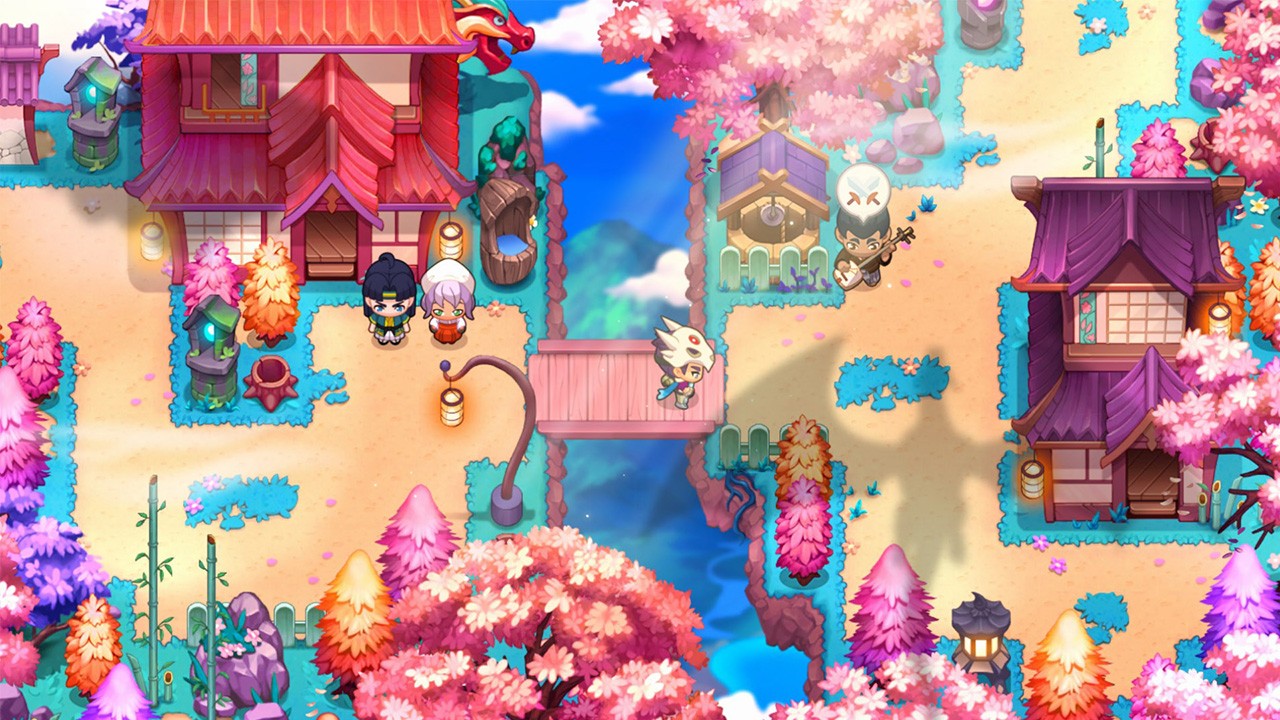 It’s really hard to tamp down exactly what it is that makes Pokemon so appealing. On the one hand, when the games were released back in the mid-90s, it sparked something in players that hadn’t been present before. A game that was openly grindy and time-consuming, asking players to get 150 monsters for no other reason than “that’s the game,” and unabashedly admitting several were version exclusive AND you needed a friend in order to get them, or at least two Gameboys, two games and the damn link cable that nobody had. On the other hand, as Gamefreak has improved and tweaked the game and added an impossibly large number of Pokemon to the mix, there is just a nonstop onslaught of complaints and decries. “The game is too easy now, the game used to be better, this game is missing X, why did they add Y,” etc. but the fact is that no one has been able to successfully replicate the formula. Oh sure, people like to talk smack like Digimon is a big deal, but the most successful Digimon games aren’t even in the monster catching formula. And Shin Megami Tensei isn’t even remotely in the same ballpark, regardless of some superficial similarities (plus, totally different audience). So it seems only natural that someone would step up to the plate and try their hand at mimicking the core ideology. After all, if you can’t be Google, might as well be Bing.

Nexomon: Extinction is the newest title to be released by VEWO Interactive, published by Pqube, and is an incredibly polished and well done JRPG with monster-catching tenants. Set in a foreign world, the song sounds familiar, but is a bit different. You play an orphan, growing up in a shared home with other children (some of whom are not humanoid), and you’ve finally come of age and are ready to move out into a new world, possibly becoming a Tamer: someone who catches and battles with Nexomon. However, as an INCREDIBLY foreboding prologue shows us, Nexomon weren’t always amicable to working with humans, and used to be in a bitter, deadly war with them until their main leader, a Tyrant Nexomon (Tyrants are like evil legendaries) was defeated. Also, the prologue seems to suggest that you might, sort of, kind of accidentally doom the entire planet? OH, and you get attacked by a dragon (which is apparently incredibly rare) and have to hide in a tomb with a ghost to avoid being murdered to death. The tone set by the game is incredibly mature, basically instilling in you a reaction of “this is not the game that I thought it would be” from the very beginning. At the request of VEWO, I won’t disclose a lot of the plot points that come up, but believe when I say that paying attention to the dialogue is important because things get WILD 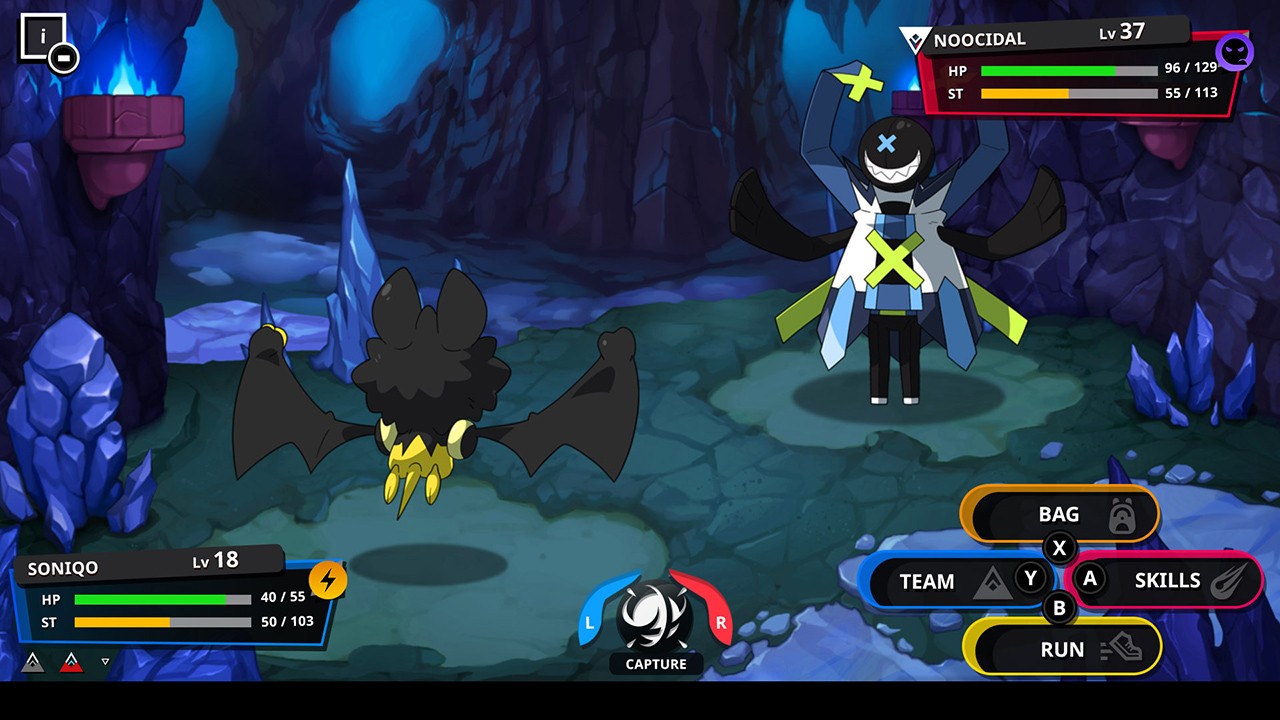 With a game like Nexomon: Extinction, you need to walk a cautious line to look at things in a two sided objective mode. You need to actively compare it to the other big monster catching franchise, and you also need to distance yourself so you don’t get too caught up in a direct correlation comparison. Nexomon has a massive collection of monsters, clocking in at 381 beasts, most of which look very dissimilar from other creatures you have encountered in different games. They all have a very cute, round aesthetic to them, emulating a specific animation angle that puts everything in vain with the Nexomon world. Pqube has helpfully created an online repository of the Nexomon that gives a lot of information and details spoiling nothing for larger, story-changing Nexomon, and also helping to give me an idea of when my different beasts might evolve. Of course, for many players, you may want to skip this entirely and just go in blind so that you can appreciate the builds, the animations and the grand reveal when you finally grind up to the proper level to evolve.

Following along the story that gradually guides you to different guild areas, learning more about Nexomon and catching and defeating newer and more difficult monsters, certain aspects will jump out at you throughout the game. First, there’s very rarely “random” encounters. Even whilst walking through the grass, you’ll only fight Nexomon if you engage with shaking bushes, giving players more control over how much combat they experience. There are still plenty of types and type balances to discover, but there are only nine elemental types (water, ghost, mineral, etc.) and each Nexomon is “pure,” meaning they only exist as a singular type. However, the Nexomon can learn a variety of different attacks, so combat doesn’t devolve into rock paper scissors in terms of victory. Additionally, the combat relies on an SP meter for how many times you can attack, forcing you to weigh the strength and power of a move versus how much SP it might consume and possibly leave you empty. Still, that means I’ll actually use items to replenish my moves during a long battle, so this approach to balance might be better in the long run.

Also, and this is a weird thing to fixate upon, but I sincerely love the writing and dynamics of Nexomon: Extinction. There’s so much needless, ambient chatter in a lot of JRPGs from townsfolk and NPCs, but a lot of what I read about different characters was interesting and, above all, funny. There are a lot of needling jokes at the meta, both calling attention to setting an orphan loose in the world, the fact that certain things are believable (a talking cat just walks around with you) and yet others are not (there’s no way a dragon could have attacked you!). There’s a lot of winks and nods within the world to how absurd things seem to be, but none of them are slathered on too hard or forcibly inflicted on you to a point of exasperation. This is only boosted by the use of these emoticons to help convey the tone of what characters are saying or feeling, and also gives your silent protagonist a bit of personality as well. Oh, and well done on the protagonist customization: letting you choose a name and then one of several avatars was the right level of adjustment I needed without things going too overboard. 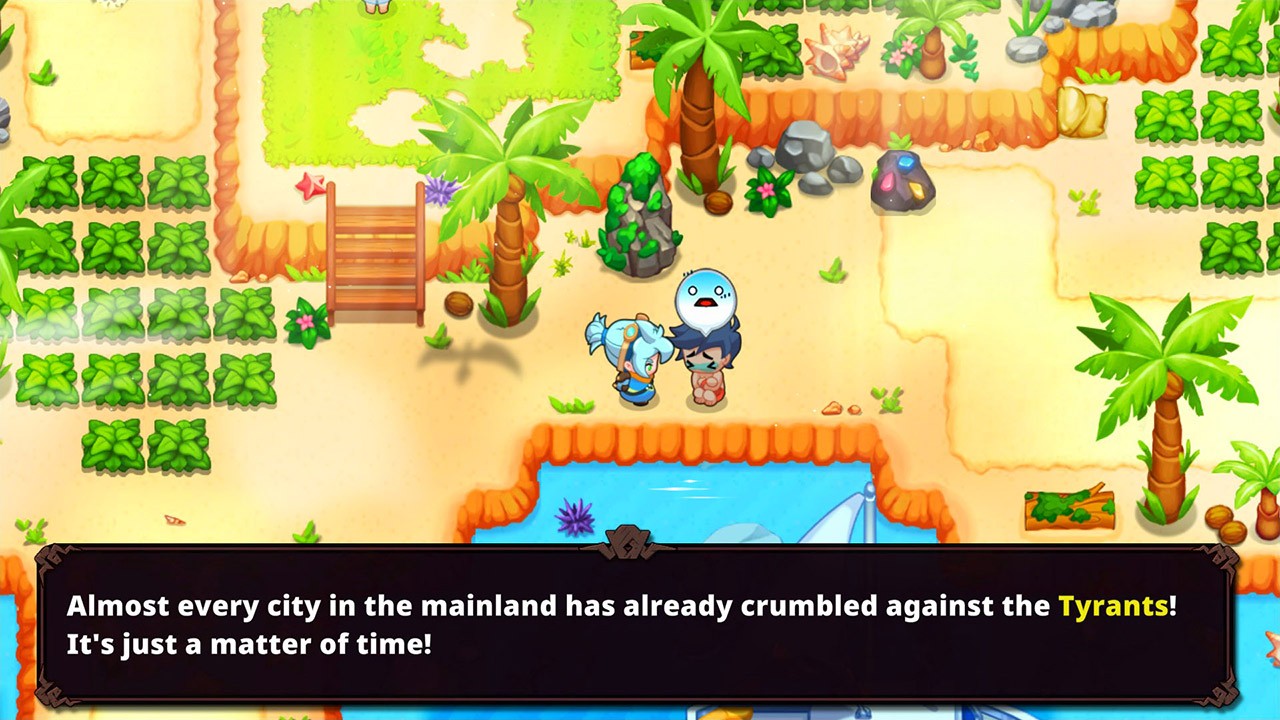 What truly works for Nexomon: Extinction is the fact that they know the source upon which they were inspired and do their best to improve on things based on fan input and their own interactions. For example, levelling up at first is freaking hard. There’s no experience sharing initially, a perk that I’ve grown accustomed to, so you really need to work to survive until you get to a decent level with one ‘Mon. The emphasis is taken away from battle and focused, instead, on capturing, which becomes significantly more intricate. There are foods to feed enemies to make them more trusting, wearing them down through fighting and defence, and even a button sequence that you should follow if you really want to lock down certain monsters. That’s not even accounting for different Nexomon traps or things like that, so it’s freaking cool that there’s this level of detail about the core mechanic – catching monsters – that then spirals outward from there to add additional details to the rest of the game.

Lastly, Nexomon: Extinction is so clean and optimized that I’m a little shocked it’s being released for so many platforms at once. The transition between menus and the main game are buttery smooth, allowing you to drop in and out of saves and your inventory without a snag. You move seamlessly between areas and worlds, save for a couple of small transition animations to help hide the redrawing and the recreation of it. There’s this effort put into this 2D game that really puts recent 3D games to shame because there isn’t a hiccup to be seen in fighting, evolving, catching, running, entering buildings or having massive reveals happen. It reminds me of the best times that I had with games on the Nintendo DS, done up in richer colours, a more robust soundtrack and an even bigger world to explore. For so much game to be available for a less than AAA price…people might be sweating bullets over this in a perfect world.

However, at the end of the day, Gamefreak and Nintendo don’t need to worry because the loyal fanbase of their IPs won’t turn their backs collectively ever. So that means that Nexomon: Extinction can exist and be a goddamn diamond of a game – virtually flawless in execution and presentation – and people will still have plushie after plushie in their homes from another series. So, having said that, if you have any love for the older games in the Pokemon series (we’re talking Black/White and before), then you really should give this a try. It’s difficult, but fun, strategic but simplistic, and has an array of endearing, interesting and sometimes shocking monsters to encounter, fight and figure out. There’s so much to see and do, and I’m many hours in with many more to come. It’s a great game to pick up and play, drop the weekend into, and still have so much left to do. I actually like my starter, Masquiti, better than I do the last couple of starters that I picked for the other game (sorry Grooky), and there are some sincerely adorable and useful monsters to find. There’s no new core game from Gamefreak this year, just a DLC. Why not take a gap and enjoy the world of Nexomon? You just may find yourself sincerely enjoying this blatant, but professional homage.

The best Pokemon game this year isn’t even from Gamefreak, imagine that.