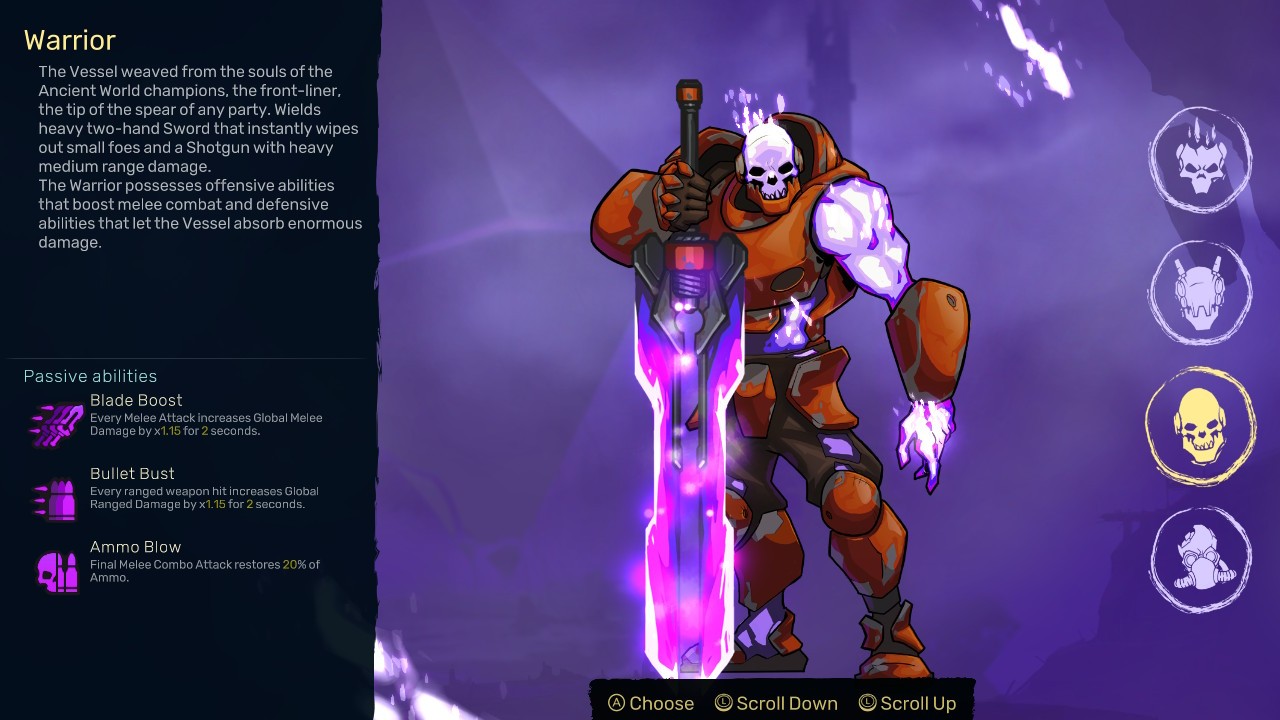 The roguelite is the ever vanishing promise of a game that is destined to either take months or minutes of your time. Whenever I see this subgenre listed, I get wary. I want to know that this next game will be one that draws me in and keeps me coming back time after time, and I want that in a way that can barely be comprehended. It’s been years, and I still fire up The Binding of Isaac because there’s more to do. Every time there’s an update for Dead Cells, it moves to the top of my play queue (and there was just one, so that’s part of my life now). Even Atomicrops is a consistent go to for me because the difficulty curve is insane and the promise of a better and better set of stats (and cats) is intoxicating. I love procedurally generated, roguelite/like games.

Collapsed, on paper, seems like a perfect addition to my fine collection. Sporting a promise of a skill tree, crafting faction, randomly generated stages and tons of loot, this action platformer has potential oozing out of every pore. There isn’t really a story to speak of: the world has ended and you’re one of four types of Hunters who have been awakened to go down to the mutated wasteland that is Pandora. Head down to collect loot, gather Nether Shards, and do battle with a lot of large, angry monsters that wish to do you harm. The upside and downside of being a Warden Vessel is that you are completely expendable: your death only affects the progress of the Hunter, not the game. All loot and items that you find are brought back to your base, and all skills you unlock will continue to be available across different incarnations.

Some people are already talking about this game as a successor to Dead Cells, and we need to nip that in the bud immediately. With Collapsed, you have one of four character classes to choose from, each with individual strengths but, ultimately, are very similar. You have a ranged attack that relies on ammunition, a melee attack, a double jump that also incorporates wall clinging and vertical climbing, and a dash that gives you temporary invulnerability. The wall climb is something I had to get used to because most modern titles just have a wall jump aspect, but this literally lets you act like Spider-Man and go straight up with no momentum prior. Your main objective is to discover portals that are scattered across each of the stages, with some false portals that give you loot and the true portal that brings you to the next area. Eventually, you discover bosses that need to be dealt with (they’re described as “Anomalies”) and killing them gives you a bit of crafting/skill upgrade loot and passage to the next area. Lather, rise, repeat to your heart’s content, which may be very short if you were in a similar boat as I was. 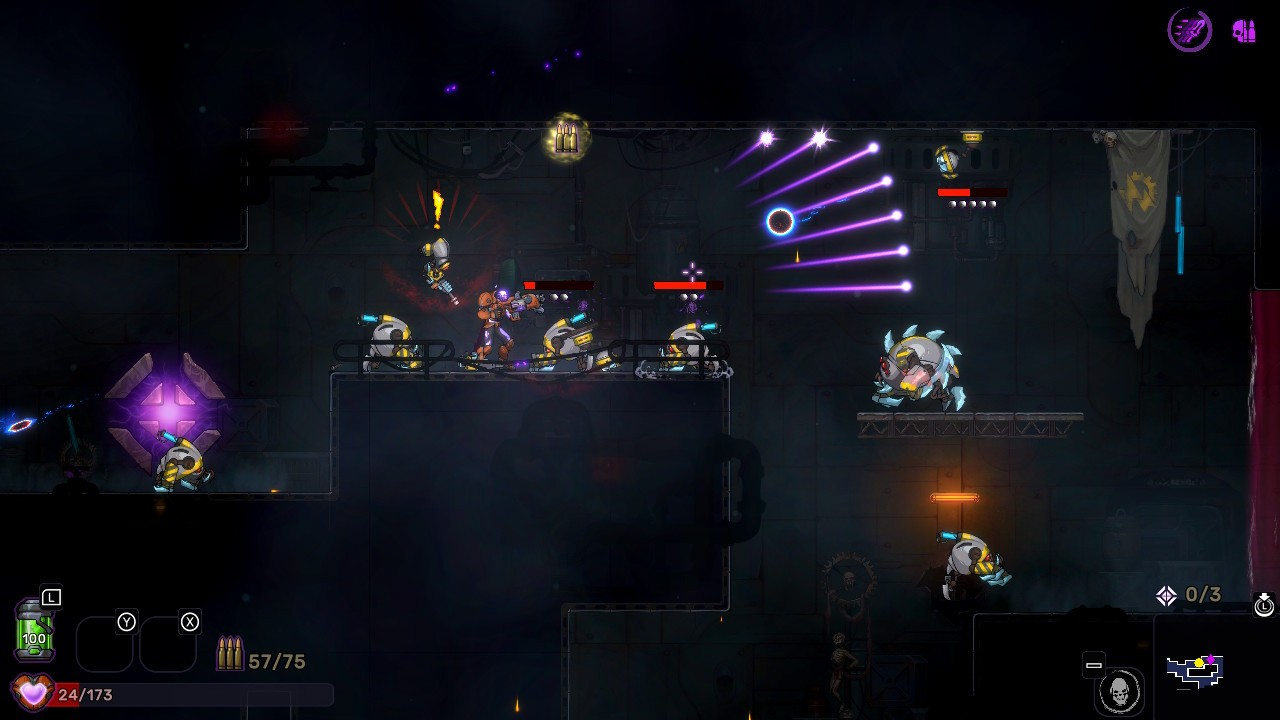 Out the gate, the game feels pretty incredible. Though I was skeptical about the mapping of attack buttons to the shoulder pads, Collapsed does a good job of creating intuitive flow lines for moving between areas and forcing the player into a situation where they need to stay nimble and not just hunker down for fighting. There are a vast number of enemy types, and they have a good combination of attack patterns that you need to figure out. There are hulking beasts that carry shields that can be invulnerable if you aren’t good at dashing, there are floating horrors that shoot homing spores at you, and there are your standard issue humanoid “mutants” that also come equipped with weapons and do different levels of damage and are different levels of annoyance. The levels connected together very well, allowing players to explore, find portals, and move on to the next areas with nothing being abrupt or stilted. It also gives players an opportunity to view and appreciate the world of Pandora, which has many biomes and different versions of a shattered, post-apocalyptic landscape.

There is loot: loot is certainly not an issue within Collapsed. Enemies drop stuff all the time, particularly the green ooze that acts as a reserve healing potion (drink it frequently and keep the HP up), additional ammunition (fire at will, I never ran out of bullets) and the Nether Shards, which act as skill point currency on the skill tree. There isn’t EXP or levelling, per se, but investing in the skill tree gives your character stronger attributes and, cumulatively, aids in their future. The larger loot – equipment and such – comes from the portals and errant treasure chests, and each item is, essentially, a slot-filling enhancement to whatever your hunter is wearing. You can improve the gun they wield to give it better elemental damage or different effects (acid bullets, bouncing bullets, etc.), you can add additional elemental resistances and HP to your armour, and you can up your melee weapon to have better min/max damage and (you guessed it) different elemental damage. If you end up with too much loot, you can bring it to a crafting area and turn it into something new and different, and thus the wheels begin to wobble on this train.

Personally, I’ve never been a huge fan of crafting, but I understand the draw and the appeal. Therefore, intuitive, logical crafting is at least appreciated, even if I’m not someone who strives to use it. Illogical crafting, by contrast, is confusing. You can take three random loots and turn them into a different, possibly stronger item, and it doesn’t make a lick of sense. Too many pickups of the bouncing bullet ammunition. Level 5? Then you can mash them together to make…a new pendant that increases your melee damage as long as you’re in the air! Does that even remotely check out? Not in the slightest, but it’s one of the first things I did. Initially, I was elated because I hated getting bogged down with additional items (you can store them at your base to a point). But I would have rather had small loot turn into larger loot: three common bullets morph into one larger bullet. It’s possible, but you need to unlock the strength to do that first, so, prior to that moment, it’s just alchemic mishmash for whatever you think *might* happen next. 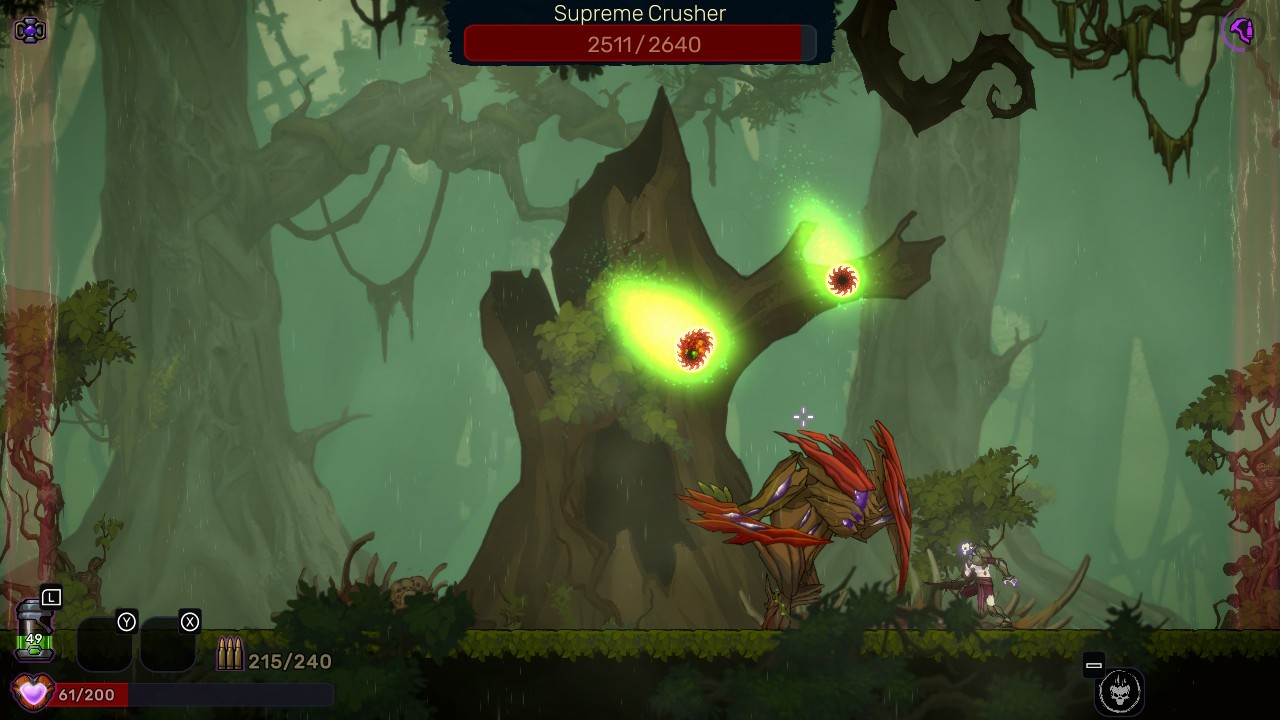 Additionally, the skill tree idea is a bit boring in execution. This is again one of those moments where the team of Glaive Games was looking at Collapsed and thinking of a unified way to help advance the progression of the world for everyone who might play. The result is that the skill tree, though limited in some ways, is open to every player and adds those benefits to every player, whether or not they want to. Say you’re having a shared game with a family member. In theory, as Collapsed is Co-op, having a burgeoning skill tree that everyone pulls from means that the upgrades that Nether Shards afford are enjoyed by all, thus making progression easier. If, however, you’re a household of gamers who enjoy forging their own paths, it could be a tad buggy unless you make a point to create separate Nintendo ID accounts, which you probably have if everyone’s sharing a Switch. So separate progression and play isn’t a problem, but making a new character on your account feels silly when the whole damn skill tree will be unlocked from the beginning. It’s like a new game+ whether or not you intended on it.

Last, the game gets just a tad repetitious. What really makes some roguelites stand out is the ability to have a ton of diversity not only in the worlds, but in the play style. For Collapsed, the only time you have to vary your approach to enemies is when you get to a boss fight, and even then it works itself out in a few seconds. Mostly you listen to what your character’s strength is based on their bio (melee, ranged, whatever) and go from there. If you picked the dude with the big sword, invest in the melee and whack away. If you picked the Hunter who’s most at home with bullets, big surprise, shoot to kill. You move between some cool worlds, and I like the enemy design, but it’s all the same song and dance after the first major encounter. Fire, collect, repeat. The world has ended and you’re left doing the same stuff over and over.

Collapsed is by no means a bad game, but it doesn’t grab me in the same way that some other procedurals have. With a vast number of options at our fingertips, it can be difficult to get lost in the shuffle. Unless Collapsed can find something new to bring to the table, this very interesting but rather vanilla roguelite will become home to a dedicated few…and not many others.

Unless Collapsed can find something new to bring to the table, this very interesting but rather vanilla roguelite will become home to a dedicated few…and not many others.